Downtown Boys played the Middle East last Thursday night, and due to their relentless energy, they did not ride in on a wave, they rode in on a storm. This year has been a wild, distressing ride, and there was truly no better way to close it than with Providence’s best political punk band, Downtown Boys. 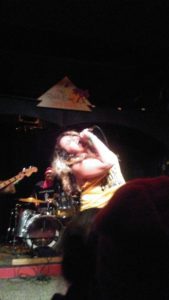 The show opened with Thee Cavemyn, a five piece with two drummers, which was really just plain awesome to watch. Next, the lead singer of Funeral Cone, who are “a punk band from New England,” reminded the crowd that this night was the anniversary of John Lennon’s death–which led to a few shouts of “Fuck John Lennon!”. The next song ended up being about The Beatles. The rest of their set was mesmerizing as the lead singer jumped all around, on and off stage while the band played some solid tunes.

The last band to play before Downtown Boys was Dent. The band was unfortunately playing their last show (and this was unfortunately my first and last time seeing them.) The small venue really became packed when Dent started their captivating set as the lead singer, Lane switched between  singing and powerful screaming. One of their last songs ended with her crowd-surfing throughout the audience. They were a perfect opener for the self-described “bilingual political dance sax punk party” band, who started around 11:15 and rocked until well past midnight.

Luckily, we were able to hear three new songs that night (new album soon?). They opened with one of the new songs, which in true Downtown Boys fashion, was just as powerful and energetic as anything off their last album, Full Communism (released in 2015 on Don Giovanni Records). The song regarded the stark, opposing sides of our bipartisan system. Lead singer, Victoria Ruiz, continuously screamed into her microphone “a wall is just a wall.” 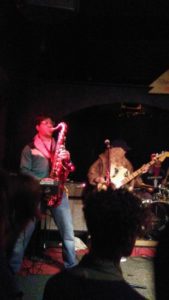 The best part of Downtown Boys – the sax

“Wave of History,” one of the band’s most popular tracks, was the next song, which really got the crowd worked into a frenzy. Ruiz has an incredible way of truly connecting with everyone in the audience as she leans into the crowd with great vigor while she sings each lyric. Between each song, Ruiz makes mini speeches about what the following song is about, which inevitably makes the audience more and more fired up for each song. 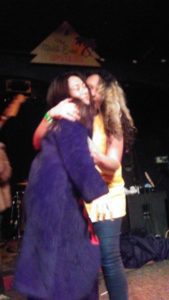 Ruiz and Lane from Dent

The lead singer of Dent, Lane, came up on stage for “100% Inheritance Tax” to sing with Ruiz as they chanted “ONE-ZERO-ZERO.” The band continued on with their songs, some in English and some in Spanish. Downtown Boys, who are named after a Bruce Springsteen lyric, are the perfect dichotomy of an angry political band and an upbeat, playful punk band with a killer sax that truly feels like a punk dance party.