You walk into this room and immediately know: this is a sick animation show. Was it the film hanging in the window? the TVs all around? Probably. Is it the furniture that looks like an insect you might find in Hannah Barbara’s nightmare? Most definitely. But also, this is just a really well designed exhibition that transports you out of your head space space for your as long as you’re immersed in it. IN FACT, I’d recommend that you grab your lunch in Back Bay and then spend a full afternoon immersing yourself in The Skin Has Eyes. There’s enough in here for a full afternoon. 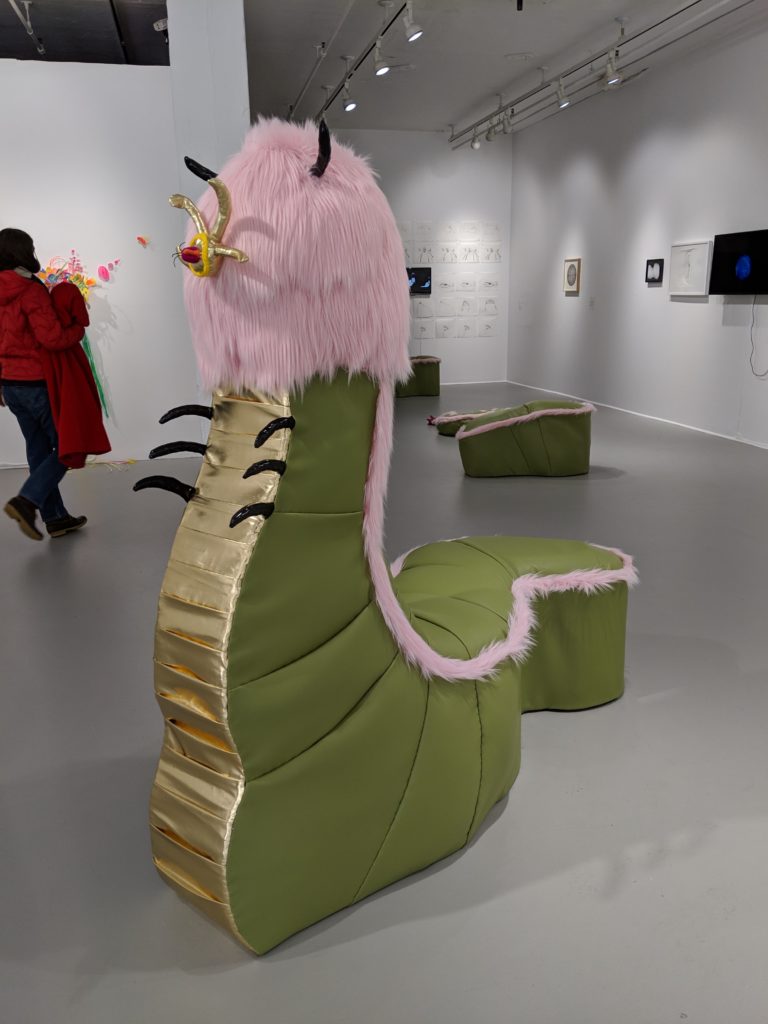 One of my favorite components of The Skin Has Eyes was how each animation was grounded with a physical object that either enhanced or explained the rest of the piece. The matching furniture and pillows interspersed between the animations set the tone for the exhibition immediately. The exhibition links animation to the weird, the fun, and the childlike and each work included in the exhibit is all of those things, but it is not limited to the simple or easy parts of being childlike or fun and presents complex and well developed work while retaining those qualities.

This physicality gave each piece an extra ‘oomph’ for you to interact, an element that isn’t always there in an exhibit which would otherwise be comprised of television screens. Maya Erdelyi, the curator of the exhibition, said this component came from her background in Fine Arts where 2D and 3D work are often intertwined. She explained, “I see how many other animators also came to it from these other directions (sculptors, painters, etc), and also how much gorgeous physical work gets made (100’s of drawings, artifacts, puppets, palimpsests, etc), that will never get seen. Because the main experience of seeing animation is on a computer or big screen there is all of this gorgeous tactile/visceral magic that doesn’t transcend the screen. I wanted to show that.” 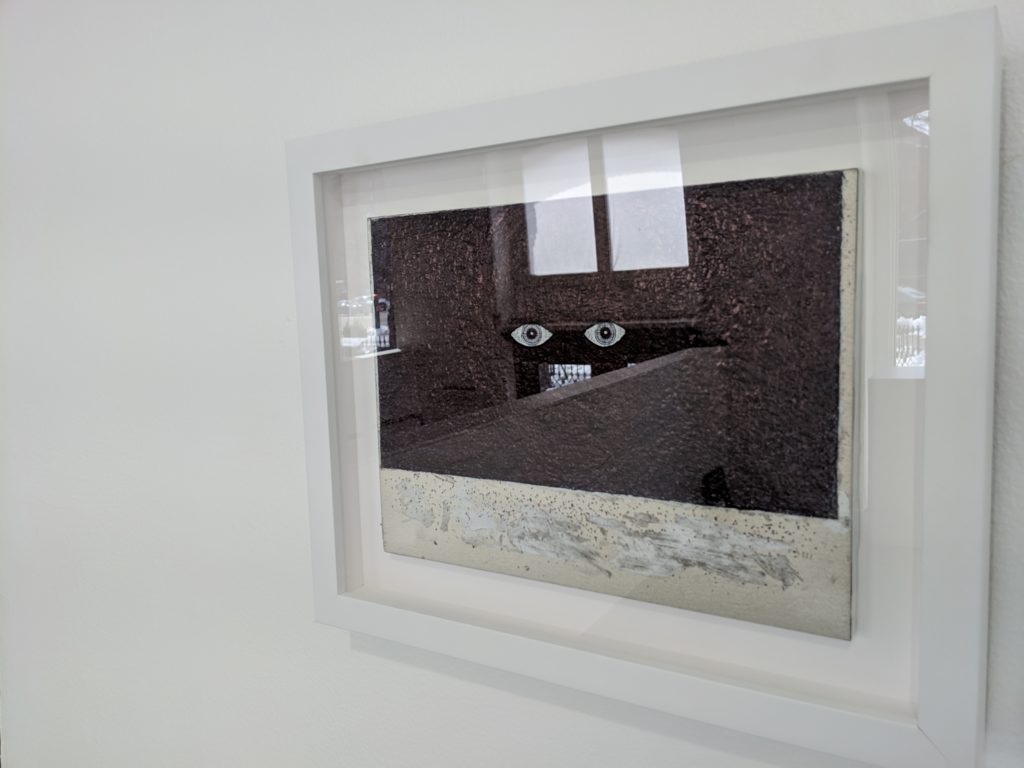 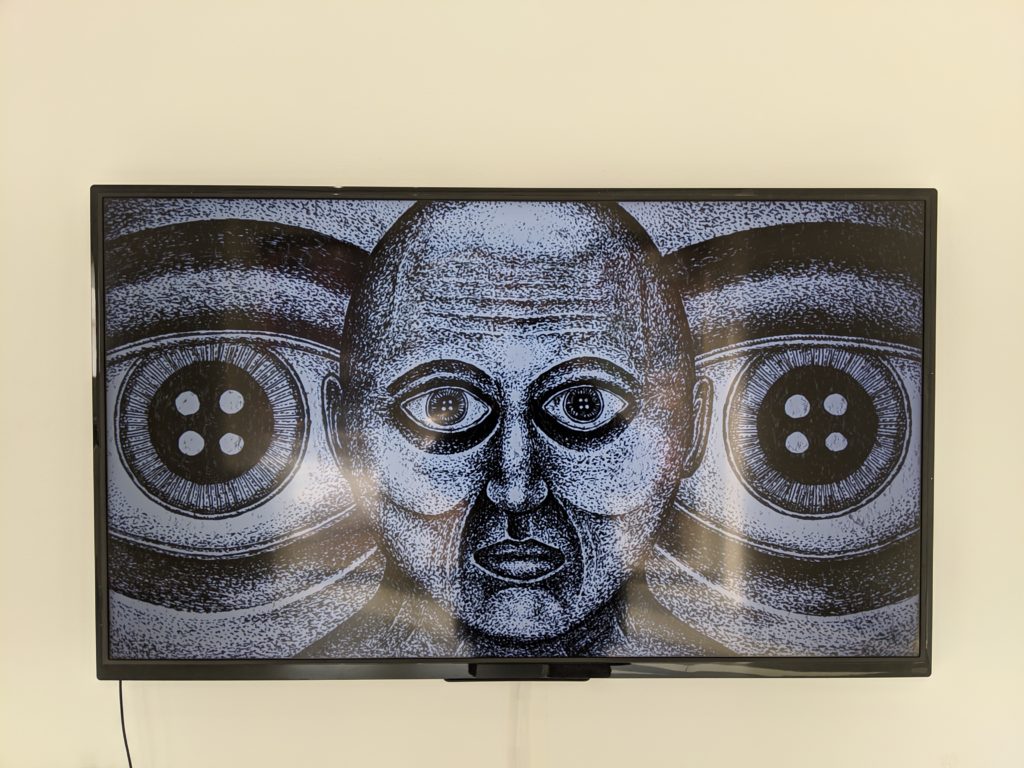 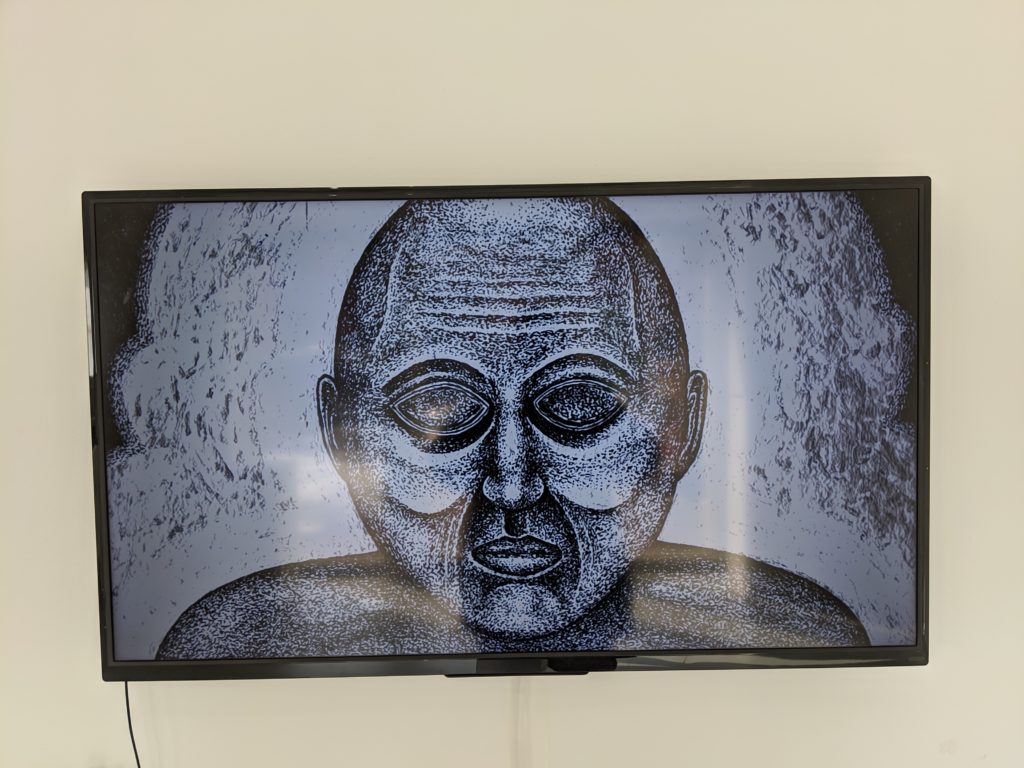 Front and center was Jake Fried’s “Brainwave”. To get to the large animated TV screen, you have to pass by a more unimposing framed paper work with the unmistakable sheen of bic pen ink winking back at you. His animation is the result of pen and white out reworking the same image 1,440 times. This is all explained on the placard that’s the last thing you get to, visually, and it all unfolds from there.

Unlike say, the reworking animations from William Kentridge, the permanence of the pen gives it a very specific and psychedelic style. The binary on/off of the ink is jarring as it disappears and reappears at a dizzying speed giving no middle ground. Jake Fried kept certain elements constant within the animation, the eyes and the outline of the figure and that keeps it grounded as the rest of the design elements fluctuate around it. It’s as if you were locking eyes with someone in a different dimension but these constant anchors are the things that keep you hypnotized to the screen. 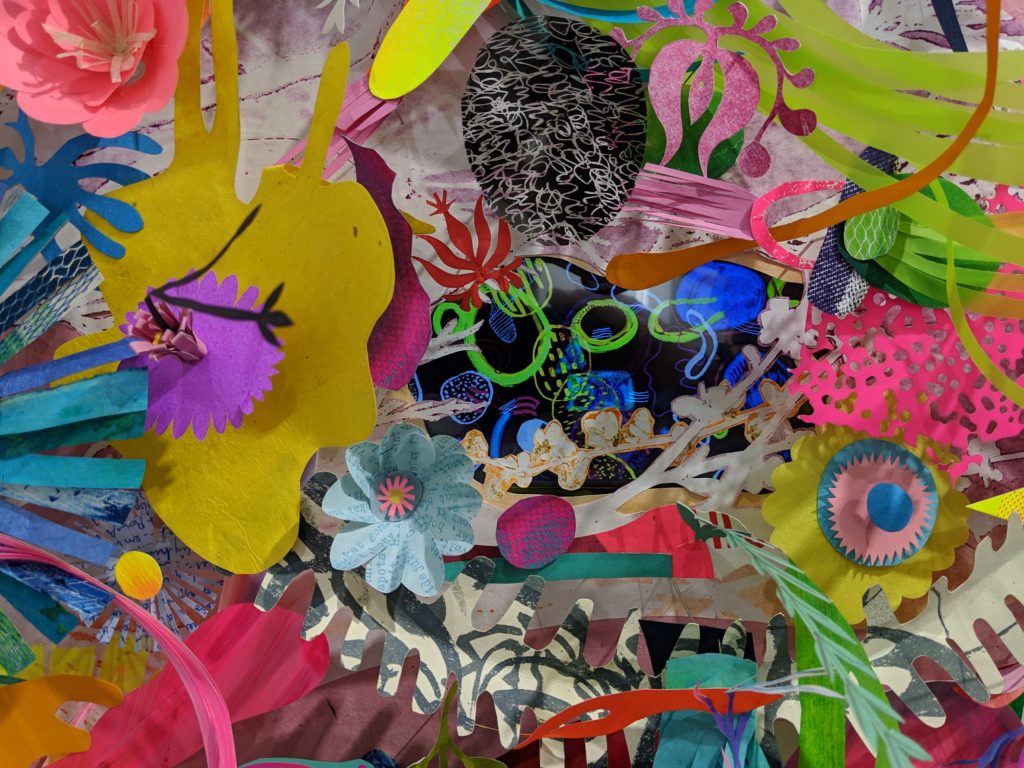 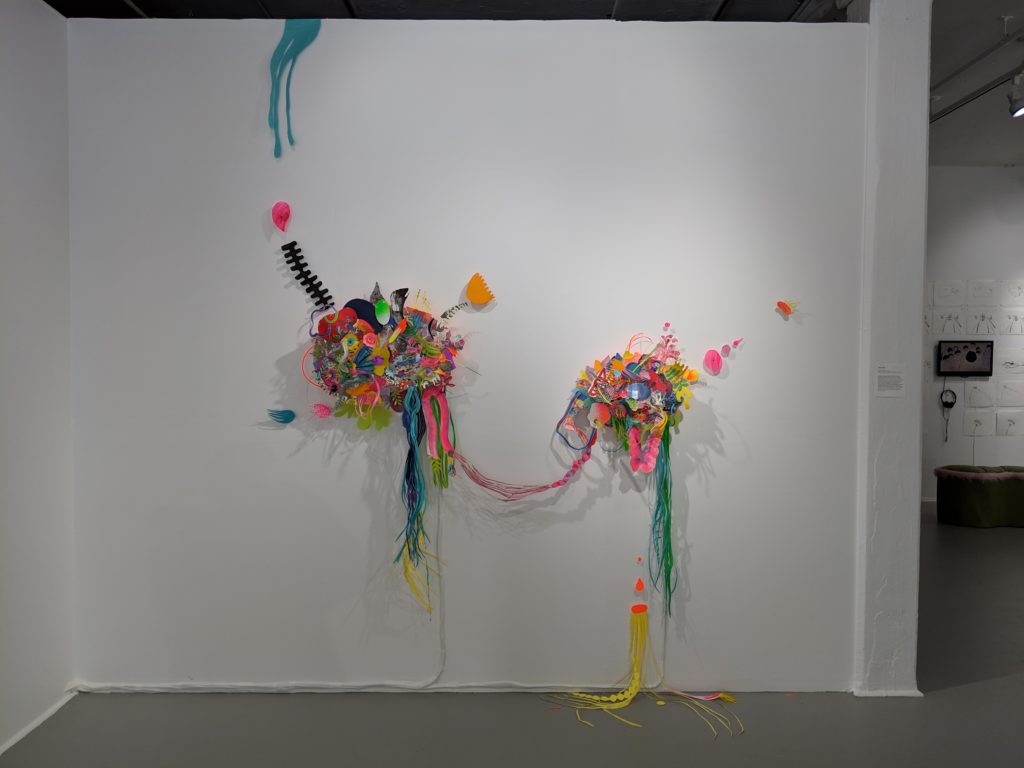 The piece that integrated sculpture and animation most fluidly was Maya Erdelyi’s Ma Femme Maison. The screen was in the very interior of an installation composed of cut-out shapes on brightly colored paper. The paper felt as if it might be the most animated element, with it’s complexity of different shapes, vibrant neon colors, and general busyness. As you dug through the visuals and the found the interior TV screen, the animation felt like the heart of the piece.

Much of the paper shapes felt organic. Not just the organic that means ‘natural’ but organic as in depicting organs. This small, hidden away animation pumped out the energy to the rest of the piece. The shapes were varied and called to mind organs, flowers and other natural shapes but are delightfully unspecific. The way they’re composed suggested a weight as they droop down like a good succulent plant or a badly disemboweled body. All of these elements seem to be working together to illustrate specific themes of growth, nurture, energy and content.

There’s a great use of the negative space of the wall between the clusters of activity so that it does not overwhelm the viewer.  The connections between them keep you moving throughout the piece as they seem to flow into each other. It’s a really fun piece that sticks with you. 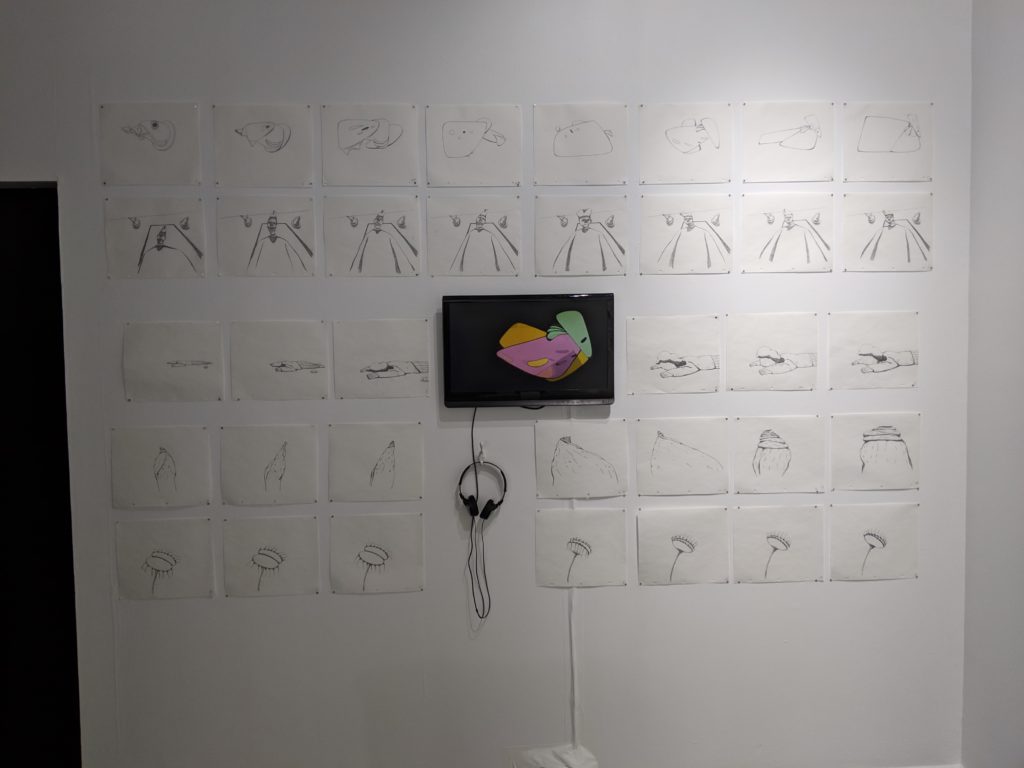 Amanda Bonaiuto took a more narrative approach, presenting the animation alongside the drawings used to make it. A story unfolded on the screen with interesting disjointed perspectives and actions. The physical drawings added an element of mark-making, as you could see the physical pencil marks on the drawings that get lost in the animation process. Amanda had an interesting way of drawing objects and people that felt wholly original.  The perspectives they’re drawn from and the distortions on their form were complex and emotive, so it was interesting to see how they came to be. 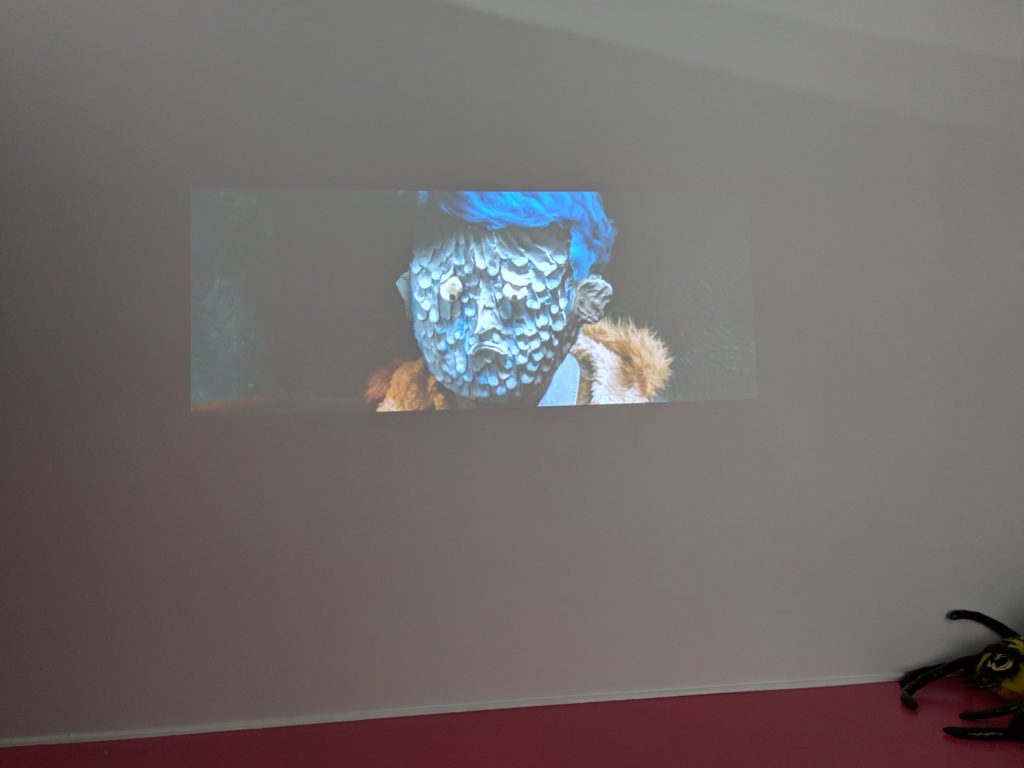 In the back of the exhibit, there’s a (close to) two hour reel of animations running on a loop with short segments from about 20 different artists. The room has a bench to sit on, or you can pop a squat on a mound of pillows shaped like monsters. One animation by Caleb Wood (aptly entitled Bird Shit) included photos of bird shit arranged to look like a seagull flapping it’s wings. Another work titled Facing It by Sam Gainsborough combined real actor bodies with clay-mation faces performing mundane activities that the expressionistic faces added extreme degrees of emotion that you can read into the more day-to-day nature of the scenes.  Facing It is like Edward Munch was painting scenes in a David Lynch movie by way of Mr. Bill. This is where you can really spend some time in the exhibit, so make sure to allow yourself a few hours to lounge around in here. 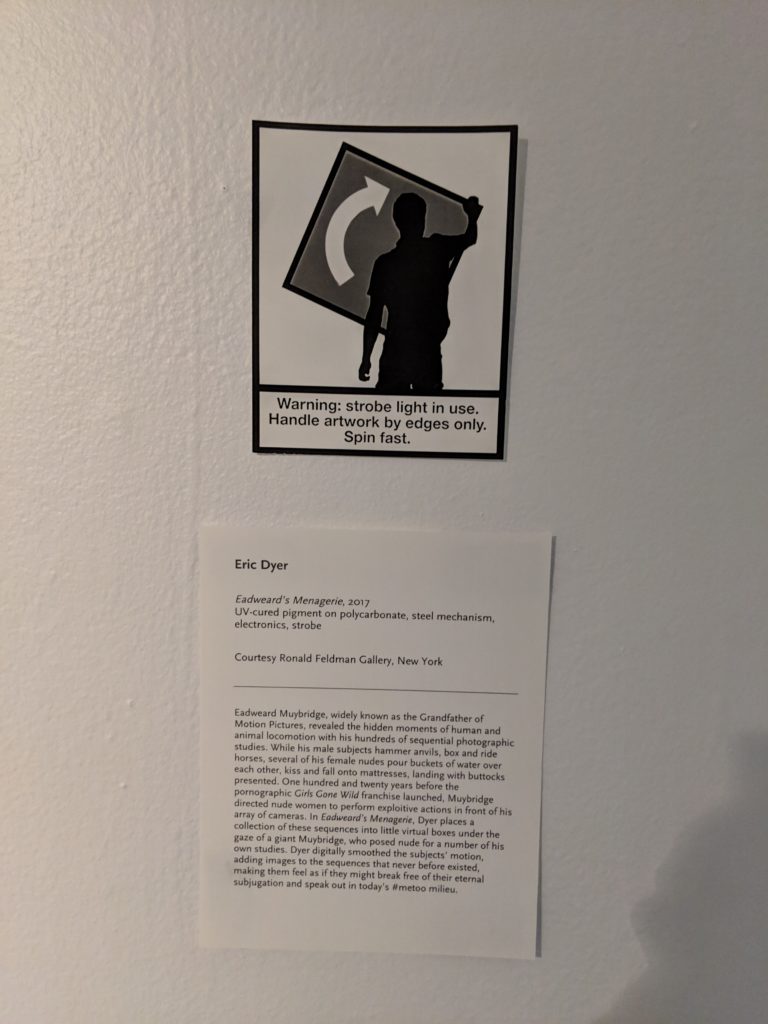 My favorite piece of the exhibition was Eric Dyer’s Menagerie, and guess what? It doesn’t translate to photo so you’re going to have to get down there to see it!

You enter a separate room where you see a large square image which you’re instructed to spin (See the instructions above!). Once the spin reaches the optimal speed, a strobe light starts activating the animation, causing you to basically be immersed a moving Hieronymus Bosch painting. There are hundreds of nude figures crawling, climbing, and having their balls exploded all in a single animated image. Now, you may be SCREAMING at the blog right now, “HEY TWO JERKS, THAT SOUNDS GIMMICKY! Why’s that gotta be your favorite?!” And, yes, it’s a piece with processes that are immediately in your face. That can be kind of gimmicky, but in this case Dryer is using those processes as a vehicle to get to a well-formed and interesting experience. The piece calls back to the origins of film, with the clicking of the strobe going off, sounding like the film in a projector or the spin of a viewfinder, and the antiquated nudes feeling like an old stag film; Menagerie felt old yet modern. The scope of the large number of writhing figures took any eroticism away, allowing you to just take in the piece as a whole instead of the individual components. I was immersed.

I asked Maya about how she chose this diverse and fun group of artists. “I chose artists/animators that were working in this space between fine art and animation–and also quite simply–that delighted and astonished me and that I respected in the field.  I wanted to highlight experimental and independent animators because they are not as well known as the big animation studios and most people will never see this kind of work unless they stumble upon it online or at a festival. I was also thinking about showing a broad & diverse approach to animation, along with artists that are more established and those that are emerging in the field. I also wanted to bring to light that right here in Boston and Providence, there are incredible animators hiding away in their studio spaces. Although I’m from NYC and studied in LA I wanted the show to have strong roots in Boston–where many of the animators in the show actually are from or studied (even if they live elsewhere now). I decided to not do an open call because I already had a big roster of artists and animators that I respected and thought would work really well together in a gallery context. Eric Dyer was my professor at CalArts a long time ago, Sarah Jenkins was an animation student of mine, some of the animators I met at film festivals and others I had never met but did a cold call email to them to ask them to be involved. The thinking was more around showing a really diverse group of animation approaches along with underscoring the strong animation roots and current experimental animation scene happening in New England right now.”

Overall, this was a fantastic exhibit which I highly recommend. And there’s plenty of time left to get down there and see it! The exhibition will be on view at the BCA through April 28th. On the 28th, there will be a closing reception and panel discussion with the artists and curator between 2 and 5 pm. More information on the exhibition and its related programming can be found here.