The Moth is a storytelling event held every third Tuesday at the Oberon. Audience members  who want to tell their stories on stage submit their names into a lottery. Then, names are selected one at a time, until ten stories have been told. The person who is selected comes up on stage and tells a five-minute story.

You know, a beginning-middle-end story, instructs the host, author Steve Almond. “Often times it is pleasing if the end refers to the beginning,” he adds. And it has to be a true story—a “shitty, late-Reagan truth, sort of true.” Stories should also be on theme, and the night’s theme was refugees. 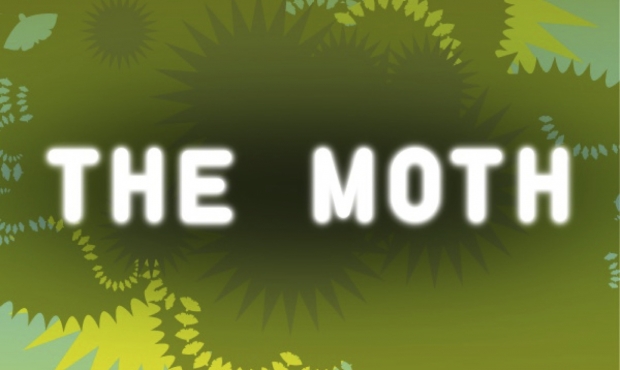 Three tables in the audience were selected as judges. Each story would get one score from each of the three tables, and the winning story would be announced at the end based on these scores.

Before the show began, members of the audience were given slips of paper to write down responses to the question asking about ‘a time that they had to leave their safe space.’ The host Steve Almond read out a couple of these responses in the breaks between stories, while the judges deliberated.

The responses ranged from the absurd, “I ate an egg today,” to the tragic, “As an African American man, I step outside my safe space every time I leave my house.”

Considering the openness of the structure, everyone who came on stage was surprisingly composed and prepared. The first person to take the stage told a story about living with ‘douchey,’ white frat boys. The second told a story about becoming paranoid on a plane trip while high. They were both comfortable and expressive on stage, though their stories didn’t end as clearly as the host may have suggested them to end. The third story was about being stuck in a four-day long storm in the tundra, and the fourth story was about a divorce.

For the fifth—my favorite—a woman told a story about her constant need to leave a place, to pack up everything she owned in a car and set off. She spoke in a rushed way, as if she couldn’t explain herself quite right, and so she tries again and again to explain it from different angles. The story ended with how she successfully treated her Bipolar Disorder with medication.

Although this story, which was essentially watching a woman on stage trying to explain what it is like to be in her head was the least narrative story of the night, I found that it was the one that resonated with me the most.

The tenth and final story was about being in a Kenyan prison for a day. Don’t let the catchy description fool you, this man was strangely both completely comfortable on stage and totally unprepared. At one point he took off one of his shoes.

It was a strange, long, and wonderful event. They we all good stories, but they were also all very human stories, full of striking reflections and personal thoughts.

Everyone one stage seemed to have something to say, some event to describe, and found some way to wrap it up at the end—bow affixed, it became a story. However, the ‘wrapping up’ was never quite story-like. A woman’s moment of reflection on her husband, for example, or a moral about getting drunk with friends. I’m not sure that the stories themselves hit the mark for me, but I guess that the narrative structure is one that we shoehorn our lives into, and not the other way around.

The Moth
OBERON Shows
The third Tuesday of every month!
$10 tickets