The body politic is defined as the group of people governed under a single authority. The most recent exhibition at A R E A Gallery, sharing the same name, illustrates that the American body politic is fractured; however, different groups function together to create interconnected structures. With four pieces displayed in relationship to each other, the gallery itself creates an environment for these interactions to play out.

Here I was faced with timely questions, geared towards putting these pieces in context of the midterm elections, “Is it possible for our identity, or the defining power of individual groups, to be transmuted overnight? Can the election change your interpretive stance after results are determined? Has your perception in the current political climate been altered regarding your fellow Americans?” The works in the gallery weren’t intended to answer these questions, rather meant for the viewer to reflect upon personally. The Body Politic encouraged connections between the pieces on display and my own life. 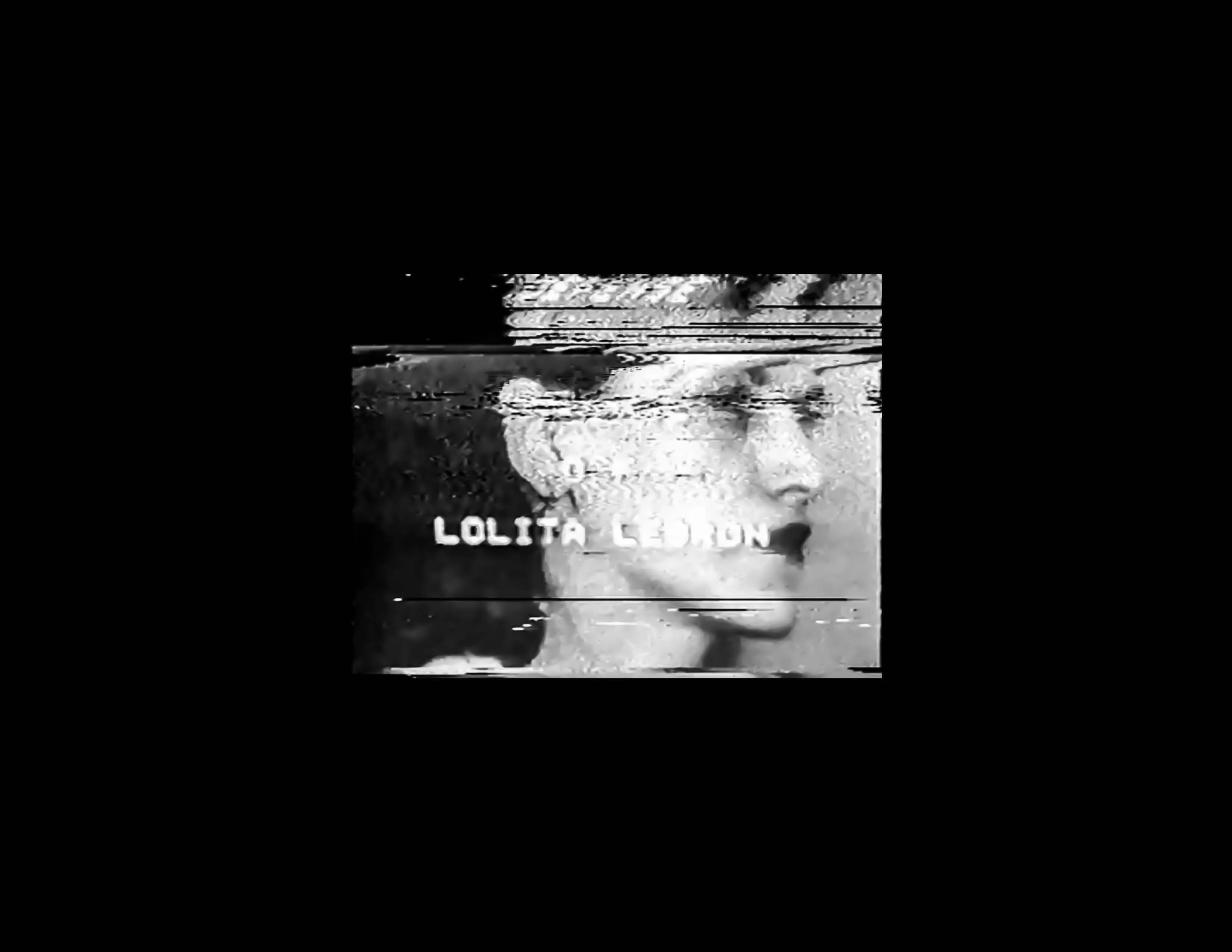 I first noticed Lolita Lebrón: American Bread Terror by Candice Jackson. These plaques, which illustrated Puerto Rico’s colonization and the attitude of the American government, combined archival images of Lolita Lebrón with text from media coverage. Lolita Lebrón was a Puerto Rican revolutionary who lead an incursion on the United State’s House of Representatives in 1954. As she was arrested, she said, “I did not come to kill anyone, I came to die for Puerto Rico!” She was painted by the media as a terrorist, although she was speaking for the voice of her people. She was remorseless for what she did. Through this piece, Jackson urges viewers to examine who the media defines as a “terrorist” while considering the larger factors surrounding such individuals. 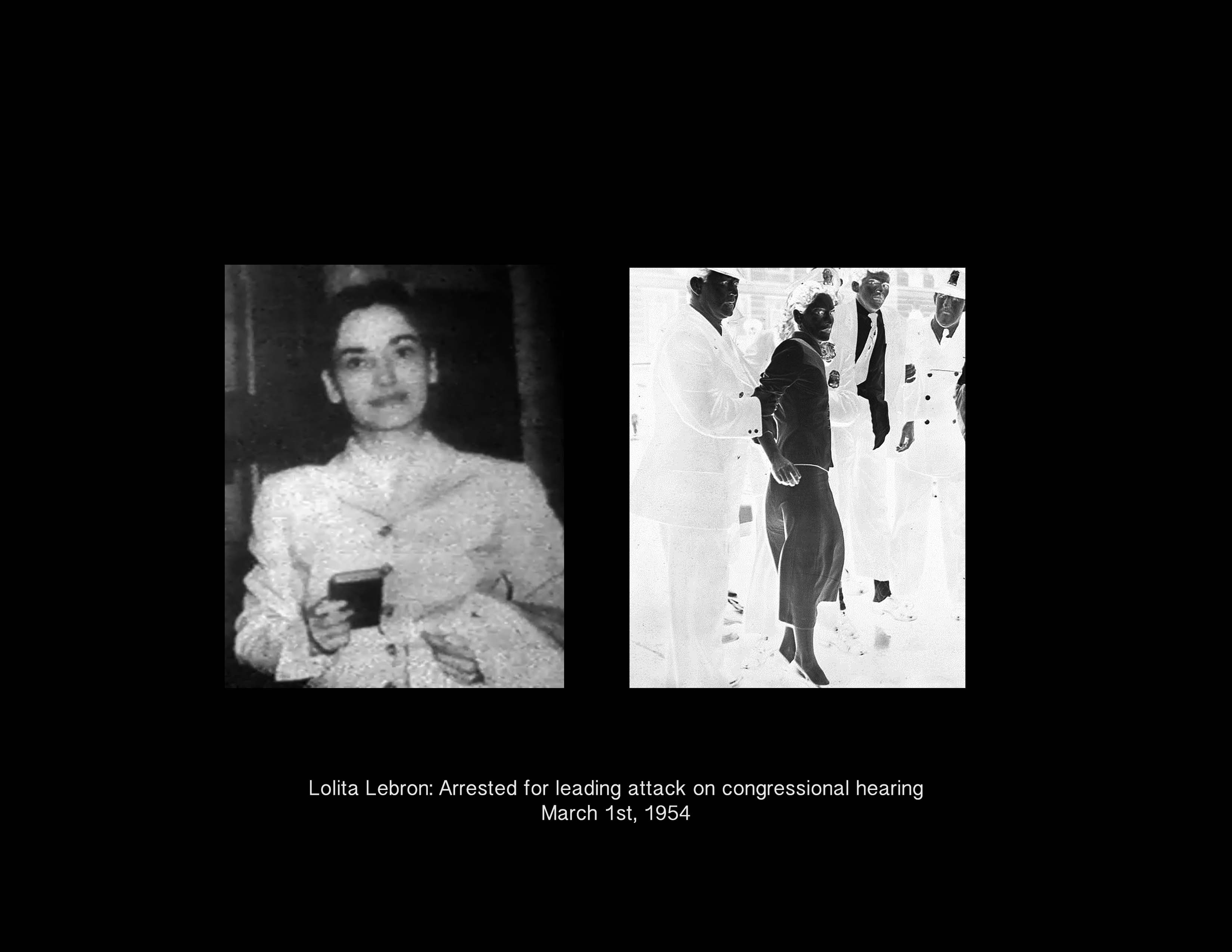 Still to this day, the American government ignores the outcry of the Puerto Ricans. Lolita Lebrón serves as a reminder of the recent casualties of Hurricane Maria in 2017 and the similar response by the American government. Lolita Lebrón shed light on the often-silenced plight of Puerto Rico, and educated me personally on this history of colonialism.

Nearby were the photographs of Brian Ulrich, entitled Dupont Castle, Berkeley Springs, W.VA 2014. The photographs are of two domiciles which are styled like modern day castles. With these compositions, he compares the wealth of these homes to the wealth of feudal lords. Dupont Castle questions the pervasive notion in America that wealth is the only true measure of success. By recontextualizing the images, Ulrich proposes a new perspective on the illustrious goal of home ownership, which for so many Americans is out of reach. 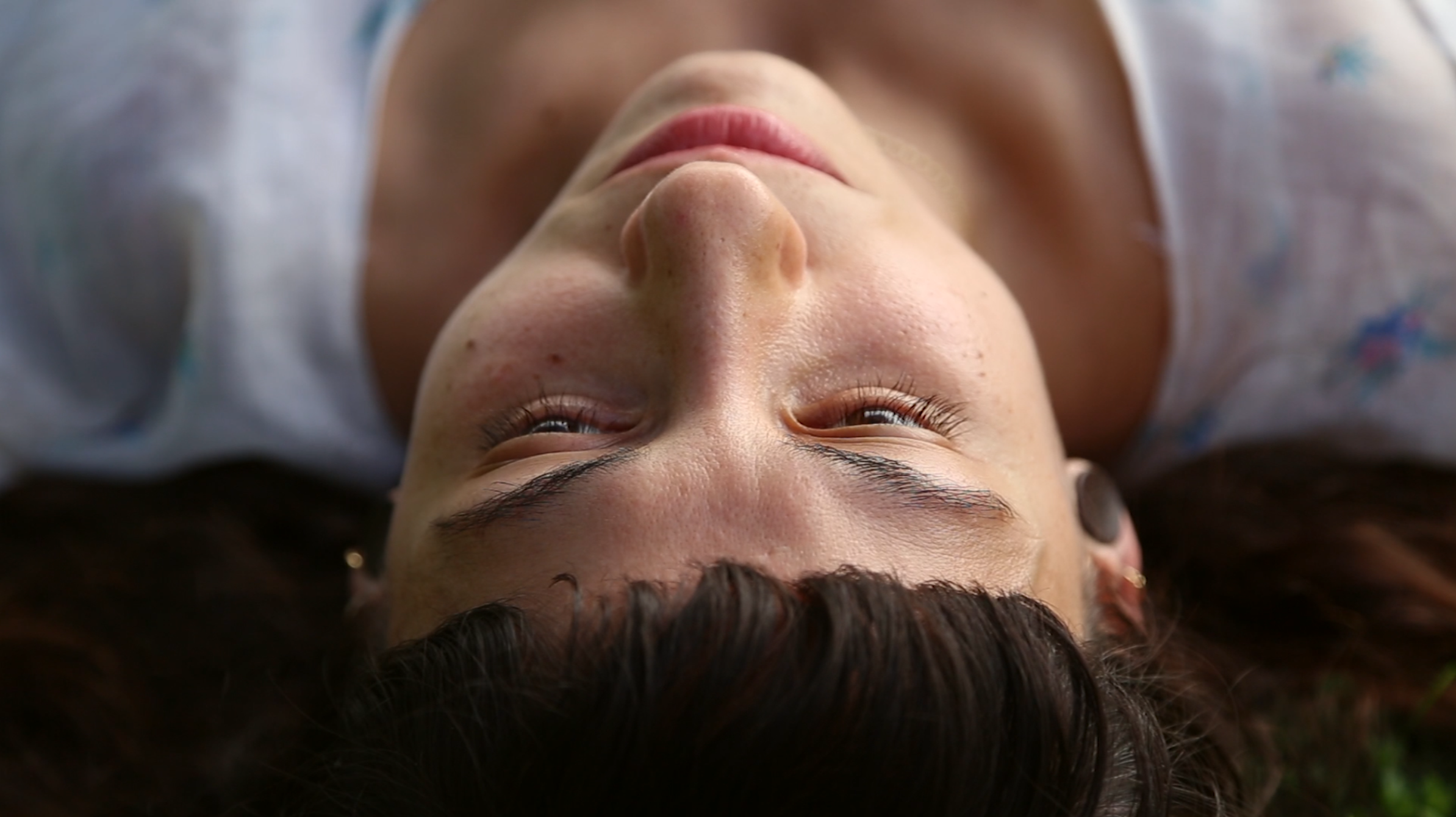 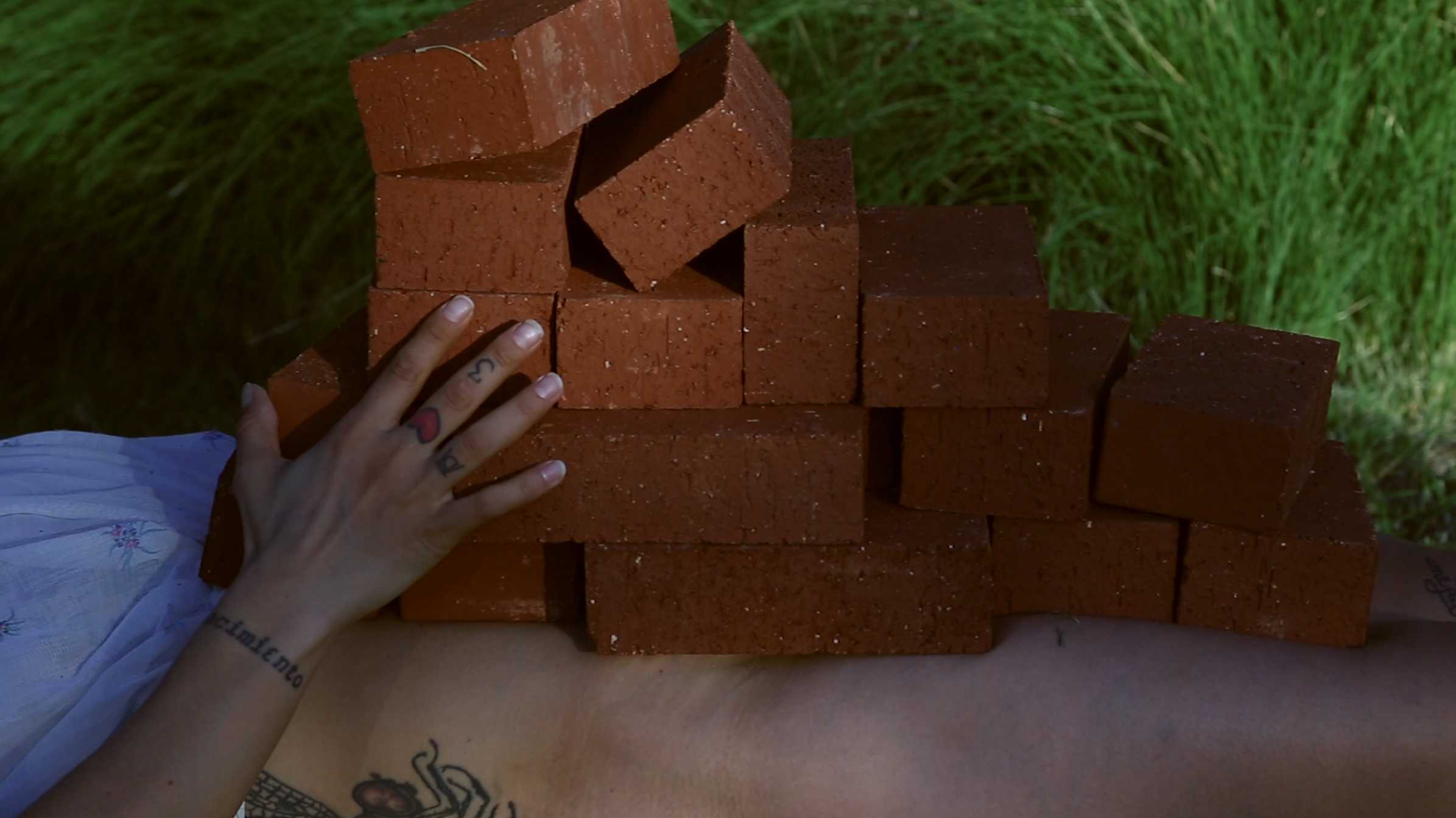 The next piece, 175 lbs by Silvi Naçi, invited me to put on a set of headphones, the soundtrack immersing me in an idyllic meadow chirping with birds. This film took place hidden in the bush around the corner. It was the most powerful piece in the gallery, depicting the artist stacking bricks on her pelvis to represent her rape. The raw, haunting imagery gave a visceral experience of the artist’s trauma. Through this performance, Naçi explored the way the memory was written in her mind, and how she carries the weight in her body, feeling immobilized and powerless. She cannot bear the full 175 pounds, and begins to free herself of the weight of her trauma. I, too, could feel the weight while watching this film, and I shared in her sense of triumph when Naçi freed herself. I believe that empathetic, engaging experiences with art such as this have the ability to heal the viewer as much as the artist. 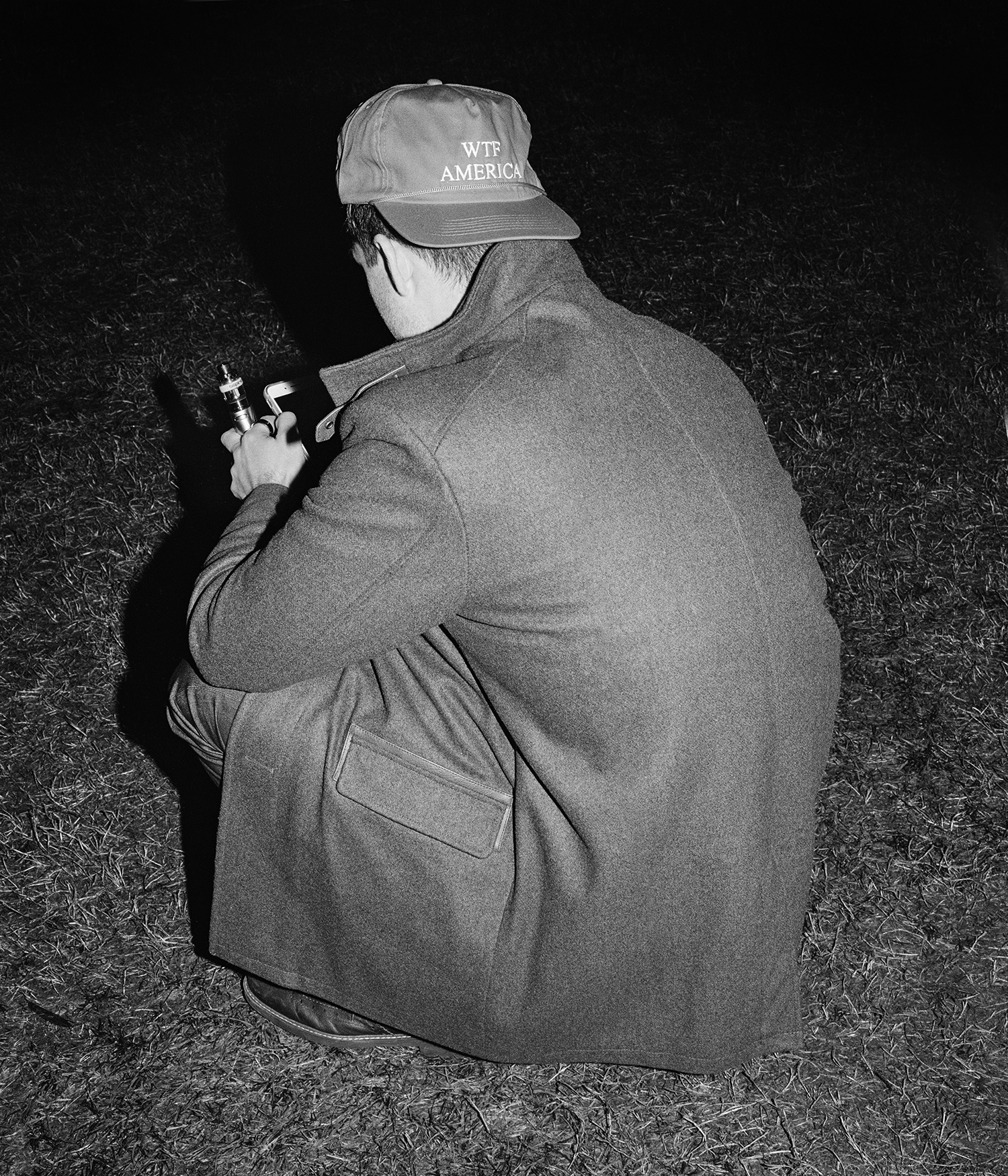 On the opposing wall was a glossy photographic installation, Wilderness of Mirrors by Chase Barnes, consisting of images of white men and boys in camouflage gazing at their phones as they stand before a background of foliage. Wilderness of Mirrors prompts consideration of the insulated world of the privileged elite, and the ways social media acts as an echo chamber which only reflects people’s own image back to them. It was evocative that every figure in this piece had their back turned from the viewer, and also from the film taking place in the grass behind me in the gallery. This curatorial juxtaposition illustrated the relationship that these two groups have to each other. The dominant voice is comfortably insulated within a hall of mirrors – we turn our backs to the uncomfortable truths happening right under our noses. 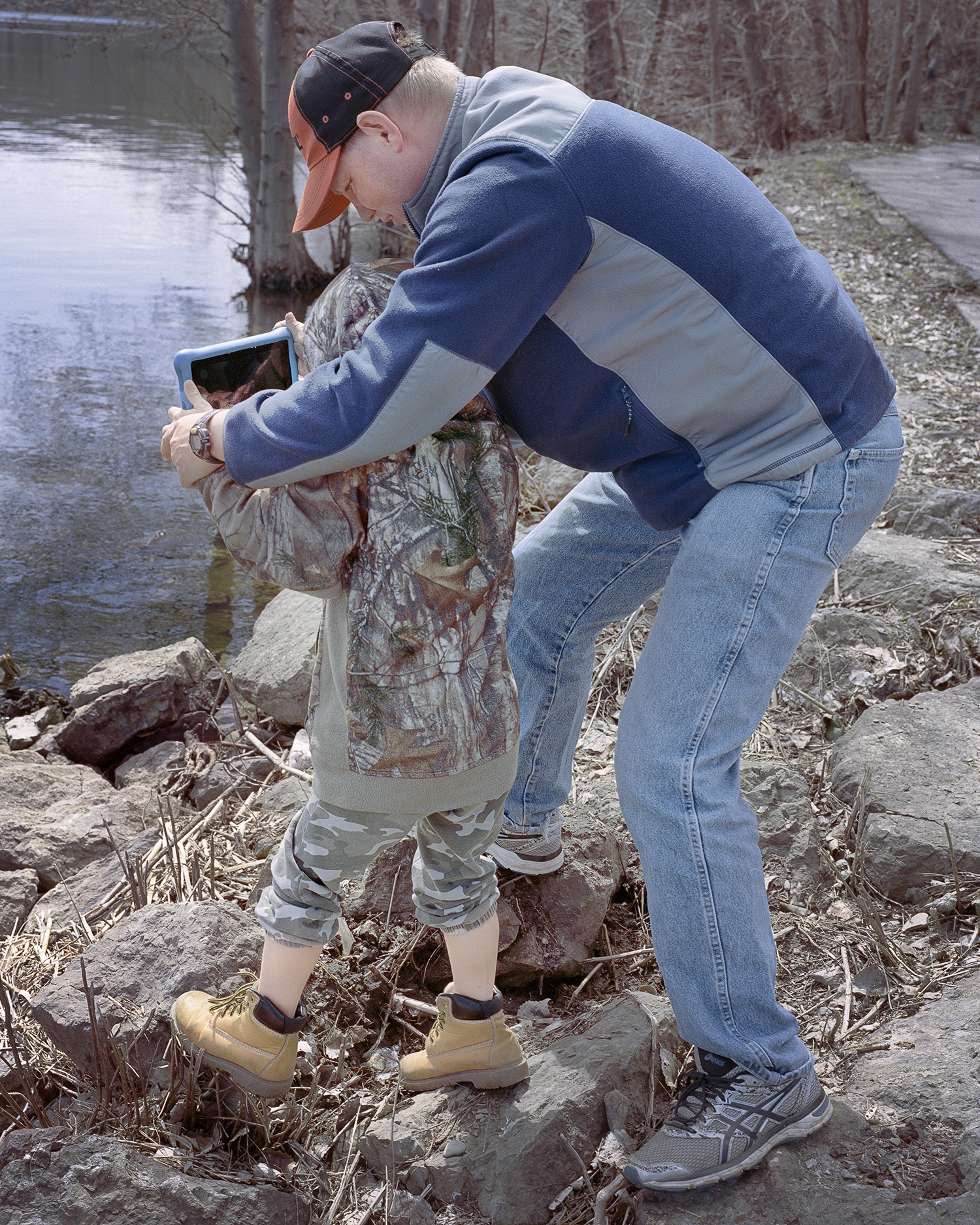 Ultimately, I walked away troubled by the same questions I entered with. I cannot make any conclusive response; the exhibition provided no remedies to society’s flaws. It merely illustrated the structures people in power have installed to keep others silent and powerless. Exhibitions like these give voice to the multiplicity of the American body politic and interactions between different power structures in our society. They can also work to begin the kind of conversations we need to be having in our current political climate. As I walked away, I asked myself, “How can we foster a more supportive culture? What are some ways of bridging conversation between two dissonant groups?”

The Body Politic will be on view from November 1st through December 2nd at A R E A Gallery.

Hello, there! I’m Leilah (stripper name: Penelope). I’m a writer, creator, host of A Stripper’s Guide Podcast, and the founder of A…