Tense is the most recent show at the Fort Point Arts Community Gallery in the Seaport District of Boston, curated by Gina Mudge. Here, “tense” refers to tension stored in the body, as well as the orientation of a verb in past, future, and present. The exhibition focuses on the work of fiber artists who have a curiosity with pushing materials to the point just before breaking, and the tension and narrative illustrated thereof. This was an exhibition entirely comprised of female artists. Each piece in this exhibition expressed a sense of strength under pressure. 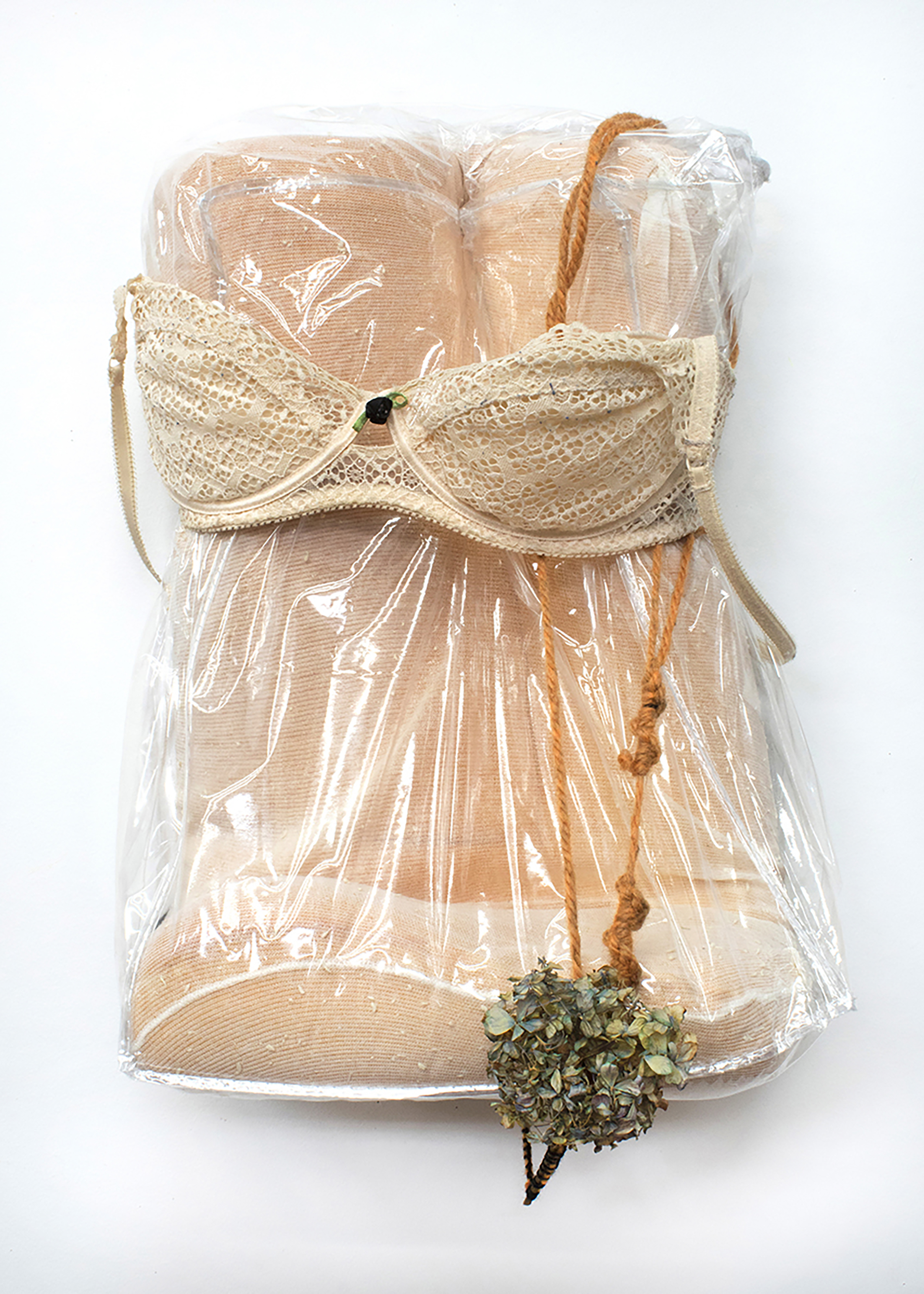 The first thing that struck me when I walked into the gallery was the center pillar, showcasing the sculptural work of Courtney Stock. Her pieces were comprised of organic and recycled materials. In her sculpture Baby (2018), she utilized intimate objects such as a pillow and a bra to create a figure of a pregnant torso with a dried hydrangea hung resting between the hips, representing the form of a mother’s body. 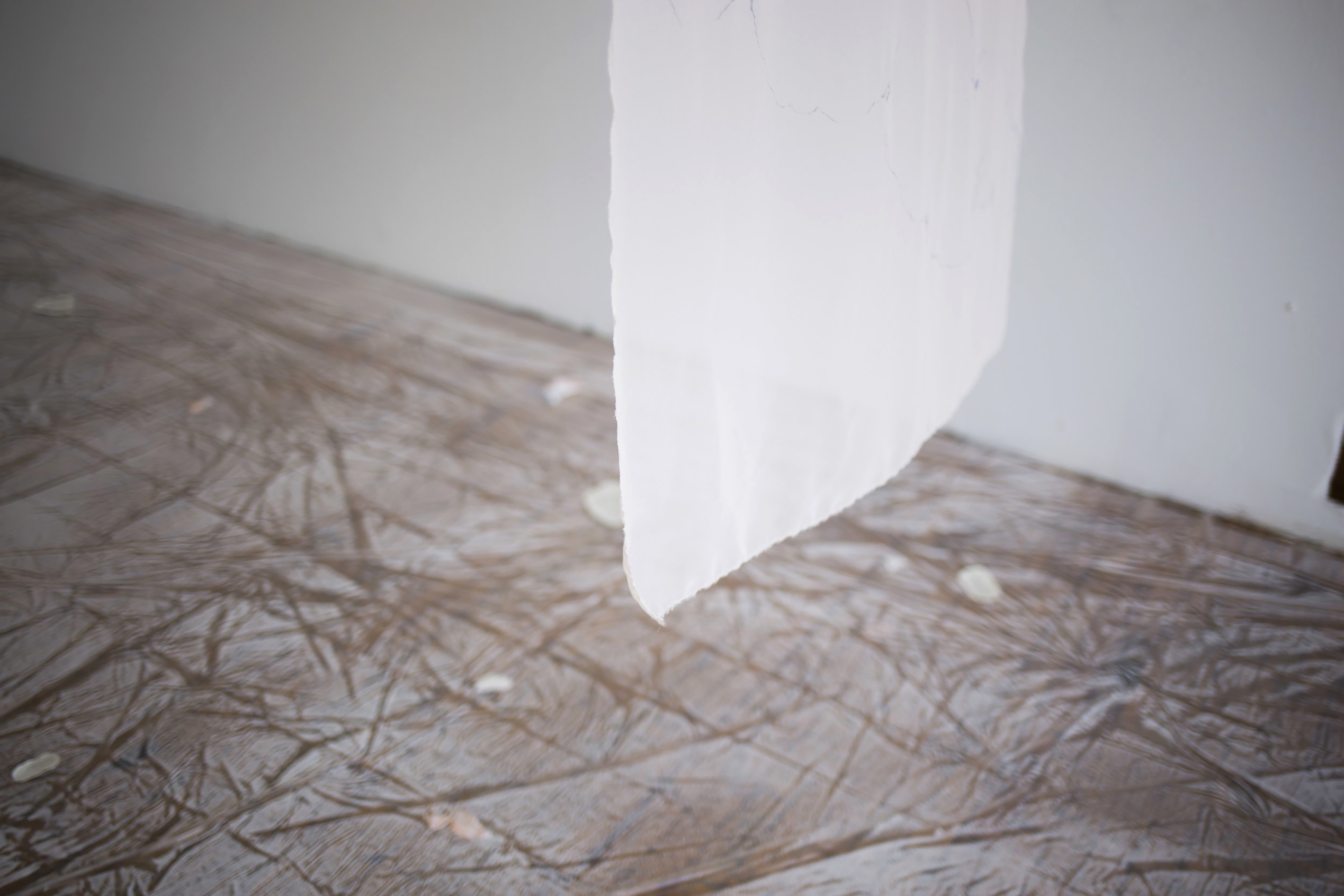 Next was the work of Sophie Pratt, which was comprised of a collection of figures made of dyed fabrics which represented the female form. These figures were interspersed with a set of photographs taken by Mel Taing of the performance space in which these sheets were first displayed. These figures showed tension in the body, making the fabric hang or stretch. The piece Infatuation (2017) was an articulate representation of a blushing silk dyed red with salt solution and stretched tightly over the wall. I felt it truly described the sensation of craving a new crush, and the mania of budding love. The performance referenced in the photographs was salt poured across the ground of the original gallery with the windows wide open. Silk sheets and objects were hanging from the ceiling and the ground was littered with fragments of poetry. The viewers of this performance and the wind displaced the salt and objects as they moved through the room. This was my favorite set of pieces in the gallery because it played with the materials used with natural curiosity. Pratt allowed for her inspiration to flourish, but invited the elements of chance and chaos into her process.

The photographs of Mel Taing have a quality of touch and intimacy to them, as they focused on the subject of hands. In the piece, The Night Before a Wrist Injury (2018), Taing illustrates someone flexing their wrists in close detail. This holds a sort of dramatic irony in her work, and illustrates a narrative within her photography. Another photograph in the set, Imperial Yellow (2018), includes a beautiful Asian subject with focus on her eye before a yellow background. This work illustrates a tension within the artist’s identity as a Cambodian-American. Taing says that navigating these two halves of her identity has been a process of learning and unlearning throughout her life. 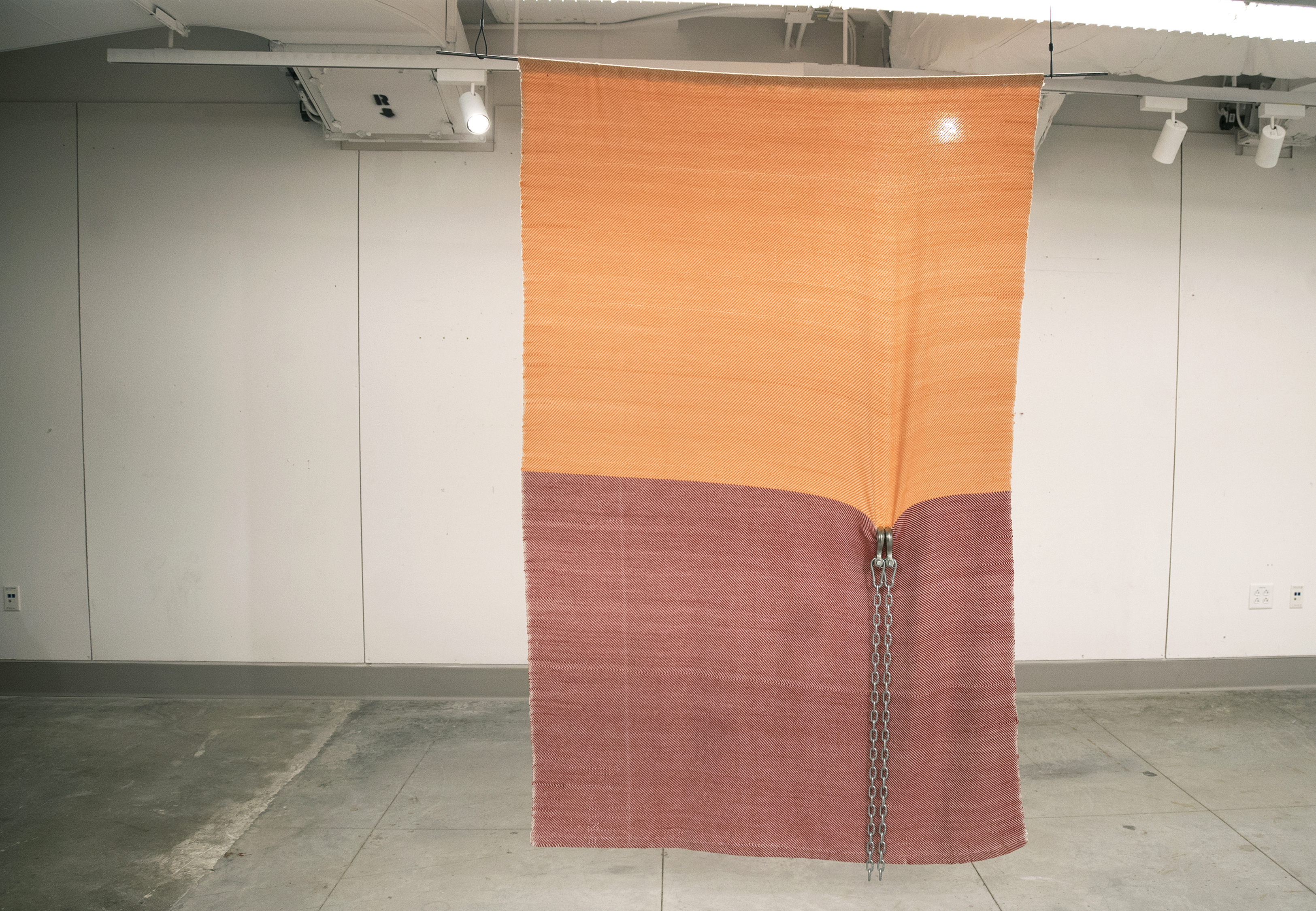 Another piece by Marissa Cote, Wait/weight visualized the tension in a relationship by hanging metal hooks from a hand woven fabric. The focal point was the effect of the weight of hooks on the orange and red weaving. She shows how the weight of something can warp a relationship. But the interesting thing about this piece was that she had expected the fabric to tear over time, but the strength of the weaving has remained intact after several years. This is an insightful metaphor. The weight can warp the material, but the strength of your character will not tear. 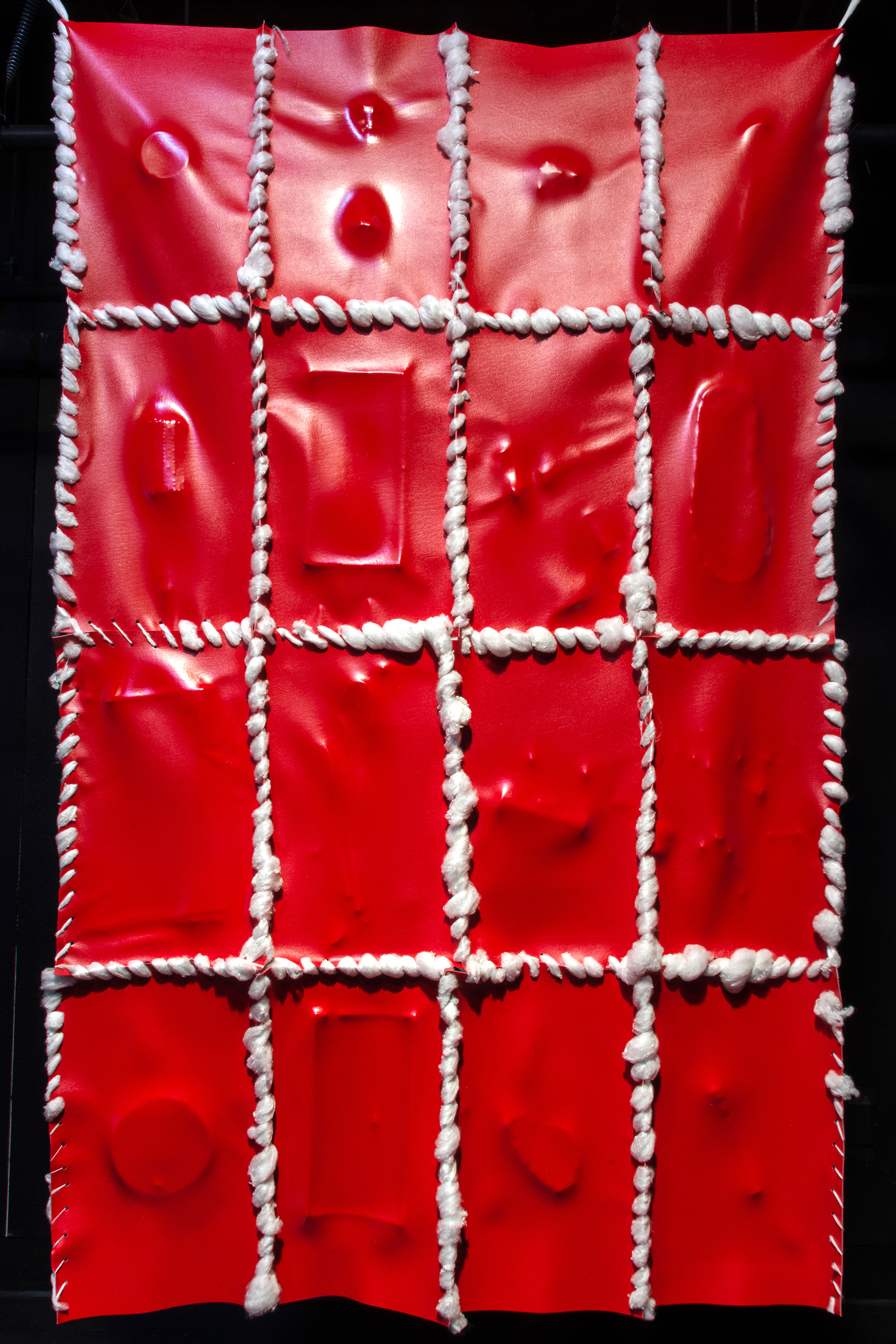 Finally, the works of Danielle Potwin were imprinted with the effects of her process. In the piece Ir/repressible (2017), Potwin pressed objects from her past into red vinyl until the material was just before the point of breaking. She then sewed the vinyl panels together using soft and fluffy silk, creating a quilt of forgotten impressions. For the viewer it is hard to decipher what these objects are, but it evokes an impression of a memory which shaped the life of the creator, much like an everlasting scar. It is impossible to know the nature of the objects stretched into the vinyl from the information provided, much like a traumatizing memory can be inaccessible to the conscious mind, ever present but hidden. This piece left me with a lingering impression.

On the night of December 6th, I attended Courtney Stock’s performance, I (2018) which left me with food for thought. She began by reading a litany of apologies on behalf of white people, and then cis people, beautiful people, and wealthy people for their privileges.  After reading her decrees, she crumpled the paper and submerged it in water, subsequently “washing her hands” of her guilt. This performance was interesting because it gave me perspective on the genuine lack of insight of the “white”, “cis”, “attractive” and “wealthy” communities that she claimed to speak for. I considered, what is the purpose of her apologizing for her privileges? Apologies are cheap unless you change your actions.

I also saw an artist’s talk with the curator Gina Mudge and artists Marissa Cote and Danielle Potwin. This provided insights on the process and intention of the pieces in the show, as well as the intention behind curation of the gallery itself. I learned about the experimental techniques of Potwin, and the meticulousness of Cote, which helped put their finished products into perspective.

Tense successfully illustrated the strength of women with all kinds of experiences, and how a piece might appear to be fragile or delicate, but maintains strength and integrity even under stress. This was an insightful experience and taught me a lot about the conversations going on today in the contemporary art world. I was pleased to see a space that was so intent on giving a platform to women and celebrating their accomplishments, as well as giving them a place to make their voices and experiences heard.

Tense is on view at the Fort Point Arts Community Gallery through January 10th. More information can be found on their website at https://www.fortpointarts.org/