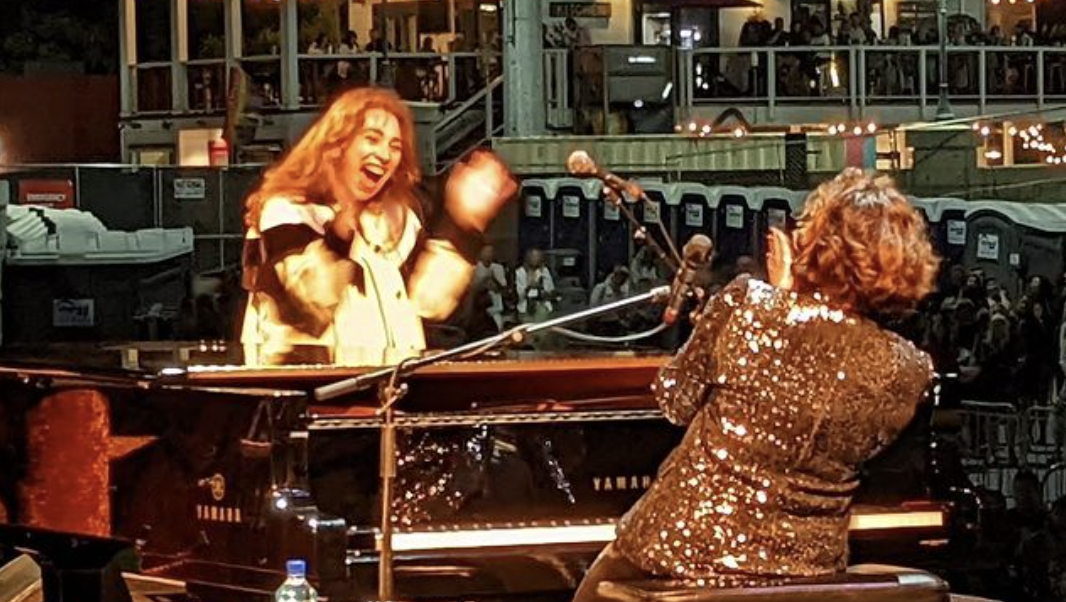 TUESDAY AUG. 2 WAS A SERENE EVENING; the sky slightly cloudy and tinged pink. At Leader Bank Pavilion, dozens of people congregated around the water, watching sailboats drift lazily across the harbor. This is where the ‘young’ crowd could be found, although there were far more older audience members that night. As we awaited the concert’s opening act, the dreamy anti-folk songstress Regina Spektor, oldies played over the loudspeakers.

Spektor’s biggest years were the early 2000s, her career during that era coming to a head with her 2006 album Begin to Hope. Tonight, Spektor would share the stage with fellow aughts rising star Norah Jones, who mentioned in a 2019 Armchair Expert interview that her debut album being released around 9/11 likely contributed to its success: people needed music that brought down the tempo. The clouds shifted from pink to a vibrant, brassy purple, and then the music began.

Spektor’s voice is unchanging. She wore a bright red gown with puffy sleeves—a reminder that had Spector come of age in the 2020s, she’d be a cottagecore girlie. As she ran through hits like “Folding Chair” and “Eet” (both from her 2009 album Far), Spektor often closed her eyes while performing, a quality hard not to find endearing. Between songs, she sipped from a black canteen and smiled demurely at the audience, thanking us for our applause. Spektor is a uniquely emotive singer—her songs, containing narratives she’s admitted to mostly making up, feel as though they’re happening in real time. Her face scrunched up in pain, in joy, in meditation against the piano keys.

In possession of an unflinching sense of rhythm, she had an almost Michael Jacksonian quality to her, flourishing every song with glottal stops and ornamentations.

The night cooled off considerably during Spektor’s set, turning the air crisp and buoyant. As the temperatures dropped, the stadium filled. By the time Norah Jones’s set began, nearly every seat in Leader Bank Pavilion was full.

Offering up her trademark blend of genres, Jones sounded husky and rich when she entered the stage, just as she does in her records. Behind her, the band was crisp, layering jazz with a tinge of funk. Jones’ fingers trickled across the keyboard like stones skipping over water.

Where Spektor’s lighting was simple and bright, Jones’ was smoky and mystical, shimmering onto the stage. Midway through her set, Jones invited Spektor on stage to duet “Angel Dream” by Tom Petty and the Heartbreakers. Their voices melted together, bringing a fiery flavor to the song’s country sound. Jones is clearly a seasoned musician, easily commanding the stage song after song. Her Texas twang came out in bursts, layered on thick for some songs (particularly those where she handled the guitar) and more subdued during others.

As the sky lost its color and the night grew colder, Jones’ voice provided enough warmth to keep us stuck in summertime. While people shifted in their seats around me, swaying to the music or chatting with loved ones, I felt that Jones and Spektor made a masterful pair.