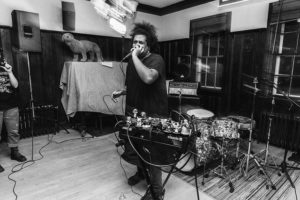 The night started off with a performance from Dump Him. There’s a good chance that anyone who frequents The Democracy Center has seen Dump Him before. The group puts always puts on a great live show, entertaining for long time listeners and new fans alike. The band’s roster for the night included Ellen Kempner of Palehound filling in on bass.

Next up was Loone, fronted by Noel’le Longhaul with Alyssa Kai accompanying her. Fans of Loone would be happy to hear some songs from their upcoming album in the night’s stripped down set, as well as an unreleased track that’s not even on the upcoming project. Kai’s role on piano was a large one, filling in for the all of the various instruments that appear on Loone songs. The intimate set was emotionally moving and one that I’m sure everyone in the room was glad to have experienced, and one that definitely left me even more excited for the upcoming Loone release.

The Democracy Center is a fairly modest space, definitely not known for elaborate lighting changes and dramatic shits in staging; but transitioning into Space Camp’s set one hanging bulb was left on to illuminate the group and they set up in a triangle formation. The atmosphere of the room changed as the Connecticut band played an end to end high energy, high volume set. Without any tracks going for much longer than two minutes, Space Camp’s set leaves audience members excitedly anticipating the next track. This feeling definitely helped to leave the room hyped for Pink Navel’s set which closed out the night.

I’ve seen lots of Pink Navel sets and I never get tired of seeing them live. The local rapper brings something fresh to each performance, working in perfect tandem on stage with the SP-404 as if it’s an extension of their body. For anyone who’s never seen Pink Navel perform their sets include a songs from dope raps, refreshingly creative beats, samples from Steven Universe, and more recently, beats made entirely from Mario Odyssey samples. They always wear their bubbly personality on their sleeve and continue to be one of my favorite artists from Boston to go out to see.

Check out the photos from the show below: 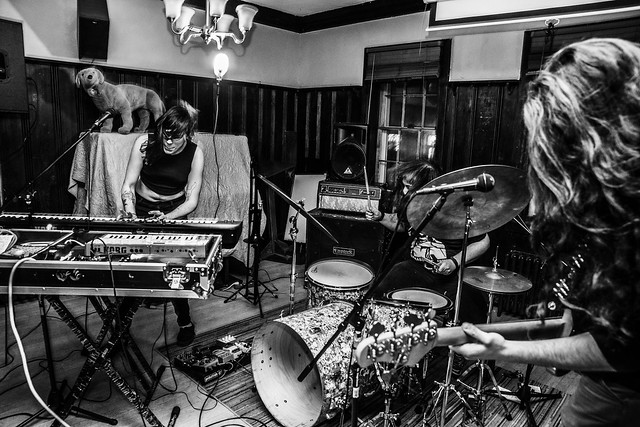 Liked it? Take a second to support Omari Spears on Patreon!