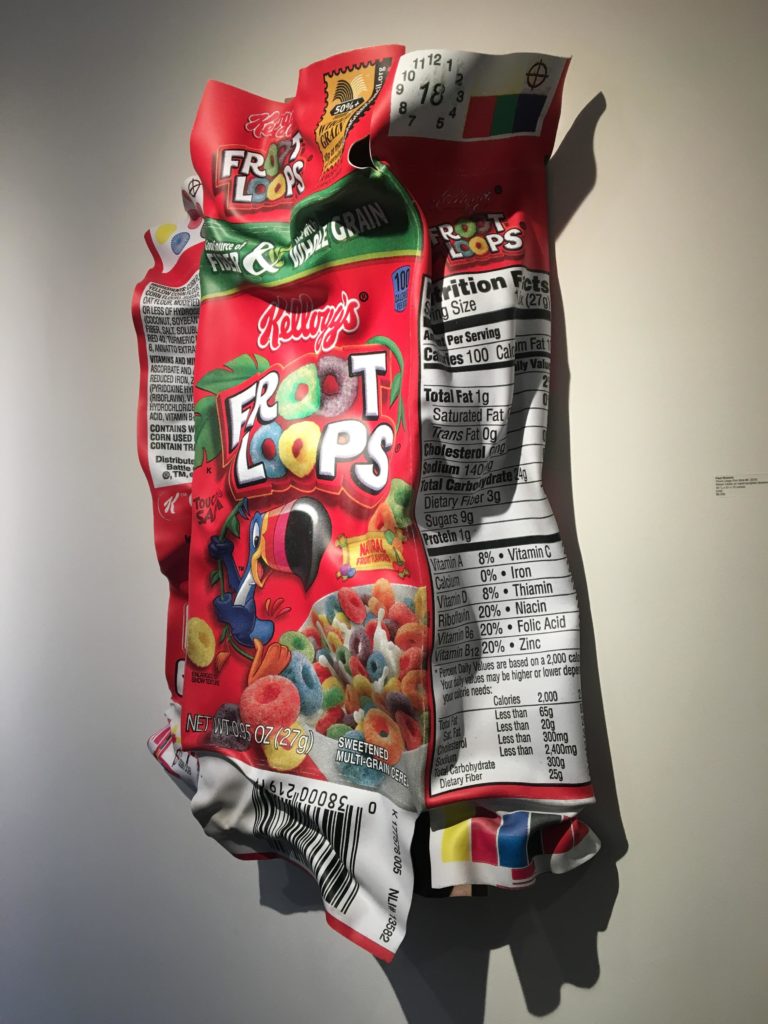 Paul Rousso takes everyday printed imagery, changes the scale, and then creates warped versions of the objects. The warping makes them feel used while the change in scale alters how the viewer is used to seeing them – both of these modifications together prompt reexamination of everything you know about these objects. The element of being ‘used’ is especially interesting, since the designs are all so pristine that it doesn’t feel as if they’ve been touched by human hands, rather as if the world itself has distorted them over time. All of the objects taken for inspiration are typically made from paper. By molding these plastic images as if they were balled-up paper, Rousso gives his works a physicality that keeps the objects grounded in reality. 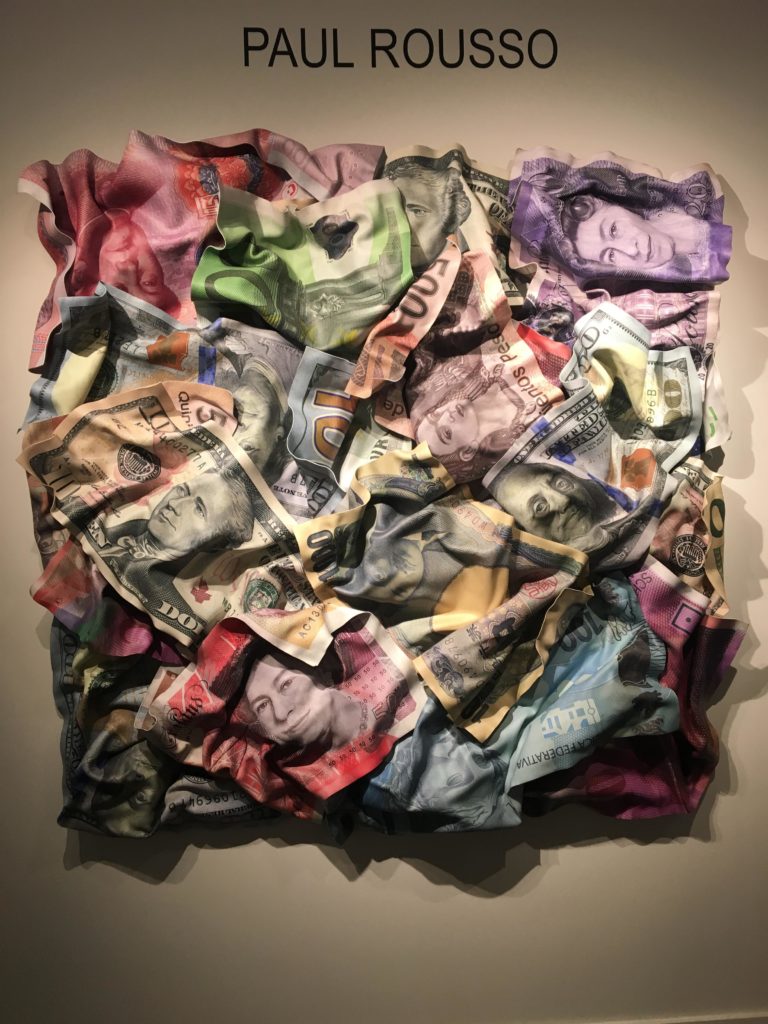 I will admit that most of my focus when looking at Rousso’s work was a “How did he do that?” sort of reaction. He seems to be using a newer technology, printing on large sheets made of some sort of plastic or polymer and then heating them so that he can manipulate wrinkles and folds into them. Fruit Loops Fun Size #5 (2018) and Internationally Renowned (2018) are both around 6-10 feet tall. Anytime you are faced with everyday objects of that scale, it forces you to re-evaluate your relationship to them. On a purely visual level, it is immersive and enjoyable to look at the design on a Fruit Loops box with fresh eyes, noticing for the first time how bright the colors are and how much information is actually contained on the side of the box. 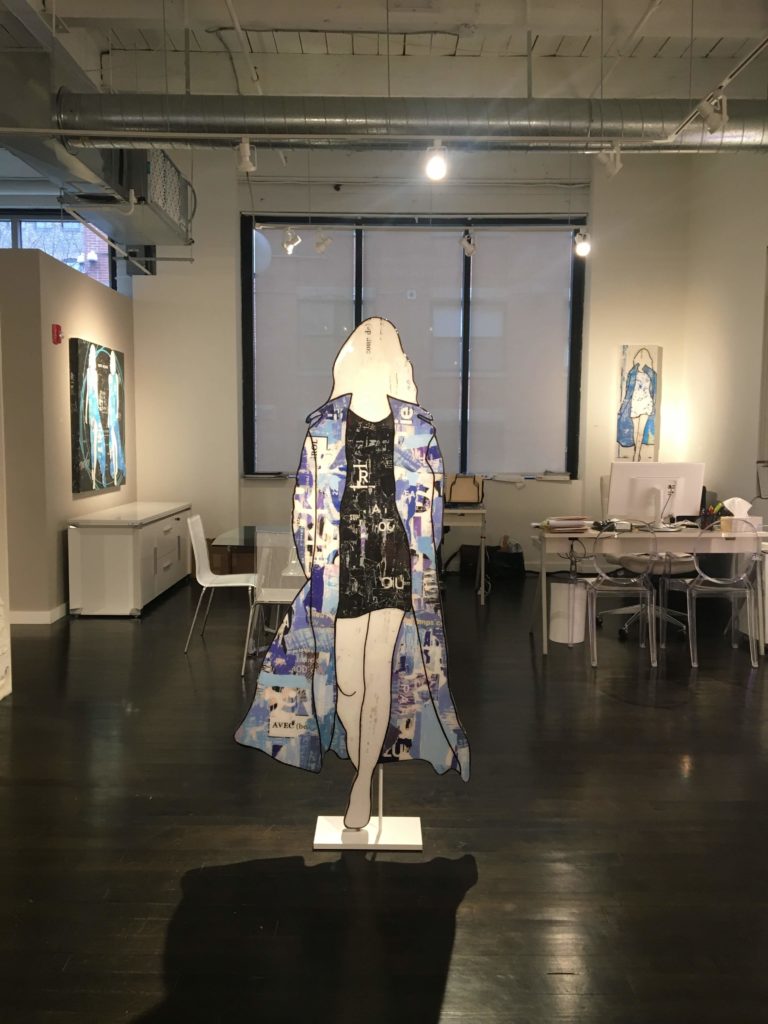 Jane Maxwell, whose work is on display on the other side of the gallery, makes fascinating sculptures based on her experience in the fashion industry. She repeats the form of a runway model simplified into a faceless paper cut-out-doll and fills the interior with print from advertisements re-purposed from old billboards. As an insider, Maxwell has the perfect vantage point to critique how the fashion industry dehumanizes the female form. At the same time, there’s an elegance to what she’s making, even in a mass produced and simplified form. If there were a phrase to counterbalance “rotten to its core”, this might be it. Maxwell strips away the rotten layers that are covering the essence of something beautiful. She’s focused on the empowerment of a female form striding with confidence and is reclaiming it as her own. 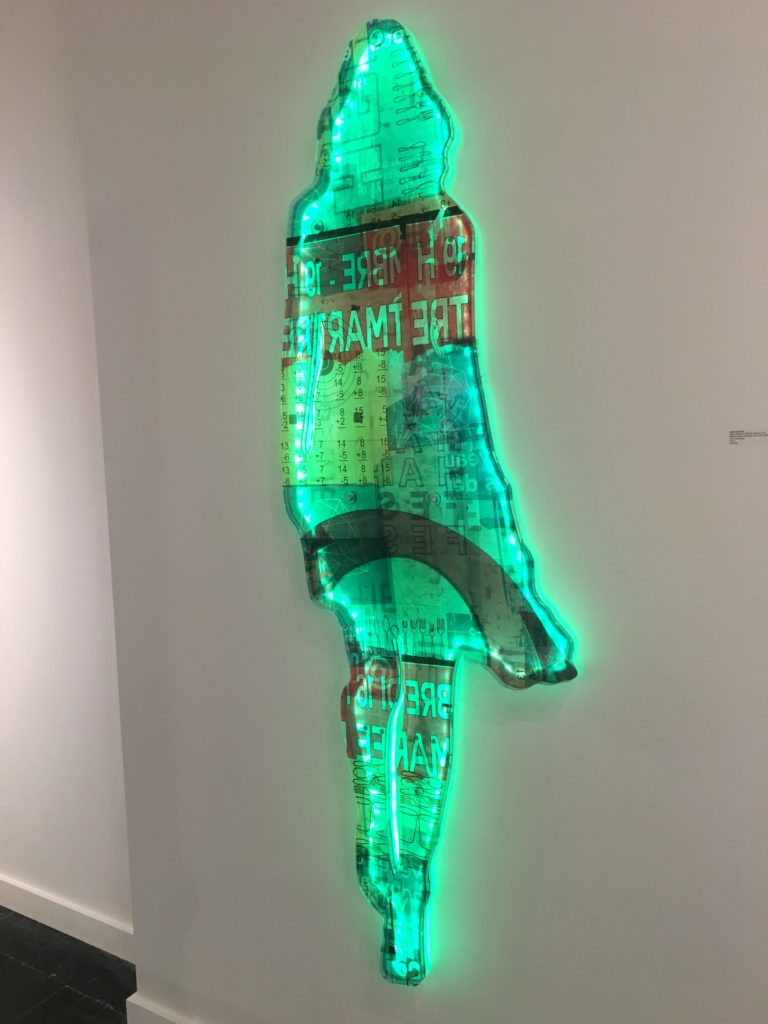 Reimagining the runway model both as a faceless figure who has been dehumanized but also as an icon of female confidence is an interesting duality. The contrast is both critique and celebration. Like any good conversation, it has two sides to it. Maxwell plumbs the depths of a flawed industry to find the parts that are worth saving.

I asked the guy manning the gallery how these two artists came to be paired up with each other, but he said he was just a money man and had no idea. I wonder if their art was paired together because they both pull from advertising and printed imagery for their source material, or if there was another connection. Either way, I enjoyed both artists’ work even if I didn’t necessarily see a clear message conveying what they curators were trying to say. Check it out before they pull it!

Works by Maxwell and Rousso are currently on display at the Lanoue Gallery in SoWa. More information can be found at https://www.lanouegallery.com/