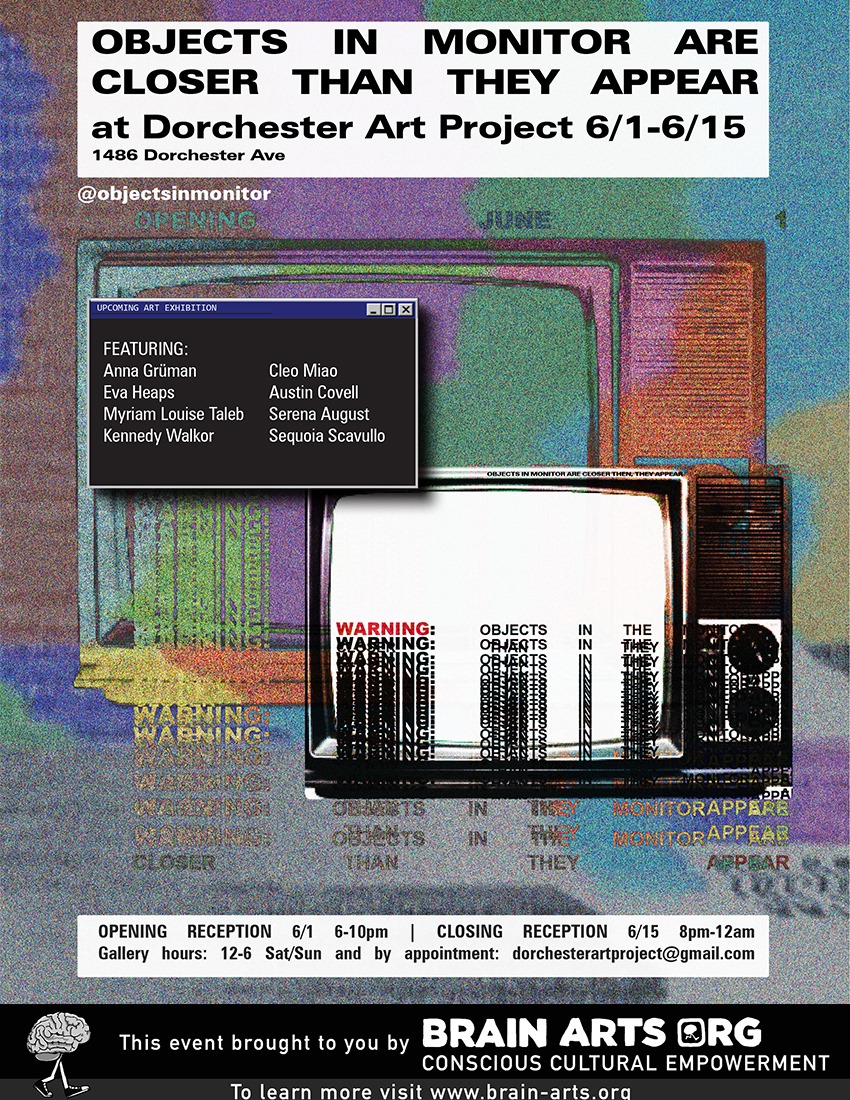 SMFA’s BFA (School of the Museum of Fine Art’s Bachelor of Fine Art) program put together quite a show at the Dorchester Art Project in celebration of their graduation. Exploring new media, these former students assemble a varied collection of works exploring the art not tethered to vast tradition and find some gold along the way. The idea of “new media” can be a trap. It can be a new toy and the basic experiences we gain from art can fall to the wayside as an artist feels their way around technology. Basically, it can feel a little gimmicky. This show doesn’t have any of that, as the pieces feel fully formed and the technology feels more like a vehicle for the execution of the idea than the focus of the pieces. 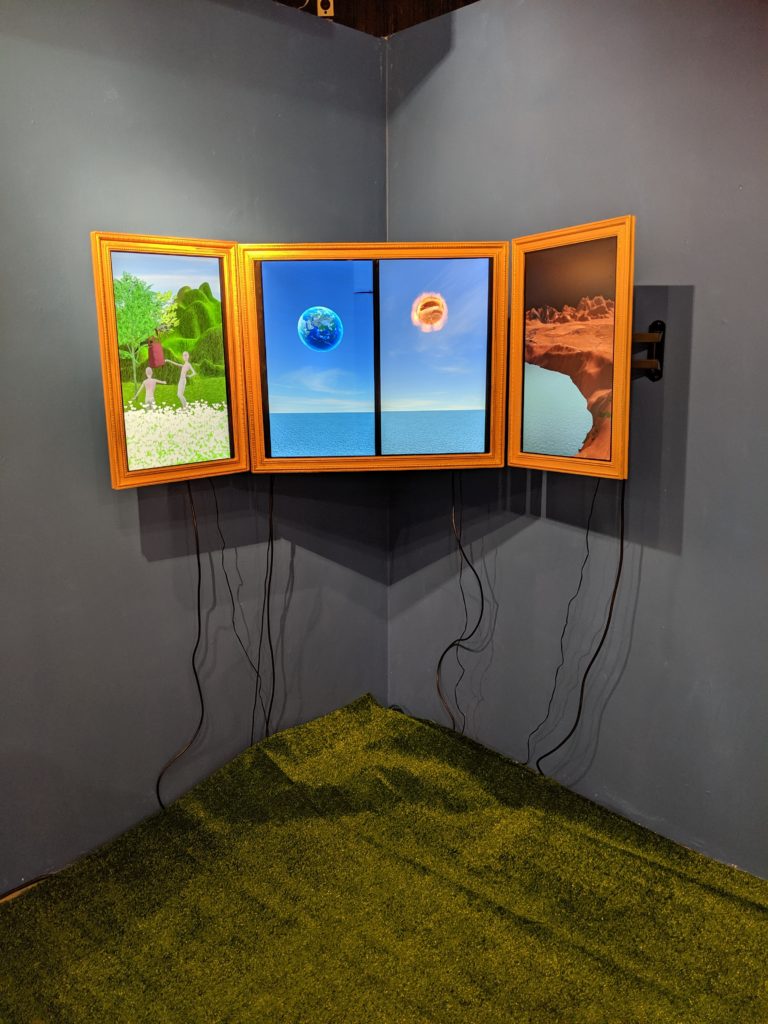 Eva Heaps’s piece is a good place to start.  Turf underlying a triptych of flat-screens, each with an ornamental gold frame wrapped around them. The center screens showed an alternating sun / earth hovering above a sea, the left side had a scene with two CGI figures beneath a tree in a countryside, and the right a rock landscape. All connect this new form of representation through digital media with the larger history of fine art. These scenes with a stationary viewpoint (along with the frames) made the videos evoke feelings of paintings but with moving subjects. The subject matters  of landscapes, religious imagery and flat shapes all help this idea along. “Painting is Dead” has been a popular phrase since probably six months after the first pigment was applied to a cave wall, but ideas like this may be the final straw that turns it into Betamax. Digitally created imagery from stationary viewpoints really does cover a lot of the ground that painting has been clinging to since photography came along. 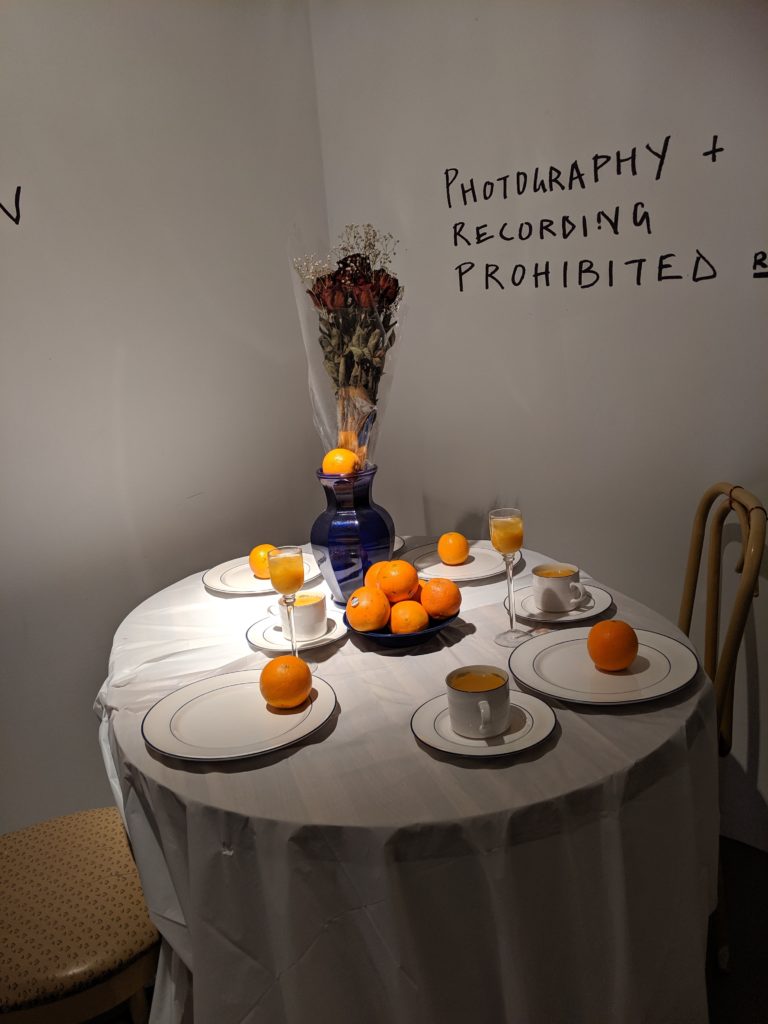 Dead flowers and oranges of all shapes litter the scene in this installation created by Kennedy Walker. As you walk upon this dinner scene, you’re confronted by decay, or at least the possibility of it: wine glasses filled with OJ, oranges on plates, and a dead bouquet as the centerpiece. The scene is set for your fancy dinner for 4, but the contrast is in the details. This is a still-life of perishable intent as indicated by the bouquet, so even if the OJ isn’t real (didn’t sip it, although I was tempted) it sits in a hot room for a month and the thought is intrinsic that it’s rotting. We’ll see where the funk levels are all at when the exhibition has its closing but either way, the reality of the objects feels perishable unlike the feeling you’d get from a painting of it. The absence of timelessness is as much of an advantage as it is a hindrance.

Also, there’s not a wall in this world that can tell me what to do! I run my OWN life, thank you very much. 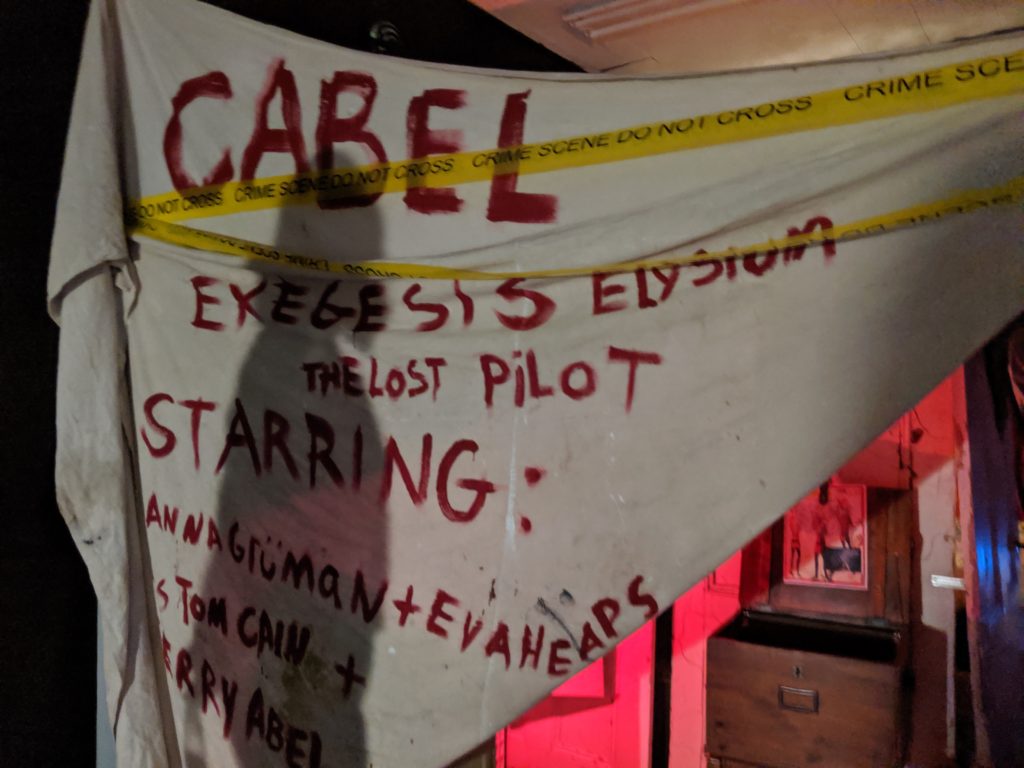 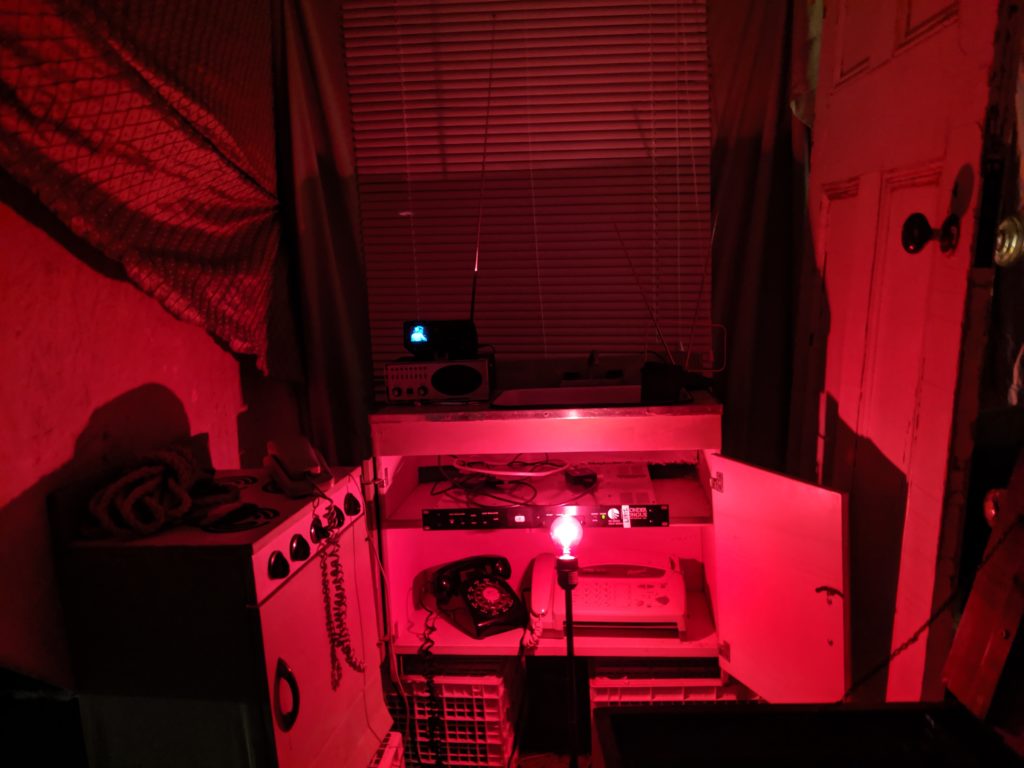 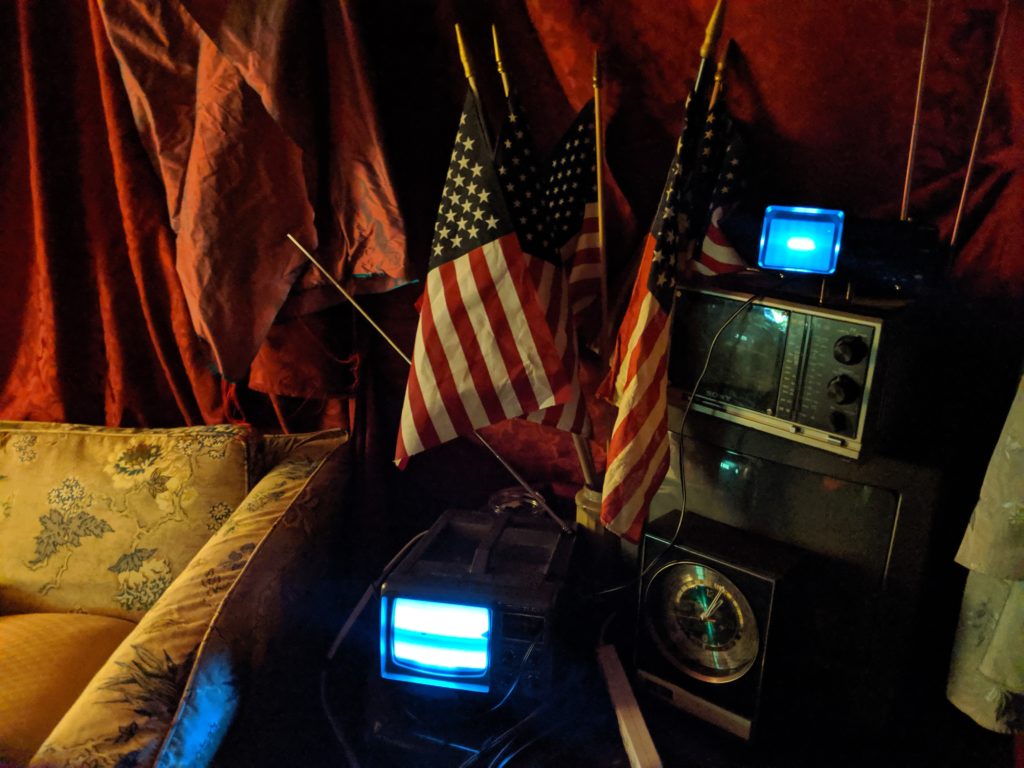 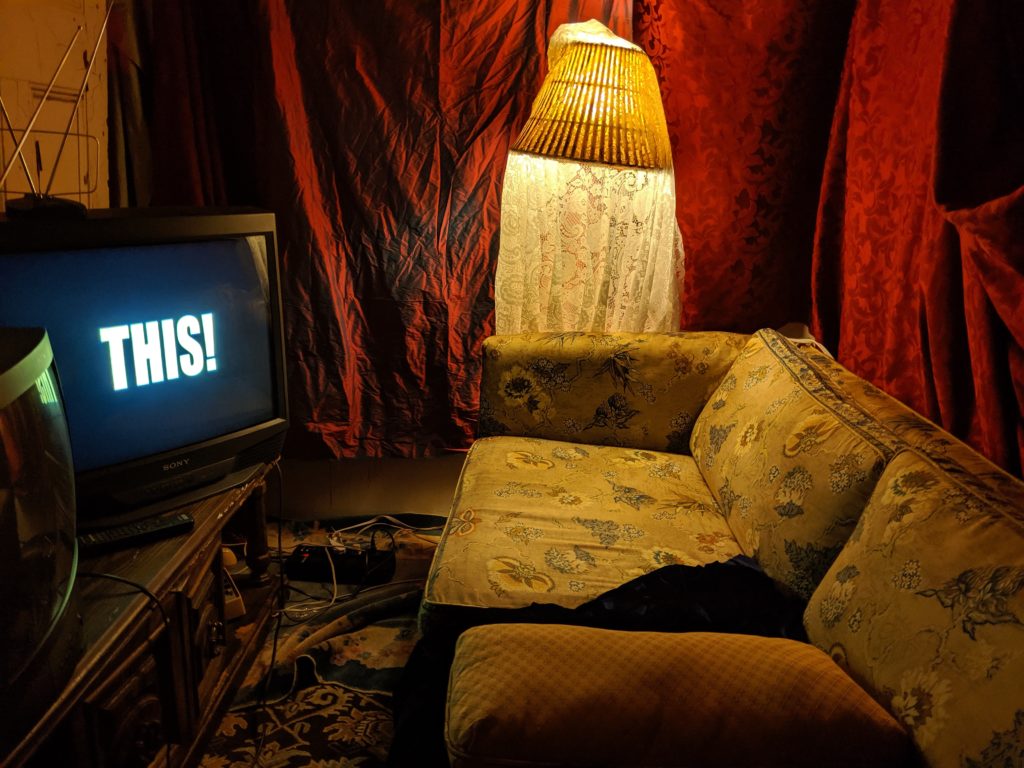 Further immersion comes from this piece the Lost Pilot. You enter in a shack and curve through the first room into an enclosure with a sofa. In front of you is a TV with edited evangelical videos playing through static. Behind you on a table are more small TVs playing the same image and you had to pass by them to get to your seat. It feels cramped, yet lived in. The piece does a great job of transporting you to another space and experience, and I think that’s the point. If this is an exhibition where pieces are trying to explore what art was before and distill it into new pieces using non-traditional materials, this piece seems to be the essence of the postcard. Transmitting experience of a place for someone who’s not there. I mean, who needs to go to Ruby Ridge when Ruby Ridge can come to you? It uses installation art as a vehicle for experience transference, and they even found a way for the multiple outlets and cords to really work with the piece and add to the chaotic yet calm atmosphere. 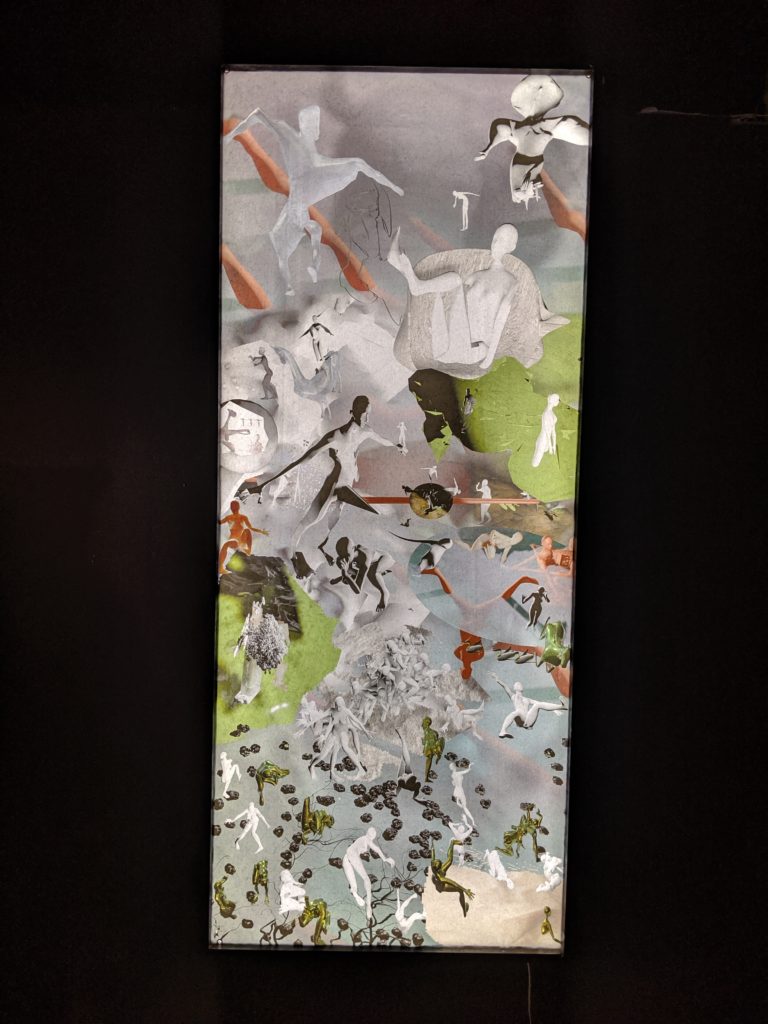 Immediately next to that is the more low-key light-box by Cleo Miao and Austin Covell. Computer generated figures dance around a larger composition in different states of transparency. Much like a Hieronymus Bosch, you’re presented a larger composition that then invites you to delve into the details of the piece. Each figure is up to something different, and the use of the light box with different digital transparencies gives it a depth unavailable to traditional techniques. This piece seems to be less about capturing the essence of older art, but more taking the older art and showing that new techniques can build upon what once was. It’s a strong piece, and you can stare at it for a while making up your own story as to what all of these figures are up to. It’s specific enough that you can read into their poses, and yet there doesn’t seem to be a clear narrative, so you fill in the gaps with your imagination.

Youth is a double edged sword,  and that’s very apparent in this show. There’s a rawness that sometimes loses sight of details, but the work itself is fresh, energetic, and ambitious. That’s how it should be, too. These kids are not only ready to carry the torch, but to burn some shit down with it.

Objects in Monitor Closer Than They Appear was on view at Dorchester Art Project June 1st to 15th. More info about DAP and their upcoming projects can be found at @Dorchesterartproject