The curators of the seminal New Ecologies (3/21/19) stated their intentions behind the space as being “a grounded space… for new growth and to celebrate new life”. I arrived at the venue, an industrial building deep in Brighton, feeling a paralyzing ambiguity; as it turns out, the building is segmented into many different practice and recording spaces, and my intuition to “follow the music” turned out to just get me even more lost among the building’s unlabeled corridors. Eventually, I found where I was supposed to be: a door unmarked but for a geometric, wood-carved duck affixed to its outside. This was Ugly Duck Studios, a newly-renovated recording space that would play host to a modest group of queers and queer-adjacents this particular Thursday night.

The theme of the night was hospitality. Case in point: admission was free, with donations collected in support of a newborn child born just this month, the “new life” referenced above as it were. Further case in point: when the amulet on my necklace fell off within 5 minutes of my arrival, the studio staff immediately retrieved a toolbox and helped me find needle-nose pliers to fix the chain. A group of about 20 congregated in the recording studio, where mics, a keyboard, and laptops were set up to amplify the performers and also record their performance into high quality audio. 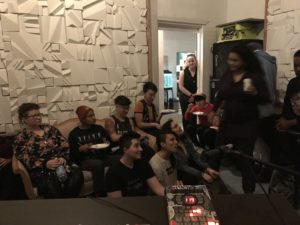 First up was Bindiram (Oakland), in the first performance of his first ever tour as well as his first ever time in Boston. Bindiram (he/him) lists his influences as rooted in West Coast hyphy alongside soul and R&B, and he also shouted out the Black progenitors of hip-hop, dancehall, and soca and the Indo-Caribbean genre of chutney soca during his set. (Bindiram himself is Guyanese, with roots in the East Indian community which makes up the majority of the nation’s population.) Bindiram’s five-song set reflected the multimodal nature of his identities and influences. The first, “Kelela Riddim”, interpreted an electronic instrumental by the aforementioned artist with lowkey raps in Guyanese creole. This vibe continued with his tracks “Gyal Yuh” and “Pon De Way”. At some point, Bindiram took the mic from the stand and began to bellow his rap; the crowd received it well, vibing and passing a small trove of blunts around the studio space.

Bindiram’s artistry speaks to a larger cultural shift toward extolling the virtues of diaspora. His fourth song, “How Yuh Doin’ Phuwa?”, is dedicated to his auntie, called phuwa in Guyanese creole. The song begins with a voicemail message by phuwa herself, flipping a musical motif associated with misogynistic male MCs and recentering it around family and kinship. Musical elements of the track also infuse diaspora aesthetics with contemporary stylings – in this case, the East Indian tabla sampled and distorted to festively complement trap kicks and hi-hats. Though the event was advertised as a “kickback”, we have a similar word in Trinidadian creole that encompasses the laid-back, vibe-driven state-of-mind of this particular event: a “lime”. The last track, an unreleased dance bop called “Oly Shuffle”, paid tribute to former place of residence Olympia (WA) with a closing message of mutual aid: “I’mma make sure my family eat! / Everybody eat!”

Second in the line-up was trip-hop duo Optic Bloom (Boston), made up of vocalist/producer Erin and multi-instrumentalist Daniel. (Daniel is also the co-owner of the venue, Ugly Duck Studios.) Their set was one of blunt and necessary statements; Erin (they/them) introduced their second song by saying, “This is a song about being trans.” They then introduced song #3, “Tropical Depression”, with the following disclaimer: “This song is about being depressed when it’s nice out.” Many in the small crowd knew the words and sang along to “Tropical Depression”, which received a music video last year. Erin’s vocal style pays ample homage to vocal heavyhitters like Amy Winehouse and darkwave denizens like Martina Topley-Bird and Beth Gibbons. The somewhat serious set also made room for surprise; during at least one song, Daniel (he/him) took a break from the keys in order to play a solo on trumpet.

Another exchange that highlighted the vibe of the night: upon announcing Optic Bloom’s last song of the set, Erin addressed the crowd to say: “We want to make room for Quisol.” Quisol replied from the crowd: “No – please take it!!”

Quisol (Oakland) played last, making use of the microphone, a guitar, and a loop pedal throughout their set. In keeping with the blunt and necessary statements, Quisol began their first track “Blue Curaçao” by stating: “This is a story about colonialism… This is a shout-out for colonized people.” Owing to their own doubly-colonized roots in the Philippines and Puerto Rico, Quisol (they/them) crafted a postcolonial take on the 2010s zeitgeist genre called “tropical house” with mellow instrumentation and Spanish-language lyrics. Their second track, “Hummingbird”, had a more impromptu acoustic feel, with Quisol channeling the energy of gender-nonconforming Filipino bakla in their lively rendition. These tracks and more come from Quisol’s brand new release REVELATIONS, available on Bandcamp. That said, the tone of this event was very much not a grab at album or ticket sales; Quisol ended their set by promoting Ecuadorian LGBTQ initiative GuayaQueerCity and encouraging the people of color in the audience to call out the name of an ancestor to close out the performance.

The event ended in a communal sharing of words and rhythms, with members of the crowd singing along to “Say My Name” by Destiny’s Child and “He Loves Me” by Jill Scott. There was more that took place before the event closed out for good, but I don’t feel compelled to report everything back in detail. Know that the feeling that circulated in that space was something shared and sacred — a manifestation of the cycles of rebirth that the event’s title of “New Ecologies” was evoking from the get-go.

True facts: on the last page of my journalings for this event in my notebook, I just wrote “CATHARSIS” in big letters. The  feature performers and the organizers at Ugly Duck aimed to create an event that was organically uplifting and celebrating of community, and they succeeded at that and more. 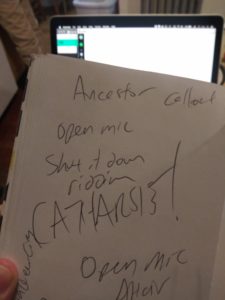 HASSAN GHANNY is a novelist and music journalist who resides in Boston, MA. He is the author of the essay collection SCORCHED RICE: Manifestos on Caribbean Diaspora Liberation. His music writing has been featured in Cuepoint. He can be found at @hassan_ghanny on Twitter and @diaspora.gothicon Instagram.