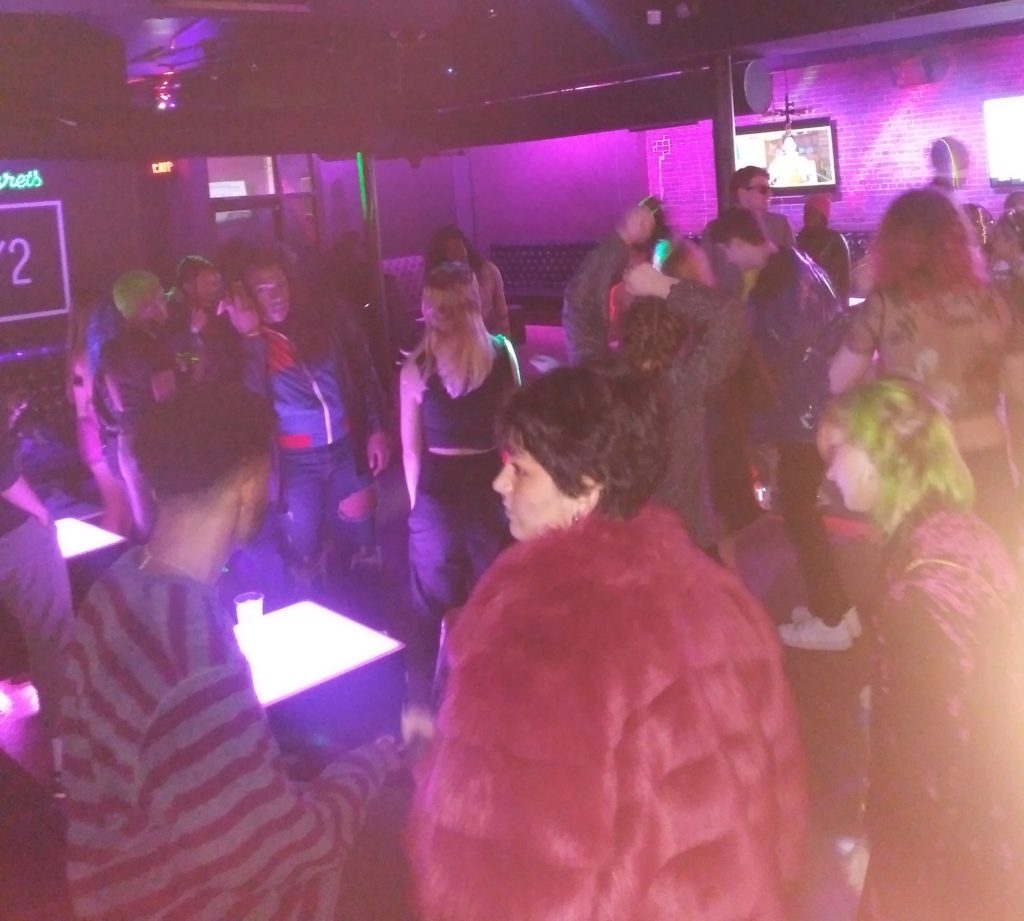 There are some rules of Boston nightlife that are unspoken but seem impermanent: only rock and funk bands play at West End bars, acts by artists of color that aren’t major label must operate on the periphery, and events wrap it up at 12:45 to get everyone home on the T. Last week’s MICK DEATH bucked all of these vociferously and defiantly. For this event, promoter and performer Mick Beth (@itsmickbeth) convened an all-black lineup of hip hop, R&B, and underground performers to play until 2AM at 2twenty2, not even a stone’s throw from TD Garden. (This venue, opened in 2017 in the former Rogue nightclub space on Friend St, has also been host to at least one other unorthodox event, drag revue Gay Bash’D.) At MICK DEATH’s third volume, the theme of which was “Villains”, the righteous forces of gender nonconformity and black power correctly antagonized the entrenched norms of Boston nightlife to produce a night of revelry.

When I arrived at 10PM, the typical character of the North End was alive in 2twenty2, with antsy male bouncers milling about and a hockey game blaring on the venue’s abundant flat-screens. It seemed as if Mick Beth’s entourage was gathered at one end of the bar, glitzed up and dragged out, while the other end of the bar where I sat was decidedly hetero. By 10:20PM, however, DJ AF1SHAWTY (@af1shawty) brought the right energy in quickly with some horrorcore rap and the banji girl dirty trap sounds of Megan The Stallion and City Girls. There is something to be said about safety in numbers; though your average attendee of MICK DEATH might feel apprehensive walking around the heteronormative nearby locus of Faneuil Hall, within the venue a vibe of energized, defiant acceptance pervaded.

Tonight’s MICK DEATH was the third volume of an event series which previously came to life in basements as underground shows. This show was both a coming-out and a coming-of-age for 21-year-old promoter and performer Mick Beth (they/them), who moved to Boston from Georgia in 2017. Mick Beth made their feature performance only a year ago at a house show in Jamaica Plain, and had their highest profile gig headlining the Middle East on January 30 of this year. Just a year into their performance career, Mick Beth has the pull to organize and curate a nightlife event and — most importantly — guarantee a turnout, a fact that should feel threatening to the entrenched underground and underground-adjacent event series from Harvard Ave to Harvard Square. (Full disclosure: Mick used to be one of my roommates, and the first edition of MICK DEATH happened in the basement of that house we shared back in 2018.)

The theme being “Villains”, the crowd and the hosts indulged in costumes and outfit concepts. Among them: multiple variations on Pennywise, Katana and Mileena from Mortal Kombat, and, quote: “me… cause I’m a bad girl”. 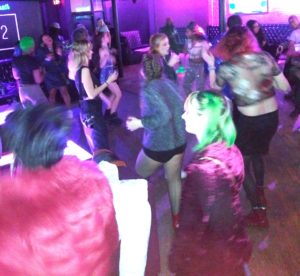 The dancefloor was already seeing action when Boston veteran performer Harocaz (@harocaz) took the mic at 11:15PM. Harocaz (she/her) performed a few freestyles, commenting the following in between tracks: “People just villainize you just for feeling a way… I owe it to you to be honest and true about how I feel.” Because 2twenty2 does not have a formal stage, Harocaz performed directly on the dancefloor within physical range of the loyal crowd, itself a queering of the performer/audience dynamic in most established venues. As Harocaz performed her set, more attendees entered and the crowd reached its first peak of the night, with those on the dancefloor bopping along and serving hand illusions to the upbeat track “Blamma”. Harocaz finished her set with the subtly impeccable statement: “We’re on Friend St, and we’re all friends here.”

Mick Beth took the stage next with a sneak peak of their set, performing crowd favorite “Ghost or Roast”. A line from the song encapsulates Mick Beth’s presence in a revitalizing Boston scene: “I’m a new bitch / I’m a nuisance”. Though the microphone was cutting in and out of the performance — 2twenty2’s audio setup leaves much to be desired — Mick kept it rolling through their teaser performance. Mick Beth echoed the sentiment of Harocaz before them, but with a slightly more political tone: “Black people seem to get villainized a whole lot… but guess what? I’m a real proud ******.”

Some highlights from various points of the night: the opening bars to “Act Up” by City Girls came on before cutting out, and host Julissa Emile (@motherjuniper) called out to the DJ, “Run that shit back!!”; in between sets, a moment of silence resulted in the whole crowd doing the “no music” clap; and a group of white twenty-somethings adorned in blazers and department store dresses popped their heads in before realizing, rather quickly, that this party was not for them.

Best dressed of the night went to second act V3S0L0 (@v3s0l0), who performed in six-inch wet look stiletto boots, a blazer and corset, a black jockstrap, and white fishnets worn as a face mask. V3S0L0’s set consisted of R&B-inspired witch house, perfectly capturing the cacophonous, gender-apathetic club kid scene formerly of Manhattan and today manifesting in Queens and Berlin. V3S0L0’s performance ranged from impassioned crooning to rapid-fire bars; third song “Parts” brought in a vogue-esque beat to create a queer bacchanal, while the last song, a cover of Roy Orbison’s “Crying”, demonstrated an unexpected versatility in technique and influence. MICK DEATH was a microcosm realization of V3S0L0’s artist statement: “Using Music And Technology As A Means of Decolonizing”. Though V3S0L0 is much more than your run-of-the-mill bar queen, the audience did tip by throwing a few dollars their way during the performance. 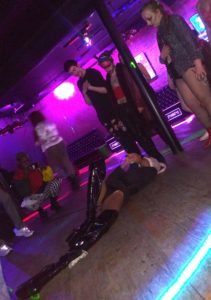 Third on the bill was local rapper Liu Krabbe (@liukrab617). Liu Krabbe’s set brought high-energy yet heavy trap, an aggressive femme swagger that could sink teeth into any given patriarchal interloper. Liu Krabbe (she/her) performed a set of mostly unreleased material, eight songs in total, the highlight of which being bass-heavy bops “Earwig” and “Awfulot”. The crowd was plenty bopping along, though the full measure of Liu Krabbe’s bars seemed to go slightly unappreciated — her performance style seems much more suited to a stage directly overlooking a mosh pit more than a swanky Asian fusion bar. Still, Liu Krabbe’s general vibe was unfuckwitable; to quote from her “No Sleep Freestyle”: “Diss me? / Honestly, I probably wasn’t listening”.

Mick Beth returned to the stage right as the last trains were leaving North Station to deliver their full set. Before performing first song “Virgo Vixen”, they beckoned the crowd: “Are there any Virgos in the crowd?” When they clapped in adulation, Mick jeered back: “Well, you suck!” (Full disclosure: Mick Beth is a Sagittarius.) Mick Beth’s high-energy, Instagram-friendly bops have captivated Boston’s young digital elite in the past year of their performance career. Tonight was a continuation of that success, with Mick effortlessly trading bars, vocal stylings, and twerking the house down boots over beats by local producer Babygoat (@babygoat617). Mick Beth too switched it up from contemporary rap to trip hop influences, performing a cover of “Glory Box” by Portishead (which they also performed at the first MICK DE▲TH house party). Last in their set were two trap-flavored bops, “Big Mick Energy 2.0” and the meme-inspired track “I’m Baby”.

You like weird bitches? I’m a fucking freak! Yeah, @boy.panties once said that to me! I took your lies, lined ‘em up real neat… then I snorted em a demon on the codeine scene these niggas think I’m scary! GOOD. I hope you’re afraid. I’m coming for your neck. I’m coming for your edges. I’m coming for every disrespectful becky, every pick me, every smelly cis man, every bum who tries me or my community. Let’s eat homies, but if ur coming to my table come correct. If you missed out last night, it was a moment. Swipe for two more chances to see me and some other DOPE artists pop out this month. MAY 9th & 20th. Be there. THANK YOU @motherjuniper FOR TAKING THIS VIDEO?

Last up was Hopeadope (@akahopeadope), a self-described “Detroit bitch from the 313” who has found her place among Boston’s femcee camaraderie. Hopeadope (she/her) performed nearly the whole set from their debut release CUTE AF, while also throwing in some unreleased hip-hop tracks and uptempo banger “Vibe”, previously released on a VFILES compilation. Hopeadope thanked the crowd for their streams, shouting out that “Vibe” “has over 16K streams on Apple Music” as of the event. Every Hopeadope performance is packed with studio-quality vocals, effortlessly-spat bars, and, yes, a whole lotta ass, to which the crowd responded by throwing dollars at Hopeadope’s derriere. As a performer, Hopeadope pulls her weight, even wins the tug-of-war; it’s only a matter of time before bigger stages and more exposure comes her way. 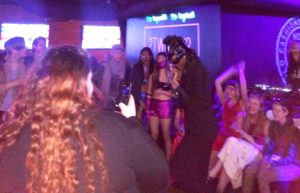 The event went on unfettered in both energy and spirit until past 2AM, a sign that the tide of Boston’s vanguard venues may be eroding for the better. Mick Beth promised a follow-up event to come, though they expressed apprehension at returning to 2twenty2. They wrote on IG:

“Last night was TIGHT but there were this SMELLY cis man at the door and honestly it was hard having this femme space w such an abrasive person giving ppl a hard time as soon as they arrived… so I’m throwing another Mick Death very soon. Same lineup. But probably in a basement.”

MICK DEATH’s runaway success proves something very tangible about nightlife in Boston in 2019: with a little elbow grease, those at the margins can claim their space and push their way back into center frame. In doing this event, promoter Mick Beth has demonstrated an incredible acumen in curating a lineup and bringing people together on a vibe of joyous transgression — on a Thursday night at that. What’s more, that transgression is seemingly effortless to the performers and partygoers at MICK DEATH; accustomed to life in an inequitable Greater Boston, this crowd absolutely shines when given the right conditions to unfurl. Despite the ever-present questions of securing a venue, guaranteeing safety, and turning a profit, MICK DEATH offers a vision of a Boston that is forthcoming, nascent, and greatly overdue. MICK DEATH is a prelude to a euphoric elsewhere where those at the margins don’t just throw a bash — they bash back.