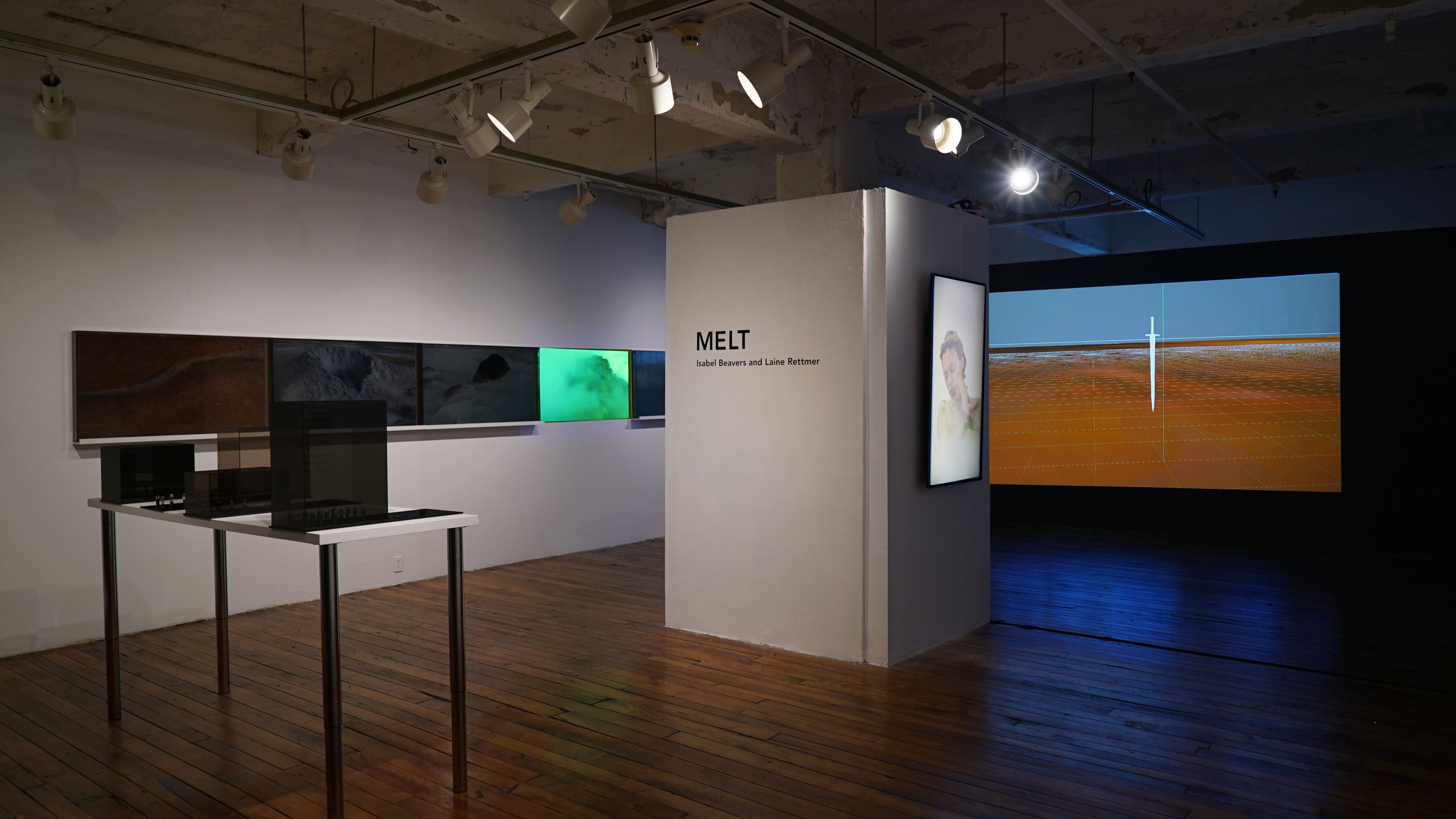 As long as we’ve been a species, we’ve told stories through art. From cave paintings, to Shakespeare, to billion dollar box office hits — storytelling is in our DNA. Sometimes it isn’t as obvious; garnering narrative from a sculpture or even a photograph can be more challenging than watching it play out on a television, but it can often be more rewarding, as the negative space allows more room for us to imbue our own emotions and relate in our own way.

Artists Isabel Beavers and Laine Rettmer address this head on in their latest exhibition, MELT, currently on display at the Fort Point Arts Community Gallery in the Fort Point neighborhood. Through video, sculpture, and photography, they reimagine mythology through a feminist lens, with a particular focus on Norse mythology and footage gathered during an artist’s residency in Iceland. As such, the landscape, climate, and native lore all factor largely into their work.

“Before going, we knew we wanted to investigate Norse mythology or the Icelandic sagas, how these stories are tied to landscape, and how we could explore them in relationship to Feminism,” says Beavers. The show came together over the course of a year, from the conception, to the actual time spent gathering footage in Iceland, to putting it all back together back in Boston. “The Icelandic landscape was a direct influence on the trajectory of the work as you cannot divorce the experience of shooting from the ruggedness of the terrain. We realized how small the human body looks in a vast landscape. We both work site-specifically, or site-responsively, which provides a rich context to respond directly to our experience in the field.”

Still from Melt (2019) by Isabel Beavers and Laine Rettmer. Click to Enlarge.

On my first pass through the space, I was struck by a video that displayed a woman clawing at her face. Steam rose up around her, as if being born out of some primordial soup. She was fair, and against the smoky white background there was a sense of innocence, but her teeth were sharpened — predatory. I couldn’t help but keep watching as she awakened in front of my eyes, born into this world, nor could I help but wonder whether she was good or evil.

One of the many things that made the show so impactful was the technical execution. Video can easily become a visual medium, but we experience it with more than just one sense. “Sound is used in the exhibit to hopefully create a hypnotic experience for the viewer as well as incite a phenomenological experience. The sound at times acts as ambient noise that is then ruptured intentionally by the use of an opposing sound,” says Rettmer. “We hope this creates an experience in which the viewer is entranced, yet also made sharply aware of their position as audience. Embedded within this methodology is our critique of the use and power of media.”

While the majority of the installation is comprised of video, there is some sculptural work as well. Seydisfjordur Slates (2019) is a work made up of four different boxes, each containing a number of USB drives that catalogue the footage gathered abroad. The boxes are set at a height relative to the approximate vertical elevation of the landscape, and on small plaques next to each are the very specific, very literal geographic coordinates, along with some candid notes relating to feelings around the site in question. There is a power in this juxtaposition, but equally interesting to me were the drives themselves. Even without opening the lid and viewing the footage for myself, the latent potential stirred a curiosity, once again leaving the narrative in my hands.

Still from Melt (2019) by Isabel Beavers and Laine Rettmer. Click to enlarge.

One cannot help but stand in awe of the majesty of the Icelandic wilderness, but at the same time it is hard to view the landscape without filtering it through the lens of climate change. While this was not the focus of the show, the idea was present. “We certainly wanted there to be a conversation around the environment and climate change,” says Beavers. “Rather than exploring a specific ecological issue, this project is about going back to the epistemological origin of cultural truths—whether a specific lineage of Western science, or the ways in which mythology and origin stories impact how we interpret gender, power, our relationship to the environment—and interrogating these original narratives in order to dismantle implicit biases. Through this interrogation we access a conversation around climate change, yet also around gender and power. ”

The artists cite the work of Donna Haraway, particularly her collection of essays, Simians, Cyborgs, and Women: The Reinvention of Nature, as being of influence. Rettmer explains, “Haraway explores how gendered biases in the field of primatology could have impacted the very stories that tell us men were hunters and women were housekeepers, stories rooted in the agency of the male as driver of evolution….what happens when we re-write or reframe these origin stories? How does this reframing impact the sequential stories that extend from that lineage?” 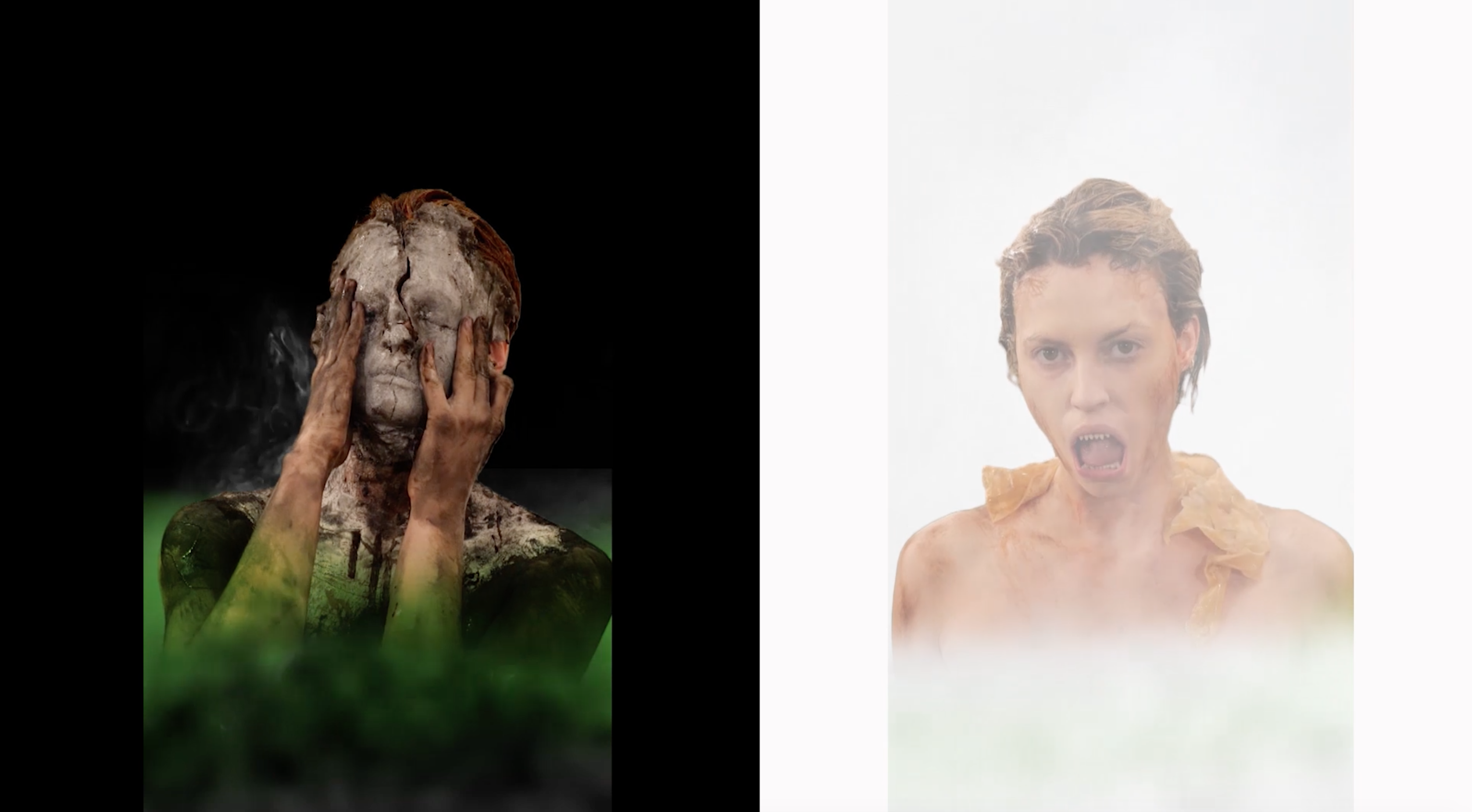 As stories are passed on through time, they form and reform like so many glaciers. We give them new context, and take away our own lessons based on the aspects with which we relate, or in some cases disagree. As human beings, we are the shepherds of our own stories in our own time, and it is our duty to shape their truth in the context and culture in which we exist. The more perspective we have, and the more we share all of our insights, the richer humanity may become.

MELT was on display through March 7th at the Fort Point Arts Community Gallery (300 Summer Street) in the Fort Point neighborhood. More information on the exhibition can be found here

Liked it? Take a second to support William Kryjak on Patreon!