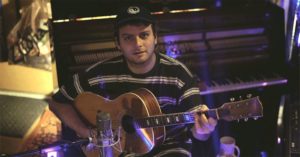 Indie love-child and father of contemporary lo-fi rock Mac Demarco has always been profiled as a bit off-kilter, an eclectic, a weirdo–and his September 22nd performance at Boston’s Orpheum Theater helped reinforce those labels. Looking more like a local fixture at an Allston skatepark than an internationally adored musician in baggy shorts, an oversized t-shirt, and embroidered baseball cap, his tender greeting at the beginning of the show hid the eclectic, rowdy performance soon to follow.

The opening duo of American-born, Tokyo based guitarist Dustin Wong and Japanese musician Takako Minekawa should’ve given the crowd notice that the night’s performances were going to be a bit more unorthodox than the usual indie-rock concert. The two sat quietly together at a table adorned with a variety of electronic equipment and effects pedals at center stage, a barefoot Wong providing rhythmic guitar while Takako shifted between conducting ambient, synthetic melodies and singing -or rather providing an ethereal, organic vocal accompaniment to the instrumentals. the feeling of the opening act teetered on that of performance art, with no hard stops between songs, nor any lyrics to follow. When it ended, almost all at once, I wondered for a moment how Demarco’s headlining performance would work alongside theirs.

The lights remained a heavy blue as Demarco and his four piece backing band walked onto stage to the cheers of a full theater. “On the Level”, a slow and synthy favorite from 2017’s This Old Dog, was the opening song of choice; it felt like a comfortable transition between Takako and Wong and his own discography.

Immediately, Demarco’s personality shown through his on-stage antics, his singing accompanied by stomp-skipping and aggressive mic-swinging that’d give any audio technician heart palpitations. Between most songs, the band would share a hilarious banter between themselves and the crowd. During several moments throughout the night, it felt as though the entire theater had accidentally been invited to a private jam session between the five, their crude humor and ability to riff endlessly on each other’s words an obvious testament to their friendship. This charisma translated beautifully into a seamless musical performance. Demarco’s bright and reassuring vocals were captivating live and almost indistinguishable from the studio. His soaring falsetto on “Finally Alone” was enough to make the concert-goer next to me remind his friend, “You weren’t ready for this.”

Forty five minutes in, after picking up tempo with “Cooking Up Something Good” and “Choo Choo” -along with a several minute screaming session in which Demarco threw off his baseball cap and shrieked like a banshee- guitarist Andrew White asked the crowd if they were familiar with the next song, before doing a vocal rendition of the synth intro to “Another One.” Demarco asked for all the house lights off and iPhone flashlights quickly illuminated the theater, swaying to the soft drum and “ba-bas” of White.

Despite having released his sixth studio album Here Comes the Cowboy just months prior to his Boston show, the night’s setlist was dominated by tracks from 2012’s 2 and, thanks to a double encore, a variety of covers. The first encore began with Demarco returning to stage shirtless, his tee wrapped around his sweaty head and crouched like a mischievous troll you’d meet under a bridge. White took center stage and transformed an upbeat indie concert into a riotous rock cover show, with three Misfits songs and, as the final performance of the night, “Enter Sandman” by Metallica.

It was appropriate to incite the mythological bringer of sleep as Demarco shred his final note, leaving the crowd with a simple, “Okay. Goodbye,” before turning backstage, almost two hilariously chaotic and enjoyable hours later.

Liked it? Take a second to support Eleanor Schiltz on Patreon!