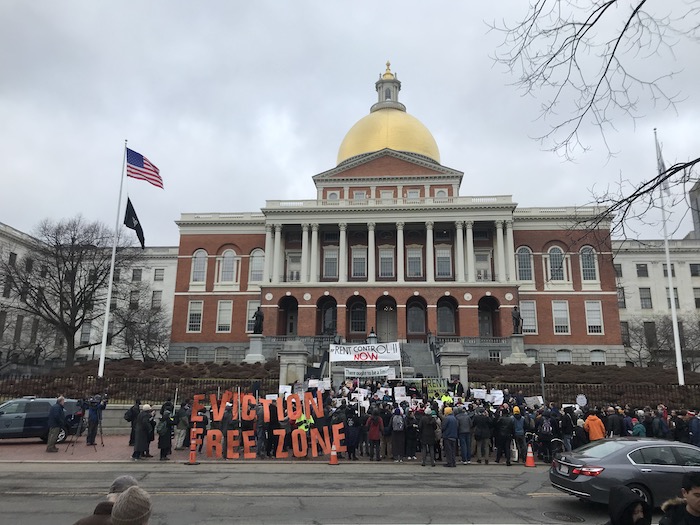 1-14-20 — This past Tuesday, action to support rent control occurred after a landmark hearing on the bill ‘An Act Enabling Local Options for Tenant Protections’ (H. 3924), sponsored by State Rep. Mike Connolly (D- 26th Middlesex) and State Rep. Nika Elugardo (D- 15th Suffolk). Hundreds of people showed up, either to support or oppose this act, which would in effect bring rent control back to Boston, something our city has been without since 1994.  Support for the bill, including the rally outside, was concerned with a range of issues including the reinstatement of rent control, a cessation of luxury development in and around the city, tenant rights, and support/maintenance of existing lower-income housing.

Those in support for this bill were clearly in the significant majority of attendees for this joint hearing, and for the ensuing action. While there were opponents of the bill inside the State House, very few lingered outside. However, during the rally a passerby yelled, “Rent control doesn’t work– just look at New York City!”
He did not stay to wait for a response.

During the hearing, Room 1A filled up quickly and an additional viewing room had to be setup in the Hall of Flags. Supporters and opponents of the bill voiced their concerns in front of the Joint Committee on Housing. Around 12:30 pm, BABAM, or the Boston Area Brigade of Activist Musicians, set up their gear and started to play their instruments. Organizers unrolled their massive signs and pulled out their staple guns as news cameraman set up their tripods and video cameras. As hearing attendees poured out of the State House around 1:00 pm, the sidewalk became filled with supporters of rent control.

The turnout was very impressive and energetic. Over 1.6k Facebook users signified their interest in this event, hosted by City Life/Vida Urbana, Asian American Resource Workshop, Dorchester Not For Sale, Lynn United for Change, MA Alliance of HUD Tenants, and SURJ Boston, among 10s of other community organizations around the Boston area. 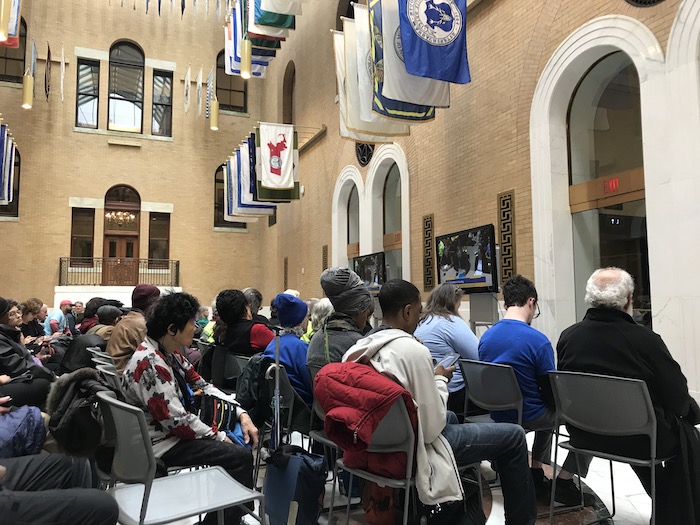 The rally progressed as pedestrians skirted the street and sidewalk, and a cop in his cruiser gazed wide-eyed at the activists.  Meanwhile, numerous speakers addressed an energetic crowd about the the housing crisis in Boston. Organizer Jessica Tang announced through the microphone that “around 10% of Boston Public School students experience housing instability,” and that the housing crisis is “something, educators, parents, and students alike deal with on a daily basis.”

Attendee Neil Rohr, who has been living around Boston since before the rent control ban, said of the situation, “25 years later, it’s a city of the rich and poor — middle income people are forced out.” He went so far to state a solution in lieu of the ‘crisis’ in housing: “support enabling legislation to make a local community decision.”

A longtime Watertown resident, Kay, stated that “Boston is a city for rich people,” and that “commutes for poor people are longer.” 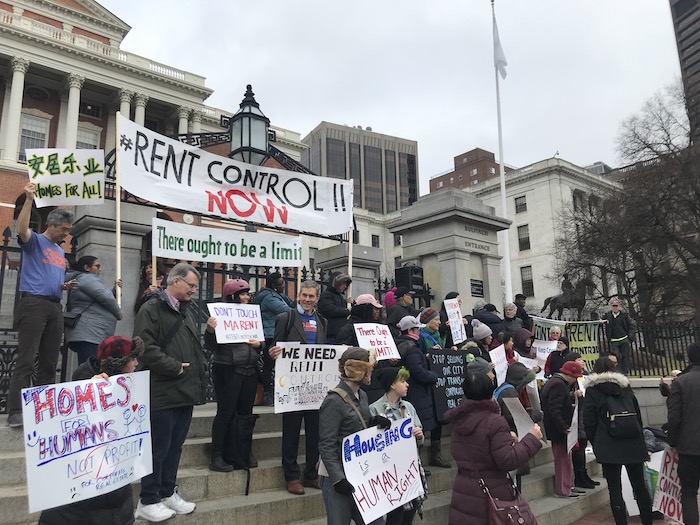 MAHT representative Rose Shannon, along with HUD (Housing and Urban Development) tenant and resident of Hyde Park, Arthur Sutton, spoke with the Boston Hassle about the abusive and predatory ways in which landlords interact with their tenants.  According to Sutton, he was living in Marlborough when rent control was abolished statewide.  “I had no idea what was going on until I started looking for a new place,” he said.  After moving into HUD housing in Hyde Park, he quickly realized that his status as a tenant left him no protection against his landlords.

“Nothing gets fixed until a tenant moves out,” he said, and noted that tenants were frequently blamed for their own complaints.  “If a pipe bursts in your wall, how is that your fault?”

Shannon added that HUD’s history of contracting with private companies allowed the program to rent out homes on expired contracts, which in turn allowed landlords to engage in abusive and illegal behaviors towards their tenants.  The main complaints by HUD tenants included roaches, rodents, and black mold, which Shannon said landlords had a habit of painting over when old tenants moved out.  As part of a MAHT project, Shannon followed up on a 2014 renovation of Georgetowne Homes, where Sutton resides.  She took “before-and-after” pictures of the supposed renovations, which speak for themselves. 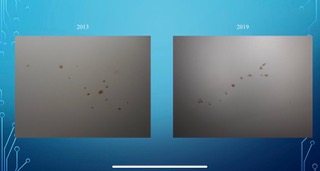 Courtesy of R. Shannon for MAHT 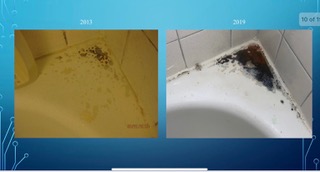 Courtesy of R. Shannon for MAHT

MAHT’s main mission, according to Shannon, is to operate a tenant’s union in the same manner as a worker’s union, with a major emphasis on education.

“People don’t know that they don’t have to live with black mold,” she said.  “ will accept it and won’t know there are other ways of handling things.”

MAHT tenant meetings focus on organization, education, and plans of action.  The organization also partnered with the many groups listed above, as well as the MA Voter Table to bring the rent control rally to the State House steps, in what Shannon called, “a huge partnership.”

Of Bill 3924, Shannon and Sutton seemed optimistic.  Shannon noted that, for the first time in 20 years, Boston’s city council had a pro-rent control majority.

25 years after the abolition of rent control, on a chilly January day, a huge crowd cheered their support for tenant rights in English, Spanish, and Chinese.  Signs were held aloft and the sidewalk bulged with supporters.  It wasn’t hard to share in Shannon’s optimism, but bill H3924 still has a ways to go.  You can track it here.

to express your support for the reinstatement of rent control and tenant protections in Massachusetts, as well as contacting your state representative. 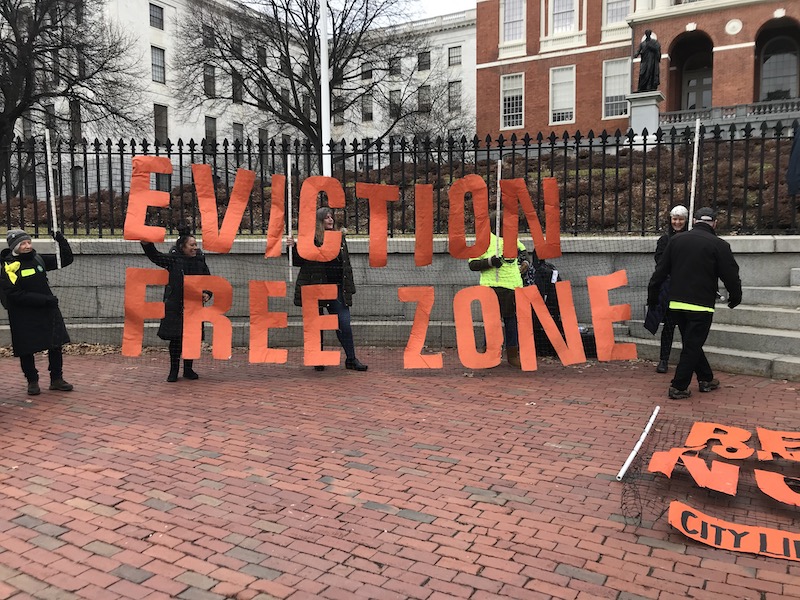 Sophie Lou Yarin is a freelance editor and writer, the editor-in-chief of Bostonhassle.com, and an all-purpose nogoodnik.

Want to write for our site?  Reach out to her at [email protected], or drop a message to @lars.sandwich  on Instagram or @theloniouspunk on Twitter.

Chris Hues is a human & writer from Boston, Ma & Arts & Culture Editor of bostonhassle.com. //// They can be reached at [email protected] or @crsjh_ via instagram & twitter.

Liked it? Take a second to support Sophie Lou Yarin and Chris Hues on Patreon!