This, I felt like, was my FIRST Boston show. I transplanted over here from Seattle in July, and while I’ve been going out and seeing bands, most were bills with a headliner from out of town or Hasslefest which was its own experience. The show at Great Scott Friday night was built around local talent and showed how much this city has to offer. 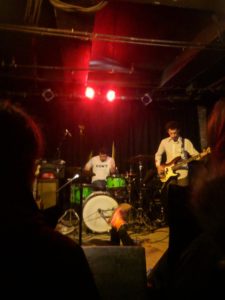 Rong is amazing. I just reviewed their split with Landowner (cliff notes: buy it) and was very excited to see how it translated live. The direct translation is that they played it all flawlessly and they’re one of those bands that the live performance adds dimensions to the recording after you see it unfold in person. The art of the front-person has waned in recent years as most bands tend to just go with the guitarist / bassist singer but when you have someone who only sings and focuses on the craft of singing and the performance aspect of it, it’s an amazing thing. Olivia, the vocalist, completely owned the stage and channeled a manic energy that was captivating. They came in, wrecked shit and then left in the perfect set that had you wanting more.

GO AND SEE THEM ON 11/27 at the Dorchester Art Project! 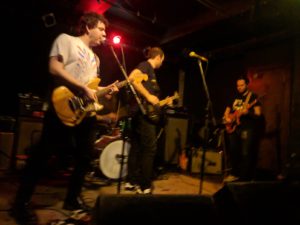 Next up was Nice Guys and I’m not sure if there’s ever been a more aptly titled band. They played weirdo rock and roll with two vocalists and two guitars and looked like they were having a good ol time doing it. It may be a bit of a deep cut, but they reminded me of Frodus with a Pissed Jeans edge to it. I’m a big believer in good bands being themselves and that there’s room for quality bands all over spectrum. A band can treat their music like some sort of uber-serious bloodletting ritual and that can be amazing or four nice guys can get together and have a blast playing some tunes and that can be equally amazing. These Nice Guys bring that good positive fun energy and it translates into the music and the performance. Their set was a blast. 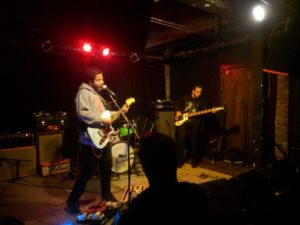 Maneka from NYC was up next and changed up the energy in the room a bit in a good way. I know they were from New York and that the frontman was super stoned from his stage banter in between songs. I think he was expecting some sort of reaction from the NYC announcement but that HXC New York / Boston feud seems to be long dead. Maneka played a reverb drenched set that was strange in all the best ways. Even when they were playing songs that seemed straightforward, the overall tone of the music and style of the vocals made everything sound off kilter and unique. Cutting through the weirdness at all times was a beast of a drummer that kept it all grounded and churning along. They were unafraid to be plodding, unafraid to mark sharp time signature changes and unafraid to end a high energy set on a more ambient song. It’s hard to know who to compare them to. Maybe Clockcleaner or Lady Piss without the gothness? It looks like they’re coming back into town on 11/26 at O Brien’s Pub so I’d recommend you check them out if you missed them this time as they’re definitely onto something really cool. 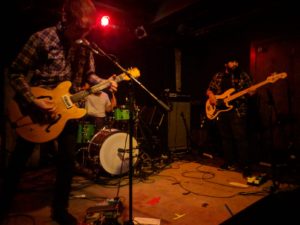 Headlining the night was Kal Marks who hit the stage with a vengeance. Jumping right into their catalog, they had the presence of a band that has been on the road and done this many times before. There is a seasoning that bands get once they’ve put in the years of work grinding together that’s unmistakable. There’s a comfort with being on stage and playing their music that cannot be faked or replicated. Sometimes it comes at the cost of rawness or energy but Kal Marks is in that perfect zone where they have that unquantifiable quality and have lost none of the passion. They played a great set of newer and older songs without ever taking the foot off the gas.

If this show was my baptism into Boston local music, what a show! I hope it’s representative of all the cool shit happening here and I think it is. This was a fantastic night of music to a great crowd.