If it is possible for a work of art to sag with enthusiasm, it is because Rosie Ranauro has made it so. Ranauro’s solo show at Aviary Gallery, entitled “It’s Not Time For That”, is a meditative yet unrestrained frolic through the conscience. Each piece strikes the viewer as a kind of flitting, strobe-like beam, illuminating the mind’s darkest corners in the warmth of Ranauro’s chosen palette. The walls of Aviary pulse with bright, bending figures that spill out of their loosely-drawn borders, packed to bursting with the force of emotion behind them. The exhibit is an encoded experience, drawing from Ranauro’s “personal language of symbols and repeated motifs” to connect to the viewer’s own internal chatterings. Ranauro describes her work as “a gentle call from the self, to the self, to say: ‘don’t go away, stay here, you’re here right now in your body. It’s not time for that.’” The nature of “that” is open for interpretation. To me, the show read as a feedback loop within the self, output turning back on input meant to draw our attention to what, as Ranauro’s first piece joyfully proclaims, “We Already Know!” 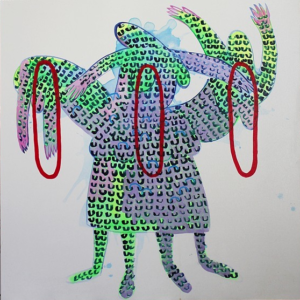 Ranauro is an artist who engages in play in order to articulate pain. She guides her viewer with botanical motifs and bright circles towards a familiar tangle of warring sentiments inside the self. The cyclical messaging of a “from the self, to the self” system must by nature eat away at whatever dominant mental narrative might usually be in place. To put color and texture to a process that is both restorative and deeply destructive is an intimidating prospect. In the face of this challenge, Ranauro refuses to shy away from the more glaring or potentially overwhelming aspects of a world rendered in a gradient of deep fuschias, bright blues, or electric greens. The piece seems to almost frantically flag the viewer down. Returning to this piece after viewing the entirety of the show, I recognized it as a kind of psychedelic herald, bracing the viewer for a confrontation with the self that comes to a head as the exhibition progresses. The piece also showcases the tones and shapes that are staples in Ranauro’s work: rounded shapes, porous borders, and a deft use of different concentrations of acrylic paint. These components send the eye scrambling to focus on a foreground and background that swap and slip, that are one and the same.

The piece “A Part of You” forces a similar recalibration. It hums, electrified with feeling. I first understood the piece to be two amorphous figures clinging to each other, though Ranauro describes it as a singular figure, which “wraps and unwraps as parts of the whole come together.” One part is rendered in the soft strokes of yellow paint, with slight shadows but few sharp edges. The other is constructed from a leaf-like motif. The two connect at mottled, pink flash points, which reveal a sense of tension even in this tender embrace. 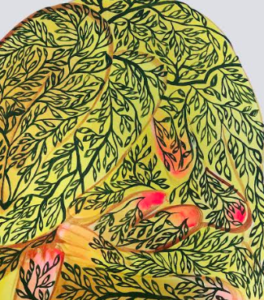 A lesson that many have tried to instill in me came to mind immediately as I first approached “A Part of You”. Those familiar with battling negative self-talk may recognize it. When you identify the sharp edges in your own thoughts, those pink flash points at the places between who you are and who you think you should be, try to picture delivering those same hurtful words to a younger version of yourself. Oftentimes, envisioning the kind of pain we inflict on our adult selves spelled out in the primary colors of our childhood can have a disarming effect. Ranauro’s work makes it clear that the self is composite, that parts of us are capable of holding other parts. So, really, the two figures are at once separate and together, and both are undeniably “A Part of You”. This particular piece amplifies a kind of collision among the parts of us that are growing, shifting, wrapping, and unwrapping at different paces. The entire show balances a distinct eroticism with gleeful hues reminiscent of a childhood finger-painting session. That is, Ranauro is not afraid to get messy. She may wield her bright palette with abandon, but she retains a clear sense of intention about her work. Her choice of acrylics allows a childlike wonder to bleed into the thoughts and feelings of our adult selves. While we often think of adults as caretakers, Ranauro’s work suggests that it may be the more childlike impulse in us that invites connection within the self. The figures in “A Part of You”, a muted mosaic of black lines and harsher edges entwined in the soft glow of its yellow counterpart, articulate the colors that swirl around us as we curl around ourselves.

The most visually striking piece in the show is a wide expanse of unstretched canvas: “A Specter of Me (Loving Me)”. Here, propped up on floral legs, seem to be the figures from “A Part of You” in a different state. Ranauro lends a mythic sensibility to her work, giving the familiar, leaf-covered creature deep greens and a nymph-like shape. The figure turns back towards another being, bathed in the bright pinks and yellows that were tucked away in “A Part of You”. The two still reach for each other, and the thought that first came to mind was: they look like they’re leaking. A trickle of water droplets flows from one figure to the other and mingles with the leaves, which themselves reach outwards. While there are slightly clearer boundaries of form in this piece, no one component is ever fully closed off from another. This leakage doesn’t quite read as a violation of space, but there is a sense that constant overlap is almost inescapable. Even the figures themselves, in varying shades and weights of acrylic, contain multiple people, plants, animals, appendages, all overlapping in what seems like an almost comical chase across the mind. While the “stuff” within our brains cannot help but overlap, there can be (as Ranauro’s other work also acknowledges) significant friction. The continued tension between the two figures highlights the resistance that can come up when the self confronts, well, itself. 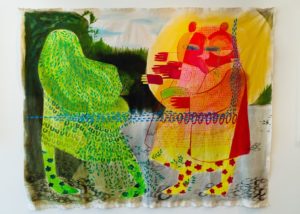 Rosie Ranauro, A Specter of Me (Loving Me), 2019, acrylic on canvas. Image courtesy of Rosie Ranauro.

Ranauro’s style follows a legacy of pop art pioneered by artists like Yayoi Kusama. Along with her contemporaries, Ranauro relishes in the dissonance between introspective content and explosive, technicolor form. Her willingness to make private, internal struggles unabashedly public effectively disarms her audience—radical transparency is contagious. Moreover, while Ranauro’s art is certainly self-reflexive, she elevates its impact by explicitly connecting her pieces to the physical self. As a part of her residency at The OU Gallery in British Columbia this summer, where she first began work on “A Specter of Me (Loving Me)”, Ranauro chose to work specifically with un-stretched canvas. Writing about “A Specter of Me (Loving Me)”, Ranauro explains on her website: “ was an exploration of concept of ‘wear and tear’ and preciousness, and a forced confrontation for myself in my anxiety around loss, as it relates to both painting as a medium and the body.” Ranauro’s commitment to engaging fully with her work, both physically and mentally, enables the piece’s sentiment to transcend its raw edges. By placing the shapes of her own body in conversation with the canvas, Ranauro further animates the push and pull of self and “specter.” 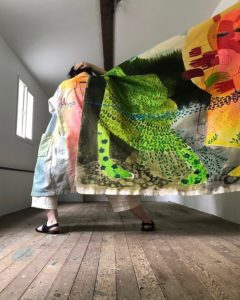 Ranauro with A Specter of Me (Loving Me), during her residency at The Ou Gallery. Image courtesy of Rosie Ranauro.

“It’s Not Time For That” puts our senses on high alert. Ranauro blurs the line between the interior and exterior self, collapsing and protracting our composite parts in a dizzying display of personal confrontation. However, the exhibition also contains a gentle sensibility that prevents our thoughts and feelings from kicking into overdrive. One of my favorite quotes from Yayoi Kusama is a description of her trademark: the polka dot. “Round, soft, colourful, senseless and unknowing. Polka-dots can’t stay alone; like the communicative life of people, two or three polka-dots become movement […] Polka-dots are a way to infinity.” Ranauro’s works construct a colorful, communicative world that enables the tenderness required to confront the multitudes within us. They reach the viewer like a series of polka-dots, flashing morse signals that call for an intimate and intentional reacquaintance with the self.