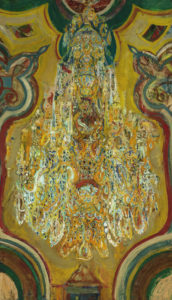 I went to see the Hyman Bloom exhibit at the MFA and I was totally surprised and delighted.  Bloom took Egon Schiele’s tentative strokes of the purpling bruise-and-scuff of the body, the reddening imperfections around the knees and under the eyes, and infuses it with violent lime green slashes and amoebic rings of pale blue.  The result is at turns nauseating, violent, splendid, lush, and always utterly human.

Hyman Bloom (1913-2009) was born in Russian-occupied Latvia and emigrated to Boston with his family in 1920.  He grew up in the West End, where he planned to become a rabbi, but eventually wound up studying at the Museum of Fine Arts.  In the ’40s and ’50s he developed some critical notoriety, with institutional interest coming from places like MoMA and The Whitney.  Though critical response was warm, part of Bloom’s legacy is his rejection of fame.  He objected when Jackson Pollock referred to him as “America’s first abstract expressionist,” and though he sponsored and mentored other artists around Boston, he spent the latter part of his life creating art in Nashua, NH, where lived until he was 96.

In Bloom’s more abstract sketchwork, he seems to start with the gestural form of, say, a sleeping woman, and then covers her with another form of her lying with arms outstretched, and then he’ll draw a beetle on her back, and then he’ll draw her sleeping again in thicker, more definitive lines.  Bloom’s finished product, whether done in oil or pencil, forces the eye to summarize the form as if it were regarding a time-lapse photo. Motion is everywhere; the subjects stretch, shiver, beckon, and contract. 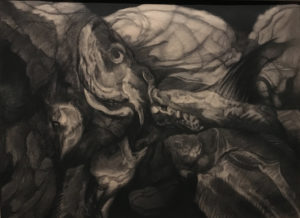 Bloom’s most well-known period favors the grotesque, painting only cadavers and abattoir fodder in thick, oily strokes.  His fascination with the sterility of death holds a juvenile excitement to it, and his paintings reflect a mad urge to reanimate dead flesh with color and vibrance. They give the viewer pause. 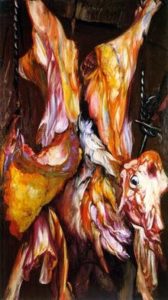 He reaches his zenith when he incorporates the multi-form process into his studies of cadavers.  I was struck by a full-size portrait of a dead woman situated next to one of a man. The woman is naked except for a hospital; headscarf, her corpse covered in amoebic ringworm spots, a sickly glow cast about her.  The man is a violent clash of oranges, purples and greens–all uneasy hues to see on the human body. Both forms depict the nature of the death: sickness for the woman, and blunt trauma, or perhaps drowning, for the man.

Instead of being portrayed as slabs of flesh, a head hung back in stifled anguish or a chest cavity open and taunting, Bloom forces the viewer to consider the biography of the corpse.  While the forms are fixed, unlike in Bloom’s sketches, the colors clamor with each other, creating a narration of living, aging, and decaying skin. They’re as dead as the cadaver studies, but their humanity is considered.  Bloom is not necessarily tender with these two subjects, nor is he defiant. But, undeniably, he has lent these discarded forms some care and consideration. It’s hard not to be touched. 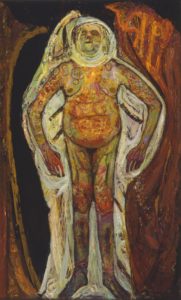 Bloom was described by Time Magazine as conducting “a hermit-like existence in a Boston slum” during the height of his fame, and while the postwar abstract movement flourished in New York, Bloom chose to stay in our city, and was thus left out of history’s pantheon of brand-name abstract artists.  Yet at the MFA, Bloom’s work persists as a kaleidoscopic time capsule, and it’s hard not to feel a sense of poignancy when walking through each room.  Bloom is Boston’s boy, an immigrant’s son, a man of introspective and solitary inclinations, a heretofore-undiscovered treasure, and a master of intense, methodical chaos.  In the end, it becomes clear that his lack of wholehearted participation in any aesthetic”wave” has lent him the clarity of purpose to create tender, striking, violent, and beautiful work.