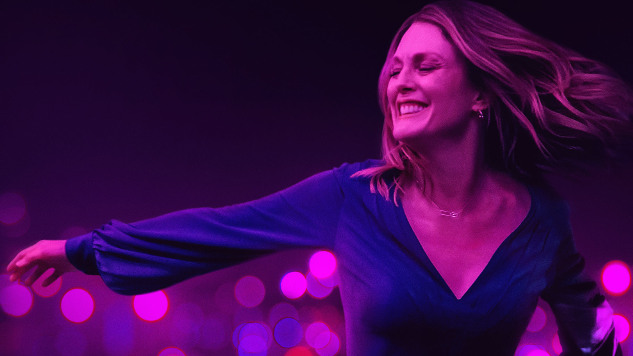 Gloria Bell is an American take on the Chilean film Gloria, with director Sebastián Lelio at the helm of both films. Gloria, played by Julianne Moore, is a divorcee, but her marital status doesn’t weigh her down. She embraces her life by dancing her way through it — at the disco, in her car, in her relationships.

Moore gave a Q&A following a Coolidge Corner screening of the new film. A BU alum and 2019 Coolidge Award honoree, Moore proudly declared that her first viewing of David Lynch’s Eraserhead was at the Coolidge, and she discussed what draws her to specific roles: the dramatization of the ordinary.

“There’s more drama in an ordinary day than all the things we can make up,” said Moore. This especially rings true in Gloria’s life, including her relationships with her family, her boyfriend (played by John Turturro), and her volatile upstairs neighbor.

Gloria is the mother to two adult children (one notably played by Michael Cera) who claim they don’t need her help. She is an insurance agent who deals with constant complaints. Her upstairs neighbor has breakdowns every night as she tries to sleep. Her eyesight is starting to go. A mysterious skinless cat keeps appearing in her apartment.

And yet, even though Gloria is lonely, she isn’t unsure of herself. She sings along to love songs in the car — Moore emphasized how important it was that the songs be joyful. She partakes in laughter therapy classes. Most notably, she wears sparkly silver dresses to the disco, where she meets Arthur, Turturro’s character.

Arthur, who is recently divorced, falls in love with Gloria, but she quickly learns that with him comes the baggage of his demanding, helpless adult daughters and his ex-wife. Their relationship is fraught with frantic calls from his daughters begging him to come home. When introduced to Gloria’s family, Arthur silently slips out of the room and back home to his own.

He then relentlessly calls Gloria, until she decides to give him a second chance. Moore described this as Gloria’s emotional self trumping her intellectual self. Gloria knows she shouldn’t allow him to come back, but she finds herself whisked away on a trip with him to Las Vegas, where he yet again leaves her in the dust. Sean Astin, who is weirdly playing the dad-type role now, scoops her up, and she wakes up in a hungover stupor on a lawn chair, missing a shoe.

Moore laughed as she recalled one viewer telling her that the movie was reassurance that she could be as screwed up in her 50s as she is in her young adult life. Moore discussed the how important it is for her to bring regular characters to the screen as we see “less dramatization of what’s familiar and more dramatization of what’s not.”

Gloria Bell is a celebration of the drama of every day life, and a woman who embraces it.

As a newcomer to acting, Moore didn’t do much research for her roles. As her career progresses, she finds herself doing quite the opposite, she said. “It’s like being an anthropologist, but with better clothes.”