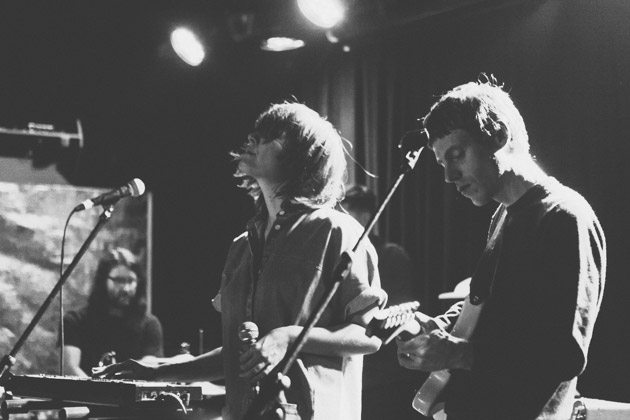 I went into the Middle East for a drink and after sitting and after taking a few gulps, three fine boys with beautiful Welsh or maybe Irish accents huddled next to me. Not only did their gentle candor catch and delight me but I noticed they all somewhat triumphantly threw down drink vouchers and began discussion of beer. And so after a few moments to work up confidence, I excitedly asked “are you playing tonight?” They all smiled cheekily and said “Yes!”

Tim Presley and his band took the stage around 9pm this Monday at the Middle East Upstairs as an opening act for Cate Le Bon. These were some of the characters I had met in the bar earlier. There, in the back was the drummer who had Sam Adams. The piano and guitar player off to the side had stuck with Hefeweizen. Cate Le Bon herself was thumping bass and Tim Presley was in the middle executing the crucial vocals and guitar. The band looked noticeably vibrant – they wore white shirts and skinny blue pants. Tim went a bit further and painted his face a pale white, his lips deep red. He was looking positively withered; ghostly and definitely there but also somewhat washed out against the rest of the lights. Although he is an American himself, he seemed to be hinting at some kind of European annunciation, an effect that softened and charmed up his frantic vocal lines. That set was loud and jolly. Although it was kept mostly clean and not so dissonant, the moving parts, the endless variations on rhythm, the locked up, right on the beat grooves were paranoid and perfect. Each player fit into their own section in an amazing show of coordination and grace. When one released, another entered. When one chord moved up, the next moved down. There is something mechanical about Tim’s music – an exactness in the details and it is kind of mind-blowing. After the set, I asked someone in the audience what she thought about the music. She reported that she came as a Tim Presley fan and was interested in the change in direction from White Fences more “rockin” energy to this very angular, and in her words, “very Bowie, very Barrett” direction.

After about an hour, the set ended and then 20 minutes after that, all but Tim returned to the stage. The mates from the bar had come back but they had also shifted around. The piano player’s was on bass, and the guitarist was on the keyboard. This time they were dressed in all black. Cate commanded the center of that stage and was, can I say, dangerous? Jet black hair. Soft black trousers. Winged eyeliner that framed her eyes and brought her nose and her chin to a point. There was a serious look out at the crowd. I wrote up a piece a few months ago about her new LP “Crab Day”, one of my favorite records of 2016. This set included all the whimsy and deliciousness of that album but in a harder, darker interpretation. They played a little bit more behind the beat. There was a juiciness and a fatness to the guitars that I didn’t necessarily pick up on before. It came off as more dance oriented and social whereas the album was perhaps a little bit introspective and jangly. Musically, there is something silly and innocent here that somewhat rejects what is considered ‘acceptable’ or ‘proper’. Exactly as done on the album, the arrangements were extremely jagged. It wasn’t exactly math rock but there is interesting experimentation here with shuffling through different kinds of feels and emphasizing on odd beats. The last song “What’s Not Mine”, the colossal anthem to dead eyes and growing old, was probably the most aggressive example of interesting, mind-bending repetition. It hurt me a little bit. I was holding my gut. It refused to shove, existed for maybe a century. Cate strangled her guitar through fuzz and overdrive and then the bottom gave out.

It’s interesting to note some of the similarities between Tim and Cate’s sets. Both shared bandmates – the boys from the bar. The two have collaborated before and the sounds were both edging at this very angular, old school, early Pink Floyd, more buoyant Talking Heads sound. But this is not to say there wasn’t variety. Where Tim was frantic, Cate’s set was frenetic. What Tim tasted in a retro, psychedelic flavoring, Cate imagined with massive force, something slicked back and having fullness of tone. Together, I think they mark a serious and inspiring movement towards new sounds in Pop music. They are a living musical community and the ideals of helping, collaborating and hammering away just seem essential to both of these bands visions of how music could sound. The encore was, appropriately, a duo of just Tim and Cate – a crushingly beautiful ballad that was full of chord movement and organ sounds. As they left, Cate lovingly caressed Tim’s back and they both set off, smiling, hugging, to greet fans. The boys at the bar probably went back.

image above: Cate & Tim as Drinks, London 2014 (by Rachel Juarez-Carr)