Boston’s First Annual Butoh Festival saw an eager community at Green Street Studios in Cambridge this past weekend. Three days of workshops and two nights of performances welcomed nearly 200 visitors from Boston and beyond, many of whom were magnetized by visiting artists Yuko Kasei from Berlin, and Zack Fuller and Emily Smith from New York.

Butoh, also butō, is a Japanese theatre dance that engages forms of movement, techniques, and motivations that are specifically meant to be ever changing and therefore capable of representing the darkest and lightest forms of inner and cultural life.

I’ve heard many times about butoh, “you either get it or you don’t,” and this seems true and very important of the art, in that the dance is not always meant to be enjoyed or even beautiful. For that reason, butoh is considered an underground art, best witnessed by a meditate audience willing to endeavor a range of emotions, impatience, discomfort and awe. 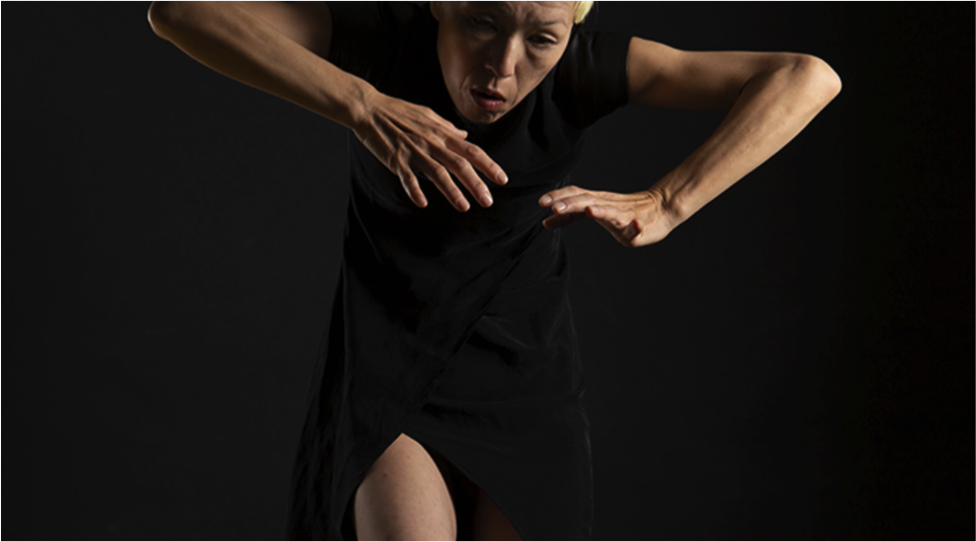 Friday night’s performances consisted of six student solos from the Boston Butoh Group, which took the form of structured improvisation on various themes.

The show opened with Melanie Hedlund’s “HOOLIHAN,” a nod to the westward bound rambling fool, who walked out as a horse in cowboy boots, only to drop the shoes and be blown about at the whim of the wind, swinging as a marionette. The following performer, in “Otter Encounter,” Roxanne Morse came out swimming in a costume that looked like water; we witnessed her otter character in the midst of daily routine: bathing, chewing, and floating down the river. In the third piece, “Liminal,” a taunting goddess of forest divination, Gem Rosenberg, hunched with branches in hand and face painted white, performed a primordial witch character primarily through a diversity of grueling and pleasurable facial expressions.

During an intermission, we asked the organizer when there would be time for applause, and we were told that during butoh performances applause it typically left until the end to maintain a meditative atmosphere. Sketch by Vlad Fillitovich of his “Metamorphosis”

The fourth solo, “Metamorphosis” by Vlad Fillitovich, told the story of a piece of meat from life through death. Naked and pale, he crawled as animal, eventually hanging himself upright as if skinned and frozen, his feet nearly weightless below his body. The following solo by Ira Gorodestskaya, “A Lone Creature,” also evoked animal characteristics, this time, an underwater eel that found its way out of its home using alien senses to navigate the vast underworld. The show closed with an improvisational duo, Ofri Rieger in elongated thrashing and tumbling, and Walter Wright feeding her movement with a mix of sounds made from common objects.

Saturday night performances drew an even larger crowd. Many audience members claimed that they had no idea about the festival until just a few hours before the show. In my mind this is all in the magic of butoh: it is the folks who are meant to witness the art that arrive just in time.

The first of the two-part show, “Twisted from Constantly Watching Doves,” was a highly structured improvisational piece composed by Zach Fuller, in collaboration with Emily Smith, and musician Michael Evans. The Twisting commenced with a five-minute percussion solo by Evans, who entered the stage in prostration, adorned in an outfit that evoked a mushroom-picking wizard. Sounding a variety of drums, common objects, and pattering feet, Evans rummaged through the equipment creating a landscape of dislocation.

Soon, Fuller and Smith entered from beneath the curtain, bent but flowing in step with one other, they steered a crooked improvisation, each taking their turn in the lead. Fuller remained on stage and in a similar character for the duration of the improvisation. He bended, twisted, shook, lifted and fell his body gradually into postures of sideways gazing and puzzled perspective. Smith wandered around him, on and off stage as well, at a more frantic pace; she crawled, leaped, rolled, and bended as if a breakdancer with a case of the shivers. At one point she evoked a relieving laugh from the audience as she bounced on her hands and knees with her tongue out as if an eccentric robotic dog. Headlining the show, and the weekend, visiting butoh artist Yuko Kaseki, performed “SHOOT JEEZ MY GOSH,” a piece choreographed in the inspiration of outsider artist Henry Darger, that tells a story of the opposing characters and attitudes that live in the collective imagination about war. Becoming a flip-book animation, Kaseki switched between playful everyday motions at robotic tempos, gradually speeding up the drill as if demanding a child to pose for another photo. The audience was simultaneously captured by the sonic accompaniment, a well-timed collage of guns, violence and military voice-overs. Together the sounds and steps conjured the magnetism of a violent scene from which it is impossible to look away.

Kaseki ran as if on strings tracing invisible lines on the stage, always in a militant fashion. The character continued to transform from child, to soldier, to victim, and beyond, embodying violence from many perspectives, pointing a finger towards the audience; next she was shot down in front of an unforgiving fluorescent light. Every time she returned to action, she was violated again by rounds of ammunition. In a moment of striking self-exposure, she turned the violence explicitly on herself, pointing her finger down at her shadow creating a native phallus. Her identification with violence continuously shifted, she turned on her own head where her canvas dress fell inside out to reveal tattered camouflage. As she held her undone outfit in surrender, we were again reminded of her senseless transformation from child to soldier to victim. The piece ended with the sounds of children playing ball, Kaseki hurling a weighted balloon back to the voices, until the game ended in complete exhaustion and retreat.

Boston sits in anticipation of next year’s Butoh Festival. Biggest thanks to Sara June for organizing the festival and passing on her butoh lineage through classes in Cambridge, and Mobius Artists Collective for co-sponsoring the event. For now, we ought to keep our eyes and ears open for movement performances that feature wide styles, topics and perspectives. It is important to keep the art of movement storytelling alive as it offers an expansion of formalized dance, narrative and beauty.