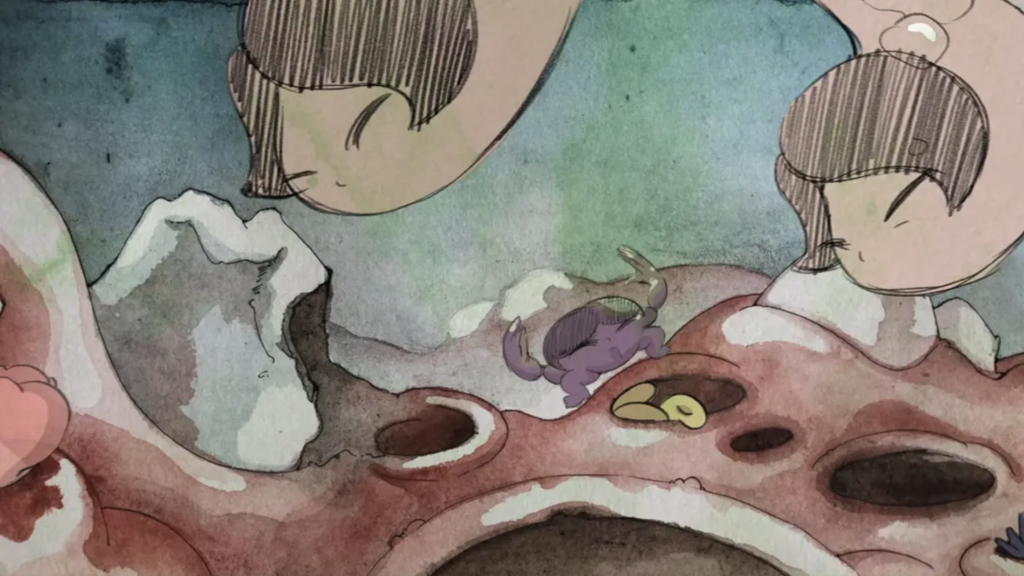 BWFF opened with Reneepoptosis, an animated childlike experience incorporating dark twists of concepts not meant for children; like child’s play in a beautifully crafted wasteland.

This animated short was unlike anything I’ve ever seen before. A series of hypnotically captivating visuals, coupled with the poetic voice-over in a format expected by the audience to be blissful- and comfortable.

Something that was funny while watching this film was the countless moments where you want to be grossed out (amidst the very convincing sound effects of… let’s just say gross things) but you can’t, because you respect the craft too much.

It was an animated masterpiece, with beautifully subdued and consistent stylistic choices, incorporating watercolor and texture.

The entire film was living and breathing, and there wasn’t a moment of escape from the world that Renee created.

The F Word packs a large story into a tiny package of 3 minutes, diving into the intimate moments within a family home. We open to a suburban family dressed in maroon and surrounded by a contrasting bright green, moments before they are getting their family photo taken. Small and intentional movements from the actors and minimal information within the frame starves our eye- yet speaks loud. Very early on we are brought deep into the lives and tensions between this family, and the difficulties they experience.

Small scenes tell us a large story about who they are– and we as the audience can see ourselves in all of them. 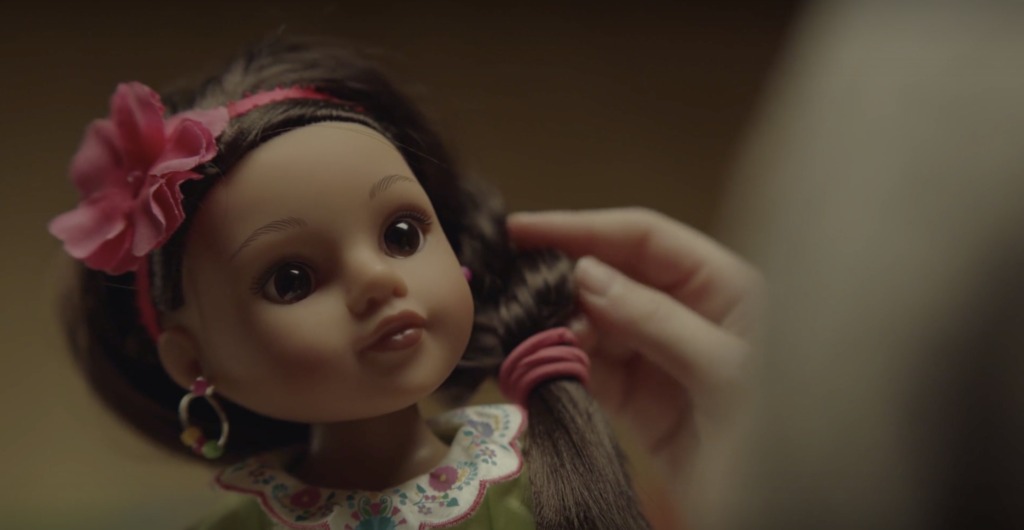 “A” My Name Is speaks about limitation and childhood, through the eyes of a self aware child suffering from illness we can presume is cancer. She views life through a window, that window often taking the form of other’s intimate lives. Moments that expose her to life’s struggles and mortality- to a life outside of confinement.

Lara Aquel’s cinematography is soft and intimate, incorporating the bright colors of childhood artifacts within the beige and sterile environment of a hospital. There are countless moments where the deliberate usage of color within the frame is impossible to ignore in its thoughtful choice.

Similar to the opposing themes in Reneepoptosis, this short film showed us all-too-familiar childhood escapism aside what most of us could never imagine, immobilizing chronic illness.

Instead of her illness holding her back, it makes her contemplate more critically life and its significance. We are shown how her illness grants room for attention to things most of us grow up too distracted to notice. 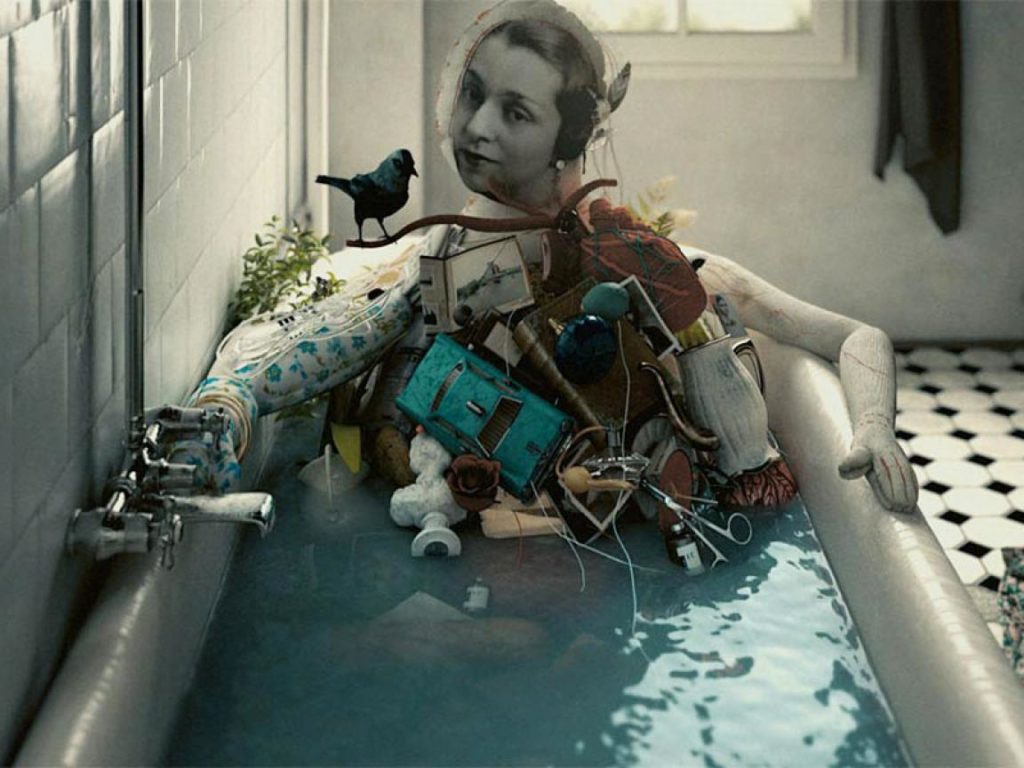 The Call was a mix of live action and animation, telling its nostalgic story of the lifetime of a mother.

The duration of the film felt like a surrealist dream, through a mix of sounds that are real and those that aren’t, diegetic and nondiegetic.

The Call alluded me to a piece by Emily Diana Ruth, What a Young Girl Should Not Know, in its usage of communicating concepts through the medium of stop motion sewing and fabric to reinforce meaning to the visuals. It is truly a beautiful and immersive form of animation that blends live action with surrealism, thoughts with emotions.

During one scene of dancing, I was left feeling like I had just watched an entire marriage from start to finish.

The short film brings light to the idea of clutter; clutter not just in its physical context but in life experiences and baggage, the things we acquire and the escapism we practice amidst it.

A Celebration immerses the viewer into the experience of moving to a new country, and merging with a culture unfamiliar to your own. This short film created an inviting space for empathizing through the eyes of a child named Ada who is pressured to change who she is because of school.

We feel how she feels she has something to hide at lunch eating her “dolma” (middle eastern cuisine), and when she is singled out in class inquiring whether or not her family celebrates Thanksgiving.

This short film exposes us to both the child and adult perspectives of immigration. We get to know Ada and her mother, and how this struggle that they both experience begins to raise tension in their relationship. We feel the pain that they both experience, how their pain is projected on one another; but ultimately, how in the end it is through each other that they find safety and security.

This struggle is all too common, and we are shown how it can tear apart a family and a normal way of life.

This short film was full-body chills inducing, and a seed for planting thoughts that lingered long after.

Sh’hab was a beautiful story about a young girl enthralled by the stars, opening with a prodigious shot of a starry night, inducing thoughts of Interstellar. The visuals themselves were otherworldly; cool refreshing colors present in an exhausting hot desert environment.

Even a shot of a dead fish hanging on a rope was the most gorgeous color scheme, glistening and reflecting in sunlight and detaching its own context.

It is in this way that Sh’hab gives us the gift of exposing the beautiful colors, concepts, and culture of locations most of us aren’t familiar with.

Sh’hab definitely delivered some sci-fi vibes, lots of blues and countless camera-pointing-straight-up-to-the-sky type shots. I really enjoyed that part of it.

A very unignorable aspect of this film was the incredible scoring. The epic orchestral scoring was like I was brought right into Skyrim (if anyone knows Skyrim, players listen to the soundtrack on their phone- or maybe I just do).

A very notable aspect of this short film was, lastly, its climax. During the climax of this film (I won’t dare spoil it) let’s just say: our protagonist does not call for help. We as the audience are thinking,“Oh, this child is totally about to learn a lesson and be saved by someone.” She is not saved. Instead she stops, thinks, and succeeds because of her struggle and determination.

Sh’hab was about dreams and the accomplishment of them. The feeling I got after viewing it was just wow. Over and over in my head.

The films of the Boston Women’s Film Festival spoke about family, mortality and familiarity. The performances from children were thoughtful and sincere in leading roles that make you forget that these children are actresses.

Furthermore, the performances left room for projection by reinforcing youthful perspectives on concepts that we think we know.

There wasn’t one film in the line-up that didn’t evoke full body chills in me.

I have huge respect for the creators that poured their heart into these thoughtful and touching stories, and it was an absolute privilege to be a part of viewing this festival.

Liked it? Take a second to support Adia Stark on Patreon!