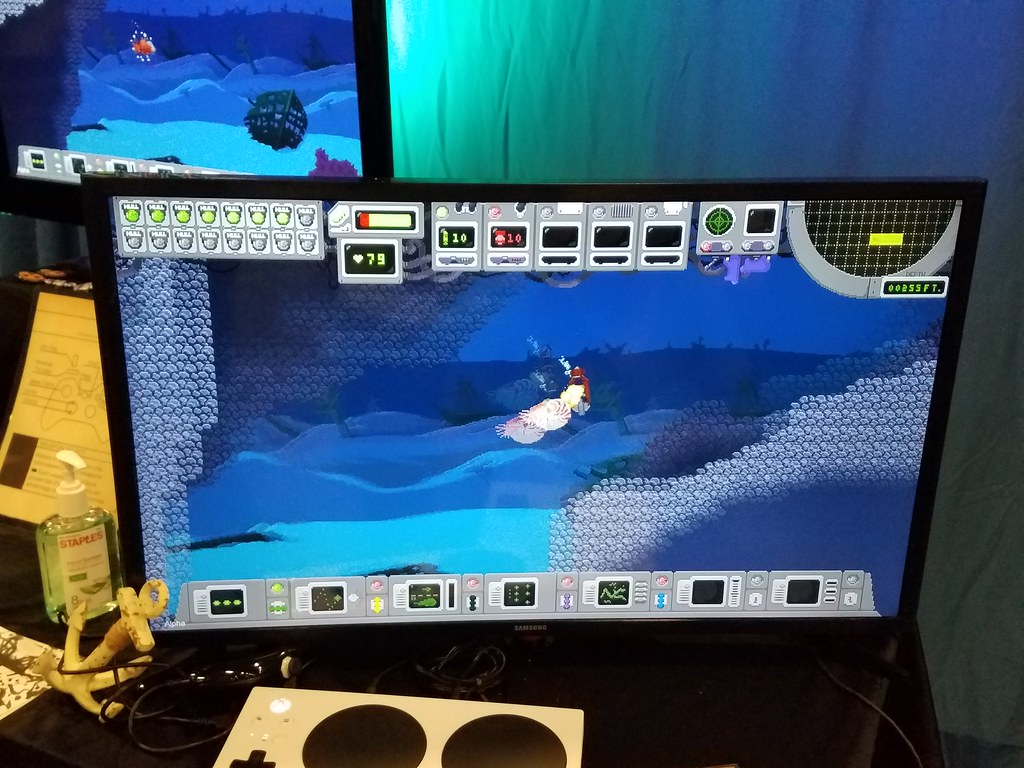 For a crash course refresher to my admittedly frozen in time gaming knowledge, it made a few boatloads of sense to visit the birthplace of video games itself, MIT, for the seventh annual Boston Festival of Indie Games. Inside the campus’ grand athletic complex, dozens upon dozens of independent game designers exhibited new titles, of both the tabletop and digital varieties. Not only was it electrifying to see the vibrant, interdisciplinary creativity of all these underground developers, but the fact that a large portion of the titles exhibited were yet-to-be-released works in progress gave off a feeling reminiscent of when a favorite musician plays new, unheard songs at a show. With the sheer volume of creators in attendance , attempting a complete recap would be an exercise in futility, but there were definitely enough standouts to cobble together some kind of report, so here’s a look at my highlights from Boston FIG 2018:

This innovative title from Montreal’s Kitfox Games mashes up classic elements of dungeon crawling action with a non-heteronormative take on the dating simulator/visual novel genre. At the Figgie awards, Boyfriend Dungeon won both Best In Show: Digital, and the prize for Innovation in Art & Narrative.

I think it stems from our creative director, she’s played a few dating sims but we realized that its always usually like a male player character and then all the female characters are very heavily sexualized, so we wanted to make something that’s more inclusive that anyone can play. You can be any genders, you can date anyone that you want, and we work with a lot of queer people. We collaborate with a few people who are non-binary. We have a trans person on our team, so it really just made sense for us to include all those people…We also wanted to be a healthy depiction of healthy relationships, and, you know we’re a diverse studio, so in terms of representing people of color, that’s another consideration we had. We wanted to make sure we had a diverse cast of people from different backgrounds.

DIY Auction House places the players in competition to win the specific, desired auction lot types, with an easy to pick up, difficult to master dynamic. “The aim of the game is that you’re given different contracts of finding different commodities at the auction house, and you’re both the people working there and the people bidding there,” summarized lead gamemaker Kevin Dunkelberger. Demoing a prototype, the game mechanics seemed rather solidified, with both simplified and more advanced rule schemes. “I think its currently ready for any publisher who would want to do it,” commented Dunkelberger on the yet-to-be established release window.

Montreal’s Barnaque put a non-traditional spin on the platformer style in more ways than one. “It’s a platformer without platforms. That means that you fall infinitely and you can’t touch anything. You can’t land on any platform. So all the blocks that you see in the levels are deadly. If you touch them you die instantly,” explained developer David Martin. Central to its playability is a wraparound mechanic, where the player enters one side of the screen by exiting the other. As Martin puts it, “its like a labyrinth. You have to maneuver yourself inside the level and get to the goal in each level.” The intense, addictive challenge combines with a psychedelic, Net Yaroze-style hand drawn aesthetic, where you play as concept rather than a character. Still in development, Infini is currently only playable at events, but is worth the trip.

What sets this platformer aside is its control scheme. The player can move forward and back, but must harness the recoil from the character’s weapon to jump. Easier said than done. Sophie Games, a team of MIT students have been working on this for roughly two semesters and, for the time being, playing it is an event-exclusive experience. Graphic artist and MIT computer science major Carolyn Lu said, “we currently don’t have anything set up but we’re thinking of just putting up for free with what we have right now, and maybe we’ll work on it a little bit more but we haven’t really decided.”

Could this be why they invented touchscreens? Fireflight casts you as a firefly who must navigate an increasingly complex series of obstacles to connect the dots between lanterns, and other goals. Savonius, the demoing member of the dev team, recounted, “We actually started together while we were in undergrad. We’ve all since graduated. It’s been a few years, but we’re still making this game together.” Fireflight is currently a work in progress for the enjoyment of showgoers, but prospective players may want to get in touch with Speedy Chalupa for further early access opportunities. Savonius continued, “Over the next few months we’ll be rolling out closed beta for IOS and android. You can go on the website and signup with just an email address, really nothing more, and we’ll be in contact sometime soon.”

Take away the hustle and competition and just be; just see and decide for yourself how you feel. This is the essence of Fleeing Forward, a title that challenges the accepted definitions of a game while not challenging the player to do much other than think about what they’re seeing.

The fact that it’s not narrative or not would be more based on the player perception, but it’s definitely an experience and not a game in the traditional meaning. Precisely because we’re in this non-scoring and we made something highly based on immersion, impressions, and sensations and emotions, more than on a game mechanic and the rewarding system that’s the base of most all game systems now, which is like trying to have the player do something several times and rewarding you for doing it,so its not based on rewards. – Sound designer & composer of Fleeing Forward Max Romain

The freeform experience borrows from left-field hidden gems like Linger In The Shadows (PS3) and LSD:Dream Emulator (PS1), with the emphasis on player interpretation instead of developer prescription. If the in-game soundtrack catches your attention, its also available on bandcamp. 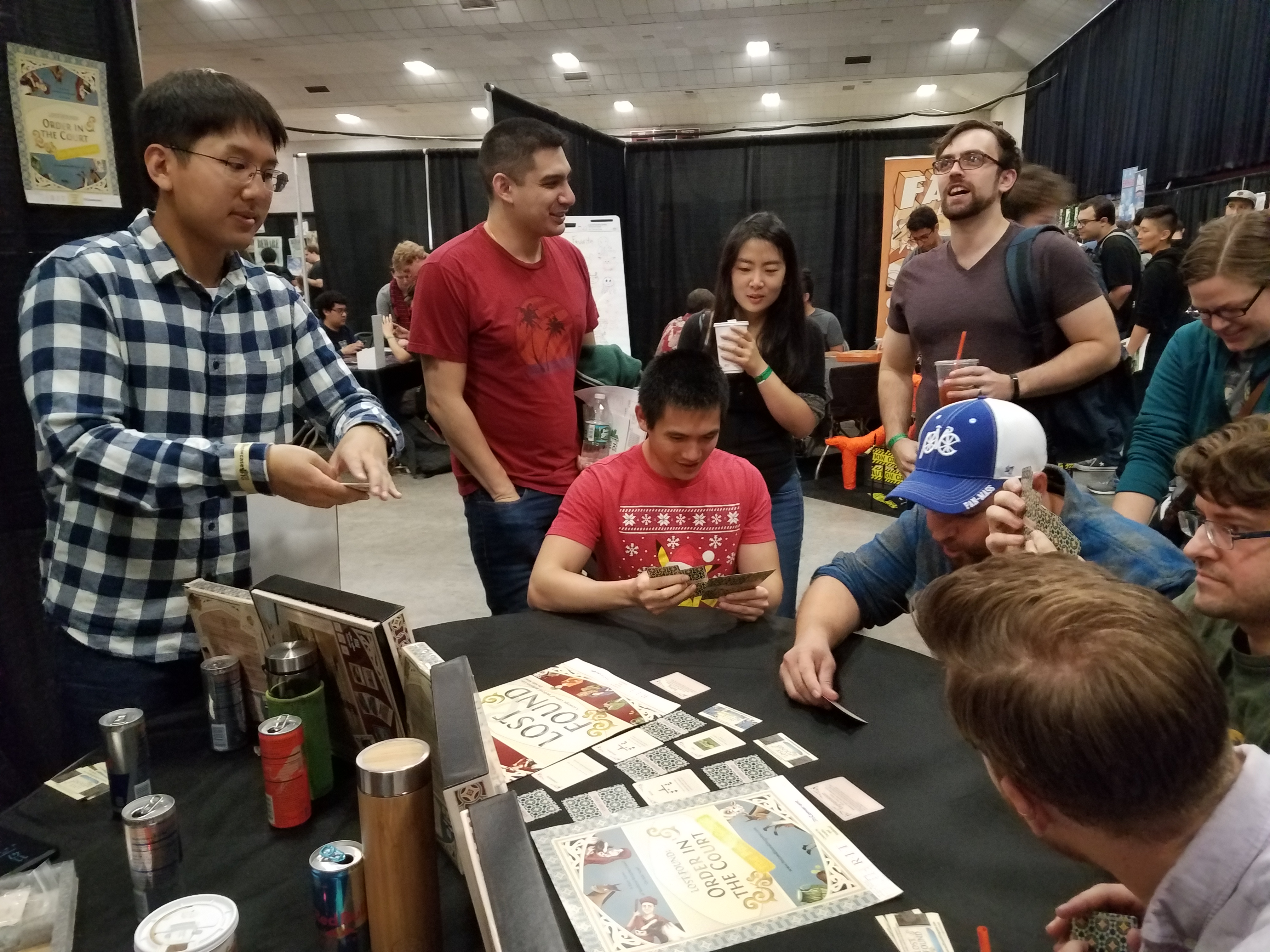 This series of games teaches players about medieval religious legal systems, with an impressive dedication to historic accuracy. “ based in 12th Century Fustat. We chose that time period because in that time period, in that place Muslims, Jews, and Christians coexisted in the same place, so all the laws are intertwined with each other, and its very interesting to study that,” said team member Satch Puri. The first game in the series challenges players to fulfill community needs while still taking care of their family. Puri continued, “if you’re only doing tasks for the community and ignoring your family, you will help everyone else win , but you will be the one who loses, so its about balancing your resources.”

The second game, Order In The Court, blends creative storytelling with real legal history in a shorter party game format. Puri elaborates on this game:

A judge reads out a ruling card that has an actual court ruling from the 12th century, and the other players have to use their story cards to come up with a backstory for how that court case might have got to be a court case in the first place. So, how did two farmers go to court? What happened that two farmers went to court over a sheep or a donkey or a dead chicken, and people usually play this for humor, and if people are interested, on the back of those ruling cards is an explanation with a citation of what was the real rationale behind that law.

The Lost and Found series is currently being tested in a New Jersey high school as a bona fide learning game. Furthering the mutli-cultural scope of the project, the Mishneh Torah based titles are to be followed by an Islamic law based expansion in the near future.

Proving that AR has more benefits to society than catching ‘em all, Scott Doxey presents a poker sim that puts the table wherever you want. The learning curve here is nowhere near as steep as a real life casino outing and the game will appeal to novice cardsharks. As Doxey put it, “You don’t need to know how to play poker to play this.” While Flip Jacks is currently in development for mobile platforms, Doxey hopes to port it to VR after a sufficient level of feature implementation.

Synthrally is a sort of nuclear air hockey game for up to four players. Also showcased at PAX , Synthrally boasts a cyberpunk aesthetic and a supercharged shot. In this game, you don’t score on your opponent, you smash them to bits. Bet you cant play just once.

Making quite a splash at this year’s show, Depths of Sanity takes a bitcrushed look at submarine action. “Underwater Metroidvania is how I describe it,” said dev team member Owen Leach. “ An easy to follow control scheme and an advanced weapon select mechanic combine to broaden the appeal of what might be one of next year’s top retro-style titles. “We consider the build we’re showing off to be Alpha, but you can download at home and play at depthsofsanity.com and you can play the same demo you play here today.”