12/21/19 — The modern-day Massachusetts “Big Four” thrash metal/hardcore acts marked the death of a remarkably dismal decade at the sixth anniversary sermon of a DIY-booking crew’s success on an abnormally balmy December Saturday night at O’Brien’s.

Grayskull Booking’s Aaron Gray is at home in these sepulchral dives. The mantra is crafted by a metalhead for metalheads, with booking shows from the perspective of ambitious underground up-and-coming acts that speak to outcasts and hooligans.

Spanning the dingy depths and dives of the Boston area, Grayskull made its bones in 2003, booking gigs for local and national acts in basements on Ashford and Pratt Street in Allston, and at Great Scott, ONCE, Brighton Music Hall, The Middle East, The Sinclair, and Royale, wracking up a rep through word of mouth.

“I always booked shows for my own bands,” the Salem-bred stalwart said. “We never burn bands and we do well by our friends. We do high production shows all the way to throw-and-go gigs. We also do our best to get local acts on the bill to support national touring acts. It’s amazing. My wife came up with the name.” 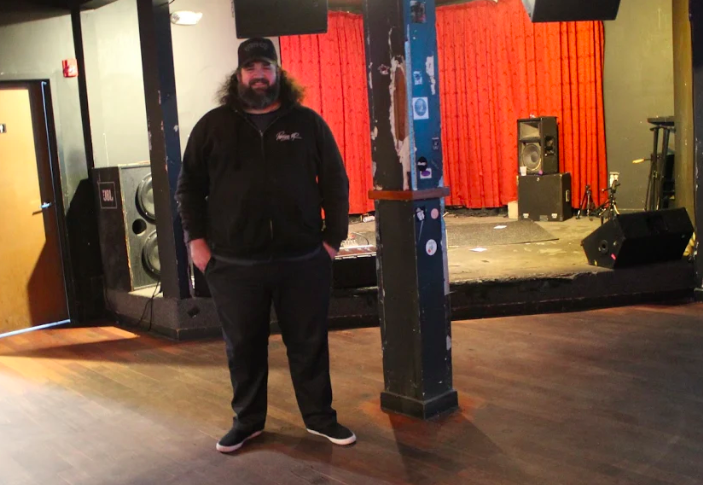 Aaron Gray Taken by the Author

Lay Your Weary Head to Rest, Face First on Bed of Razors

If you’re not up on Central Mass’s Bed of Razors, put your shoes on and catch up. This ain’t no bed of roses. They came to rip up the bedrock out of the unsuspecting Earth.

They and Face First cranked out the rugged riffs paired crucial crunch that would make any folded-up flat-brim hat/jean shorts/Sambas sporting old school crusted over punk proud. One such enthusiast was an outrageously tall man from Mumbai who told me that this was his premier American metal show.

Bed of Razors made sure to make his first time feel special, as this was their first Boston show as well.

Ritual Blade singer Taylor Ginsburg belts out a bellow that I have known since boyhood.

In 15 years of friendship, I can’t recall a 6-month span where he was not actively making music. Being on the receiving end of Ritual Blade’s brutality is a ceremonial experience. These punk rock high priests do not have a lazy song.

“Gonna write some more, record some more, hopefully a label will pick something up ,” the Maine-based reefer farmer said. “It would be cool to rerelease the back catalog, and maybe a little tour in 2020.”

Winners of the 2019 Boston Music Award for Metal Artist of the Year, Black Mass brought it on home.

“2019 was a good year for us with a new release and a bunch of tours through a few different countries,” they declare on their Facebook page. “Going back into the studio next year to do it all over again. Got a little demo sample of the new album on the way as well.”

“I hope this stays the course and the newer generations find a home in punk rock like we did as kids,” Ginsburg said. “It’s basically spinning gold from shit, but that’s what hardcore is when your a kid and that doesn’t change in your 30’s.”

Grayskull is going strong into the new decade, continuing their crusade to fill up calendars at Boston area dive bars.

“A lot has been dumb luck and determination,” Gray said. “We have great contacts who know I will do right by the bands, the venues and the scene. It would be great to have more venues work with us. We just want people to enjoy themselves and keep the spirit alive.”

Feature photo taken by the author.

Liked it? Take a second to support Nate Homan on Patreon!