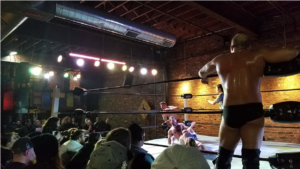 “Dirty Daddy” Chris Dickinson is leaning on the corner of the ring a few feet away from me, and from where I’m standing it’s impossible to watch the match without also getting an eyeful of his glistening back, covered in flowing sweat that catches the stage lights perfectly. But despite the overpowering view of the Dirty Daddy’s sweaty, hairy, musculature there’s a faint, pleasant smell of fruit: someone’s casually puffing a hookah at the bar while watching the match. Beyond Wrestling picked a great home venue for their new weekly show; Electric Haze’s combination of bar, hookah lounge, music venue and (on Wednesday nights through July) pro wrestling arena makes a fittingly absurd setting for the show. At ringside, in the center of what’ll be a dance floor the rest of the week, Dickinson watches his tag partner Bad Boy Joey Janela endure a leg lock and encourages the crowd up to cheer on the Bad Boy. Both wrestlers already have sleazy in-ring personas, so tonight they’ve formed a tag team with the delightfully slimy name ‘Slither’, and the audience is loving it.  They’re having fun alternating between chanting “Slither Fucks” and filling the room with loud snake hisses.

This is the second episode of Uncharted Territory, and it is absolutely fun as hell. I missed Episode One, but you don’t need to worry about knowing storylines beforehand….the fans make it really easy to figure out who to cheer for, going wild at the first note of an entrance song or loudly booing at characters like MJF, who enters the ring wearing a Burberry scarf before declaring that he’s better than you, and you know it. It’s a pretty typical card for Beyond, featuring a mix of returning indie favorites like Solo Darling, a 5’ 3” wrestler that gets big cheers for flipping guys easily twice her size, and ex-WWE pros like Gangrel, who had dental implants to give himself vampire teeth in the late 90s and continues to drink (fake?) blood before matches to this day.

Aside from being hilarious and weird, the antics also serve to really accentuate the shockingly grounded nature of Beyond’s shows. After posing for the camera during her heavy metal intro, Solo goes to her corner and jokes with a couple green haired kids ringside. When they’re done working for the night, performers hang out in the corner to have a ‘gansett and watch their friends’ matches. You get a real sense that everyone here gives a shit, from the ringside fans pounding the mat to encourage a wrestler in a tough spot, to the wrestlers, who often deliver impromptu speeches thanking opponents for great matches and fans for their support. After the first match, Beyond boss Drew Cordeiro comes out and hangs off the ropes in basketball shorts and a hoodie to thank the audience for coming out, and to declare he’ll keep running these shows, “every single fucking week, from now until the moment I die!”

Admission is $10, and tickets are available at the door or online at www.BeyondWrestling.com (be warned, episode 1 sold out)