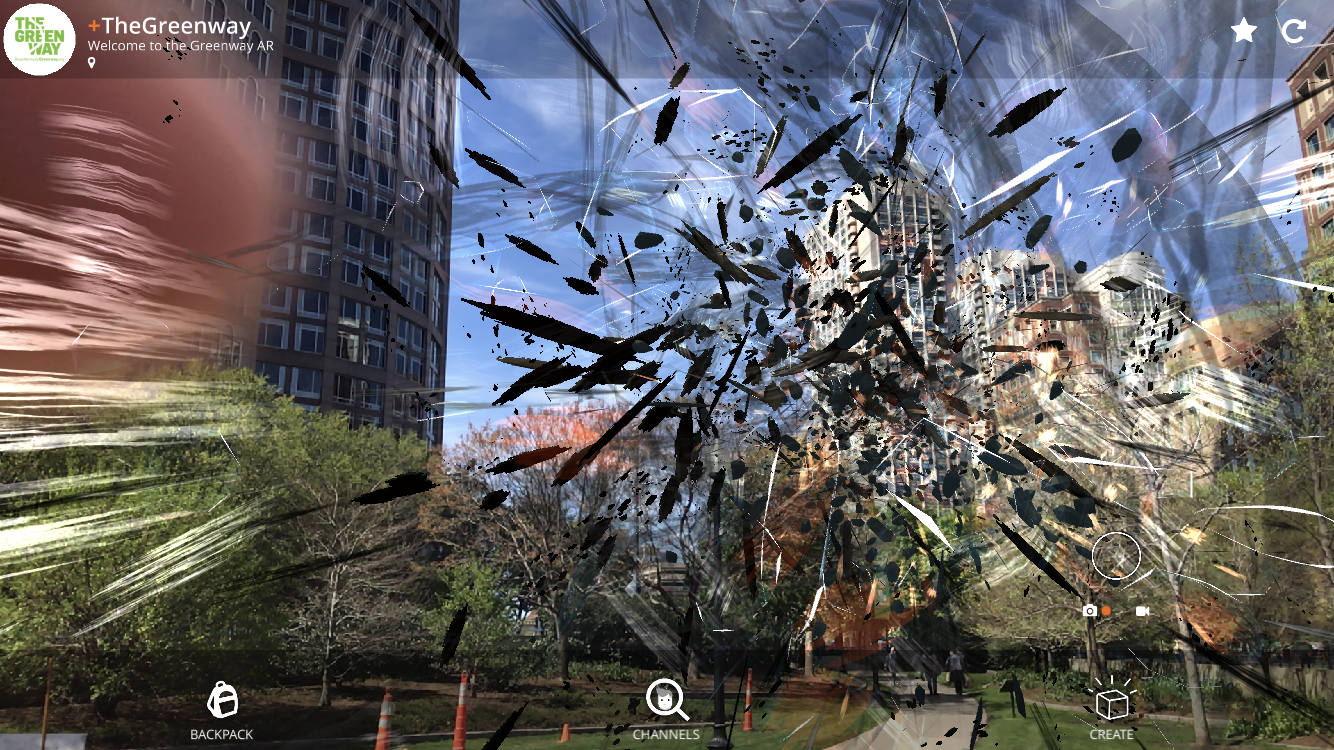 The other day, while bankers and young professionals took their food truck lunchbreaks and tourists asked each other directions to Quincy Market or the Aquarium, I took a walk down the Rose Kennedy Greenway with my smartphone in front of my face. I’m not used to being perceived as one of those people walking around Boston filming everything, and so the gaze of my phone was sheepish, not lingering too long on a luncher or sightseer in case they felt scrutinized. Actually, I was looking for things that no one else could see, because they were part of the ongoing Greenway Augmented Reality exhibit — in which several artists have created installations which /aren’t actually there/. 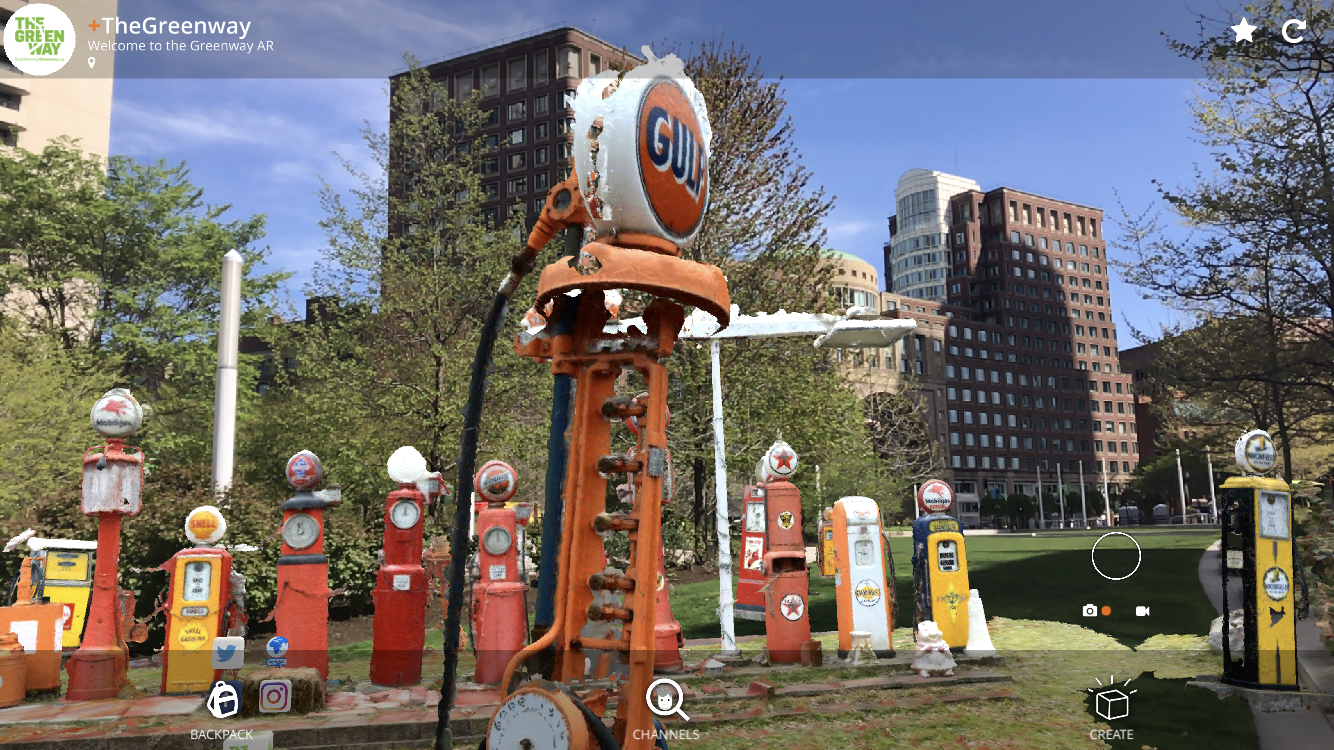 Organized by the Greenway Conservancy and Boston Cyberarts, the Augmented Reality exhibit is a part of the ongoing Autoshow project, an exploration of the Greenway as an axis of urban motion both historically and in today’s Boston. It features works of traditional visual art and sculpture as well as historical information both in real life and within the augmented reality exhibit. Among the Augmented Reality works, Greenway-goers may encounter: Fossil Fueled, a row of antiquated gasoline pump stations by John Craig Freeman; Car Drop-V, a large SUV created by Will Pappenheimer that falls out of the sky above the viewer and explodes on collision with the ground; and Speed and Collision, two abstract reddish-blackish clouds of pure motion (or stasis) by Nancy Baker-Cahill. These last two works seem to mimic most closely the general experience of being in the Greenway — caught somewhere between anxiety and the peace that passes it — but in all of the works there is something foreboding, an allusion to inevitable doom, the paradox of a coastal city bringing about its own climatological destruction just by doing what it does best. 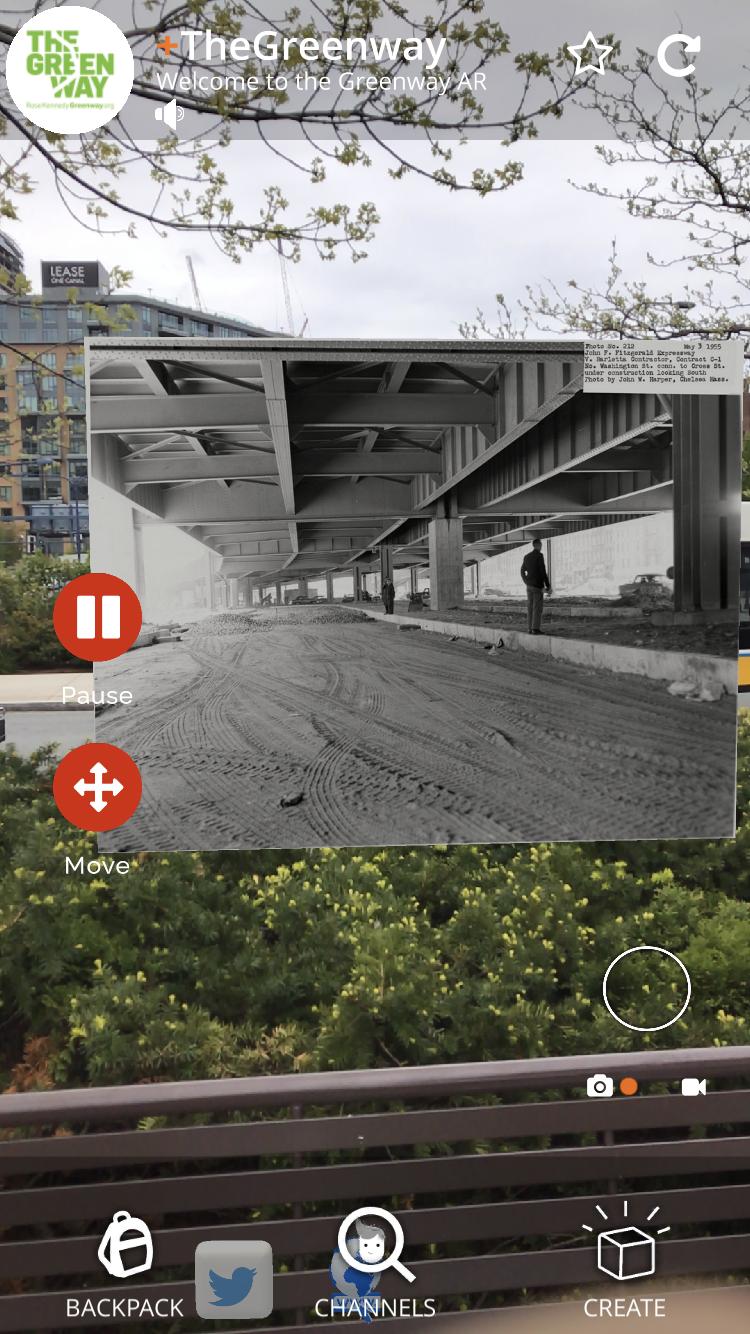 Having installed the Hoverlay app created by Nicolas Robbe, I was equipped with the power to tap into an extra level of the Greenway, much like the original Central Artery it once was: a magic obverse that contains the dreams of its denizens. What does the Greenway invite us to dream about? For these artists, these were visions of motion, movement, and transport. For them, the Greenway as artery, as flowing current, as emblem of our Boston dynamism, is key. But in the act of stopping to check out these works there is also a sense of serenity — of having taken refuge in the green from the endemic urban motion. From this place we are safe to consider the hustle with a critical eye: these arcane gas pumps that clink and ding and block my path, what are they good for? This automobile that bears down upon me: why does it have to collide with the earth and fill every corner of the green with debris? At the Greenway we are given space to remember ourselves within this hyperactive world. There is time now for you, a rookie urbanist clairvoyant, to notice what’s really (and unreally) in front of you.

More information about the Augmented Reality exhibit at The Rose Kennedy Greenway can be found here.