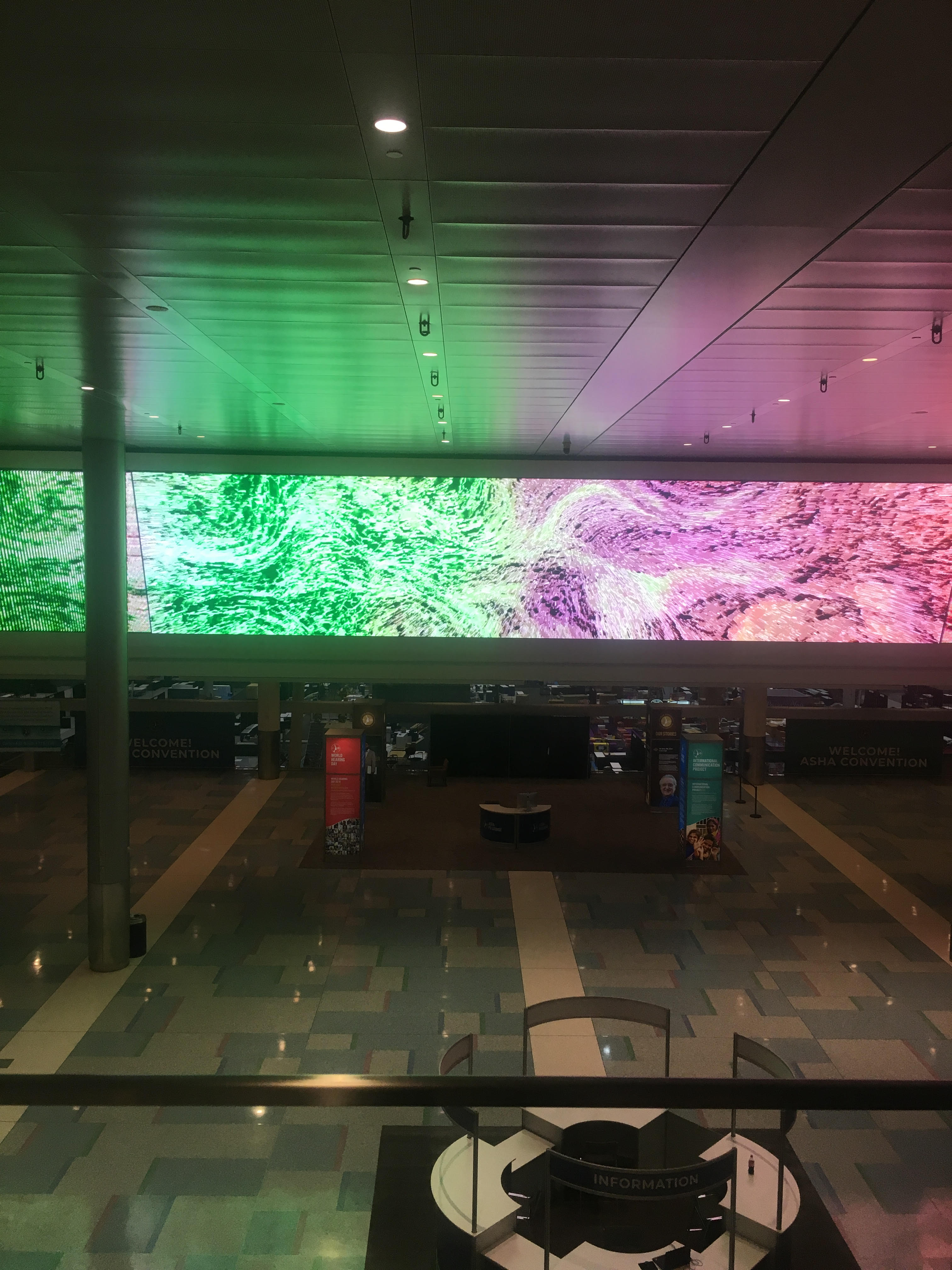 It doesn’t matter whether you’re in Las Vegas, Detroit, or New York City — a brightly lit marquee takes any and every unsuspecting viewer to that bygone era of when entertainment and pop culture were colloquially referred to as “showbiz” and transfixes all of your attention for the next couple of minutes. Even in the wintertime, against a brute breeze or plenty of snow on the ground, we still pause to look up, gaze and wonder.

That is because marquees can also tell a story; the most magnificent example could be the Saks Fifth Avenue department store in New York City. Along with debuting their thematic holiday window displays, a light show is screened on the front of its building. Best viewed once it’s dark outside, hundreds of tourists and shamelessly festive New Yorkers gather together to watch.

Here in Boston, Art on the Marquee is just as eager to stop you in your tracks. Their event is equally as ambitious, whereas it is presented on a much humbler scale: an 80-foot-tall LED screen that awaits you outside of the Boston Convention and Exhibition Center, located in the Seaport, and can be seen as far as half a mile away. The prediction is that 100,000 pedestrians will get to observe Art on the Marquee’s currently initiated 25th round.

Art on the Marquee is developed and organized by Boston Cyberarts, and the nonprofit organization has been solicited by the BCEC’s Massachusetts Convention Center Authority to create a media art exhibition. As Cyberarts President and Director George Fifield shared with the Art on the Marquee opening reception audience last month, “We did not come to them, [with this request. The MCCA] asked us to do this. They sought us out because they wanted our art on the marquee,” which was succeeded by a few “Whoos!” and a deserving round of applause.

Boston Cyberarts began in 1999 as the Boston Cyberarts Festival. Aware of the rise of experiential art, computer art, animation, and home video, new gadgets and tools, and while the Internet was still in its nascent phase, the festival was launched as means to give voice and space to emerging and underground media art creators. Though the festival stopped in 2011, Cyberarts has extended itself other means such as exhibitions, events, education, collaborations, public installations, and a gallery in Jamaica Plain.

“We had been working with the convention center and programming their marquee for the last seven years,” Fifield said. “During that time, visitors to the center, whether while on the stairs or from the entrance, would see this beautiful, beautiful screen, [the marquee outside], and ask, ‘What about this screen?’ That’s how [Art on the Marquee] came about.”

During the opening reception, held on Nov. 13, the 10 commissioned media art video shorts, or vignettes, played on a loop inside the BCEC’s three screens that are above the main convention floor. From 6-8 p.m., opening night guests and artists were treated to the quotidian platter of fruit, cheese, and veggies, and most excitedly, a make-your-own ice cream sundae bar.

Boston Cyberarts supports all forms of artistic expression with a technological edge, but for Art on the Marquee, a video short was the ticket in. For the open call, interested artists turned in a storyboard, a description of their idea, a resume, and an online link to past work, “to judge whether or not they were for real,” Fifield said. A group of BCEC members and the Cyberarts team evaluated 30 applicants to get to the final 10. 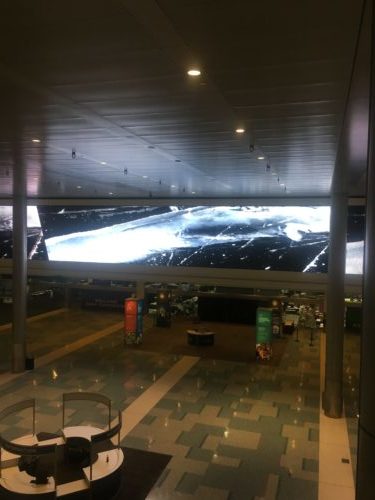 Mid-way between my own first sundae (yes, first), I chose to sit down on the walkway, directly across from the three screens, seance-style, and observe all of the shorts.

The first I remember really enjoying was A Day at Walden Pond by Corey Corcoran. His was a calm, watercolored drawn tribute to the Concord lake. It’s famously connected to essayist, poet, and Concord native Henry David Thoreau and, notably, his 1854 text “Walden.” Though Corcoran chose mainly muted pastels and neutrals, his work appeared exceptionally bright onscreen.

Andrew Neumann’s Seven Drive-In Screens gave the bygone staple of viewing the latest cinema offerings a blitz of hyperkinetic activity, as, on the screens within, mirrored, holographic images flashed furiously. (Perhaps this was a nod to his work and interest in electronic/interactive music production, as was included in his bio.)

None of the 10 shorts provided audible dialogue or music. If you thought you heard something, it was faint. What Art on the Marquee did intensify, in so many images, was a discernment for their audience’s take away from having seen the world, atmosphere, or aura envisaged by the artists behind the shorts.

And how in a limit that feels like 60 seconds or less, were these shorts created?

“[My work here tonight] is a part of a larger body of work and is a series called The Human Garden,” Lani Asuncion explained. The recipient of the Dame Joan Sutherland Fund grant is the SMFA at Tufts University’s media arts manager. Her short is entitled Human Garden Growing.

“I used biodata and sonification devices to obtain energy from plants, and it read their rhythms and electricity, just like we have in our bodies. Their currents. I then put that through a mini-device and turned it into music [for the short]. So [Human Garden Growing] is more of a formal visual exercise.”

Returning to the same spot I was in, with my second (and last) sundae — hot fudge and all, in tow — I was, here again, to make sure I had seen all 10 of the shorts and to catch what I might’ve missed the first time. It was then I realized that the loop began with 1000 Years. Admittedly, I did not get a chance to speak with all of the artists present at the opening reception. In spite of that, I’m taking a gamble on the possibility and belief that W. Benjamin Bray and Mark J. Stock’s short was the most complex showcased, on the grounds of its storyline, history and politics, and purpose.

In their clip, the color scheme is salamander orange, azure, royal blue, and black. Minus the black, the other colors are presented as the sky and huge ocean waves that collide among each other. Once settled, black dots appear at the top, only to succumb to the bottom one by one or in small groups. Stock, a scientist, first introduced himself, by joining me seance-style, as the co-creator of 1000 Years and said that his media art partner Bray was also an oceanographer. Later in the evening when I met Bray, I unknowingly invited myself to experience his lively, incredibly self-aware, eager to dispense, profoundly good energy.

“Global ocean circulation is driven by temperature, salinity, and wind. When certain currents bring water towards the North Pole, the North Atlantic, it gets saltier and saltier and colder and colder. It gets heavy. It gets so heavy that it becomes heavier than the water beneath it, and so it sinks. This is called downwelling,” Bray imparted in passionate detail.

“All throughout the globe, and the Northern Hemisphere, we’ve got these areas of the ocean that are really cold, salty, heavy water, and it sinks. For every place that it sinks, somewhere else in the ocean is upwelling, is rising. That sinking, that downwelling combined with the upwelling makes overturning. Basically, the ocean is flushing out every thousand years. That’s the idea of 1000 Years. I wanted to focus on the entire ocean, versus the part we only see.”

Just in time, as he had ventured into global warming, in connection to the ocean, him and Stock’s short played again in the background. It was a lot to take in, but Bray doesn’t speak rapidly to the contrary. He is paced and speaks pointedly about what he has researched. He added as the black dots in the video traveled downward, “There it is! In this context, the ocean is very bright. But in reality, the ocean is very dark, relative to our knowledge of it. And the ocean may be relatively deep and dark, relative to our understanding of it. But we’ve found Budweiser cans in the deepest parts of the ocean. We’ve found trash at the edge of the ocean where it’s hardest for us to explore.”

Bray then delivered a quote that he desperately attempted to remember when we first began talking: “So while the ocean may be deep and dark, it’s very shallow, relative to our influence.”

Art on the Marquee is live from 7 a.m. to 10 p.m. daily at the Boston Convention and Exhibition Center. Art proposals for the 26th Art on the Marquee are due Dec. 9. More information can be found at http://www.artonthemarquee.com/

The 17-year-old social media star (and MetroWest local) on the responsibilities of art, fame, family, and humanity