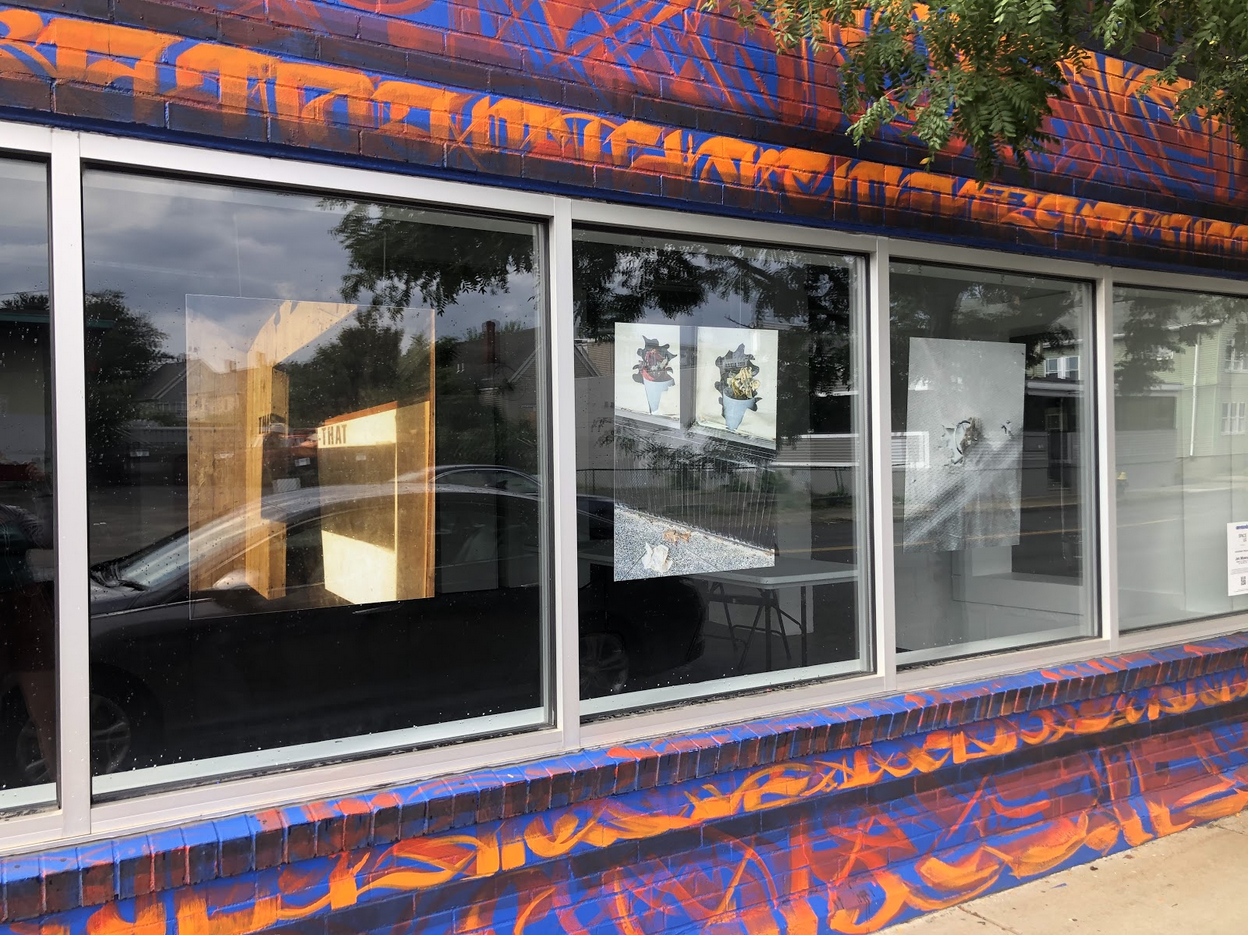 New England has set itself apart in the pandemic. Not only has our beloved region found success in limiting the spread of the Coronavirus (for now at least), many of its residents have also used the pandemic as an opportunity for innovation. One of the best examples of this is David Guerra. Born in Cuba and based in Boston, Guerra has been a mainstay in the Boston art world since founding A R E A Gallery in 2016. This summer, while many of us were binging Netflix and wallowing in self pity, Guerra was hatching something totally new and exciting: AREA CODE art fair. This inaugural art fair is original in two ways: its focus on New England artists (a long-needed unifying platform for the regional art community) and its online/offline dual nature. Other, more established art fairs have taken an all-or-nothing approach: Art Basel was cancelled (although Art Basel Miami stunningly persists this December), Frieze went online, and Untitled Art has even delved into virtual reality. But, like several of the universities in the area, AREA CODE has gone hybrid.

In this respect, AREA CODE is highly experimental. According to Guerra, “We thought about it as a test for what can be done in a future without COVID, but we did not want to wait until then to bring art to our communities and to share the result of the amazing artists who have chosen New England as a home to live and work.” His team therefore treats the pandemic landscape as a testing ground for new ways to experience local, public art in a way that is equitable and free. In fact, unlike most art fairs, all of the work juried by AREA CODE’s curators is free to view and access. The Main Section, featuring 90 artists, is entirely online, as are several performances livestreamed on YouTube (three of which are upcoming). There was even a drive-in screening and light show held on Salem State’s campus on August 14th, therefore bringing a suburban element to a too-often highly urbanized (and therefore exclusive) art fair scene. While I regrettably could not attend this fantastic event, I was not going to miss out on the highly appealing in-person aspects of the fair. Rather, I immersed myself in the Storefront Project, finally able to quench my thirst for an opportunity to see new work in person after many months of half-heartedly viewing a screen.

While I was ready to get out into the city and view the art, my legs, having been largely sedentary since lockdown began, were not. The Storefront Project is expansive, featuring work by 11 artists in the windows of stores, restaurants, and offices across the Greater Boston area. The westernmost storefront in Watertown, featuring Mia Fabrizio (SMFA, MFA ‘20), to the easternmost one at Downtown Crossing, showing Marla McLeod’s (SMFA, MFA ‘20) work, is a 6 mile walk. For comparison, the Freedom Trail is only 2.5 miles. Starting from my home in Allston, I decided to focus on hitting five storefronts from Lower Allston to Kendall Square, which took about an hour and a half from the first stop to the last. The next day I also stopped by a storefront in Coolidge Corner.

Above is the route I took from Allston to Cambridge to see five artists’ work. Thanks MS Paint!

My first stop was Jen Mawson’s (MassArt, MFA ‘20) photographs at Zone 3, a Harvard creative programming initiative in Lower Allston. This location brought me to a part of my neighborhood that I had rarely visited. I was ecstatic to not only see Mawson’s unsettling but attractive photos, matted behind the glass, but to realize that a whole creative complex was just a short stroll away from my doorstep.

Heading across the bridge into Cambridge, I felt as though I was embarking on an alternative art Freedom Trail. Rather than guiding me through history, AREA CODE was leading me to the most contemporary work and destinations, right through the heart of Boston’s creative underground. In fact, the Storefront Project couldn’t be more current – its purpose is to showcase the work of recent MFA graduates from local art schools, especially when many of their thesis shows and other critical opportunities had been cancelled due to the pandemic. It is inspiring that AREA CODE has so diligently worked not only to provide a platform for an oft-overlooked region of the art world, but also to particularly support new artists at such a vulnerable point in their career. 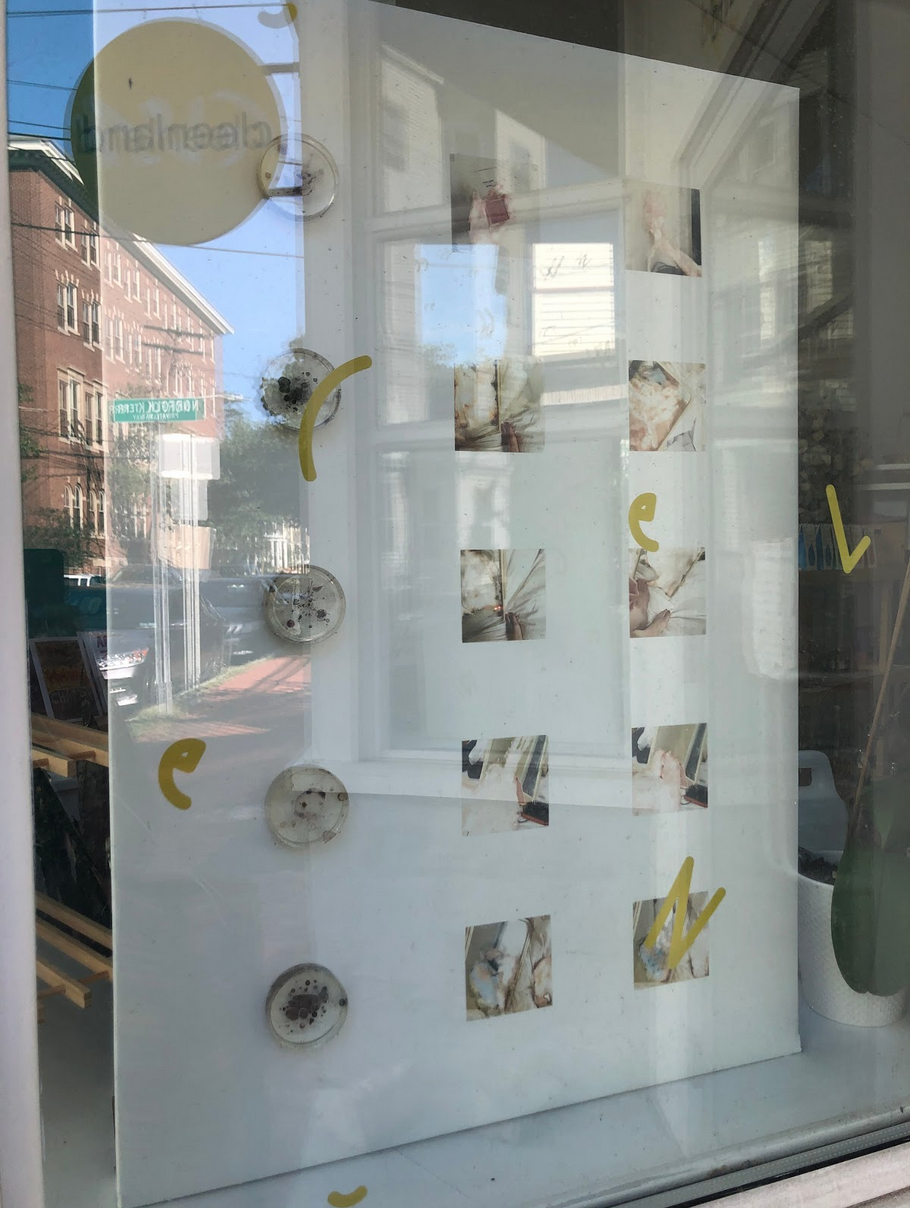 A few blocks away from Central Square is Cleenland, a low-waste homegoods store. This was the second stop on my journey, featuring multimedia work by Ji Yoon Chung (RISD, MFA ‘20) exploring transience, continuity, and liminal space. Her subtle pieces, mounted on white board, begin to embody the themes themselves as they almost disappear into the storefront when not carefully looking. Whether this was purposeful is unclear, but I wish it had not taken so long for me to figure out where the works were, on either side of the door rather than in the front windows. The yellow Cleenland stickers on the window itself also inhibited proper viewing of Chung’s work.

Albeit a natural symptom of working with these alternative, almost makeshift exhibition spaces, sometimes the viewing experience did suffer. I came into a similar problem when searching for Cynthia Zeman’s (MassArt, MFA ‘20) intricate window paintings at PCA Architects in Inman Square. While the address on the AREA CODE website said to go to 221 Hampshire Street, the installation is actually on the other side, on Cambridge Street. I was glad to not have missed after all her humorous and engaging subversions of femininity. 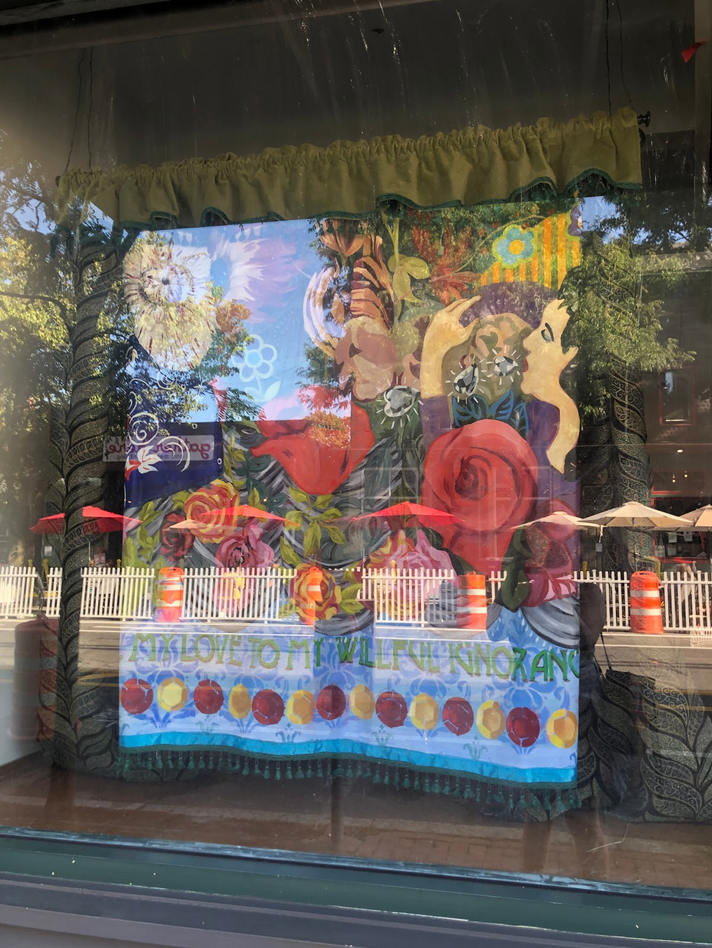 Just across the street are Jessica Lau’s (Lesley, MFA ‘20) sculptures which also invoke a feminine aesthetic. In the window of Gather Here, an exceedingly pretty craft store and sewing studio, it was easily the best installation. Placed in front of a cream-colored curtain, Lau’s sculptures are elevated to a higher status and therefore stand out as public art more than several of the other storefront installations allowed. 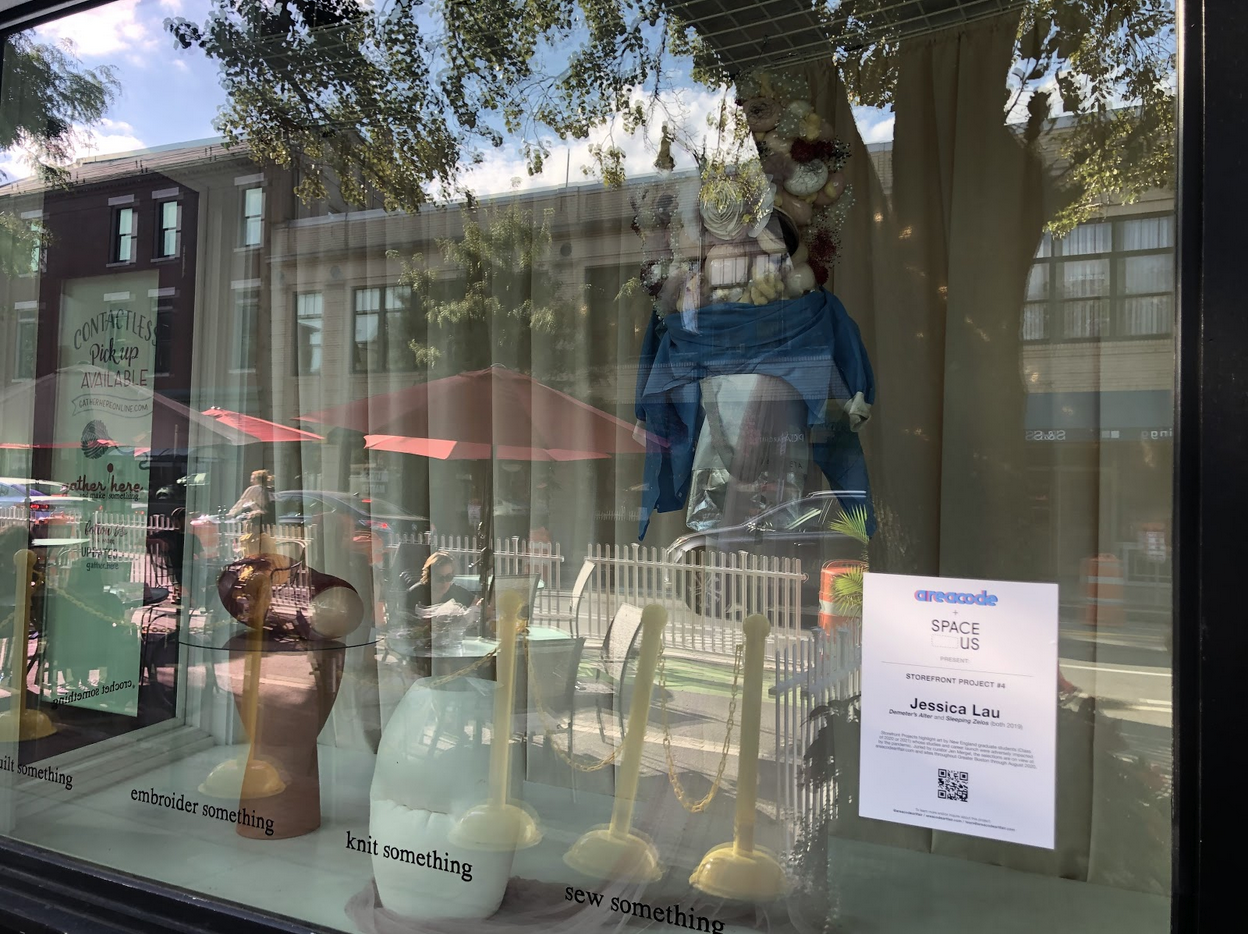 The last stop on my Allston-Cambridge route was Mamaleh’s, a deli restaurant in Kendall Square exhibiting canvases by Madison Vander Ark (BU, MFA ‘20). Her architectural paintings were distinctive, highly naturalistic yet slightly warped–a hungry passerby would be hard pressed not to stop and take a closer look. And yet her fabric work, Elevator to the 4th Floor, was easily missable, mounted behind the Mamaleh’s logo. Unfortunately, it wasn’t until I looked back at the AREA CODE website later on that I realized this was part of her exhibition. A day later, I also made a quick trip to Coolidge Corner to see Nathan Heilman’s (MassArt, MFA ‘20) painting hafvilla : co p p er fl avor ed co ffe in the window of When Pigs Fly bakery. Another highlight of the fair, Heilman’s work is totally arresting. At a substantial 60 x 48 in., it takes up a large portion of the window, and is striking against the black background of the storefront. This deeply textural work epitomizes why it is so crucial that AREA CODE found a way to show art in person – online images just don’t do most works justice. 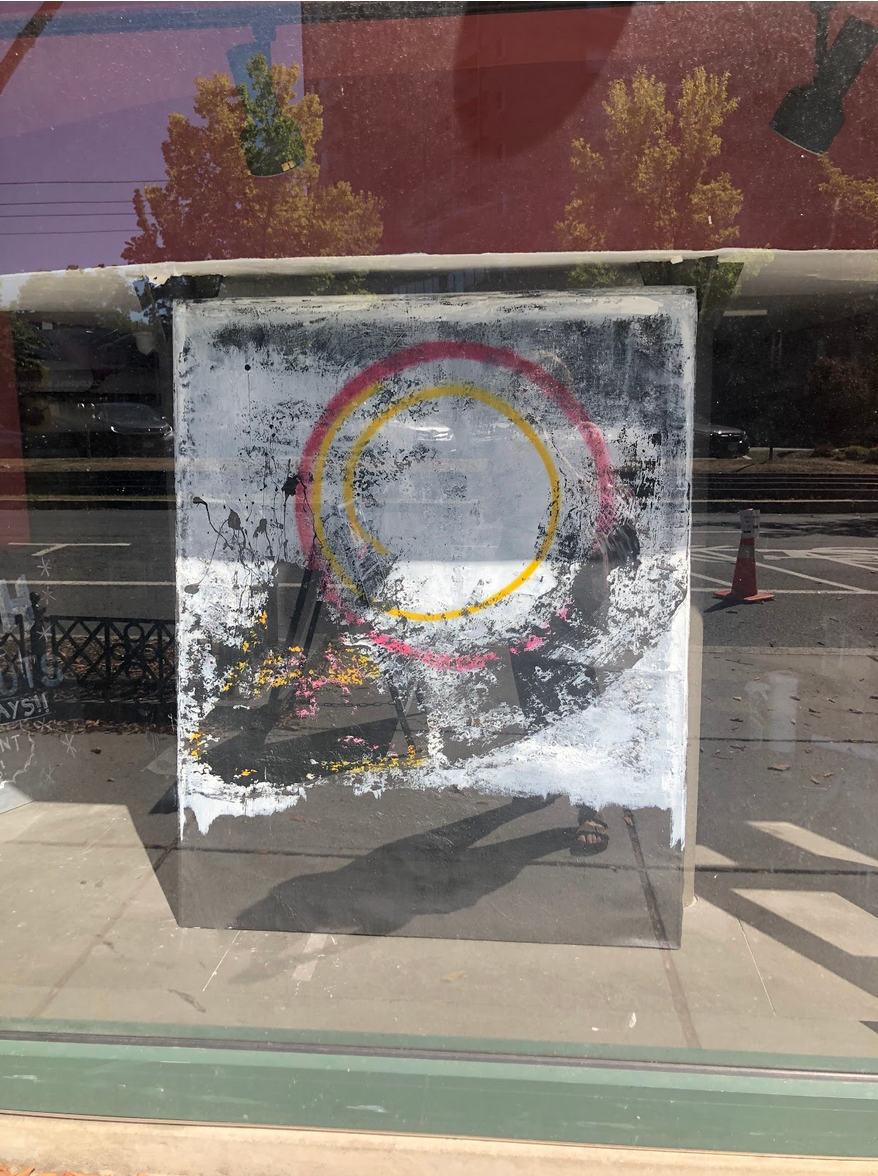 Although a few of the installations left a little to be desired, AREA CODE Art Fair should be viewed as a game-changer for the New England art scene as well as the blueprint for art fairs in the time of COVID. Its hybrid nature easily allows for safe, socially distanced viewing while also adding an opportunity to discover something new beyond a screen. I learned about exciting new local artists as I also explored different neighborhoods. I stumbled upon new spots along the way, such as the enticing Inman Square Irish pub, The Druid, just across from Zeman’s exhibition, the hidden gem Kantipur Cafe, where I refreshed with a very tasty and very cheap mango lassi, and even the hosting storefronts themselves!

The above images of the storefront exhibitions were taken by the author on her visit. For clearer images of the artwork and to learn more about the AREA CODE Storefront Project, please go to https://www.areacodeartfair.com/storefrontproject.

AREA CODE Art Fair is visible online and in person in various locations around the Greater Boston area until August 31st.