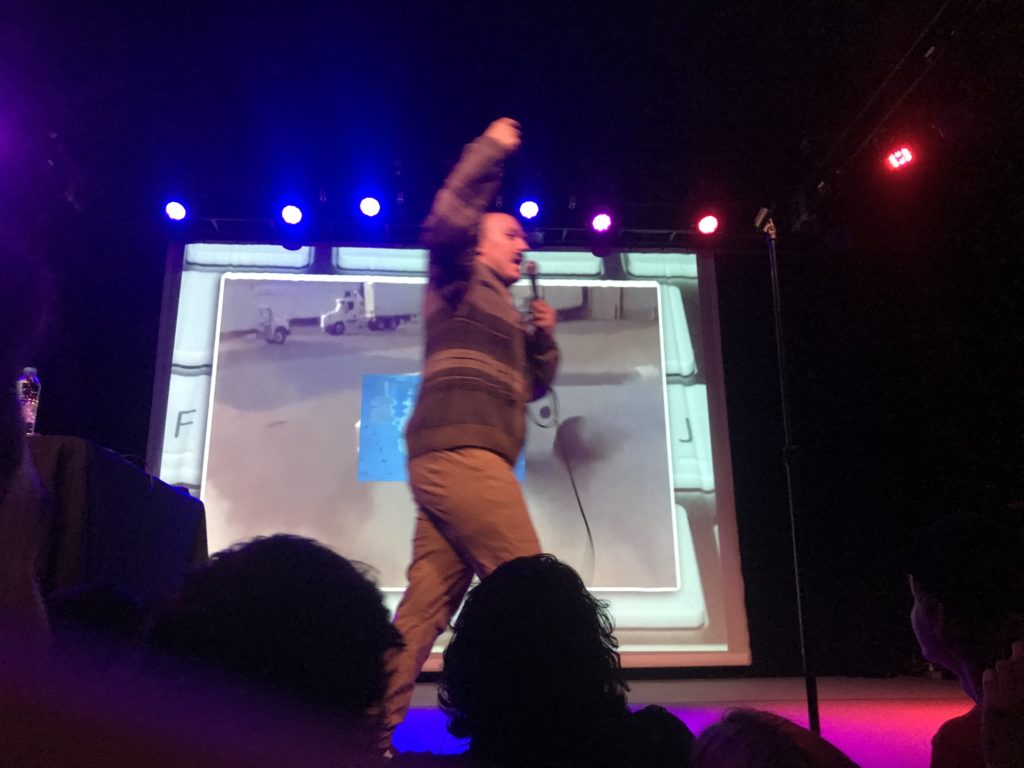 Anthony Fantano isn’t someone you ever expect to see in real life. The YouTube personality and music reviewer’s public persona is so engulfed in memes and internet culture that live shows seem like a bit of an unlikely side hustle.

But however unlikely the show seemed, the Fantano live show at the Sinclair was a charming night of musical discussion, argument, and what I suppose could be called live-action memes. It was a perfect balance of callbacks and references to fan-favorite or infamous moments on the channel and new musical discussion.

Of course, Cal Chu Chesta, Fantano’s parody-rapping alter ego made an appearance. Since the comedy behind the Cal Chu Chesta character could only really originate online, seeing him live on stage was the nights weirder moments. It’s the kind of humor you could only really get if you were already in on the joke online. Luckily everyone in the crowd seemed to be a fan already so the absurdity of the bit was well enjoyed.

Fantano’s tongue and cheek analysis of Smash Mouth’s “All-Star” and his sarcastic praise of the revolutionary listening experience and YouTube sensation that is 8D audio were similarly absurd.

As the show went on, Fantano shifted personas and left behind total absurdity for entertaining but thoughtful discussion.

The live session of the popular “Let’s Argue” segment was a particularly special part of the night. People in the audience were invited to say their “Hot Takes, Unpopular Opinions, and Tough Questions” into the mic and Anthony would respond.

The diversity of opinion and readiness to deliver hot takes really contradicted the common perception of Fantano fans as a monolith that simply copy his opinions. And even with hot take after hot take, the atmosphere in the room stayed friendly and light hearted. It was genuinely uplifting that so many people were given a chance to say essentially whatever they wanted into the mic and the conversation never drifted into rocky or insensitive territory.

Some of the takes were less serious than others of course, but what made the segment special was simply the fact that fans finally had a chance to say anything to a guy they might have listened to on YouTube for years.

After the show I was lucky enough to catch Fantano for a quick interview. We talked about his relationship with his fans, DIY music scenes and a hypothetical 8D Fantano live show.

Boston Hassle: On your Instagram story you have music, memes, progressive politics, and now dating advice. Did you ever see your relationship with your fans becoming what is it now?

Anthony Fantano: Yes and no. I mean, for whatever reason there are people every once in a while, that will ask me really personal questions and I won’t know why they think I am an authority on this [laughs]. And recently on Instagram I just answered one fans dating question and all of a sudden, they just all started rolling in.

I’m not entirely surprised. I feel like there are a lot of young people who struggle with meeting each other and making personal connections in the information age. Maybe it’s because of social media or technology but I also think there are a lot of systematic and economic factors that could go into that struggle as well.

I think people are just trying to find a personal solution to a systemic problem. And there are ways to work around it personally but… yeah, I think that’s all I have to say.

BH:What would be your ideal DIY scene?

AF: I don’t think there is such a thing as an ideal scene. I mean, as long as people are actually doing it themselves and are collaborating and collectivizing, I think that’s really all that matters. I think as long as their accomplishing their artistic goals and making what they want to make and doing it on their own terms I think that’s what’s most important.

BH: What would an 8D Anthony Fantano live show look like?

AF: Speakers in every direction. Also, a limited amount of people because the speakers would have to be really close.

BH: Ah, you could only experience it from one angle.

AF: Exactly, you would have to be at a specific angle with speakers all around you.