Analog | Digital marks the 2019 annual Juried Show at Beacon Gallery (SoWa district, 524 Harrison Ave), featuring artists from every corner of the country working in a refreshing mix of “old” and new media. The show explores our transition from the analog to digital age, both collectively and personally: how it has affected art-making, art’s value and purpose, and our everyday lives– what we think about, what we look forward to, and what we sometimes fear. What has been lost, and what has been found in this transition? And in the declaration of the “obsolete,” which values and practices have timelessly prevailed? 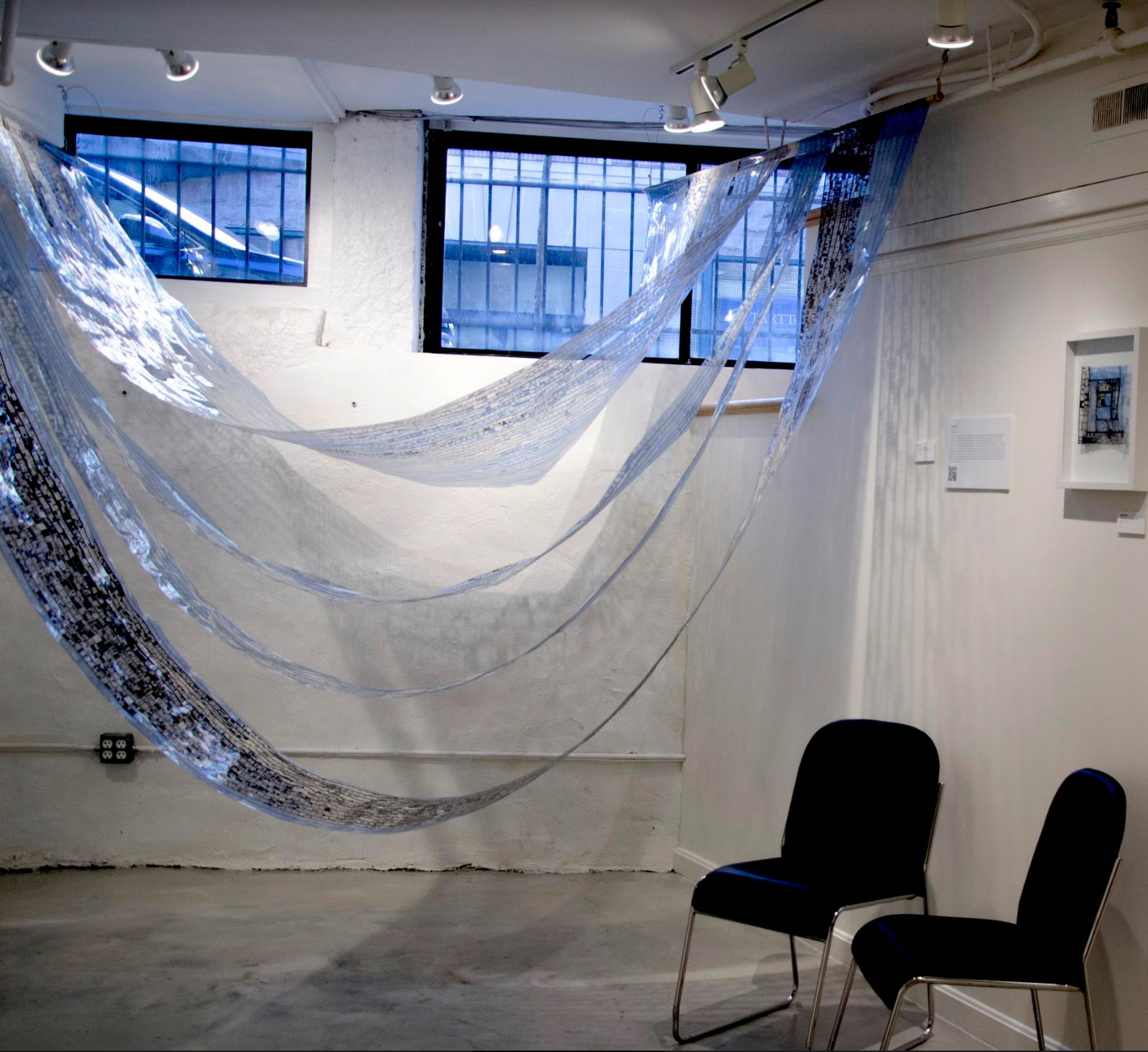 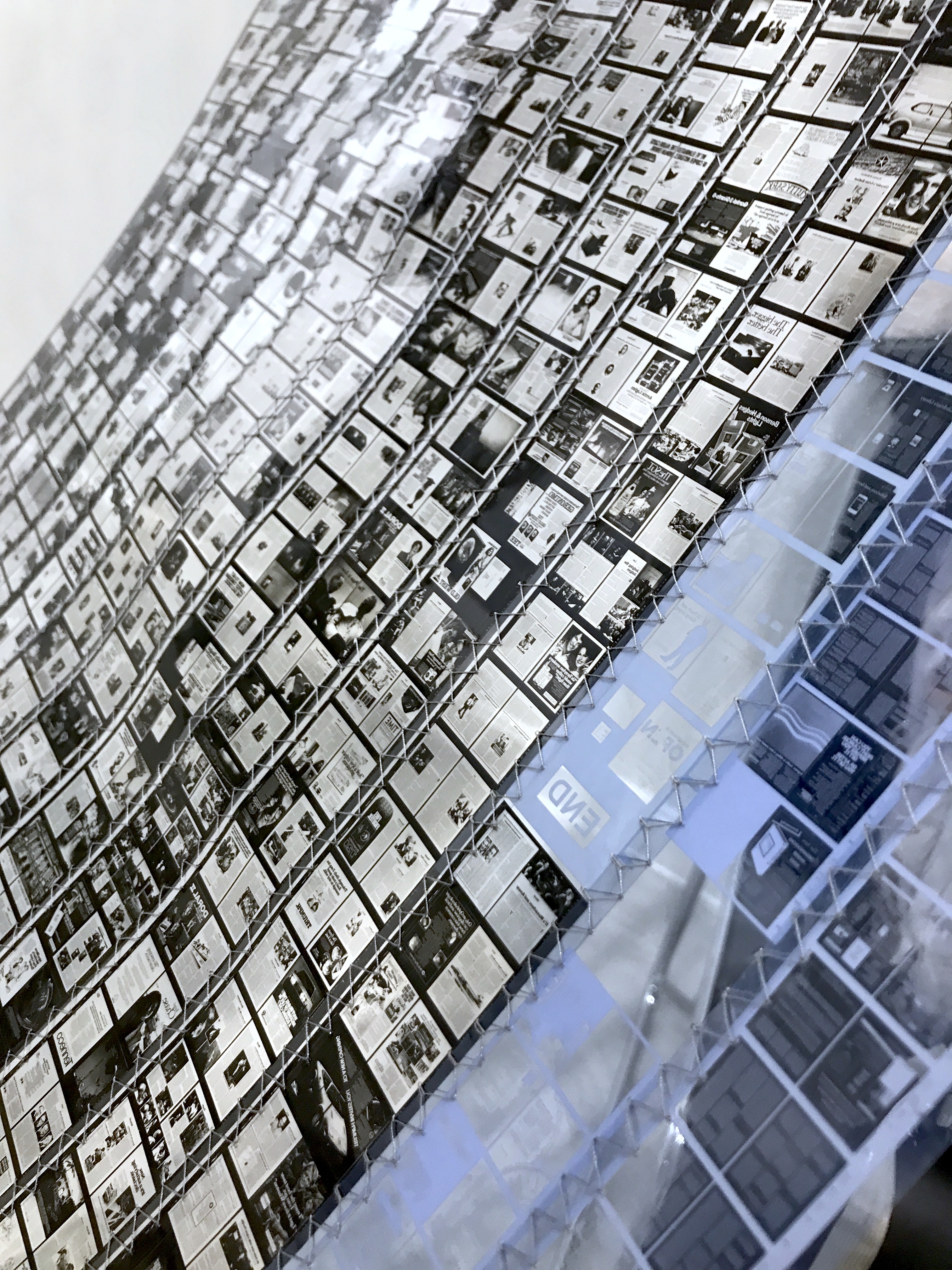 Lydia See, An Apocryphal Cloud of Somewheres and Sometimes, 2018

Lydia See’s mixed-media installation, An Apocryphal Cloud of Somewheres and Sometimes, received First Place in Beacon’s juried competition. It was also the very first piece I noticed upon entering the gallery, engrossing me with its impressive scale, dazzling translucency, and the intricate shadows it casts on its surroundings. I found myself squinting at its tiny, microfilm images, trying to discern exactly what this one, itty-bitty page from a defunct magazine was once trying to tell its reader. But removed from its original context, shrunk to “insignificant” size, and incorporated into the infinite pattern that is See’s “Cloud,” this image’s purpose becomes purely visual and contemplative. Its individuality is undermined by the “Cloud”‘s collective mass of information, which is made overwhelmingly inaccessible to the viewer. Yet each microfilm segment and its content are meticulously preserved via the artist’s “archival” process: each strip is painstakingly stitched together with fine thread in a uniform pattern, counteracting its fragility both materially and temporally. An Apocryphal Cloud acts as an analog visualization of the transmission of information in our digital age across space and time. It speaks to the constant impulse and unfortunate necessity to both feed and discard the bombardment of information we face every day in our contemporary, all-access age. Despite its visual splendor, See’s piece appears to interpret this age as more of a curse than a blessing. 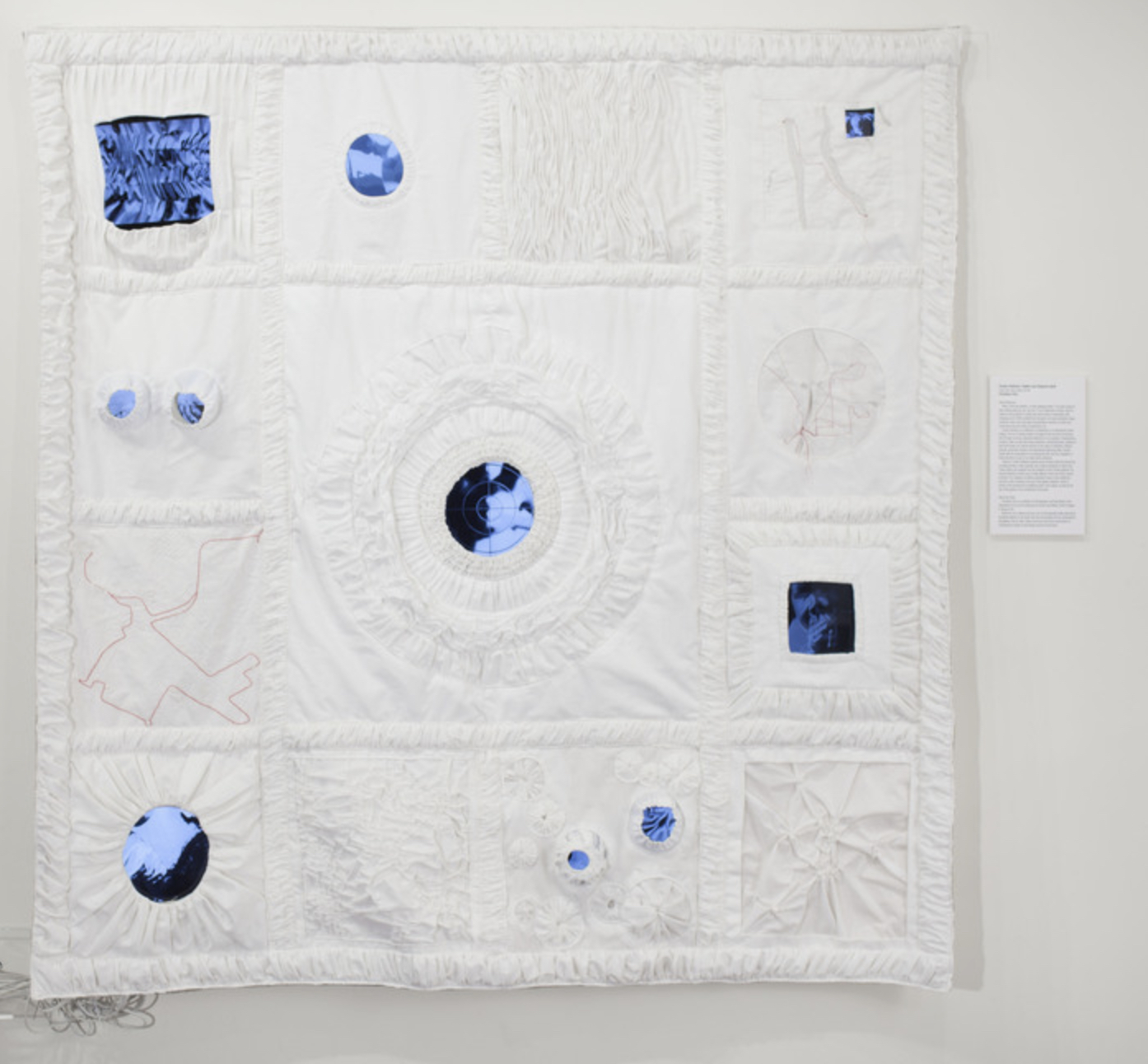 The highlight of my visit to Analog|Digital was experiencing Christine Chin’s Hunter Gatherer: Gather and Disperse Quilt. As a large-scale fibers and video installation, one immediately feels the analog/digital clash (see the work in action here). Harkening to as far back as the Paleolithic age (about as analog as it gets), Hunter Gatherer addresses the woman’s “predestined” role in society as it was originally defined by her biology: both as mother (this being the piece’s focus), and as sexual object. At the piece’s center, circular quilt forms draw the viewer into a small video screen overlaid with a target symbol, in which a woman steps in-and-out of frame and squirts her breast milk at the camera (viewer). Perhaps this act is the artist’s means of confronting the sexualization of woman bodies and the assumptions surrounding the societal construct of “femininity;” both in the context of the art world (notions of “feminine” art and how women have been depicted in art throughout history), as well as in age-old female stereotypes. In response, the artist militarizes her own body via its most nurturing capacity (breast-feeding). One detail I really appreciate about Hunter Gatherer is it’s non-reliance on vaginal forms or imagery; such forms have practically defined an entire genre of “feminist” art that is both too mainstream and too self-objectifying to be noteworthy anymore (i.e., I am more than my vagina…). But maybe I’m reading too far into this and the artist’s omittance is only because the piece doesn’t deal explicitly with vaginal birth. Rather, it explores the prolonged experience of motherhood, in all its joys and anxieties, and how the analog-to-digital transition has influenced the practice of parenting.

The 3D forms in Hunter Gatherer are refreshingly abstract, although unquestionably “womby,” delightfully fleshy and rippling with a sense of life. Many of these forms appropriately resemble what we might imagine a post-birth, “shrunken” womb to look like, creating a sense of airy-hollowness that lurks about the piece. The medium of quilting has inseparable ties to family and tradition, being a handmade material, historically used to tell stories and store memories, and often passed down through a family’s generations– thus, participating in exclusively-analog and irreplaceable human rituals. Contrastingly, the piece uses technological devices (iPads and iPhones) to display it’s video components. In light of modern parenting, this detail immediately struck me; too often do I see a child handed an electronic device instead of being engaged by their parent.

Chin’s video elements also possess qualities akin to surveillance footage (black & white, posterized and grainy effects, sped-up and still footage). This imagery calls upon the digital resources we have at our disposal nowadays for maximizing the protection of our children; baby monitors, parental controls, and apps like “Find My Friends” to keep track of your loved one’s whereabouts. Embodied in Hunter Gatherer is the profound stress (and joy) of being a parent in our contemporary world, including the notion of knowing when to step in and step off; what should we and shouldn’t we be protecting our kids from? Which situations should we let them face by themselves, and when is it the right time? The lower-left video in the work appears to address these timeless questions: filmed lingering behind two children driving a toy car, it appears to portray a child navigating the flailing path to maturation and a parent’s desire to be there to guide them every step of the way. The upper-right video charts an action as familiar as securing a child in a car seat, tenderly embodying a parent’s innate urge to nurture and protect. These urges are two intensely-human traits and responsibilities, ones which we will never be able to digitally replicate or substitute. 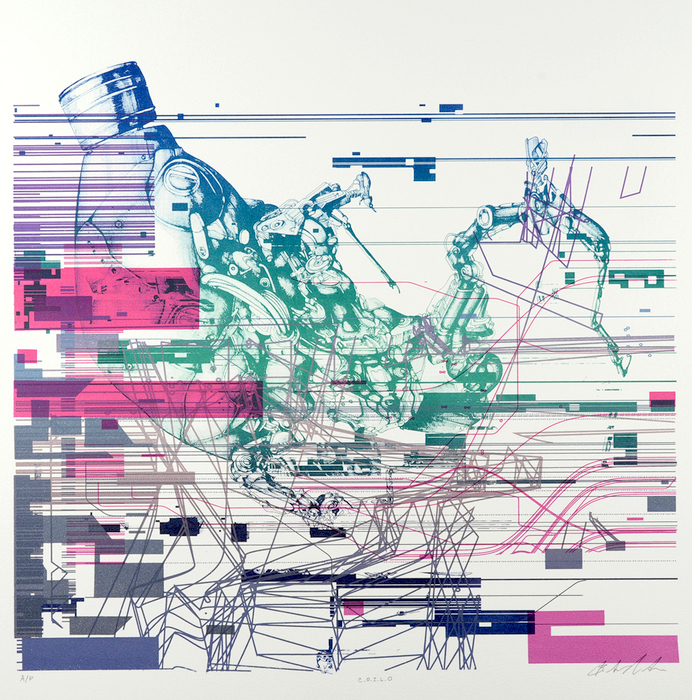 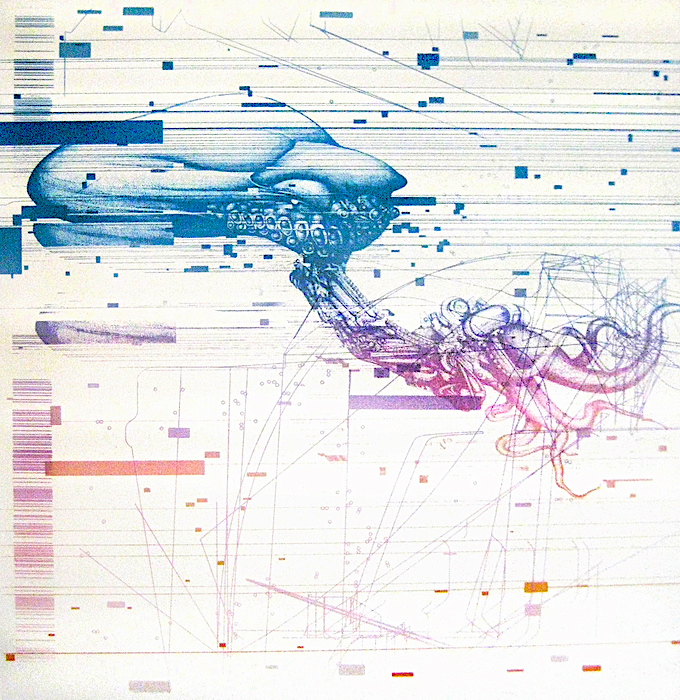 Andrew Au’s mesmerizing lithograph-silkscreen prints, COILO and COI-7, explore a universal, human curiosity, no different from analog times than in our digital age: the pursuit of contact with extraterrestrial life. The prints’ imagery is partially inspired by the first radio transmissions that were sent into space for this purpose. Au specifically references the Arecibo Message, which was sent only once in 1974 to “globular star cluster M13,” carrying basic information about humanity and earth in hopes of being received and deciphered by intelligent life. Particularly in COI-7, Au’s methodical linework, mapping of points and levels, and “connecting the dots,” illustrate a foreign, almost mathematical language, one which we can only interpret as random chaos since these measurements or messages defy our kind of logic– the question becomes, what defines their logic? My impression was that I am witnessing an untranslatable transcript of an alien language, demonstrating the timeless (and perhaps necessary) barrier between us and them which prevails even in our most technologically-advanced age. There is a profound effect to be seen in both of Au’s prints: the lines in a formerly 2D plane begin to erect 3D structures, transforming their formalistic, algorithmic foundations into depictions of perplexing creatures. They look similar to living beings on earth (a fish and an octopus) but are distorted by their robotic build and additional appendages. Au draws these creatures freehand, scans these drawings, then modifies them again and again both digitally and by hand (cutting and pasting, printing and re-printing). This process produces conflated imagery referential to both old polygraphs and modern barcodes, defying a temporal destination and creating its own, “alien” sense of time and space.

Beacon Gallery’s Analog|Digital is not only a must-see exhibition but a fantastic site to procure the most unique and current artwork in the Boston area (what’s more, many pieces fall into the affordable $150-$350 range). I was fortunate enough to engage in a dialogue with the wonderful Christine O’Donnell; Beacon Gallery’s owner, show juror (1 out of 3), and lead curator; about her massive passion for supporting artists and activating art spaces. In her personal curatorial vision, “content is king.” She values art with a relevant message that really makes you think, and not necessarily for the sake of wall decoration or “blue-chip investments,” which is what I think sets O’Donnell’s space apart from your typical gallery’s philosophy. Her buyers are true patrons of the arts: “in it” for the visceral experience of a work and to promote the talent behind it. I appreciate how Analog|Digital displays both emerging and established artists on an equal playing field, a result of the show’s “blind” acceptance policy: CV’s, resumes, etc. were not a factor of consideration, only the quality of an artist’s work. The artists’ own statements accompany their artworks rather than artificial wall text and feature scannable QR codes that bring you directly to the artists’ website. That’s one good thing for art and artists in this digital age of ours: it’s never been easier to put your work out there. Art and our understanding of it may be constantly evolving, but the value of its makers will never diminish.