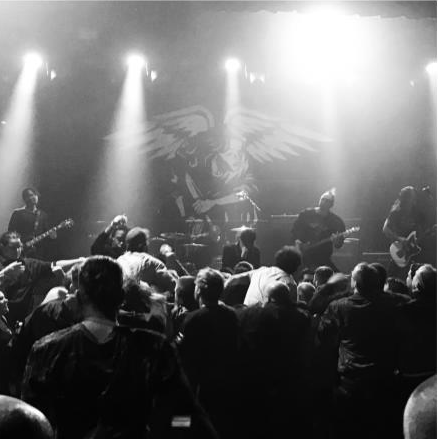 Rohnert Park’s Ceremony took the stage at Royale on Thursday night to a packed house, delivering an eclectic and intense stew of songs spanning a fifteen-year career. Blending synth-inflected post-punk tracks from their August 2019 release In The Spirit World Now with a killer selection of ripping hardcore-punk tunes from seven different albums and EPs, the band blazed through its set with moody precision and unavoidable gravitas. Fueled equally by the sneering goth energy of Anthony Anzaldo’s guitar and keytar riffs and frontman Ross Farrar’s brilliant channeling of The Suicide File’s Dave Weinberg and Joy Division’s Ian Curtis, Ceremony churned out a diverse and compelling mixture of tracks, ending with the thrashing suite of “Sick,” “He-god-Has Favored Our Undertakings,” and “Kersed.”

American Nightmare then stormed the stage against the draped backdrop of Linas Garsys’ classic angel logo synonymous with the band’s looming outsider legacy, kicking off a cross country tour in celebration of the band’s twentieth anniversary with its doomed anthem “Love American.” The crowd surged forward to sing along to the star-crossed poetry of Wesley Eisold, who commanded the stage with refreshed vigor:

You go nowhere in a nowhere town
We’re growing up by falling down
We love the songs because we live the songs
In condemned flats between the rights and wrongs.

Carving out a brooding tapestry of canonical Boston hardcore songs including “AM/PM,” “Hearts,” and “There’s a Black Hole in the Shadow of the Pru,” intermittent, ripping cuts both old and new such as “I Saved Latin” and “Dream,” and carefully selected, perfectly on-brand covers “Dead and Gone” (The Trouble) and “You and Me” (Archers of Loaf), the band’s live sequence struck to the core of its authentic ethos of melancholy, refusing to retreat from its signature overflow of powerful emotion. The biggest surprise of the night was “Life Support.” On this track the band embraces its punk roots sonically and spiritually with newfound commitment and visceral, electric doom:

A straight-ahead rocker shifting the band’s position towards a ripping punk future rather than to a recursive victory lap, on “Life Support” the band appears ready to transcend the barriers of its grime punk, pop, ‘80s punk, and post-punk influences, capturing a sound that is true to itself while at the same time bringing to mind The Bronx, Black Flag (who American Nightmare has famously covered with “Depression”), and the melodious ferocity and kinetic experiment of punk titans Fucked Up. No doubt, the ominous light to the band’s east is a shade of a different color and fans look forward to hearing where we might end up next, myself included.