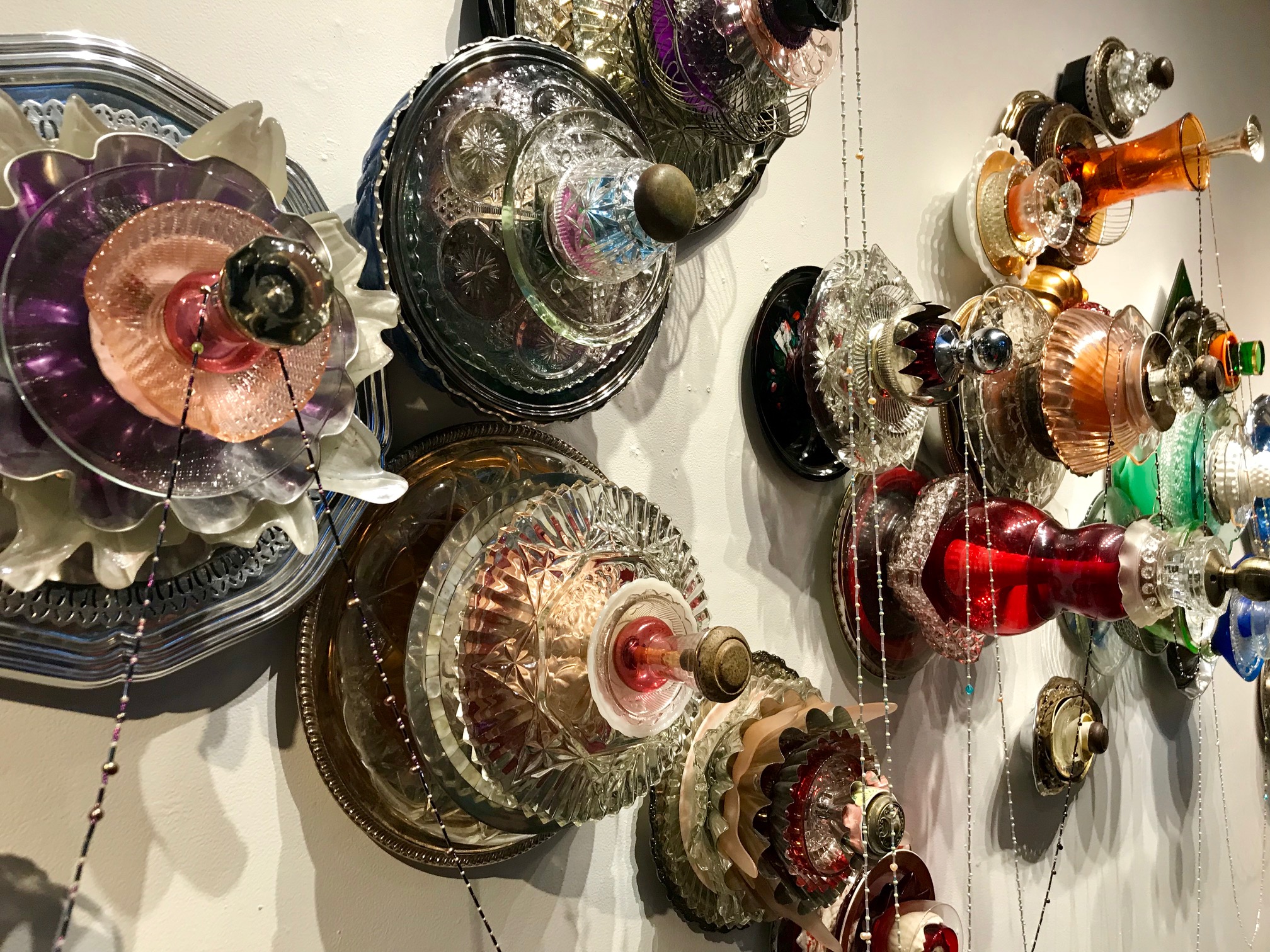 Tucked in a residential area on the border of Brookline and the Fenway area, sits a quaint, brick building in a park with a playground, home to the Brookline Arts Center. Approaching the building from the park, visitors are greeted with stage-like windows of the gallery presenting shiny and glistening objects resembling eyes returning the gaze they are being given. These eyes are pieces of “found” objects assembled by David Bermingham, featured artist of the Echo Trobridge Artist Residency. 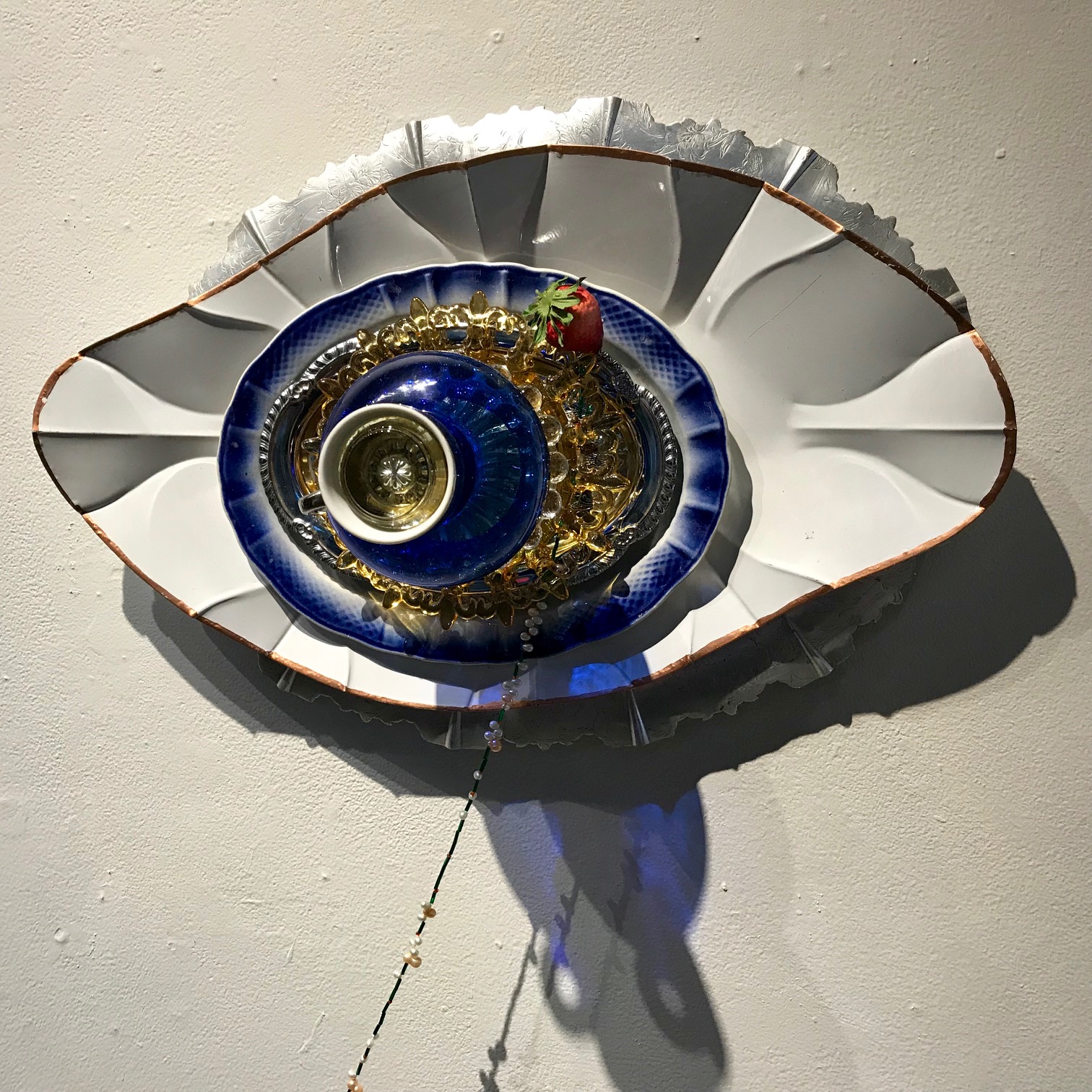 The residency was named in honor of BAC’s first artist-in-residence, Echo Trobridge, a ceramicist and teacher, who used her time at BAC to work on her craft, share her knowledge, and learn from others. It is open to all artists residing in the US and gives five weeks of artistic development and three weeks for a public exhibition in their unique gallery space. The next call for proposals will be open January 4 with an April 1 deadline. 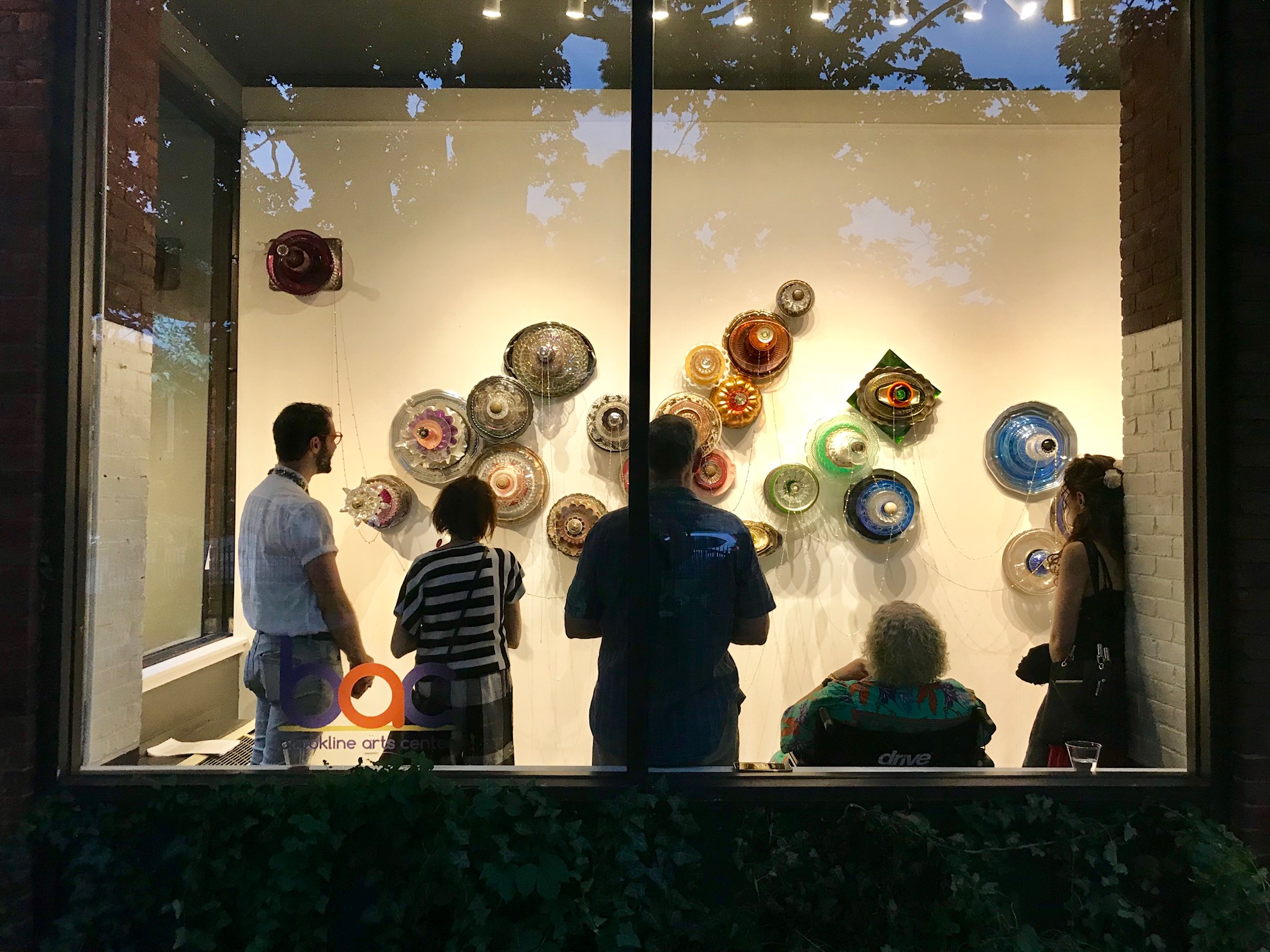 Bermingham used his time at BAC to create a site-specific installation based on his Occhi sculptures. Each one of Bermingham’s pieces is assembled from an array of dinnerware and other household items he found in second hand stores and yard sales. These pieces physically project from the wall but at a distance look like eyes, resembling Sicilian amulets used by the artist’s grandmother to ward off superstitious maladies when he was younger. 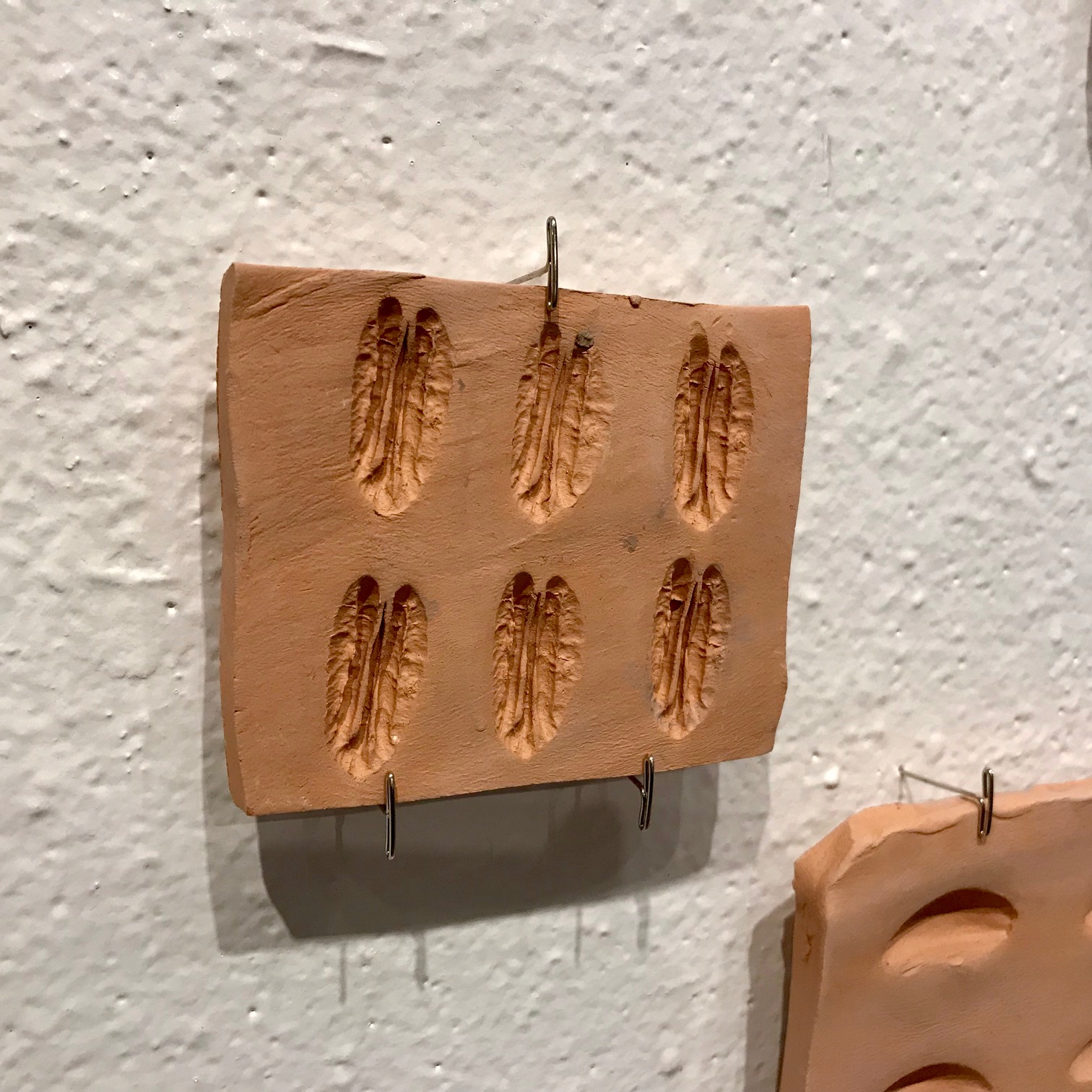 In the corner of the main gallery is another sculpture, Cant Slang. Visually, it is a simple looking object; it is a string of clay nuts made from molds with bits of torn clothing tied to it. However, it is inconspicuously clever! Each bead acts as a functional design element representing a dash or dot, forming words in Morse Code. Deciphering the code reveals a poem the artist wrote describing a postcoital scene. 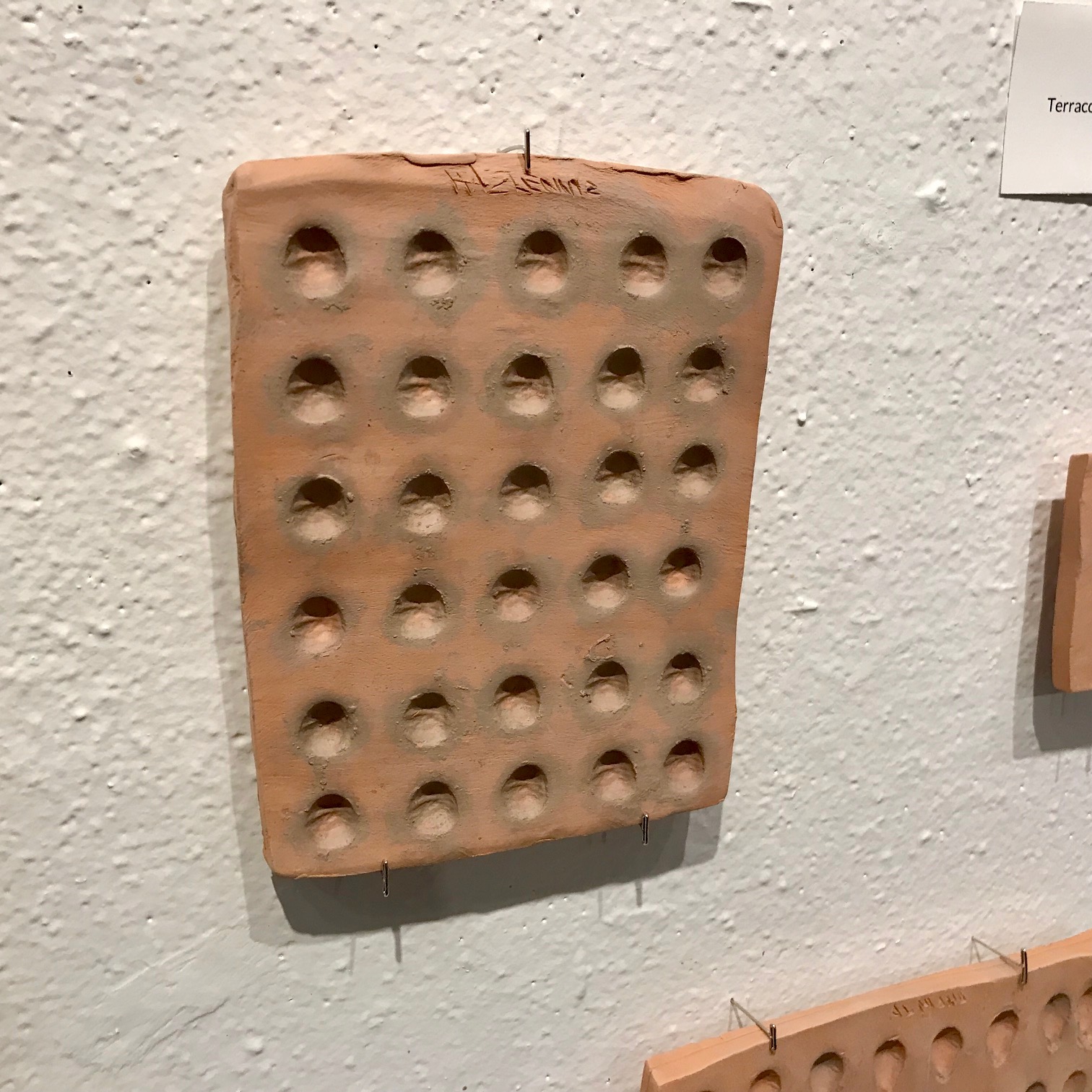 The piece itself is inspired by Polari, a mid-20th Century slang for groups, such as sailors, circus folk, and homosexuals, to avoid or subvert legal and societal norms.

Bermingham says he uses the secret language as “a time machine and a transferal of power” so he can bridge a gap between time, class, and sexuality, especially in a climate of upheaval and social change.

Dave Bermingham’s work will be on view through September 21 at the Brookline Arts Center (86 Monmouth St., Brookline).

About the author: Joe Kitsch is a local artist with an interest in meeting other artists, putting shows together, and letting people know what’s up on the Greater Boston area art scene in order to make this a more interesting place. You can view his work or get in contact with him through his website JoeKitsch.com