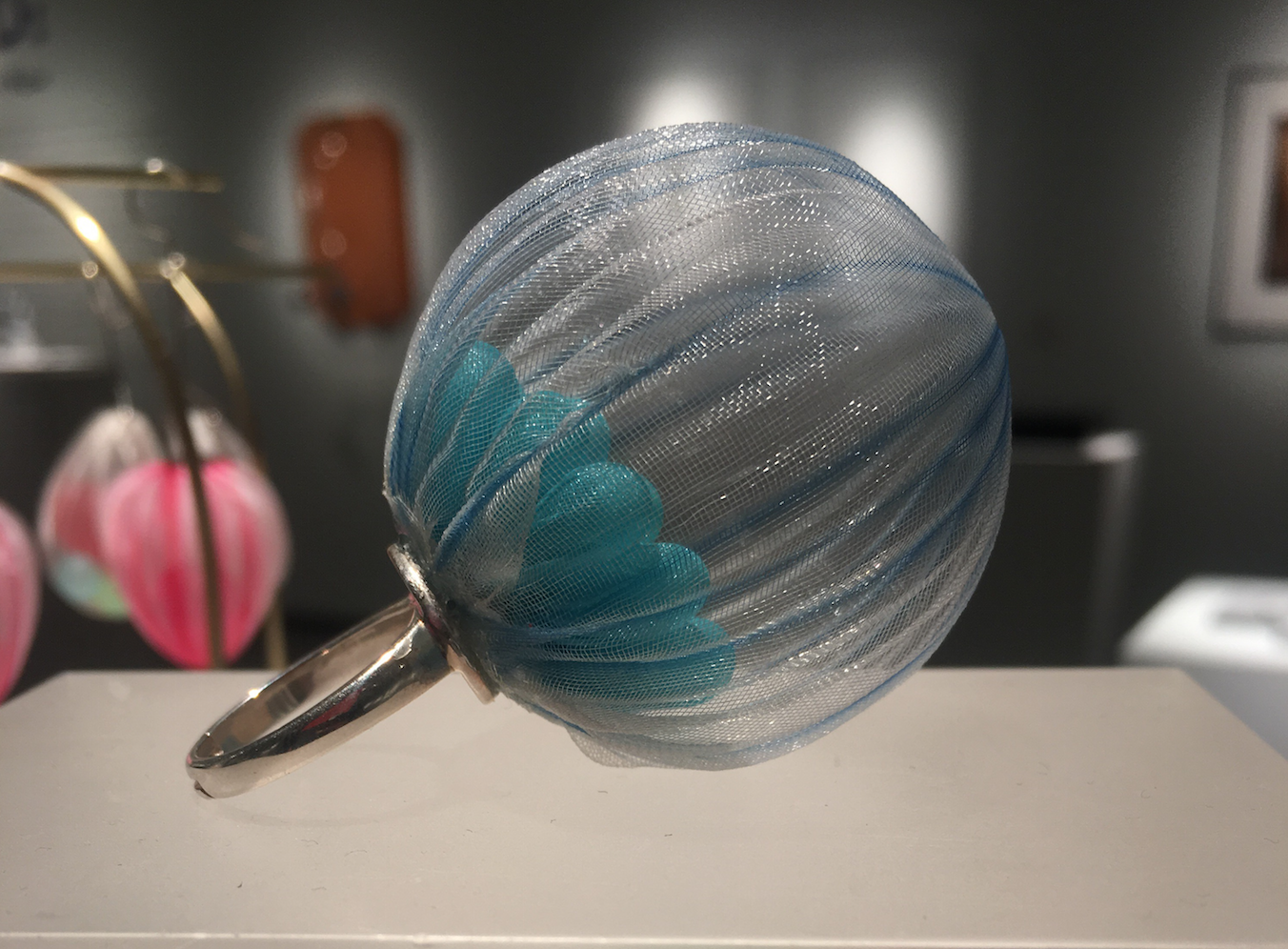 In recent years, I’ve garnered a major fondness for jewelry.

More so, specifically, “costume” jewelry. As with how I am with style and fashion; with jewelry, my penchant for the unconventional in material, color, texture, shape, and oddball nods to popular culture forever reel me in.

I regularly find such pieces commissioned by indie artists and labels online; flea markets and local bazaars; and novelty stores like the sorely missed Patricia Field that once stood on New York City’s Bowery until 2015. (Jezebel expressed my sentiment, of the shuttering, the best: “Patricia Field Is Closing Her New York Storefront & I Don’t Think I Can Go On”).

If I had to guess, it was at Field’s that I was introduced to more fun and outlandish ways to adorn my décolletage, hands, and ears.

My first jewelry purchase there was a lone black leather glove, decorated with a four-headed skull in the middle, flat studs, chains, and a circular steel charm for the middle finger to go through. I remember paying about $25 for it, and it might’ve been an in-house design. There was no label or brand tag attached.

It wasn’t the most outrageous thing I could’ve accessorized myself with. But the purchase meant something to me as a late teen ready to express herself without reservation. Then, I had begun to desire items and labels that reflected my sense of sartorial liberation. At a store like Field’s, I had found my apparel and jewelry people right.
I haven’t looked back since, and because of that, I’ve continued to collect admiration and quizzical admiration from peers, co-workers, and strangers for my choices in jewelry. Let’s just say that hoop earrings the size of a small Tupperware lid continue to hilariously intimidate!

Earlier this February, and as I wore one of those oversized hoops, I visited The Society of Arts and Crafts to observe Adorning Boston and Beyond: Contemporary Studio Jewelry Then + Now.

Overall, including the few restrained, or easily wearable pieces, Adorning Boston was a grand and kooky reminder that just about anything can be made into jewelry, while the exhibit additionally carried a hyperlocal context.

That aspect was presented in homage to the studio artists, past and present, based in the Northeast or with Bostonian ties. Shown on the opposite side of the requisite introductory letter, signed by Adorning Boston curator Heather White, was a wall with eight photographs lined up, each spotlighting a jewelry item or styling, and underneath those, a slightly smaller picture of the name of the creator, such as Art Smith.

The Cuban-born, of Jamaican descent, NYC-raised artist faced discrimination because he was of color and an out homosexual. He persevered, and his Art Deco shapes and surrealistically detailed designs were worn by the luminous likes of Duke Ellington, Lena Horne, and First Lady Eleanor Roosevelt. Today, he is highly favored and respected as a modernist jewelry pioneer. (The Society was honored to host him, posthumously).

Throughout Adorning Boston, jewelry was displayed on counters, encased in glass, or hung from the ceiling or a wall. A lot of the pieces were conspicuously innovative, hence, Donna D’Aquino‘s convoluted, wired and hefty bracelets that were featured in VOGUE Italia.

Notwithstanding, great sincerity and earnestness emanated from each and every piece presented. It was as if the creators were fully aware that not everyone was going to like their work or accept their work as jewelry.

What likely empowered them was that they still believed in the sui generis beauty of their visions and by their last stitch, coating, or gem, visions had rendered as statement jewelry pieces for you and I (jewelry talk for: over the top and bold).

Here are some of the items in Adorning Boston that jumped out at me the most. 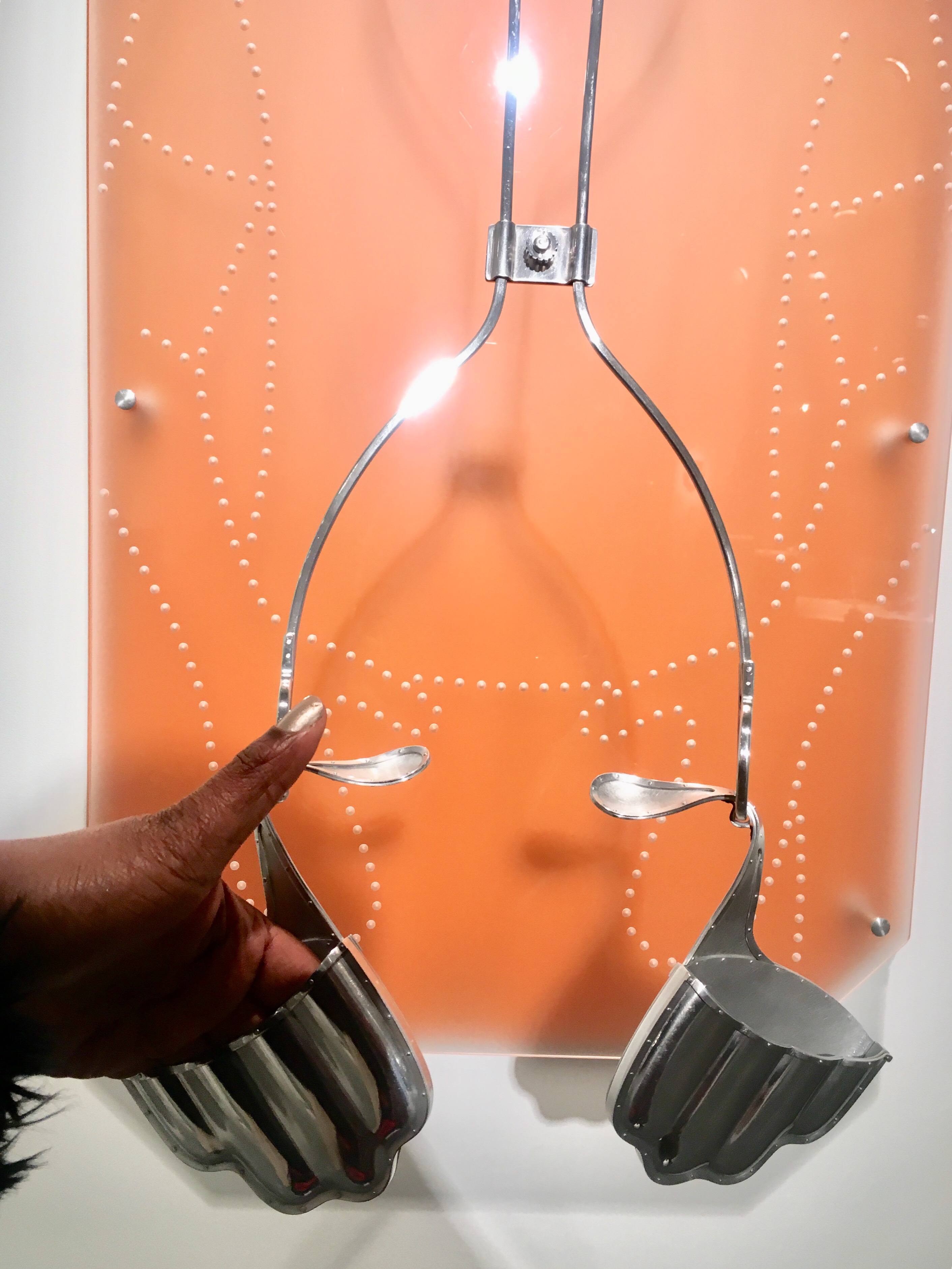 Unguarded Gestures, #1, created fifteen years ago in 2004 by Jennifer Crupi, is a bizarre apparatus that challenged the idea of what and isn’t jewelry for the average Adorning viewer. It’s neither pretty nor a standard shape. It’s cumbersome.

The name of Crupi’s piece made me think of it as a code for protection or self-defense armor (like a chastity belt) but only insofar as it renders its wearer somewhat immobile. Furthermore, I had to be mindful that is was an unguarded gesture, which elicits an invitation to engage and observe, but on the wearer’s terms of course.

Based on the dotted white figure displayed behind it, the piece is presumably meant to be placed over the body. Protruding from the piece are half-mitten molds for hands to rest in.

On Crupi’s website, she shared that her series Guarded and Unguarded Gestures were aluminum created “prosthetic-like neckpieces that encourage the wearer to perform varying degrees of open or assertive gestures.” 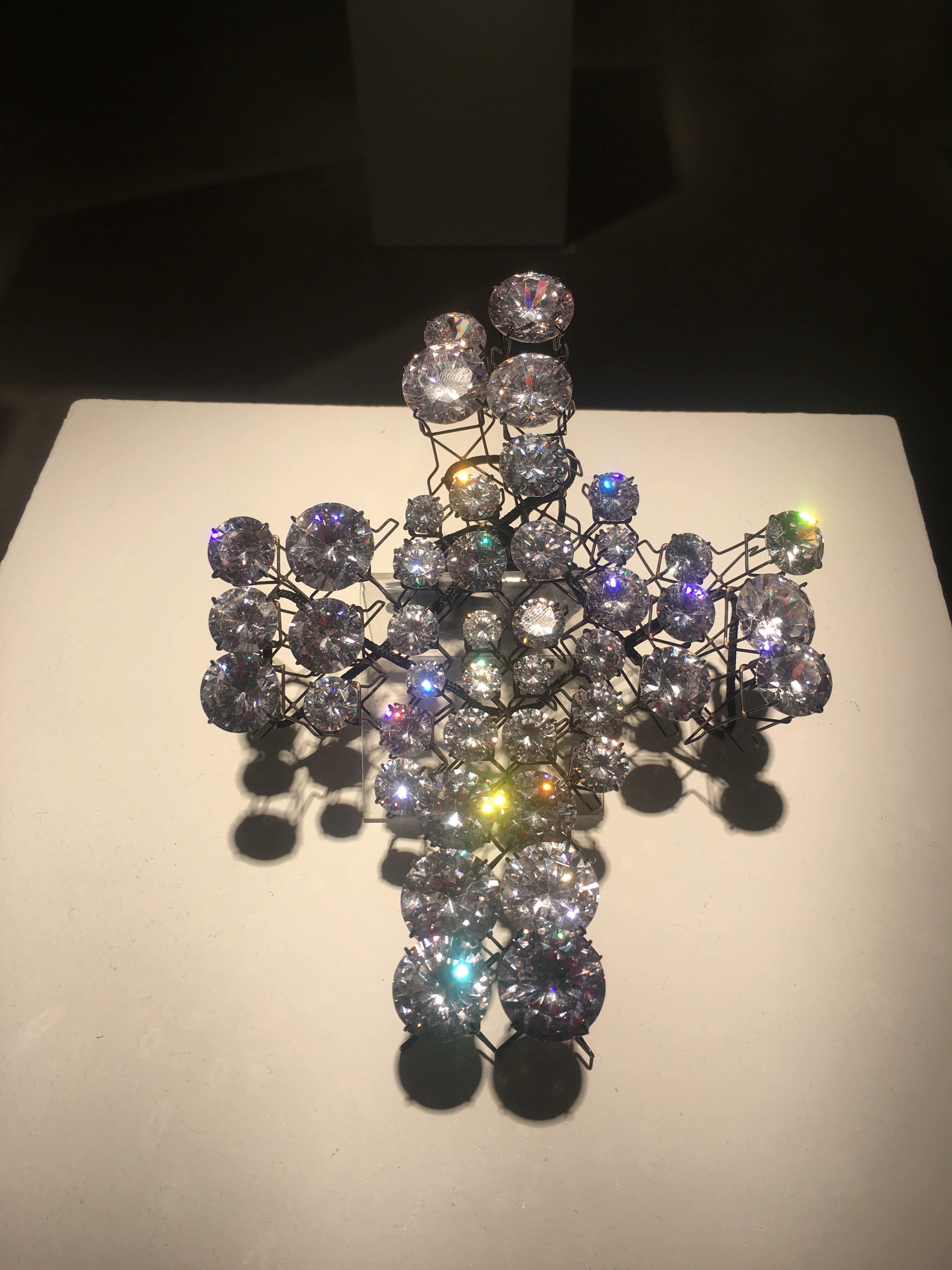 Adam Grinovich’s Battery 1 Cross, completed in 2016, is a large steel, cord, and cubic zirconia decked out cross that went disco. At every which angle the light hit it, shades of turquoise to violet and hazel green ricocheted off the cross. Incredibly dazzling, it’s the kind of item Field might’ve considered selling and would’ve styled as the ultimate pin on a leather or denim jacket or that old school canvas satchel you recently got around to using again. 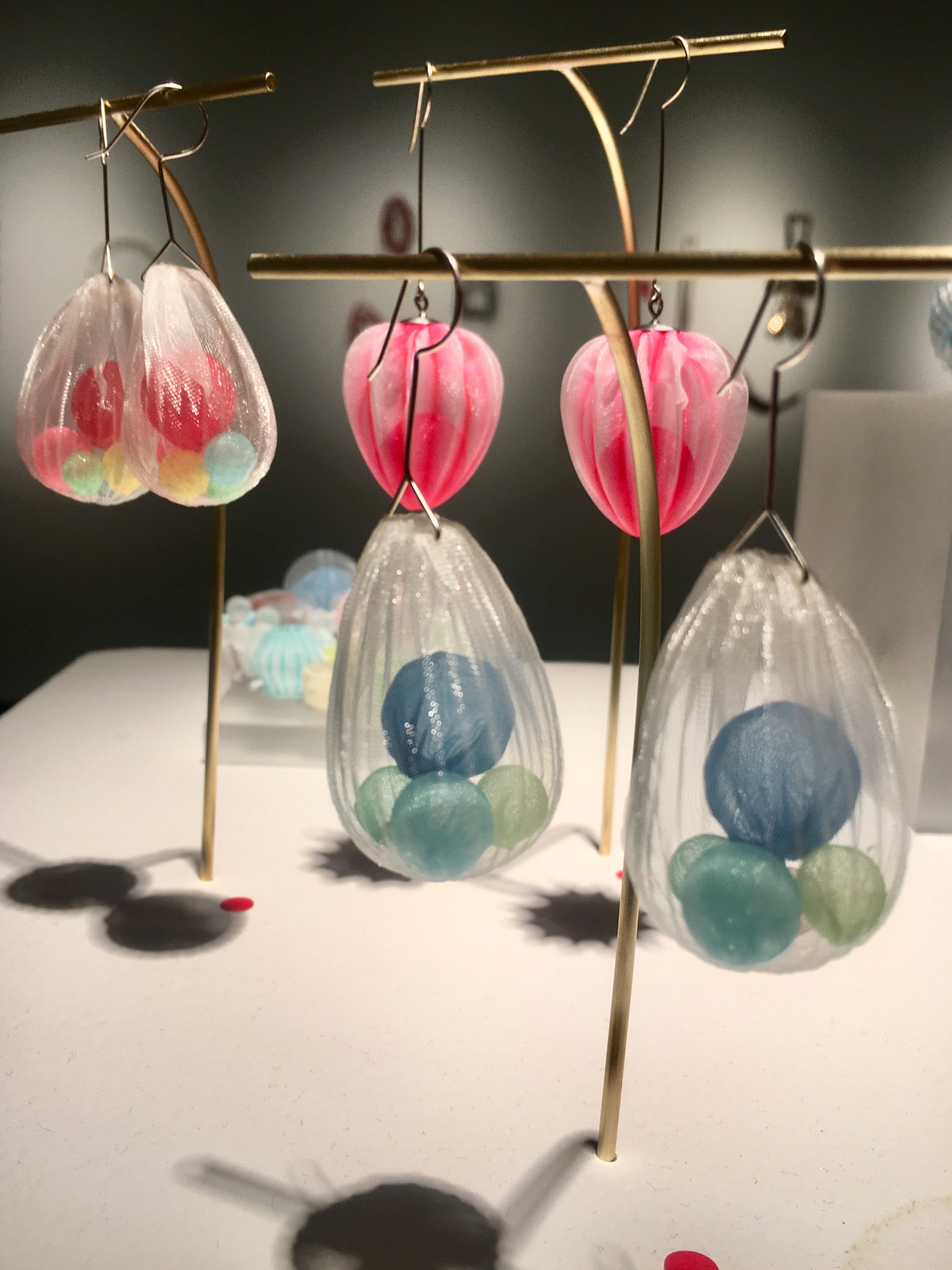 The artist that sent me back to the pillowed walls and floors of any indoor, kid-friendly amusement park was Mariko Kusumoto. Her Houzuki and Shizuku 1 and 2 bloated teardrop earrings and bubble-shaped ring were made of transparent polyester, (one was of Valentine’s Day red), sterling silver, and contained balled up colorful polyester inside. Appropriately and thankfully, they bounced and shimmied once touched or worn, Kusomoto’s provided the cutest, spunkiest examples of experiential art in Adorning Boston. 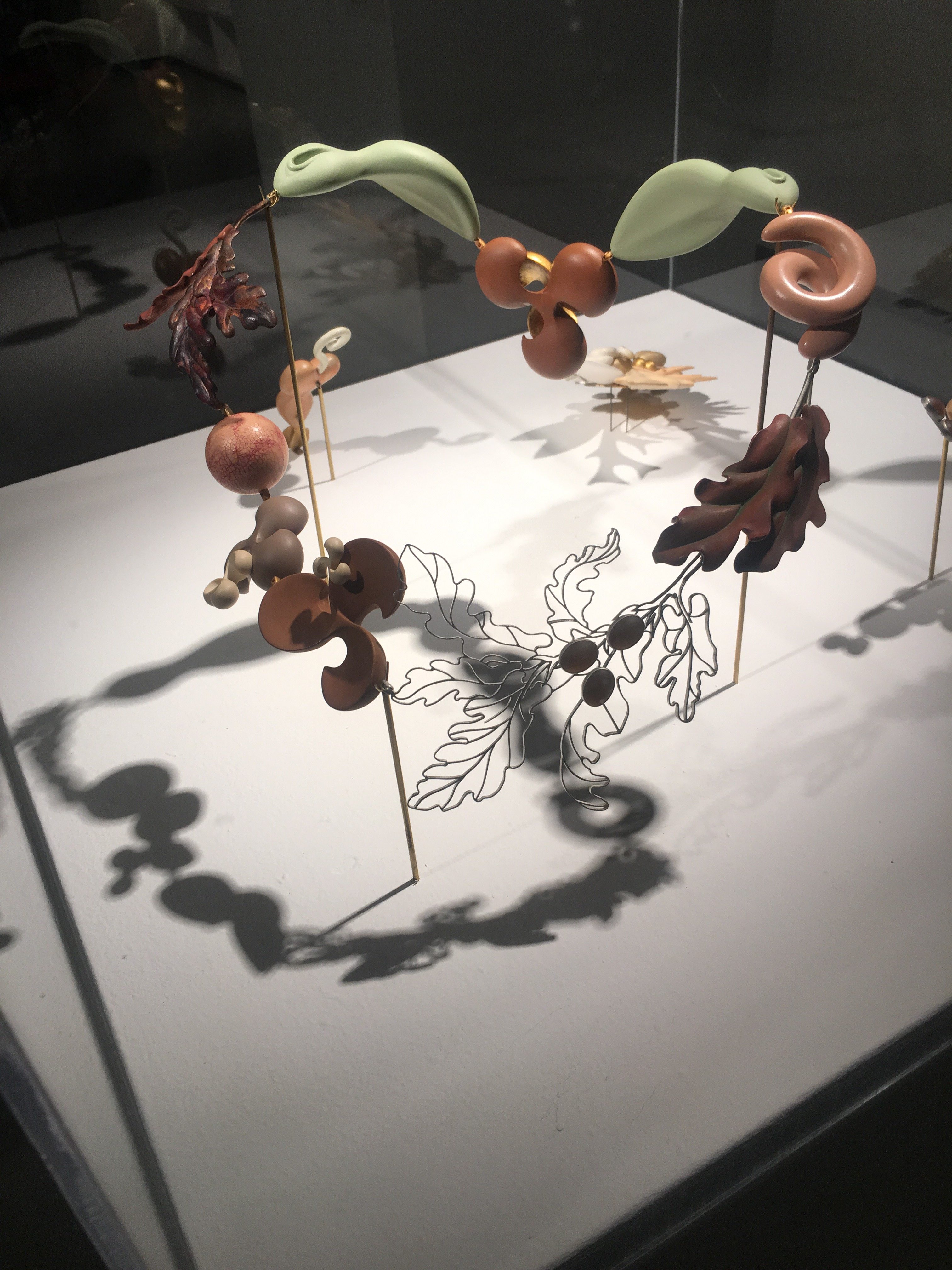 BRUCE METCALF, NECKLACE FOR A DRYAD

At an astounding $10,000 for purchase (all of the jewelry was available for sale), Bruce Metcalf’s romantically driven Necklace for a Dryad (don’t worry; I got you. A “dryad” is a spirit or nymph of a tree in Greek mythology) was made with mixed mediums. It recalled the kind of creation you might’ve made as a child with the most malleable sticks in the ground you could find and treasure for the rest of the day. There was also something sobering of Necklace for a Dryad too, considering its muted autumn palette, its quieted presence, and its nod to regalia with the diamond rivière shape.

After I surveyed Adorning Boston, the sprightly George Summers, Jr., who’s been with the Society for over 20 years and is currently its Retail Curator, clued me in on the exhibit’s discreet connection to the Museum of Fine Arts.

“One of our board members, who’s also on the board of the MFA, approached us last year and said that they were going to do a show on metalsmithing and jewelry at the turn of the 20th century in Boston. Many of those jewelers were a part of the Society at the time. Or, had their work in our galleries.”

The Society of Arts and Crafts was founded in 1897.

“She thought it’d be a great idea if we mounted a show, in conjunction with the MFA’s. Only, our focus would be–instead of the historical, which is what theirs is–more of where we are today. They’re meant to go as complimentary exhibits.”

At the MFA, Boston Made: Arts and Crafts Jewelry and Metalwork, will be housed until March 2020 and visitors are offered a historical take on jewelry craftwork and the items there are more akin to the glamorous, heavy jewel-encrusted designs we associate with royalty, legacy fine jewelry brands, and Liz Taylor. 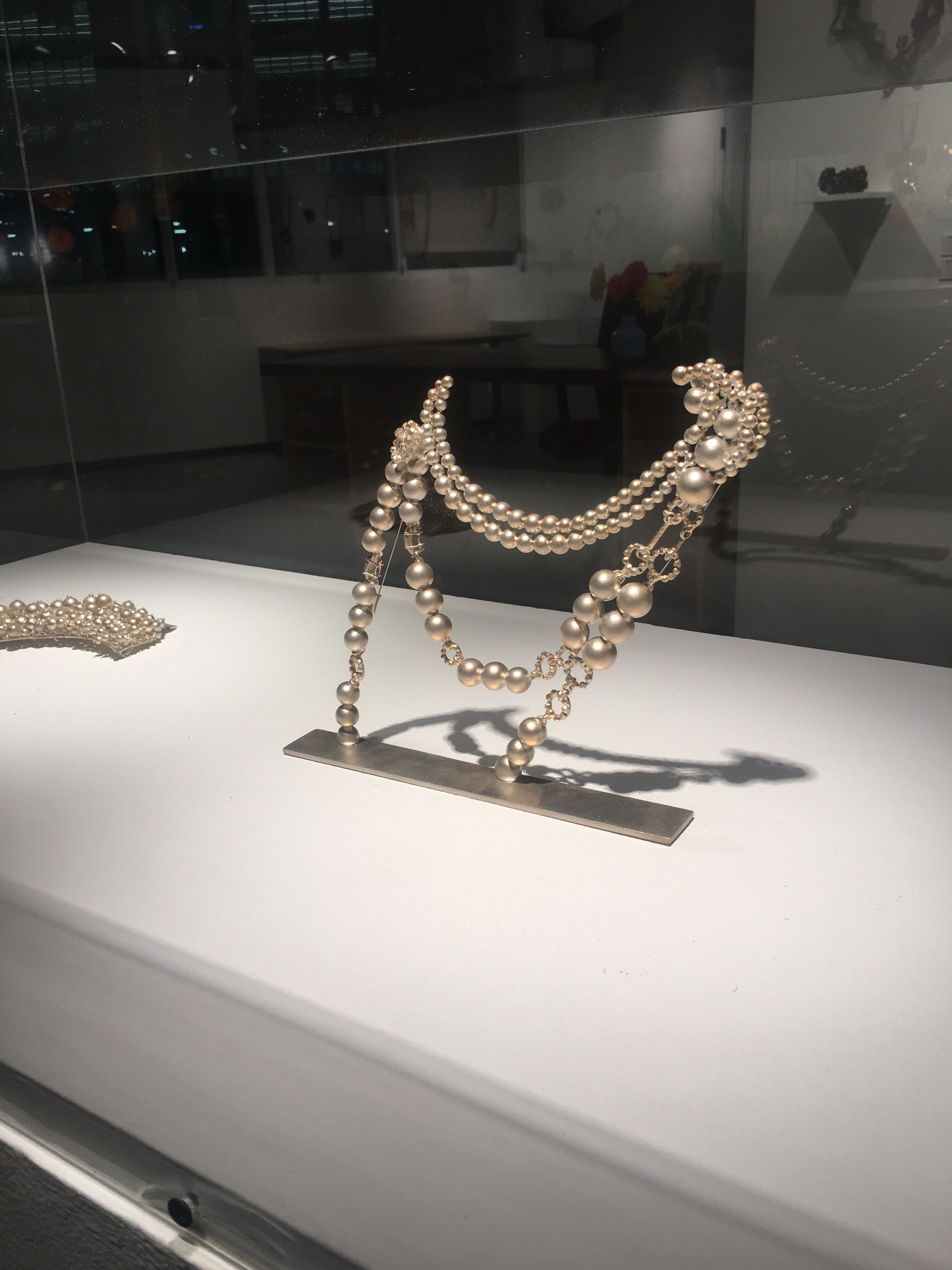 After we left D’Aquino’s wire island on the wall, Summers led me to Anya Kivarkis’ Object Sequence III, II, and V, all created in 2017. On my own, they inexplicably reminded me of Chanel pearls. All three pieces were the same cream shade I’ve associated the French house pearls with, and the necklace in the middle had small, medium, and larger-sized pearls threaded amongst each other. The necklace was also frozen at a tilt inside its glass case. Prior to Summers’ explanation of its pose, I couldn’t have guessed why.

“They are sculptures. They can be worn as a pin. You can see the clasp here. The very interesting thing is that they are based on photographs of people actually wearing jewelry and how and when photographed, jewelry moves and slides along with you.”

I peered at Kivarkis’ ingenious work closer after Summers shared this.

“That’s what the artist did. It was a friend of Kivarkis’ who came in and told me that that was her thought process. You could almost imagine someone leaning while looking at it.”

On the wall behind Kivarkis, was the work of a very iconoclastic figure in the art world, Joyce J. Scott. I hadn’t heard of her until Adorning Boston, and I’m terribly late to this party.

Hailing from Baltimore and a 2016 MacArthur Genius Fellowship recipient, Scott’s art unequivocally speaks to the experience, history, and thankless fortitude of Black women, Black people, indigenous cultures, and the exponential powers and influence of social constructs.

In March 2018, Scott was profiled for The Nation, and writer Jillian Steinhauer interlaced a lot of commentary about the position and potentially repurposed, or bolstered, mission of Scott’s art in a Trumpian age. I read that profile after I had viewed her work at the Society. 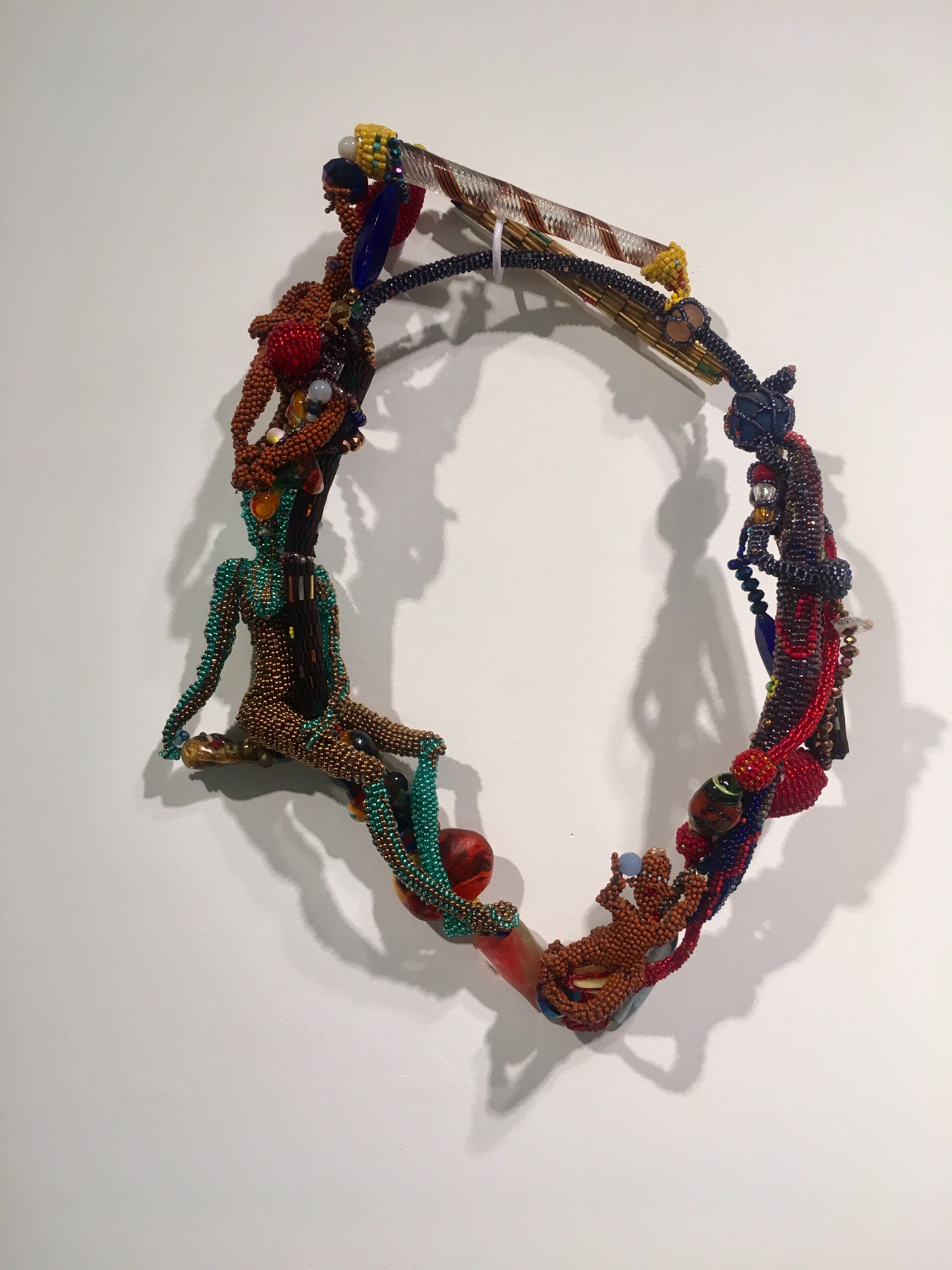 Her two items of jewelry here are decidedly more lighthearted and whimsical. Simply noted as Blue Bracelet from 2014, and Rods Neckpiece from 2015, both are made of glass beads, created by peyote stitch, a favorite of Scott’s since the mid-1970s. The neckpiece is big with the distinct feature of a presumed female figure with emerald skin, wearing a cafe brown sleeveless romper (my guess). She sits cross-legged and leans against what makes the strand of the neckpiece that includes a horn and fused glass.

Completely undeniable and admittedly garish, the beads themselves are the star here. Like a million little pieces, together they’re robust and formidable in the creation of Rods Neckpiece.

It’s certainly a thoughtful work of art in the guise of jewelry, which encapsulates Adorning Boston.

By way of its funkier take, the artists, of both Art Smith’s time and Scott’s, honored at The Society are the unsung heroines and heroes of jewelry innovation.

In retrospect, while writing this, I hoped for visitors unlike me, willing to wear unconventional jewelry almost all the time, left the exhibit more open to the idea that not just Cartier panthères or classic ring bands make jewelry worth wearing. Though honestly, every item has a story and every house a colorful past, as I recently learned when I watched Crazy About Tiffany’s, a cheeky Tiffany and Co. documentary. (It’s on Hulu!)

There are so many kinds of beauty for us to adorn ourselves with. What Adorning Boston teaches is that we’re privileged to even wear any and all of these items as a part of our everyday life or on our most wonderful days, created by artists who were steadfast on the vision, the journey, and message of their jewelry creations, no matter how simplistic or outré.

Adorning Boston: Contemporary Studio Jewelry, Then + Now was on view through February 17th. More information on the exhibition and The Society of Arts and Crafts can be found here.