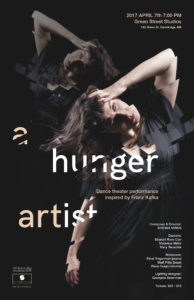 A few weeks ago I saw “A Hunger Artist” at the Dance Complex in Central Square. The show is coming around for the Furnace Fringe Festival July 7 th – 9 th at BU. You can catch it 7/9 at Boston’s Playwright Theater at 7:30pm

Simona Minns‘ “A Hunger Artist” is a dance-theater work inspired by Franz Kafka’s short story by the same name.

Set on a bare stage with three musicians, two dancers, and composer/director/vocalist Simona Minns, the performance reads as contemporary jazz musical with experimental hints and nods scattered throughout the 60 minute piece.

Working from the public domain is a curious thing. It’s an almost bizarre freedom to take someone else’s work—gobs and gobs of it, and apply your vision, interpretation, and experience on top. It allows you to go deeper into your concepts without building a whole foundation for your work to stand. 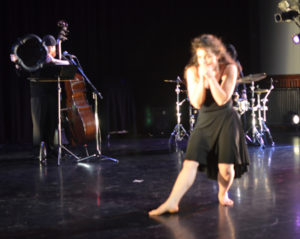 In Kafka’s text, the hero descends from his glory days as a revered public performer to sideshow attraction, and finally to utter self-destruction. It’s worth considering the twist at the end of the story. The Hunger Artist confesses that he fasts for lack of joy & desire, not– -as we were led to believe—out of perseverance or belief in his work.

All the pain he felt from lack of recognition reveals itself to be transmuted self-hatred. Instead of telling his truth, he asks for glory for doing what’s easy– -sitting passively in his despair, awaiting attention and acclaim.

Minns, in her retelling, likens the Hunger Artist’s indulgence to our contemporary love affair with social media, the desire for constant approval, and a tendency to stay in our comfort zone. Abandoning the matter-a of-fact tone of the text, she weaves an atmospheric tale with movement and sound. In the audience you feel the sultry emotional fanfare of putting yourself in the spotlight and the highs and lows of baring your essence to a fickle public.

Each performer crosses disciplines, bringing voice and gesture where you might not expect. This adds a kind of lopsided tapestry to the show; framing top notch musicianship and refined dance against new, sometimes awkward expressions. I appreciated the morose synth tones against the exquisite piano (Rinat Tregerman) and the way the musicians passed through the invisible barrier as accompanists to take an active presence on stage. 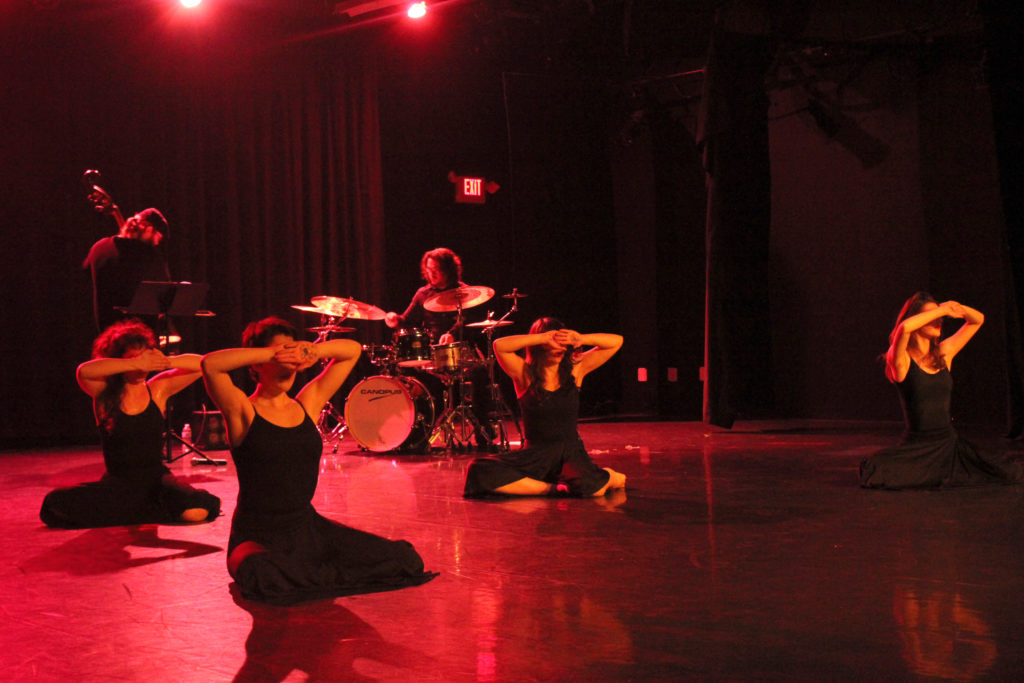 Minns vocals– -bare, thick, and compelling– -carry the story from start to finish. It’s a feat to drive the story as a single vocalist, and you can feel that by the end of the show. Minns is working the hardest of everyone, threatening to falter or break.

And this I see– -after reading the story– -might be part of the point. Initially I wished Minns had set her vocals off with another singer. The depth and agility of her voice is felt strongest after periods of noise or climbing up out of silence.

Now I see that this exhaustion, the hollowing out of aloneness could be what she wants to cue us into: the stubbornness (and vanity) of an artist compromising her human-self for her art. 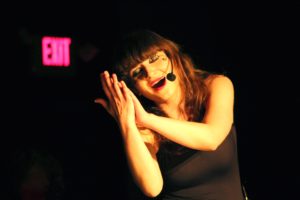 Where is that line when one’s actions cross from being about the creation of something transcendent, a thing separate from yourself, and turn instead into self-indulgence, a longing to be superhuman, more than everyone else?

The bassist reads from the text and dancer Searlait Carr elegantly contorts her body and collapses. Each performer in different moments plays the watcher, the interpreter, or the observed. There were many exquisite moments of the piece audio and visual, but I left feeling unsure– -who was I rooting for? And what was lost?