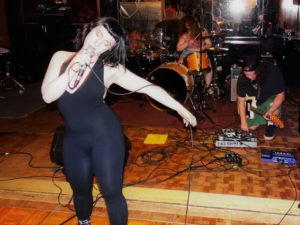 Photos by Michael Achille
“Move up! We’re here to sweat together!”

Two songs into one fearless scuzzromp of a set, and Peach Ring frontwoman Ari has hand delivered a handy mantra for the drenched in the rapidly swampifying Cambridge Elks Lodge. Boston’s dedication to the basement gig aside, the packed crowd scrambling for relief in from the tropical conditions downstairs makes for quite a sight. Soggy punks dash up the steps, opening the door to fresh (read: cigarette burnt) air like fish gasping to the surface. Curious heads crane necks around the motionless fan in the back of the room, certifying with sad eyes that, yes, it’s actually broken. The end of a set cues a low-tide rush of denim from the stage to the bar and back again. 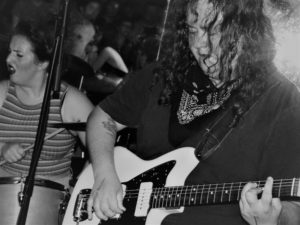 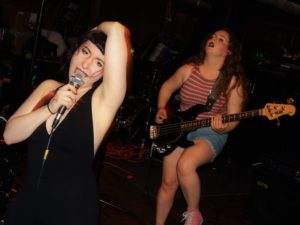 But Ari and Peach Ring, barking ghostly reverberations through the mic like a coach, have the real playbook: throw your body into it, lean into the amps, and sweat together. Their music – elastic, bouncy, and compact – packs a short, sugar-punch rush that matches the name within seconds. Consider set opener “Fucking Kill Me”. Opening with a squelching scrape of rhythmic echoes courtesy of phenomenal guitarist Rose, Adrienne’s drums trampoline double bounce the entire affair into a left turn, fists raised rager with no warning. The chemistry between these two is gripping, but necessary. Peach Ring’s songs dart between fast-paced thrash riffage and slower, funky dubbed out noise hallucinations at a pace that would snap lesser bands in half.

Beware a drum roll coming from Adrienne, she’s about to throw you out of your head. She plays with a singular abandon, leaping up and down from the throne and catching the last cymbal splash between both arms as if the kit was constantly running away from her. Closing with a howling crash of a number entitled “Cool Boy”, the trio bounded off stage and into a lovestruck hometown crowd. Brush your teeth after the gig or they’ll rot your teeth. 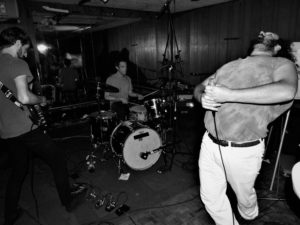 A few puffs of night air later, the basement door was already pounding, a signal that the next act, New England Patriots, had started their set. Door opens and WHAM! You’ve walked into a living avalanche! Stalking through the crowd, eyes bugging wild, Colby’s vocals certainly sound like those of a man trapped beneath one. Occasionally lurking behind a screen, manipulating what must be a series of hellish contraptions, his vocals blurt out like sinister, mangled incantations. Drums and guitars duke it out for supremacy. Luke Einsiedler’s distorted buzz knifes out to the left, and the toms roll away, dodging to the right and hooking back in for the snare inflected crash to the dome. From a perch on the couch, a whirl of Pats Fans spirals in unison below, striking out with clenched fists at all the right moments, threatening at all times to spin off into a pit but calmly parting when hip priest Colby directs them. The din stutters to a halt, you walk over to the bar and piece together your explanation for how a man with a recorder just put your eardrums in the hospital. 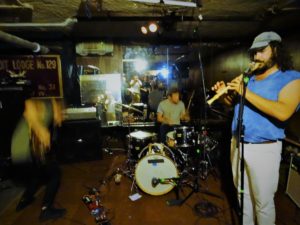 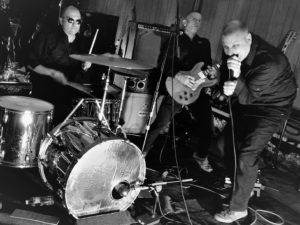 Without any reference for the screeching, hissing, buzzing sensory overload that often comes with the “noise” label, the genre can seem harsh, aggressive, and forbidding; when a soundscape is actively COMING AT YOU, negativity and fear (unfairly) springs to mind. Not so with Providence’s Doomsday Student: They’re here to harvest souls and completely unapologetic. Their sets are less a collection of songs than the motorized banging of some ancient, infernal engine, with the only piece of consistent melody resting on the shoulders of drummer Craig Kureck. The man is a marvel, holding up the weight of the group’s improvisations with the thick slabs of rhythm he creates from behind a titanic chrome kit. His precision and drive allow twin guitarists Paul Vieira and Stephen Mattmos to zip off screaming in any direction at a whim; like a space station tether, Kureck snaps them back into the beat before they can slip too far out into the void. 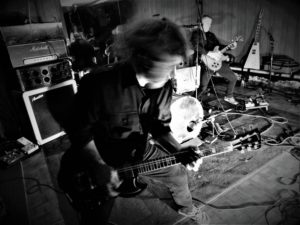 Footlights stretch their shadows high onto the ceiling. One rhythm completes itself and another, even more merciless, starts up. One, two, and a shockwave ripples through the crowd. All night we’ve been watching ourselves bop to the beat from the mirrors behind the band but now not one inch of it isn’t choked by with silk white fog.

Kureck, sticks tucked into the back of his shirt, is quick to remedy, scratching an “FML” into the mirror with a satisfied grin. Eric Paul, vocals, is a tortured mess, writhing with abandon, bulging with madness. Should we call an exorcist? The crowd, zombified into a violent trance, feels like it could go for days, but with an abrupt crash, the feast ends with the band disappearing into sudden, impenetrable darkness. 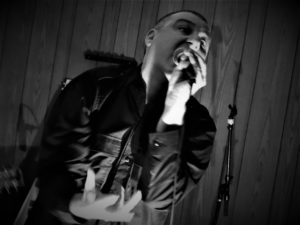 Blame the sweat-induced delirium. Blame it on the staff at the Elks keeping the lights on for most of their set. Blame it on Lydia’s blunt, brutal, hilarious stage banter; “What do you think this is? Some kind of circus sideshow??” she chimed in. But Lydia Lunch Retrovirus’ set felt in many ways like a light at the end of the tunnel. Looking around the crowd while the band, a self-professed and audience-confirmed “monstrous unit” composed of Bob Bert, Weasel Walter, and Tim Dahl, crushed through the set, there was an overwhelming positivity and sense of community. Illuminated faces beamed with massive smiles and friends, long-separated by darkness, pulled each other into dances.

And all of this over a cover of Pere Ubu’s “Final Solution”! 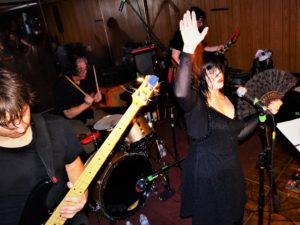 For the faithful, the Retrovirus came armed with a slew of grooves from Lydia’s vast catalog. An early in the set version of “3×3” was stunning. Walter creates an absolute horrorshow on guitar, screaming torrents of feedback that might actually be necessary to cut through Bert and Dahl’s locked-in battering. Dahl’s bass playing whipped through the crowd like a liquid knife, second only in ferocity to Lydia’s vocals, growling with a rage that added a new bite to a classic.

In her choice to do several covers, from the aforementioned “Final Solution” to a BLISTERING “Frankie Teardrop” as a closer, she reigned supreme as a bandleader, goading Walter into increasingly warped solos, pushing the band to the heights with commanding vocals and bringing it back down flat in abrupt dynamic shifts featuring spoken word. With her powerhouse versatility firmly intact and a band to match her ever-expanding dark visions, Lydia Lunch Retrovirus closed out the night and sent us packing. 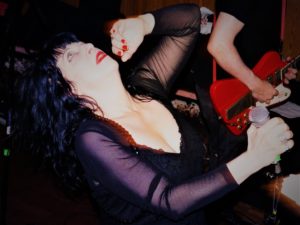