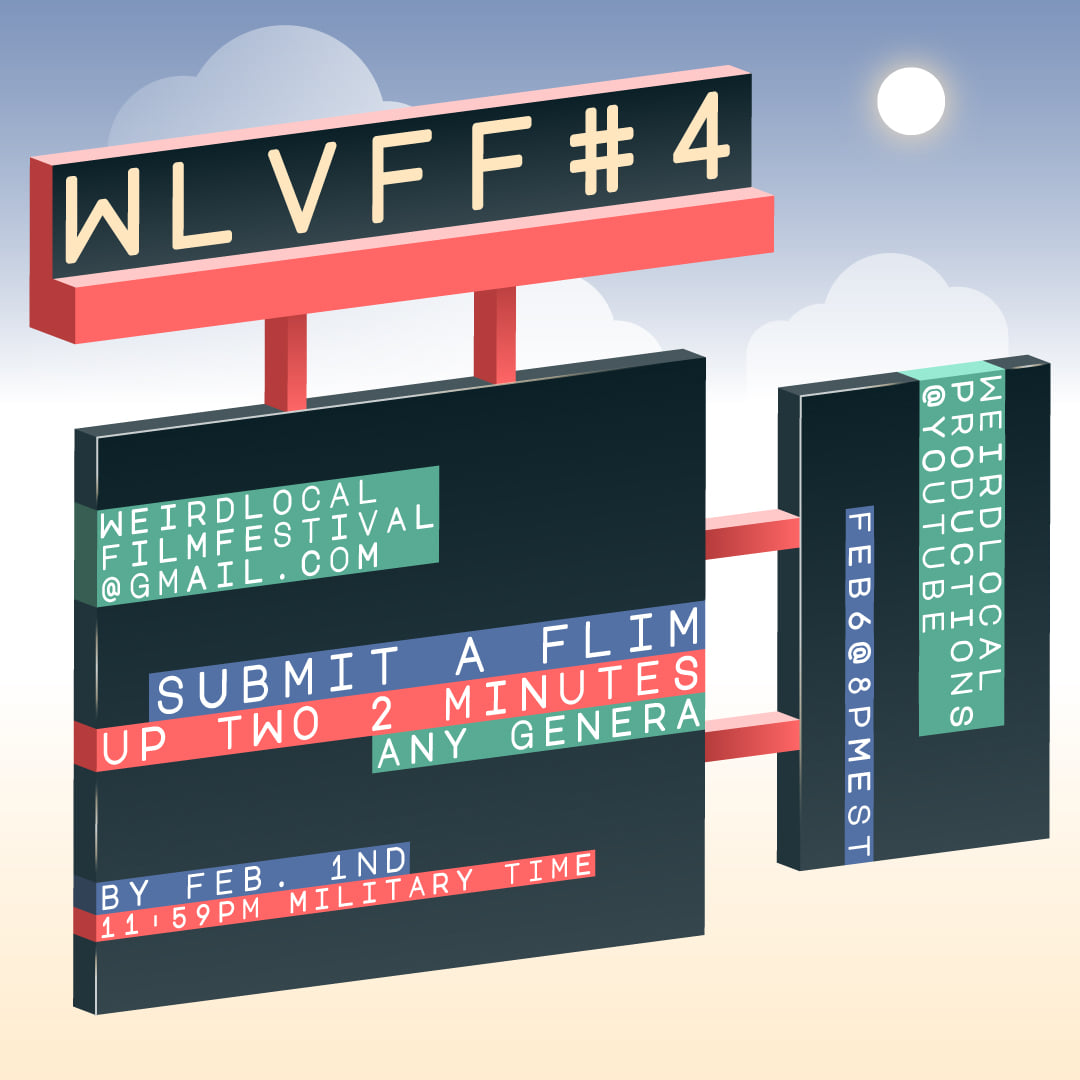 Dan Shea:
So who are you and what do you do??

Alexandra Derderian and Peter Levine:
We’re Alexandra Derderian and Peter Levine – both of us work at public access television stations and spend our free time making weird comedy videos as both Weird Local Productions and Triple Yeah Productions. We also help run the Weird Local Film Festival which is a quarterly film screening that features short works by local filmmakers. Since the pandemic, we’ve been hosting a virtual festival – and the latest installment will be taking place on February 6th at 8pm on the Weird Local Productions youtube page.

DS:
We’ve been in touch about your Advanced Education for Average Adults video series, and even run some on the Hassle site. Can you tell us about this endeavor, and what some of the inspirations behind it are?

AD & PL:
Advanced Education for Average Adults is an absurdist nightmare sketch show we make along with local ham Stuart Roelke. Each episode is about teaching weak adults, like us, how to function in our complicated society. We’ve sometimes said the show is kind of a cross between Tim and Eric, Sesame Street, and the X-Files. Part of the fun of the show is combining things we love that have no business being together. For example, our sex-less Human Pornography episode was designed to be like an episode of the Magic School Bus, and our upcoming Virtual Reality episode is influenced by Conrad’s Heart of Darkness, The Lawnmower Man, the edutainment game The Oregon Trail, and early Final Fantasy games.

It’s a bit of a mess but it’s very much our tastes and since we have no money on the line (no producers, executives, or whatever) we can just do it.

DS:
You know I love the democratization of the arts, and you all clearly take it to the streets in a manner of speaking. Is there any underlying philosophy to your projects that you can speak to? Any long term goals for your loose collective?

AD & PL:
We don’t have a lot of money to throw around, but we have ideas, enthusiasm, and determination. And since we work at public access stations, we’ve been able to utilise the studios, equipment and community for our projects. So maybe the philosophy is figure out how to make things for free so you’ll always be able to make things. There doesn’t seem to be a good excuse anymore for not executing one’s creative whims. A lot of us don’t
have much or any formal training in video, we are figuring it out as we go.

The technology is there, and you can learn most anything online. So all you need is a community who is down to help each other and then you’re set. For Triple Yeah Productions, there is a philosophy of uncovering comedy and weirdness through improvisation and building a space for play through the shooting, editing and writing process both in the live shows and short films.

As for long term goals, more partnerships with arts organizations and more collaboration among communities. The Greater Boston area art scene is cool but weirdly fragmented. Every time we think we know what’s going on, there’s a whole new pocket of cool shit happening. We have to figure out how to support each other and lift us all up.

DS:
The films submitted to your fests, who is making them? Do you find that they are professionals having some fun? Film or video students? Everyday folks letting their creativity shine? Or is a pure mash up of all of them?

AD & PL:
It’s all over the place from noted professionals to baby’s first movie. It’s thrilling to watch so many of these back-to-back, every film has so much personality, but before you know it, we’re onto the next one.

DS:
Weird Local Virtual Film Fest #4 is upon us, what’s the deal and what can we expect?

AD & PL:
It’s a collection of two minute or less locally-made films – and it’s awesome! We have beautiful animations, moody films shot on tape and digitized, masterpieces, and impulse creations. A whole spectrum of feelings. You can watch on February 6th at 8pm on the Weird Local Productions youtube:

as well as on the Triple Yeah Productions youtube page: