On March 8th, Jamaica Plain Neighborhood Development Corp threw a hell of a pop up party in Jamaica Plain to promote local artists of color. The old vacant Veterans Outreach building was at capacity with paintings, music, poetry and all around good times. There are 10-15 vacant properties between Jackson and Hyde on Centre street in the main thoroughfare and there couldn’t be a better use of the space than to celebrate this neighborhood. I mean, it’s a fucking no brainer to anyone who cares about the space they live in. Most of these empty storefronts are owned by landlords who have little interest in such a venture but JPNDC is not such an organization! They saw their own empty space and decided it could be of good use to the newly coined Latin Quarter and put in the elbow grease to showcase artists of color who had a connection to JP. 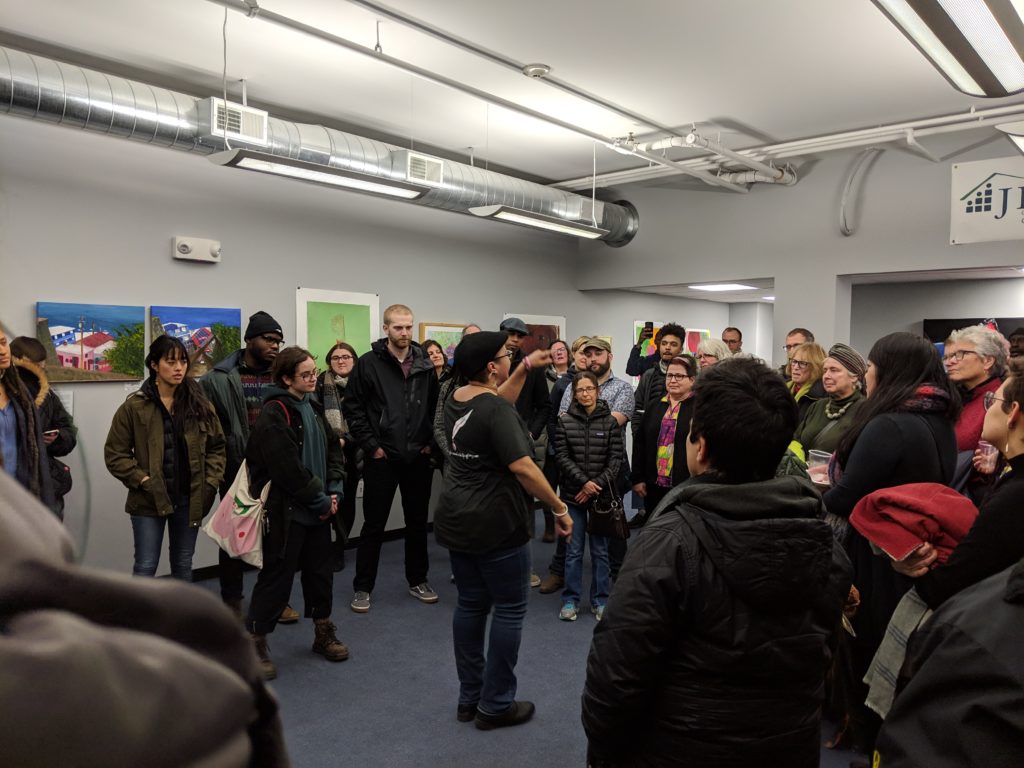 We arrived in the middle of La Poetica’s fantastic poetry reading. The space was fully captivated; it was a nice touch to present this side by side with the visual art. I don’t consider myself a poetry aficionado by any means so I won’t even attempt to break down what she was up to but I will say it was an interesting addition and brought a great energy to the show. There was an unpretentiousness to this pop up that unfortunately doesn’t always exist in art spaces. It made it feel like a party and with that feeling comes a relaxation that lets one take in the art on the walls in the best way possible. 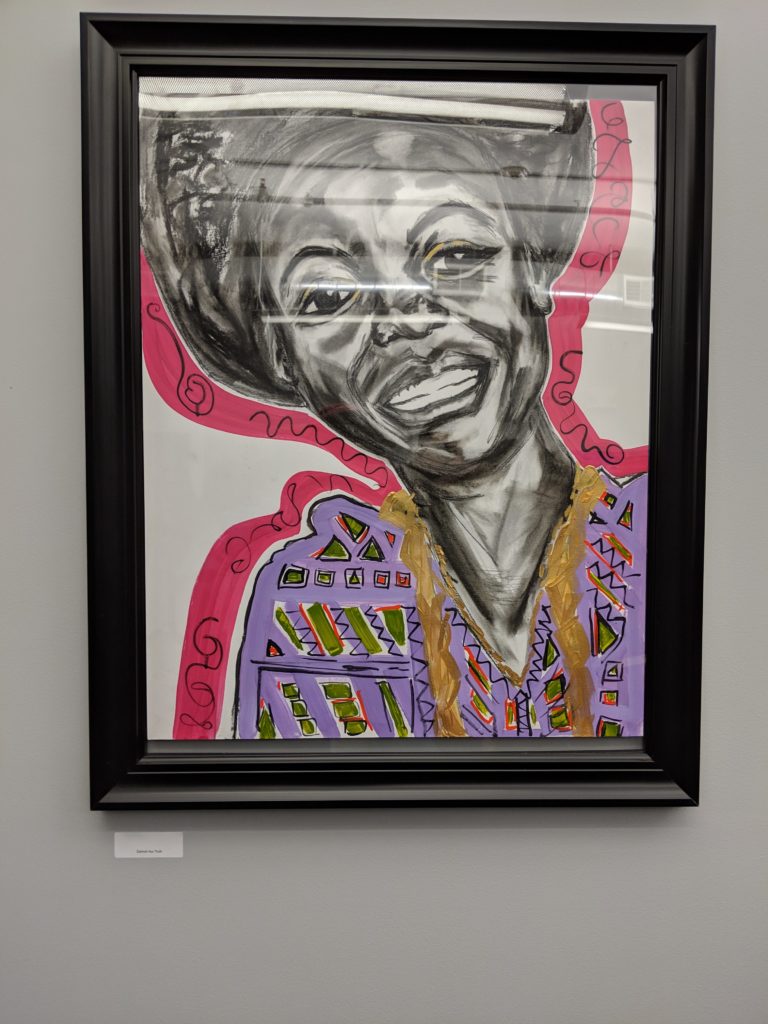 Zahirah Nur Truth had a collection of high energy drawings mixing a flat and patterned style with an expressionist portraiture. The flatness of the patterns in the clothing pushed and pulled against the more modeled faces in a way that adds depth to the modeling and flatness to the pattern. The difference in mark making between the faces and the clothing presented in different styles and mediums makes the work feel electric, which is even further accentuated with the energy of the charcoal marks and the brightness of the marker. This is when dissonance really works—when the opposites accentuate each other. 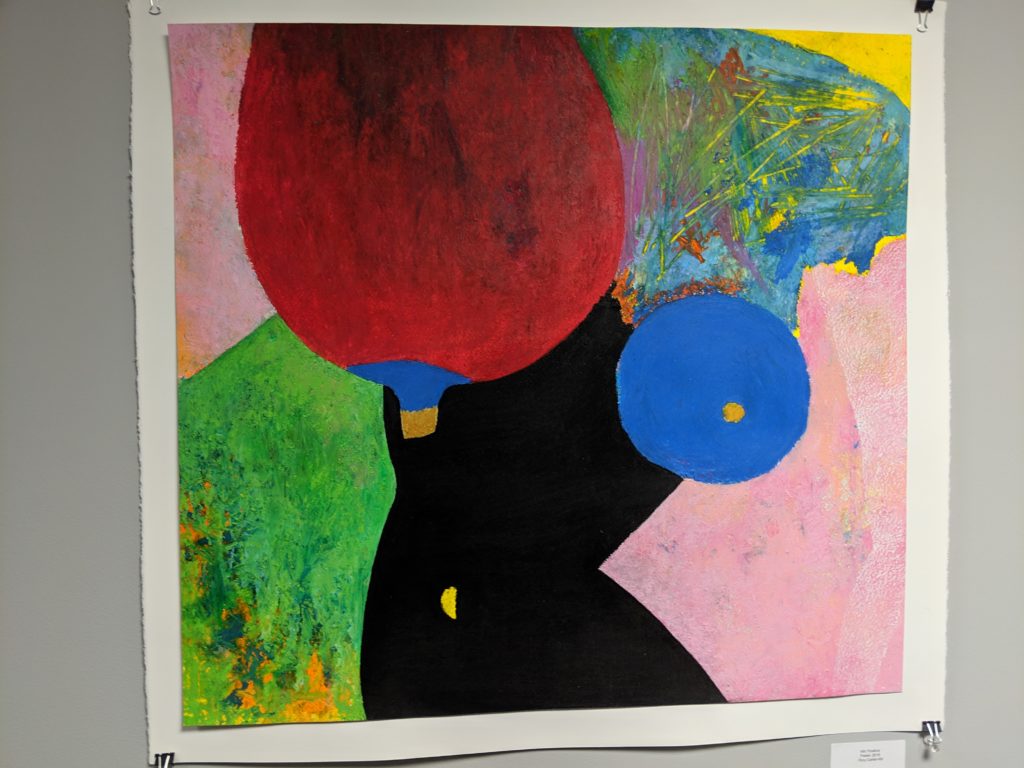 Tony Carter-Hill created some of my favorite pieces in the show, with flat planes of shapes that suggested figures, people, and stories. The work was more than just suggesting figures though, it was almost narrative painting where the image is deconstructed and then re-constructed again as puzzle pieces, fitting together. Each section of composition had a different treatment but all cohesively worked together to form the image. One section might be flat black, another might be a red with texture, and yet another containing expressive brushwork, but all felt like they were one piece when viewed as a whole. Carter-Hill’s works give you a lot to digest and a lot to keep coming back to.

In this piece the pinks tie both sides of the composition together very nicely and are also in juxtaposition with most of the other color choices which are from the deeper color pallettes. They frame the body which gives you a background (so to speak), but it does anything but fade to the back. The body being composed of the black torso and the red and blue boobs have an amazing sense of connection and disconnection at the same time. Like with everything in the piece, you can take in each part separately but you come back around to their relationship to each other. 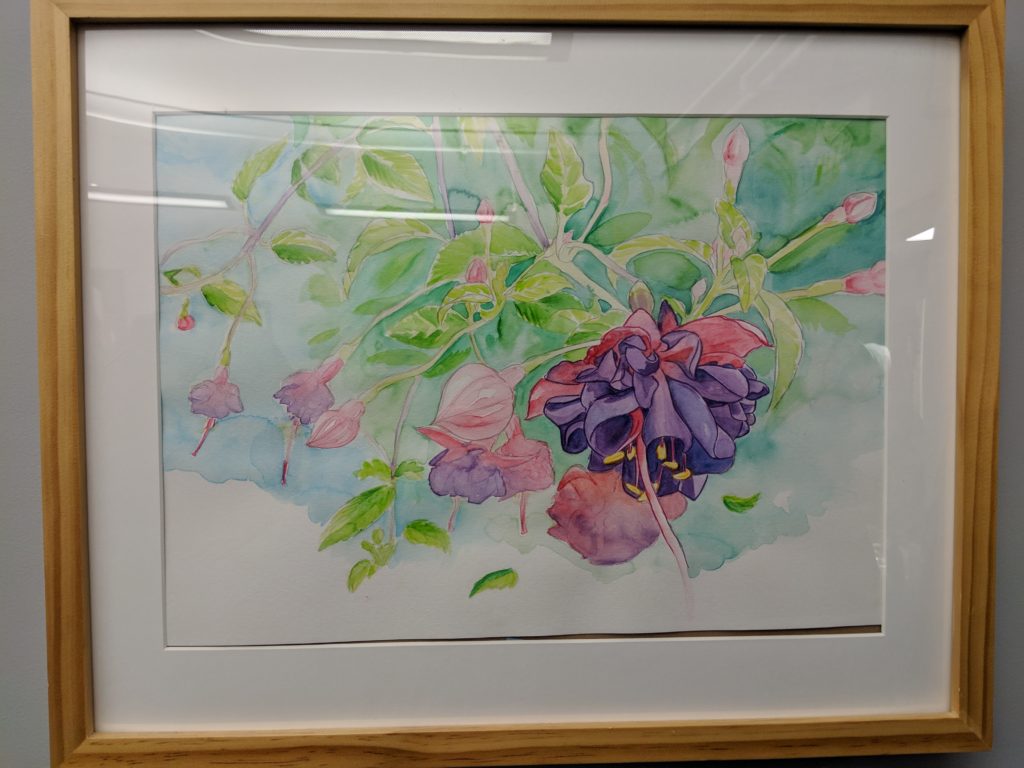 Veronica Martell showed a selection of beautiful and delicate watercolors filled with organic plant shapes. One of the strengths of this show was the diversity of work that it encompassed—figures, landscapes, still lifes. The cohesion of the show wasn’t in the works themselves, rather, the artists and their connection to this neighborhood. When the connecting element in the show is something outside of the artworks, it’s always interesting to interpret the work with this in mind. How does our environment effect us as artists?

I spoke with Samantha Montaño, a senior resident with JPNDC, about their goals when organizing this show. She said, “We would like to push folks to have a conversation around the vacant spaces in our community and how we can encourage landlords to be invested in creating a vital and alive space in Jamaica Plain. We also would like to create and opportunity for artists of color to show and maybe sell their work in a free space. We would like to create more equitable access to art so folks do not have to leave their neighborhood. We would like to talk about displacement of black and brown folks in JP. We want to invest in the community that was involved in making JP what it is and start to find better strategies so those folks can stay.”

DJ Nomadik was keeping the energy high, and between the fun music and the unpretentious eats, this pop up felt fun and lively the entire time I was there. For such a notoriously artistic neighborhood, JP has few active art spaces, so this injection of energy was a welcome addition and the neighborhood responded enthusiastically. Let’s hope they keep doing these, the artists involved all went home with a pocket full of money, and the neighborhood keeps fighting to retain its identity.