House shows are the lifeblood of any music scene. There’s something about seeing bands play in the unpretentious setting of “next to someone’s couch” that brings out the best or the worst in them and the availability of that DIY energy allow bands to have a learning experience or turn the corner into something special.  A shitty sound system will bring as many weaknesses out to the front as a good one but it also allows bands to find out who they are right in front of your eyes. Basically, it’s hard to not have fun and treat your music like simply a profession when you’re in the middle of a party and that tends to bring out a different kind of performance.

A house typically draws in a crowd that’s not there to be seen but there to have some fun and even if they don’t know the bands, that won’t stop the enjoyment. You know the floor will shake like it’s about to collapse when a band hits the mark and that the normal show etiquette is out the window but all this unpredictability has an atmosphere. When I was in Boston about 15 years ago there was a THRIVING DIY house show scene so I have been a bit disappointed to learn since my return that undercover cops and general crackdown has caused it to mostly disperse. This may also be because I’m older now and the kids all think I’m a narc and won’t give me the address for the house shows these days. I swear, I’m cool, like, I smoke weed sometimes.

Anyways, when I heard that one of my favorite bands was playing in a house deep in the Massachusetts woods, I knew that I must go west, young man, and see what’s up. 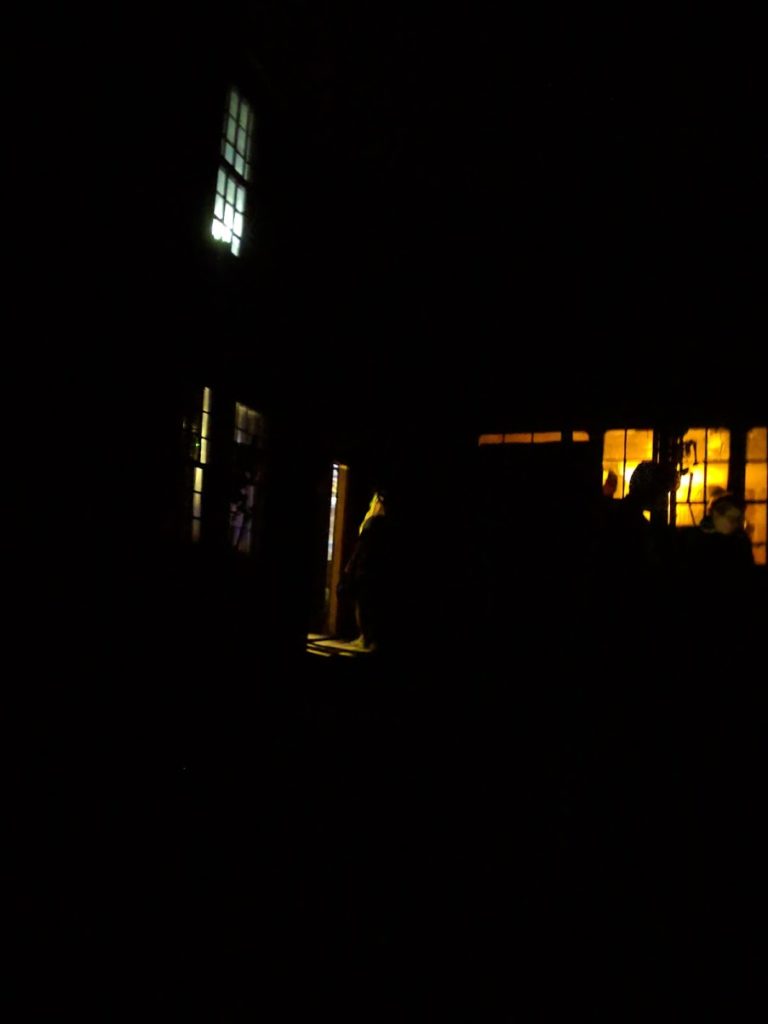 Entrance to the Hollow

My journey was long. Where is Cold Spring Hollow? I’m not really sure but it’s about an hour and a half outside of Boston. Once I left the highway, I was just rolling through sleepy little towns with no street lights and a couple of drinking establishments that seem like they were created for the sole purpose of getting into trouble. I passed by them all and the farther I went, the darker it got. I ended at where the GPS told me to, but it took me about 3 u-turns to finally figure out that this tiny street filled with unlit houses was my destination. I followed the sounds of voices to find a group of people standing in the darkness and I realized I had arrived. I’ll admit that the now pitch-blackedness was a little comforting as I knew that if some neighbor called the cops that it would take forever for the police to find this house, so I probably wouldn’t miss the set I traveled for. 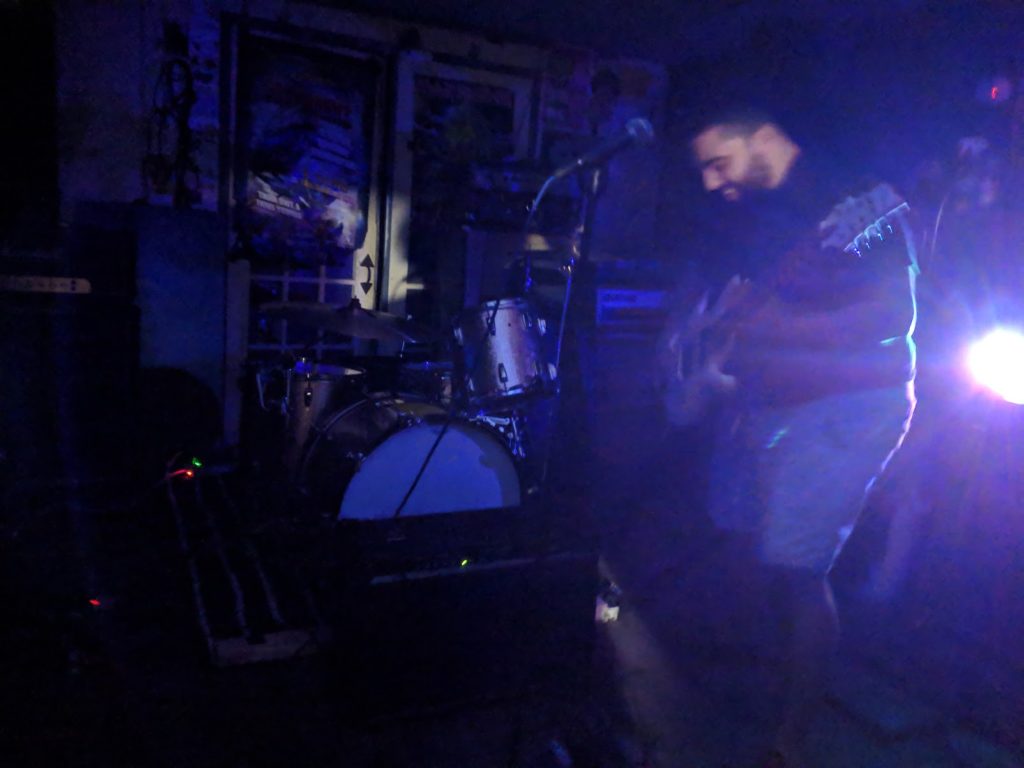 Brujo was up first and started off his set with about 10 minutes of combined clips where GW Bush was bungling his words. It felt a little bit like when your friend has you over to his house and suddenly pulls up youtube on tv and starts playing some clips. Like “yeah, this is pretty funny but weren’t we going to have dinner? Oh, it’s still going on? Ok.” After the clips, he launched into his set of one man Death / Grind. A man behind me screamed out “FUCKING BRUTAL” and I think that’s an apt description. The drum machine was blasted, beating like a dryer filled with all of your shoes as Brujo himself shredded away as fast as he could while growling into the microphone. Stylistically, it sat somewhere between Poacher Diaries era Agoraphobic Nosebleed and Assuck which is a good place to be nestled. It was a shorter set and the clips continued between the songs. It was a fun affair but the real star of the show were those jorts pictured above. They were hypnotizing. 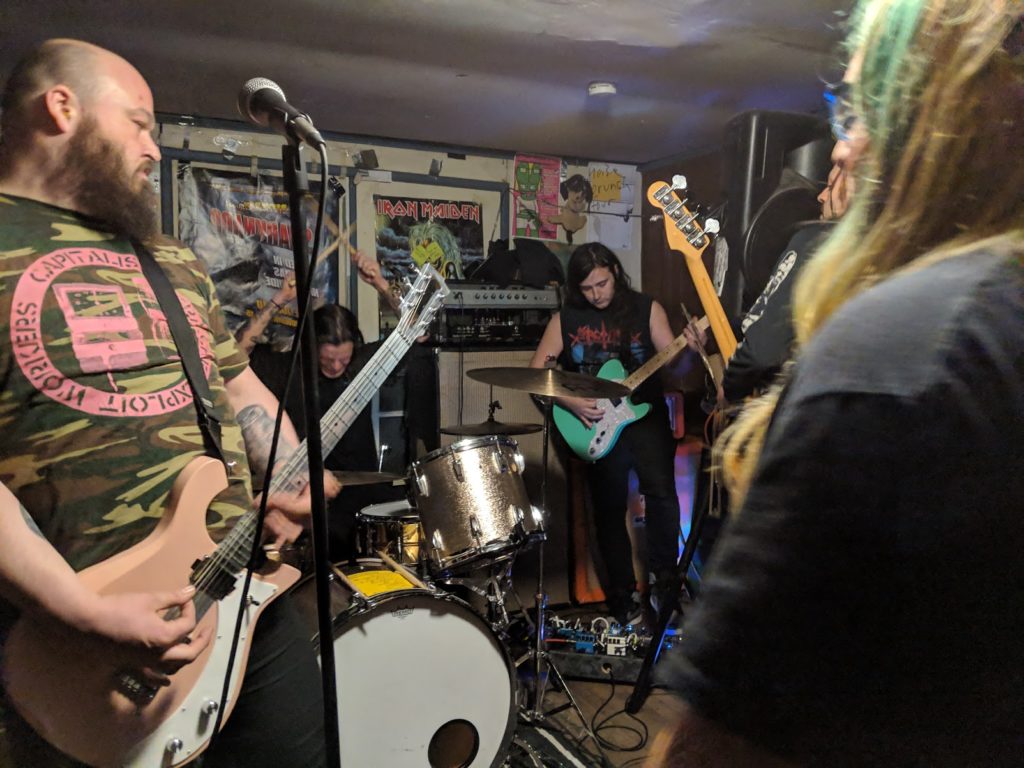 Next up on the bill were Eye Flys which boast an impressive band resume of past / present projects like Full of Hell, Triac and Backslider (all killer bands). This was my introduction to them but I knew they were doing this mini tour with Multicult so my expectations were high. They hit the “stage” hard with a no-nonsense set of noise rock living up to those high expectations. No time between songs and a limited amount of banter, they went straight for the meat and potatoes of loud and energetic rock sounding straight out of the Am Rep catalog with unexpected turns and harsh tones all around. They have the sharp, hairpin turns of the early Helmet records but had a distinctly modern feel more like their contemporaries in Fight Amp and Metz. The music was overlayed with the harsh shouting vocals that reminded me of a Silver and Blood era Scott Kelly in the best possible way. They played a really fun and energetic set and I’m stoked to see what comes out of this band. 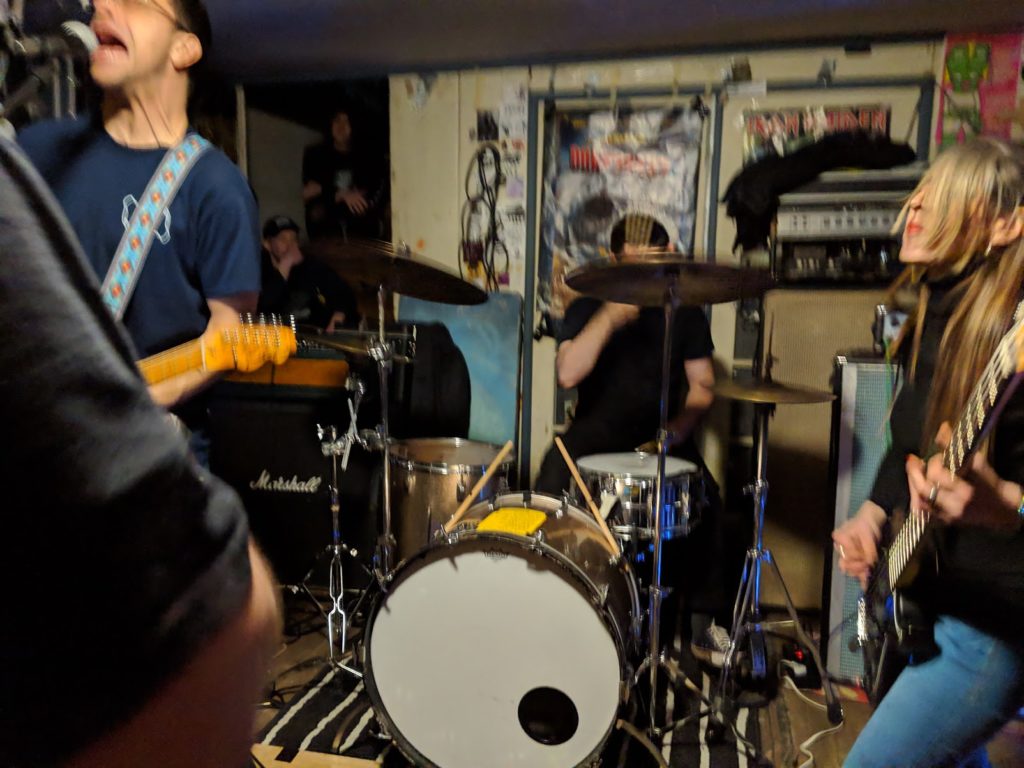 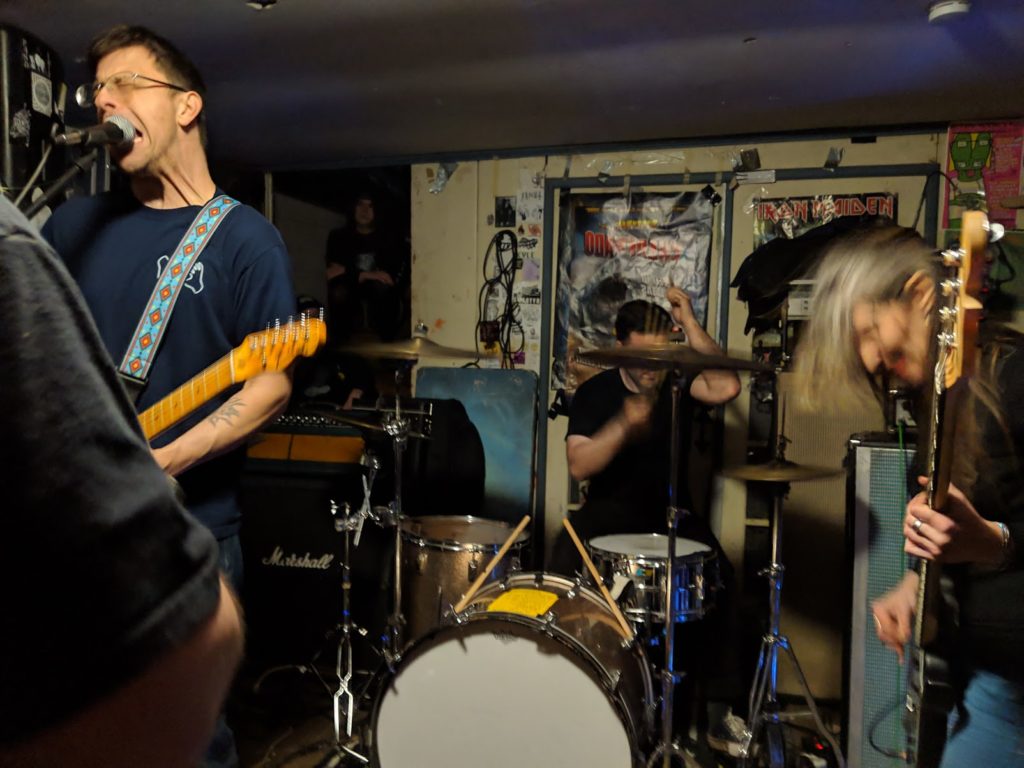 This Baltimore trio is the pied to my piper they drew me out of my comfortable Boston shell in the first place. In my mind, Multicult is the best live band out there today and as they’re getting bigger and away from playing spaces like this, so I wasn’t going to pass up a chance to catch them in a basement. They delivered on every promise even though they didn’t make any of them.

They’re three of the most technically sound musicians you’re going to find in the game but they use the technique they’ve developed in their writing rather than the execution. The songs are composed with an amazing amount of syncopation (and they’re only a three piece!) and all the components are both adding layers of complexity but at the same time fitting together and making complete sense in relation to each other. For as technical as it all is, it’s also surprisingly no-frills as there no extended drum fills or noodling. Everything that’s written into the song is there for a reason. Everything is patterned and repeating but the second time you hear it, it’s reorganized in a different way. It transfixes you if you’re thinking about it and the pieces that are constant get your ass shaking. This lack of frills allows them all to focus on bringing a crazy intense energy to the stage as it’s all rising crescendos and deep grooves. They played a set that was about 50% material from the new album that’s yet to be released and those new songs were some of the ones that were sticking in my head on the drive home. For a weirdo band like this to have earworm melodies is the sign that the new record is going to light this world on fire. They closed out their set with an older song, Jaws which is one of those songs that makes you want to shit your pants because you’re having so much fun. What a time to be alive.

This set had that floor feeling like a trampoline. People were packed in and sweating and the long drive seemed very worthwhile, like a good house show should. 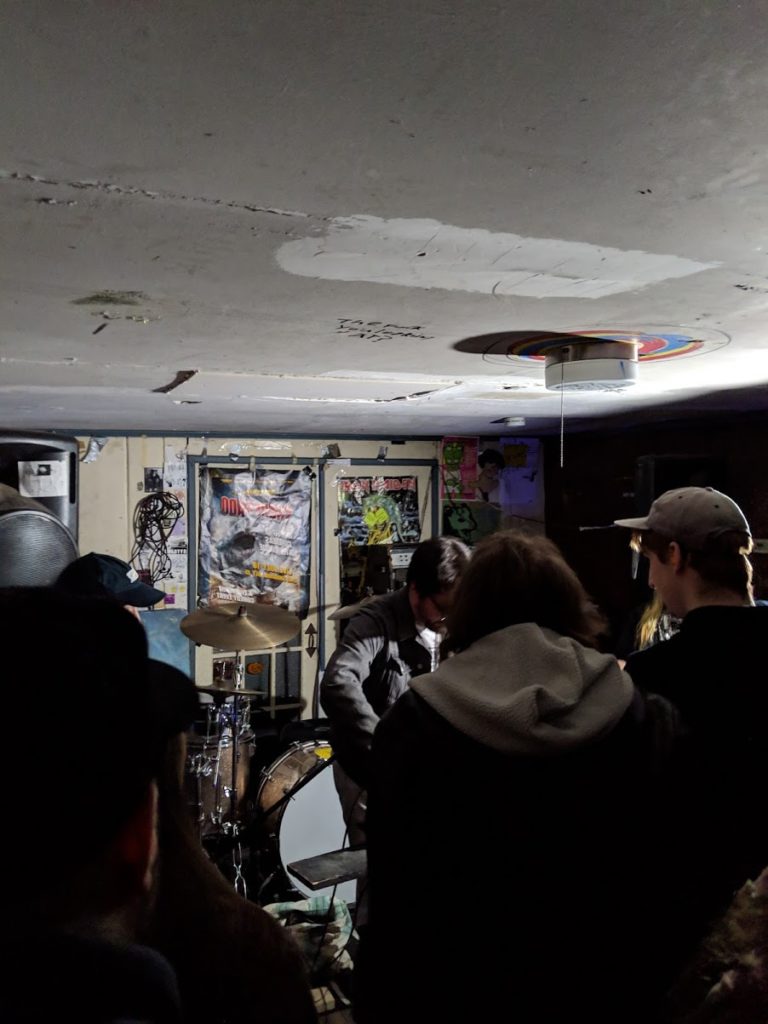 Closing out the night was a short bout of noise by Limbs Bin. The set was comprised of large swaths of silence with interspersed blasts of screaming and harsh noise. I was personally very amazed at how respectful the house show room was to stay almost completely silent during the 10 -20 second intervals. I almost wondered if it was TOO respectful as in if like a John Cage piece, the silence was meant to be filled in with the noise of the room but in this case there was none. Having the bridge between songs filled with someone talking too loud about their ex-girlfriend and beer bottles rolling across the floor would be a very different set than this one which felt more like it could have been in a music hall because people were so enraptured. The songs were short and abrasive clocking in at was seemed like the under 20 second range. There was some explanation of song titles and much like the grind / power violence that seemed to be a big influence, the lyrical content didn’t seem to be taking itself too seriously. I also realized half way through that he might be doing Haiku but everything being so highly distorted made it hard to count syllables. It came in, did it’s thing and then it was over. The perfect set time can do a lot for music and this one was perfectly timed out to leave you thinking about what you just saw. It was an interesting set. 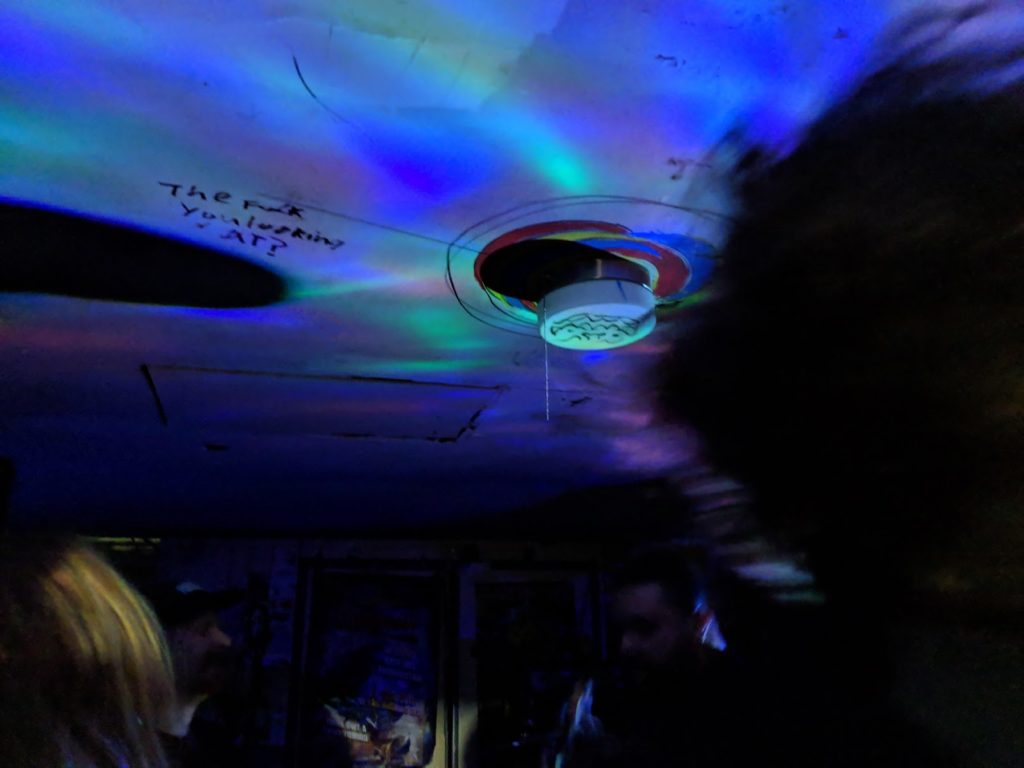 Well, I was looking at YOU, fucking ceiling writing guy

So, my journey was a success. House shows are always so much fun and this one had a great night of diverse sets. I’d make that drive again and I’ll be trying to catch all of these bands whenever they pop up. Or maybe this was all some crazy dream of dark hollows and loud noises. My advice? Find a house show this weekend and get there. Also, pick up the new Multicult when it comes out this summer and the new Eye Flys when they drop it.