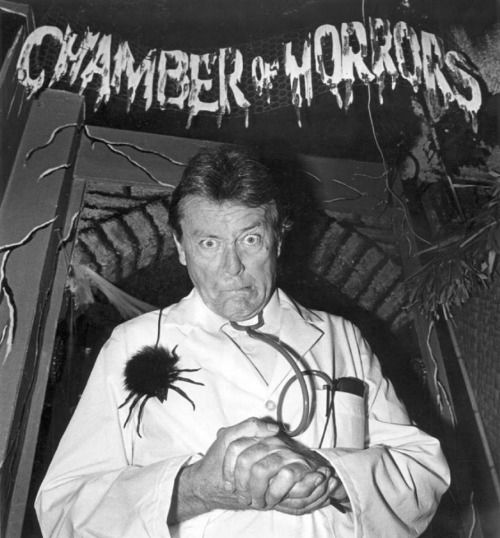 I was perusing the city of Somerville website a few weeks back, when I noticed an item which caught my attention. It seems the city’s Memorialization Committee, whose main purpose is naming streets, parks, and buildings around town, was looking for a few new members. Now, I’m a very busy man. I don’t have the free time or energy necessary to join the committee myself… but I do have three words I’d like the committee to take very, very seriously: Bobby. Boris. Pickett.

Bobby was born on February 11th, 1938 in (you guessed it) Somerville, Massachusetts. He lived in my own neighborhood of Winter Hill and attended Somerville High School. His father was manager of the Somerville Theatre, which is where he developed the love of classic horror movie monsters which would define his later career trajectory. After a stint in Korea with the US army, the would-be actor and impressionist found his way to Hollywood, where in 1962 the Monster Mash was unleashed on an unsuspecting world.

The single was released by Gary S. Paxton, who by then was already novelty music royalty for having recorded the sublimely silly “Alley Oop” with the Hollywood Argyles in 1960. The two recruited now-legendary pianist Leon Russell and Ventures drummer Mel Taylor, backup singers the Blossoms including the great Darlene Love, and a few other crack musicians. Thus Pickett’s backing group the Crypt Kickers were born. They wrote the song in about an hour, and recorded it in a few hours more. Pickett impersonated not just his namesake Boris Karloff but also Bela Lugosi, Peter Lorre, and others with uncanny precision.

The Monster Mash and its accompanying album The Original Monster Mash were an instant success in the US, although in the UK the song was banned by the BBC for being “too morbid,” if you can believe it. However, this was just the beginning of the Mash’s long and storied history.

The Monster Mash has since been covered by Bad Manners, Ill Repute, Faster Pussycat, Bootsy Collins, The Misfits (naturally), Bonzo Dog Band, the Kids of Widney High, and Sharon Needles. Titans of terror like Vincent Price and Zacherle have put their own spin on the song, as have classic children’s characters like Goofy, The Count, and Alvin and the Chipmunks. The song is even in the repertoire of those archetypal paragons of Americana, The Beach Boys.

After its initial peak at #1 on the charts in ‘62, it charted AGAIN in ‘70 and ‘73. It inspired a virtual cottage industry of other Halloween novelty songs, almost all of which are wonderful in this humble monster kid’s opinion. Two movies have been named for the Mash: an animated direct-to-video feature and the Rocky Horror-influenced 1995 live action musical, written and directed by Toy Story creators Joel Cohen and Alex Sokolow, which featured Full House’s Candace Cameron-Bure alongside John Waters regular Mink Stole, Jimmie “Dyno-Mite” Walker, and a mummy Elvis that predates Bubba Ho-Tep by a decade. In 2004, Pickett released a pro-environmental, anti-Bush version of the song called “The Monster Slash.”

The Monster Mash has been a graveyard smash across the span of several generations, but I’d be remiss not to use this opportunity to encourage my readers to check out some of Pickett’s other songs, which may not have the Mash’s cache, but are great in their own right. I’m especially fond of “Sinister Stomp” and “Me and My Mummy”.

Pickett passed away of leukemia at his home in Los Angeles in 2007. I don’t think it’s overstating it to say he had an indelible effect on how our culture celebrates Halloween and how we think about creatures like the Mummy, the Monster, and the Count. Also, his songs just slap. In an era where we are rightly reconsidering, recontextualizing, and in some cases straight up decapitating so many monuments in this country and around the world, I’d like to think a memorial to our local hero of harmless horror hilarity is something we can all get behind. Would some people see it as a little silly? Maybe. But we are the city who dedicates an entire day’s festivities to Marshmallow Fluff every year, so why not a celebration of the Mash? I’m pretty sure it would catch on in a flash.