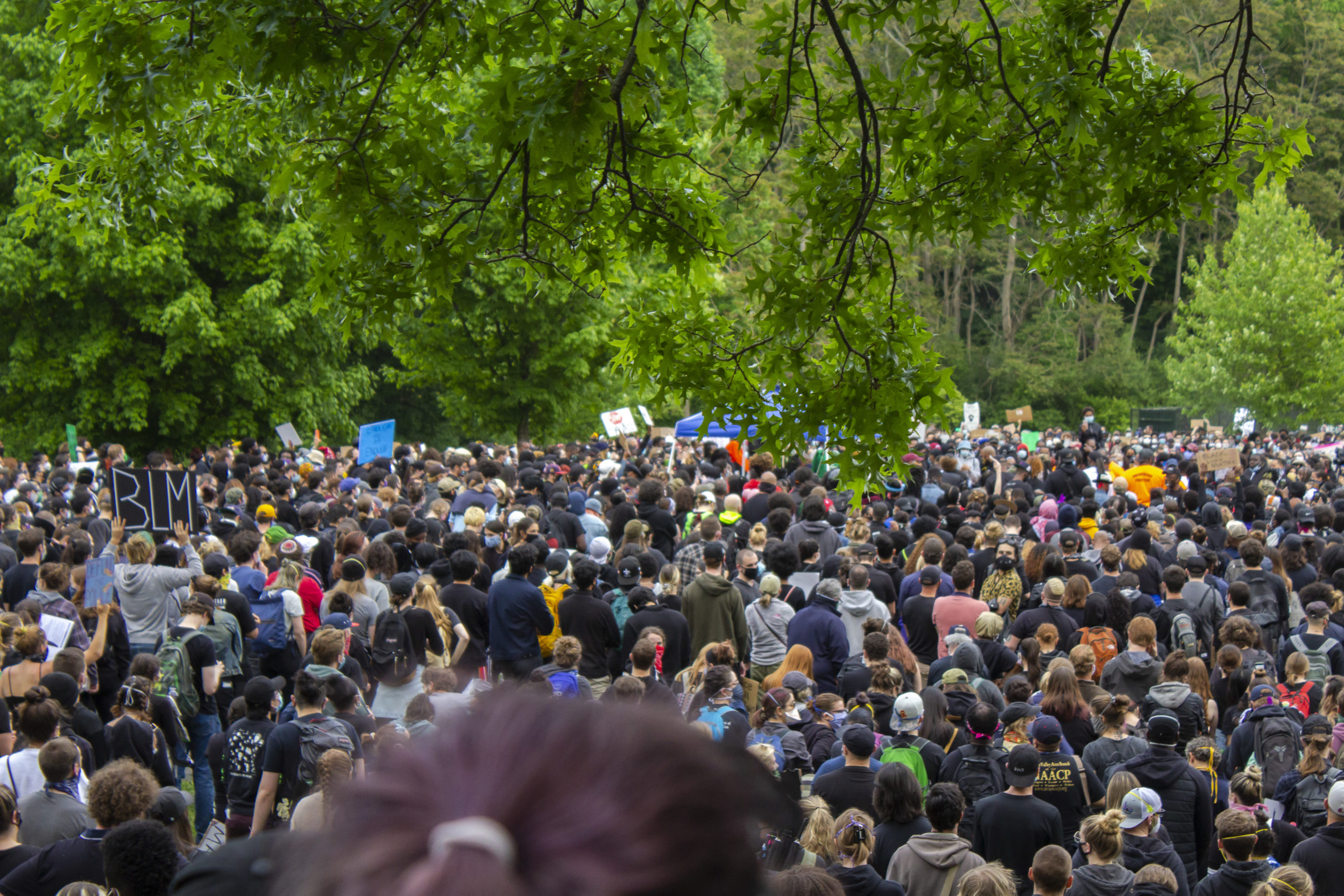 Nothing is more important at this time in our town, our country, our world’s history than the voices of our Black and POC siblings. While a great deal of editorializing, moralizing, and vilifying has been the norm for mainstream media, We’ve decided to take a different approach to reporting on the ever-important issue of Black rights and liberty. During the recent vigil held for George Floyd, Breonna Taylor, Tony McDade, and the countless other victims of racist police brutality and violence, we interviewed some significant voices found supporting and participating in the crowd. These are the words of just a few of the many who gave their time, their resources, and their compassion to make the vigil at Franklin Park possible, in spite of the event’s sizable police and military presence. 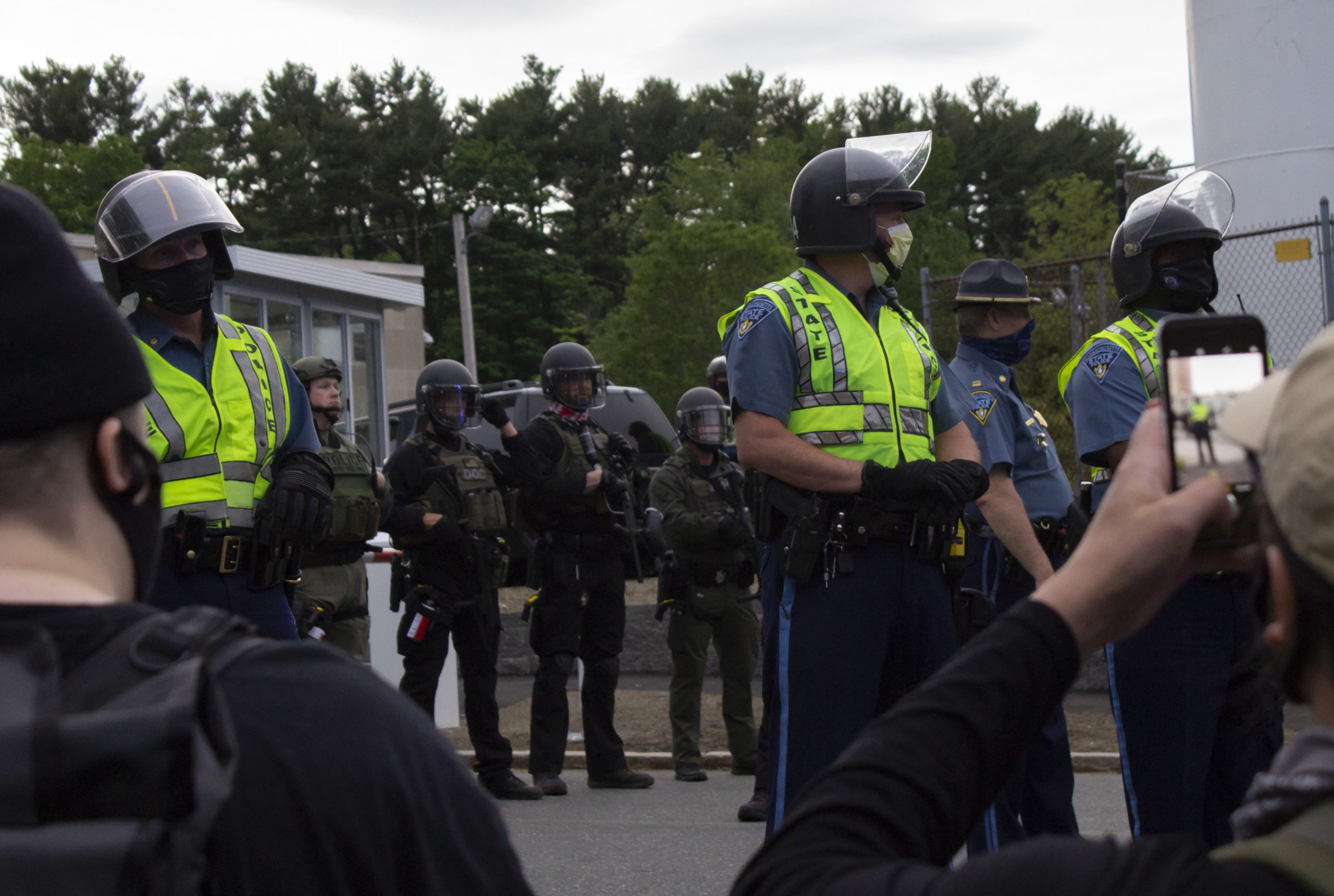 We start with an interview from Dr. Rand Nashi, MD, a doctor working in the Boston medical community who founded and managed the event’s primary medical tent. 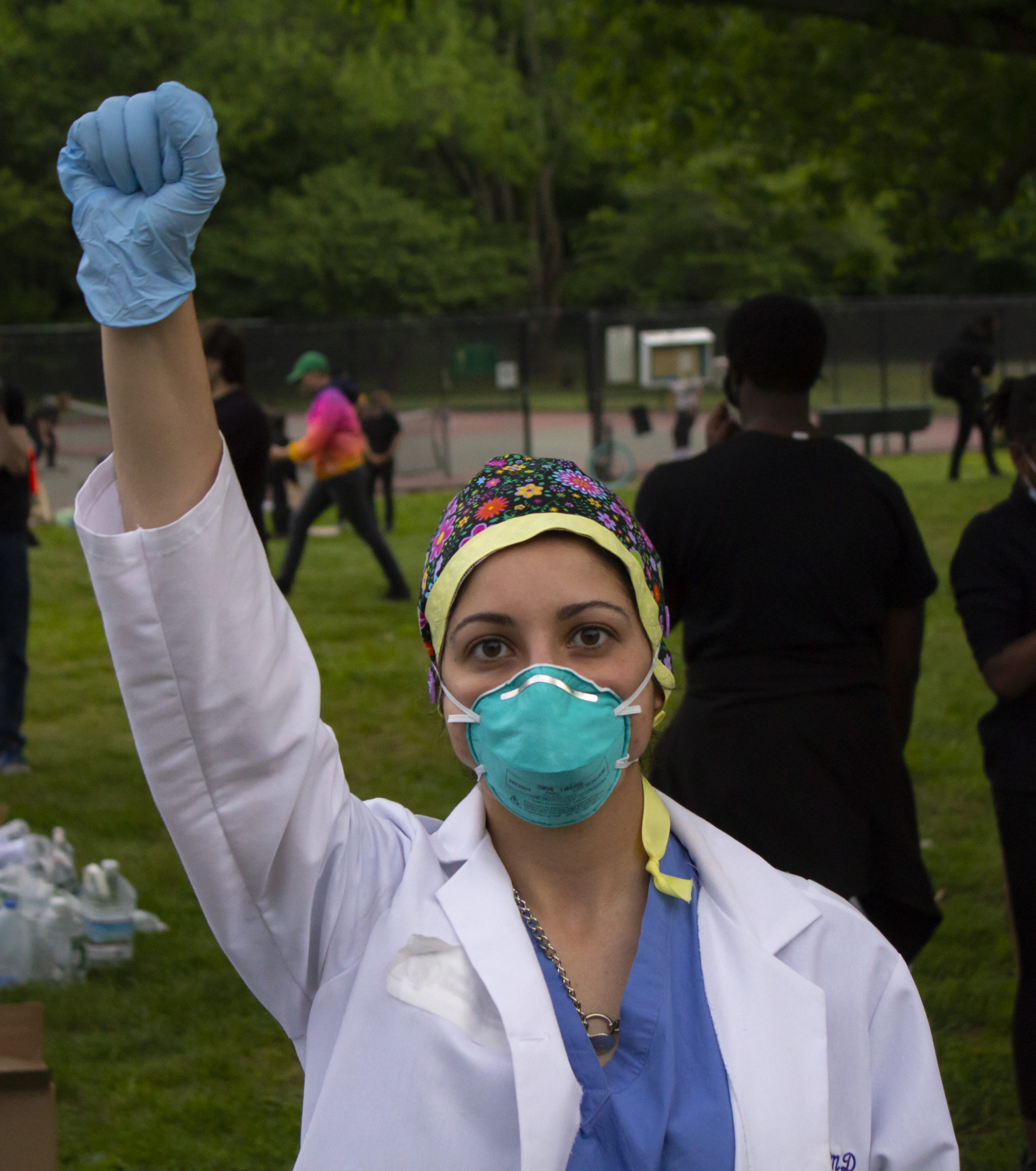 BH: Let’s talk a bit about what you’re all doing out here. As I understand it, y’all are a bunch of volunteers from separate hospitals?

Rand Nashi: Correct. This is actually a hodge-podge of advocates, doctors, nurses and EMTs, all representing various Boston hospitals. This ranges all the way from Beth Israel, to Boston Medical Center, to Mass General Hospital, as well as Brigham and Women’s. We’re very well represented and very grateful for the diversity of care here.

BH: Incredible. And what services are you all providing here?

RN: We actually have a pretty organized system here. We have water, snacks, and masks for the general public to be able to grab and go. We have a separate triage area where we take people’s vital signs and figure out what they need for care. We have two different first aid stations, as well as a trauma station between them. And then we have eye-wash stations with water, soap, and milk. All of this is supplied and overseen by volunteers from Boston’s medical community.

While talking with Rand was eye opening, revealing quite a lot about the extent that Bostonians with medical experience will go to assure the safety and health of their community members, her tent was far from the only medical station throughout the massive crowd. I stopped by LaQueen Battle’s station to get a perspective from another med tent on the other side of the grove. BH: So what is your specific role here?

LaQueen Battle: I’m just providing first aid services, being of the community. I’m also in the process of applying to graduate school for nursing right now. Boston’s been really good to me— I’ve been to over thirty different cities looking for work over the past year, year and a half.

BH: Do you want to talk a little bit about that experience? How do you feel it connects to today’s vigil?

LB: It’s been a struggle, but I came back here to Boston. I was able to find a bed to sleep in, and I got my faith back, and all this has been personal to me. People that are innocent need justice. Having said that, I have family that are in the military, and I have family that are police officers, so I do understand what’s coming from both sides. At the same time though, this movement needs to be forward. It needs to be led toward an action. It’s not going anywhere; there’s no action in this, d’you know what I’m saying? It’s a lot of energy, but the energy needs to turn into action, needs to turn into laws, or it needs to turn into voting power. When all this energy turns into voting power, then we can make a change.

But all this looting, all this running around—we’re not making a change right now. We need to actually turn all this young energy, this young involvement into positive voting power, so we can elect a new and a powerful president—someone in the White House, male or female, man or woman.

BH: To that end: you’re here providing first aid, providing what you can, providing energy, motion, and forward direction, but are you providing this independently? Or are you associated with one of the medical associations present here today?

LB: I’m doing this on my own, I’m completely out here by myself.

BH: And what compelled you to come out here and provide like this?

LB: I wanted to be involved in the community, and do what I can, use my time for something instead of sleeping all day, looking for a job, going to the unemployment office or whatever. I want to use this energy for something. I want to be involved. I really want to be involved and not be left out—not be counted out. D’you know I’m saying? I want to be involved and help my generation.  All these people are my age. I’m thirty-four, they’re young, but they’re all around my age, in their twenties, just graduated from high school, grew up with Obama. And a lot of these babies are nine-eleven babies. They just turned eighteen years old. I have a YouTube channel where I talk about celebrating the eighteenth anniversary of nine-eleven; all the nine-eleven babies born September eleventh, 2001, are now of age. So pretty much, I’m just trying to do my very best to make this into a career, make this into the future, and do what I can to help out the community.

Across the crowd from LaQueen was Arira Adeeke, along with members from the cultural preservation organizations Seeds of our Ancestors and Sistahs of the Calabash. At their elegant booth, they sought to provide a more spiritual form of healing for the community. 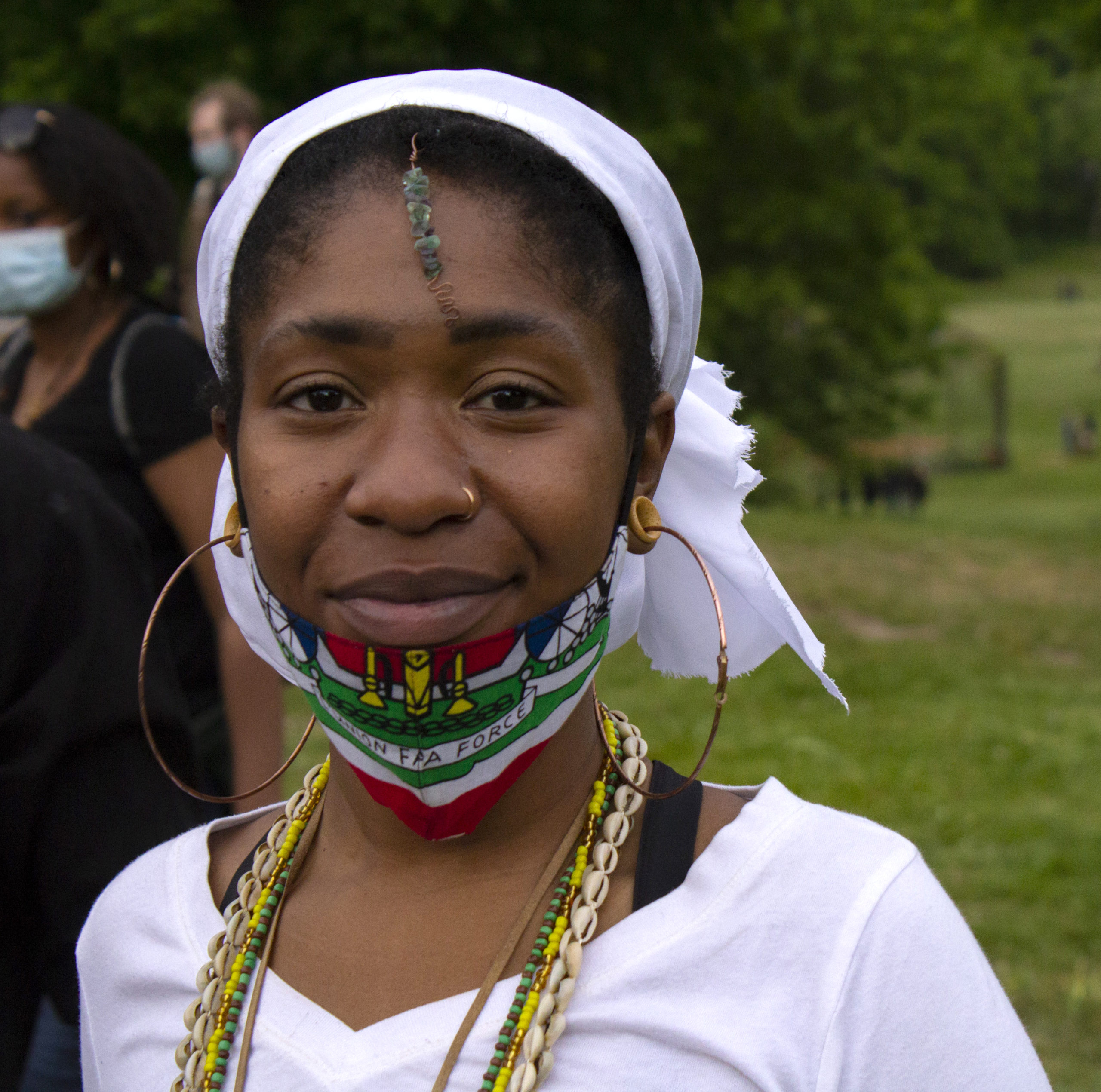 BH: So what are y’all providing here at the vigil?

Arira Adeeke: We’re holding sacred space. When we feel grief, when we lose someone in our community, we feel it in our bodies, and so what we’re doing as space holders, as healers is, we’re stepping in to intervene, and we’re declaring that we have a right to heal, and to feel, and to have that, you know, Aṣẹ. So aṣẹ is the universal life force. It’s a African word, it’s from the Yoruba language, right? And so we know that we wanted to bring that aṣẹ to this space, so that people can feel grounded and protected. So what we’re burning right now is cedar, and that’s what you usually burn in times of grief and trauma. So we’re just healing the broken heart right now, and just making people feel as loved as we can, helping them see as much as they can.

BH: That’s incredible! Are you guys associated with any specific organization, or is this an independent effort?

AA: Well we are, of course, in support with Black Lives Matter Boston. The majority of us is from Seeds of our Ancestors. I’m from Sistahs of the Calabash as well. And these are just two of the organizations here. One of the women helping us is from BLM; we’re all here in solidarity. We know we need each other, so all our medicine is coming together to create one container.

The amount of giving, of peace, of love present at the vigil was incredible, but the final interview of the day provided an artistic contribution to the crowds that was deeply felt and sorely needed. I managed to grab an interview with local hip-hop artist and hometown hero, Brandie Blaze, just after she had finished a powerful set in the rain to a soaked, but captivated, audience. 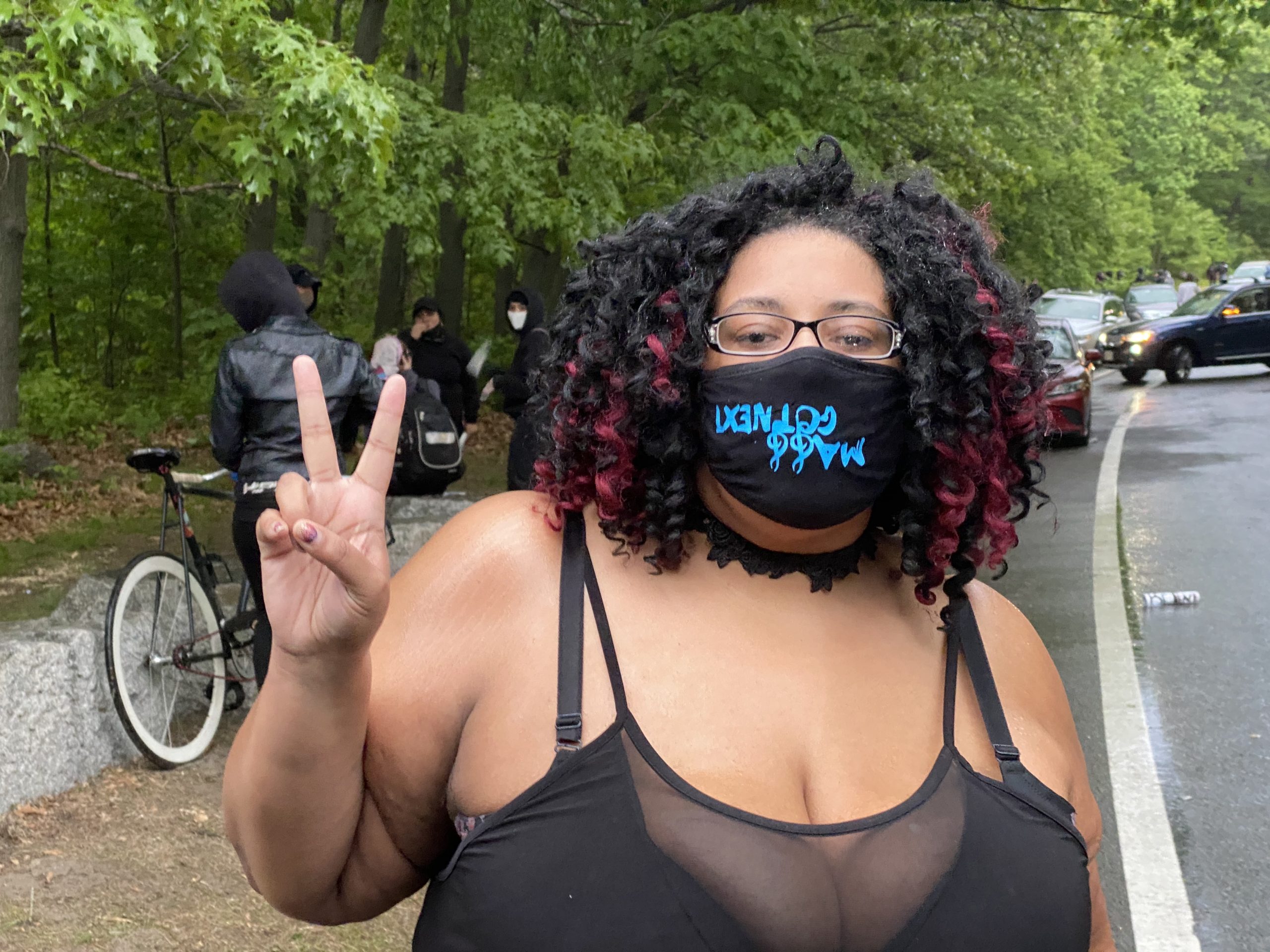 BH: Can you tell me a little bit about what you’re doing here today, what you’re providing for the community?

Brandie Blaze: Yo, I’m just out here supporting my Black and brown sisters and brothers—like, I’m from Dorchester, the march is in Dorchester so I gotta be here.

BH: True! So that performance you just did, was that a freestyle? Some tracks you already had?

BB: No, it’s actually a track on my album… I actually normally do pussy poppin’ rapping, haha, so when the organizers hit me and they wanted me to perform I was like “Y’all tryna pussy pop at the protest??” I was like, “What y’all tryna do?” But I just got on the mic and I just said what was from my fucking heart cause I knew that was what I was gonna do. Like, this shit is real, this ain’t a show for me; this is fucking real. This is my block, this is my neighborhood, and I’m just trying to keep it a buck out here.

BB: That’s just real; I don’t give a fuck. You can’t expect people not to be angry, when we’ve been dealing with all this shit! We’ve been dealing with all this fucking oppression, this pain, this violence… Like, what the fuck do you expect? What do you expect when people are fucking angry? When people get angry, shit get broke. I don’t give a fuck.

BH: So how do you feel your music fits into all of this?

BB: My music… Like I said, I do pussy poppin shit. But I feel like there’s a place in the movement for all music. There’s the music that motivates us to get in movement, there’s the party music, there’s the pussy popping music, there’s everything, and it’s all a part of Black culture. And one thing I’ve noticed about these protests is like, yo: We’re fighting against oppression but we’re also celebrating Black culture, and we all belong to that. So, when you talk about Black culture, yeah, all that music belongs to us! People come in and they enjoy it? That’s great. But all of it is a part of our culture. So someone that does a song like, “fuck the police,” someone do a song like “I’m bout to pop in on a handstand,” all that shit is our culture!

BH: Bless! Ok, two more questions for you. How do you feel about the silence from the music industry right now? About the people who are in power who are not speaking?

BH: I got one more question. Can you tell me about justice?

BB: Yo…justice is…the generation under me not having to move with the fear that I had. That’s it. I want the kids under me, not to be scared when they get pulled over. Not have to worry about where they hands is at when they get pulled over. Not get accused of bullshit they ain’t do. Like that’s all I want, and to me, that’s justice: when our kids are safe. And right now? They not.

Liked it? Take a second to support Fen Rotstein on Patreon!