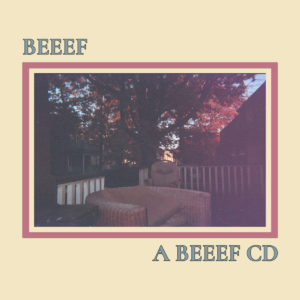 Boston melodic garage four piece Beeef dropped a stellar new album back in February of this year only to be screwed by mother nature when it came to sharing it with all of us properly. One of my favorite tracks on the record, “Airplanes”, is getting the video treatment courtesy of Andrew Gibson and we get the privilege of premiering it right here on the Hassle! The song, which meanders between sway inducing basslines and dreamy aught-rock maintains a strong vibe of cruising around in the dim summer light making it a perfect groove for this time of year. The video which places the band drifting through the sky on top of various airplanes, scattered on runways, flying through the air on a stationary bike, and wearing all black juxtaposed against a clear blue sky seems like an overt choice considering the song’s title. But the slowly shifting clouds flow splendidly with the track’s vibe and the green screen “high school AV club” aesthetic melds perfectly with the band’s unique version of outsider pop. Things close out with a slightly hidden image of Jerry (look twice or you’ll miss it) and a closing kaleidoscope of psychedelia to keep things weird at the end and remind you that Beeef is here to turn heads and not just commit to the obvious. Check out the video below and don’t miss them on 4/8 at the intimate Lilypad with Andy Sadoway (Bent Shapes) and The Owens. It’s 10PM – it’s $10 – it’s all ages – it’s Beeef……vegans welcome.