2018 was a jaw dropping year for new and DIY visual art in Boston. First of all, Brain Arts Org (the folks who run Hassle and everything we do) acquired Dorchester Art Project in late 2017. We’ve hosted a handful of art exhibitions including one residency, a juried group show that featured dozens of artists, and a solo show and a group show of Boston-based graffiti artists. On top of that, we continue to house artists studios in the space around all this action.

Enough about ourselves though, we give ourselves enough love. The rest of the city was up to equally exciting things. The following is a list of the years best art events, happenings and exhibitions IMO. So much has happened this year that I am absolutely sure I missed or glossed over some great stuff. Email me at [email protected] to add to the list. 2018 was the year of community arts in Boston, let’s make this list reflect that!

I need to see other people suffer to exist at all. A torch. A torch in their hearts. with Rudolf Lingens

Gallery 263 in Cambridge was transformed into both and dreamscape and a living room for Rudolf Lingens. A color palette of coral pink and electric blue filled the space, a sculptural vignette of a pink fireplace was flanked by molding on one side. The space was speckled with taxidermy coyotes and expansion foam forms. This exhibition was a part of the Curatorial Proposal Series at the gallery — check out their program, the spring 2019 deadline is soon on January 6th, 2019. Photos of the exhibition can be found at the link below. 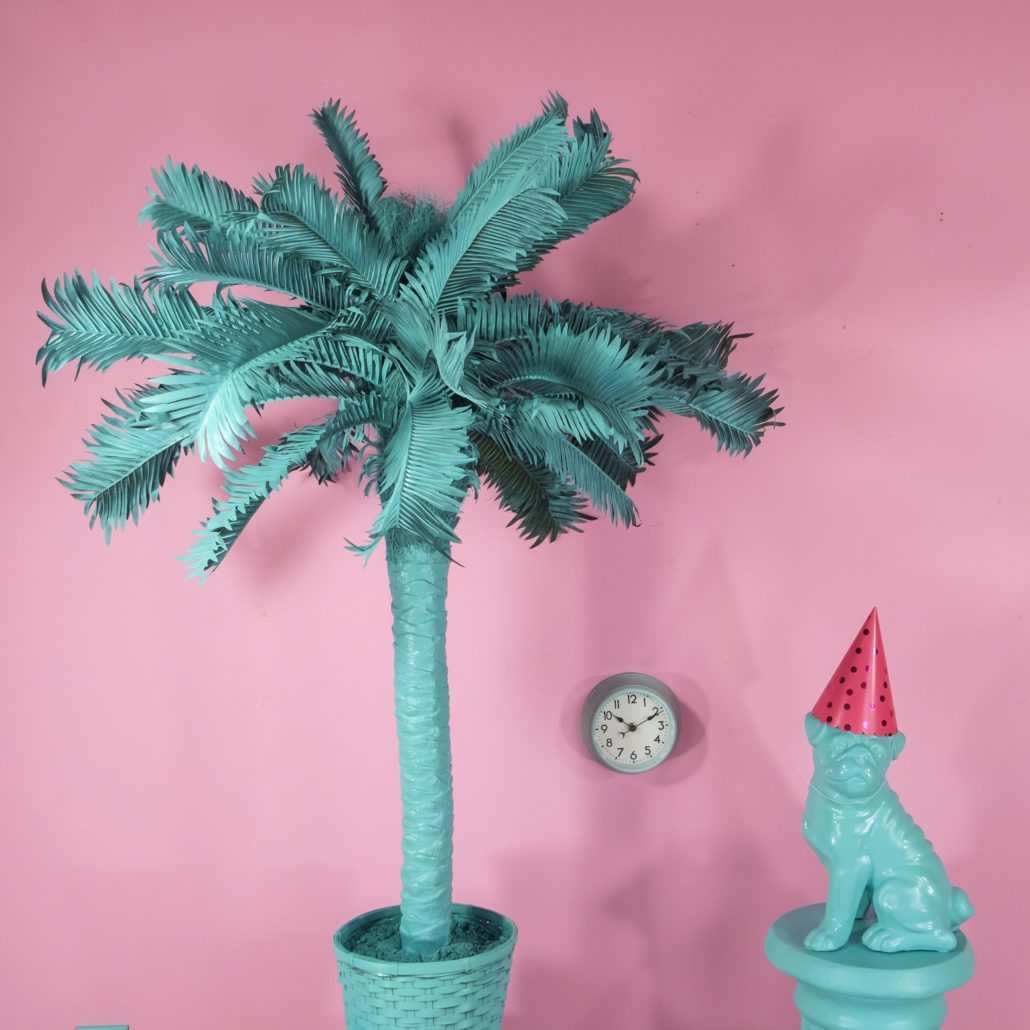 Run of the Mills at BCA – Rainbow Collapse

Anya Smolnikova and Jared Williams presented this playful experience in a Boston Center for the Arts Run of the Mills residency and performance. In a video interview, Williams describes the work as a work in a progress, the sharing of a piece that is raw, totally new, and off-the-cuff. Viewers/audience members/participants are guided through sections of the gallery that represented places in our imaginations, and were reminiscent of our relationships to technology nature and each other, and how these relationships affect one another. After an hour or so of exploring the screen shrine, the birch forest, and numerous other places of reflection, the experience turned into a performance where the rainbow people guided us through their poetic story through dance and movement.

See this excellent video from Linden Tree Productions on Vimeo

By using familiar imagery in branding, Juan Obando had us reflecting our roles in capitalism and the privilege and exploitation it causes. Think streetwear brands like Supreme and Nike, and our excessive communication through emojis, all parodied into blunt irony. Obando used mimicry and humor to perpetuate discussion on consumerism. Distillery Gallery was engaged by his pieces in different ways. A clothing rack was perpetually spinning, activating hung t-shirts with the Nike Air Jordan logo, giving the illusion that the logos were in fact making a leap. There was a table of iPhones giving you the option to press and activate a snapping hand. These snaps of of approval are like our tendency to continuously “like” in the online space. Art in the Age of the Internet 1989 to Today

Boston was able to give itself a little pat on the back when it finally leaped into the 21st century with its institutional exhibitions. We are a city fixed on history and tradition, and though our industry is heavily tech influenced, our artistic taste didn’t show it. This changed when the ICA shared the largest internet-art based exhibition New England has ever seen. We got the privilege to see some really cutting edge power-house artists who are changing the ways we think about material and craftsmanship. The ICA teamed up with other institutions in the area to provide tech-based art exhibitions. Let’s collectively shed a tear as we watch our little Boston-baby-institution takes its first steps into twenty-first century contemporary art. Welcome to the new canon!

Exhibited at the same time as Art in the Age of the Internet, Before Projection looked at the history of tech-based video art. All works dealt with the monitor screen, no projection, no high definition, just how it used to be. The gallery was filled with the high-pitched hums of old TV screens and the use of the box-like forms varied widely from artist to artist.

One highlight from this exhibition was Ernst Caramelle’s Video Ping Pong, in which two monitors on the same stands that traveled down school hallways, bringing Bill Nye to the eyes of young learners, flanked a ping pong table. Single players were depicted playing on either monitor, the spatial orientation of the installation made it seem like the players on the TVs were actually there, playing each other. This exhibition was a great, and free, counterpart to the ICA, overall giving a well-rounded experience of video art throughout the second half of the twentieth century. Both in June and September.

In 2018, we welcomed Boston Art Review to the city’s scene of arts publications. We are so excited for this super polished and well thought-out publication. It includes art and writing from artists, curators and creators from around the city and beyond. They’ve also hosted a couple of killer parties to accompany their issues’ releases. One was at one of our favorites, Distillery Gallery, the other was at an urban beekeeping facility! Make sure to follow them on instagram and check in on their website; they just released their call for submissions for their third issue so be sure to look into this opportunity! http://bostonartreview.com/submit/

Beth Plakidas’ work is playful and full of color. This particular installation was a chance for the Somerville-based artist to really grow her work. Tarps and 2x4s were erected to create a structure in the middle of the Allston Gallery. It looked like a bright blue playhouse. Assemblages of textures and photos lined the bottom facade both inside and out of the structure. When you look closely the collages are composed of photos of dogs. At this point it becomes apparent that this installation is a reflection of memory and loss. One you pass the threshold of the structure’s small door, you are confronted with shine-like displays of dog fur and teeth. Being in the structure overwhelms you with the change of light, and the structure’s ability to feel larger on the inside with its tall ceiling.  This exhibition was an exciting change of pace for a gallery that it typically more conducive to traditional wall-hanging works. I wrote about the exhibition when it was up, you can read more about it here. 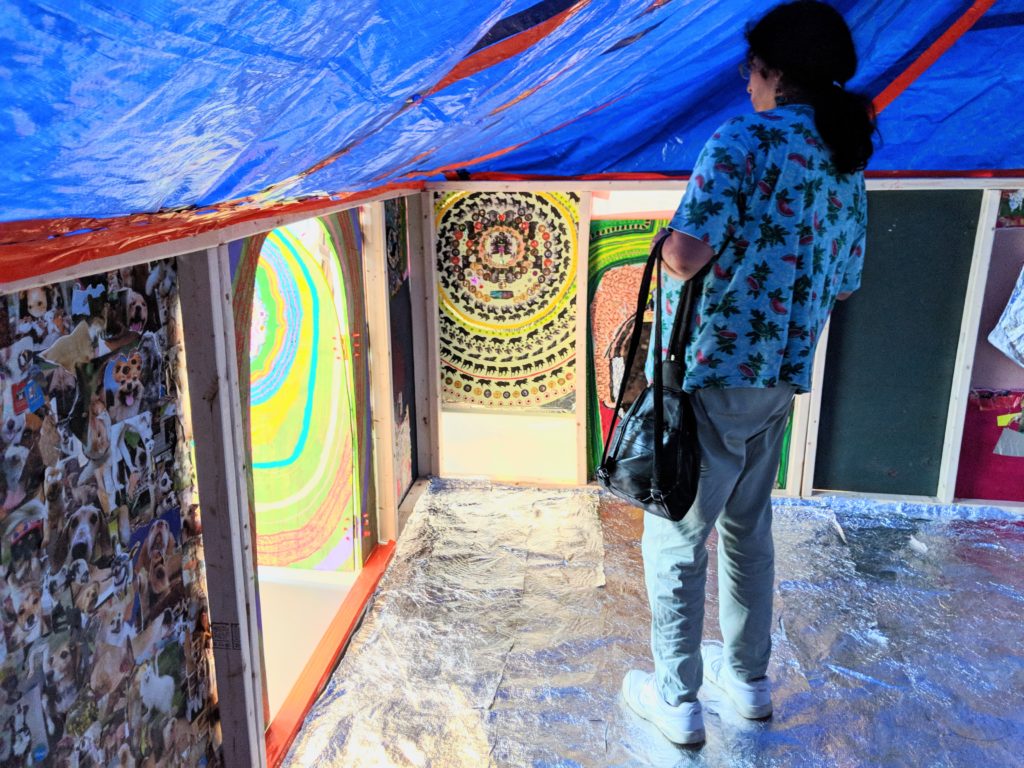 at Spaceus (Roslindale and Cambridge!) September 21th to October 7th

First of all, the advent of Spaceus was an overall amazing thing to happen this year. Boston needs more platforms for making and sharing art with a broader public, and the team at Spaceus did just that! They started their project in Faneuil Hall, and then took over the Roslindale Substation during the summer. This is where they had the exhibition Mapping Worlds, organized by Isabelle Beavers. Roslindale hosted the exhibition for a couple of weeks, then it moved to their Annex space in East Cambridge, which was brand new at the time. Spaceus did a great job bringing ideas, concepts and creations across the city, interweaving artist communities. Mapping Worlds included performances by Lani Asuncion as part of her Human Garden series, and works by our previous artist in residence –  Allison Maria Rodriguez.

You might be able to tell right now that I have a taste for sculptural installations that resemble domestic shapes and orientations. I had the pleasure of running into Archambault when I was visiting BSG to see the exhibition, and I definitely got lucky. The work was a larger than life assemblage of all of the rooms that your parents tried to renovate. The title of the exhibition, 16 On Center is a direct reference to the distance that wall studs are installed. I was giddy for all of the composite woods and exposed fasteners. This exhibition had me like a kid in a candy shop. Archambault told me that a lot of the inspiration for the forms comes from her relationship with her father-in-law and his craft as a carpenter. She is striving for her own craft, while also always thinking of her own house and plans for it. Read this blog post from Amy and see photos of the work here.

Oklahoma met Boston during the month of September when Tulsa-based artist Rena Detrixhe was invited to Abigail Ogilvy Gallery. With her, she brought dirt from central Oklahoma that was ground and sifted through in her studio; it arrived as a fine red dust. In  the center of the gallery, Detrixhe placed, compacted, smoothed and imprinted in the dirt. Using stamps made out of the soles of shoes, the final product resembled an oriental rug. The presents of the installation brought you to focus — it made you think about different parts of the world, and how impressionable it can be. The gallery was open during the days that the artist was working on the piece, making it a performative experience. There is a timelapse video of the process on the gallery’s website, linked here.

Liked it? Take a second to support Chloe DuBois on Patreon!