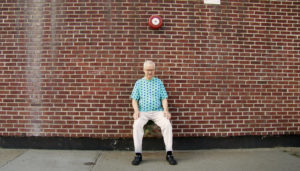 There is — and I hope no one minds my saying so — an obvious, if not particularly damning, irony in the celebration of Tony Conrad as a Great and Important Artist. Not that he isn’t one — if we believe in the existence of such creatures, Tony Conrad, who died in 2016, a few months more than a year ago, certainly deserves his place among them, not to mention such concomitant tributes as the one going down this weekend at Le Laboratoire Cambridge.

But do we believe in such things? Did he?

“I wasn’t interested in propagating the culture of musical composition as a professional undertaking. Whereas people like Philip Glass and Steve Reich and La Monte Young, they studied composition and wanted to be big composers. I wanted to end composing, get rid of it. I wanted it to die out.”

Back in March, just before Tyler Hubby’s documentary, Tony Conrad: Completely in the Present, premiered in New York, William Robin wrote a piece for the Times, entitled “Tony Conrad Was Such a Good Minimalist, He Was Almost Forgotten.” We don’t have to regret Conrad’s emergence from obscurity — which occurred in the 1990s, largely thanks to the efforts of the Table of the Elements record label and the enthusiasm of such then-young experimental music luminaries as Jim O’Rourke and David Grubbs — to acknowledge that it has its perverse side. While it represented a happy ending for Conrad personally, it was also one more nail in the coffin of the idea, though not of the artifacts or practices, of the avant-garde with which he’d long identified. The iconoclast had become an icon, and he’s likely to remain one for an indefinite posthumous perpetuity. Hardly the worst thing that could have happened.

Of Conrad’s art, whether musical or cinematic, we can only be vouchsafed brief fragments; if you are already familiar with his work, such snippets serve as synechdoches. If you’re not, they are mere teasers that can’t possibly suggest the intensity of being immersed in one of Conrad’s eternity-simulating, physically overwhelming musical performances, or in one of his retina-bombarding flicker-films of the Sixties and Seventies, beginning with, you guessed it, Flicker (1966), which shares the bill this Sunday not only with the doc we’re discussing but also with a solo violin performance from C. Spencer Yeh.

But if there is some inevitable incompleteness and reductiveness in the film’s depiction of Conrad’s work, the man’s personality is on full display throughout, and it’s a pleasure to be around. Affable, sardonic, bemused and knowing, Conrad steals his own film. He never lacked for strongly held convictions, and his storytelling, so compelling and enlightening regarding the milieu of early minimalism, experimental film, and proto-Velvets goings on in downtown NYC, becomes, if anything, even more so when he turns to less well-documented aspects of his life, such as his long tenure as a media studies professor at SUNY Buffalo, and his energetic advocacy of cable access television as a tool for democracy.

Fluxus, Warhol, Jack Smith, LaMonte Young, Lou Reed. These are but a few big names from a heady time — a time that seemed to promise an end not only to the tyranny of big names (die, author, die!), but maybe, just maybe, to discrete time itself: Be here now, and stay there forever. But many of the artists involved, upon becoming big names themselves, grew protective of their images and cagey about their legacies. LaMonte Young, the only member of the Theatre of Eternal Music ensemble (of which Conrad was a regular member, along with Angus MacLise, John Cale, and Marian Zazeela) to record the group’s sessions, so utterly betrayed its founding principle of author-less, communal composition that he refused to release or even to share the tapes, hoarding and lording over them like a jealous dragon.

So Conrad devised, after decades of frustration, a work-around: he grabbed a violin (probably a pretty crappy one, as was his wont), convened a new version of the old ensemble, recorded several discs worth of his “old” music, eternal as ever, as best he could reproduce it from memory, and had Table Of The Elements put it out as a box-set under his own name. Do the resulting masses of growling, writhing, overtone-overcome sound really belong to him? More than they belong to, say, me, or you, or the universe? It’s debatable. But markets appear to be forever, and Conrad did what he could to make “his” music available to everybody, which, in the absence of a revolution not only musical but economic in nature, is about the best we could hope for. And it’s pretty great.

Conrad’s films, beginning with “Flicker,” flicker — light, dark, on, off, an open/close case. His drones flicker too, only very slowly, and for a very long time. “Yellow Movies,” which are actually monochromatic paintings built to fail unto flaking over a fifty-year wallspan, don’t so much flicker as fade. To paratalk one of the film’s talking heads, “Yellow Movies” was a kind of apotheosis, a cheeky endgame for so-called structural filmmaking. Conrad’s iconoclasm, which can seem so ferociously focused and physically overpowering in his music, often assumes a goofy, even joyous cast in his films of the 1970s.

What we’re doing here is celebrating fifty years, or closing in on sixty years, of Tony Conrad. One interesting aspect of Hubby’s documentary is its total absence, excepting a tossed-off disparagement of Mozart or two, of any reckoning with the music or film that preceded Conrad’s own. You might say, hey, come on, its subtitle is “Completely in the Present,” after all. And that’s true. But this film isn’t — as how really could it be (a perennial sticking point for the pretensions of quasi-mystical experimental art) — completely in the present. It’s a contemporary artifact, a state-of-the-art iteration of a longstanding, not particularly underground fascination with a particular, historical underground: the heroic years of experimental art, cinema, and music in downtown New York City, up to and including their Velvet culmination.

But it’s mostly because Tony Conrad himself fascinates that Hubby’s film does, too. He was never timeless, always timely.

Screens Sunday, 7/23 @ Le Laboratoire Cambridge
Part of an evening of tribute to Tony Conrad
Presented by Balagan Films and Non-Event