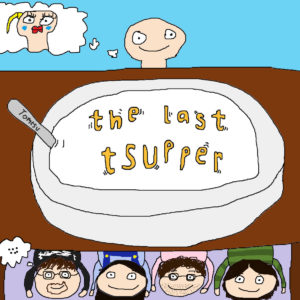 A perpetual fear I’ve had describing Tomtsu to friends and fellow music aficionados alike has been that their age might all too soon outrun their musical greatness. By this I mean that I hope the energy and excitement that come from the fact the band made this energizing and exciting music so young doesn’t ever render their work bland or—worse—out of touch. Really just what happens whenever an artist’s age becomes a part of their draw. Usually just an expiration date.

Not here. The latest release from Tomtsu—a (what I’d best describe as) spacey-math-indie rock act composed of four recently graduated Brookline High School students—keeps their explosion-on-the-Boston-music scene legacy alive and then some. It dispels any notion of “shooting-star” status and solidifies Tomtsu’s status as four familiar faces in the Boston music scene.

The four-song, just under twenty minute EP, the last tsupper, yet again vitalizes their never-too-distant ability to captivate and entrance. While three of the tracks are entirely new cuts—several of which (I think, having been there) were premiered at their Brookline Teen Center gig last month—the third track, “Can You Hear My Thoughts?”, was released in March of 2020, right before the pandemic hit. I think—hopefully without being self-indulgent—some of my words from WGBH in December 2020 might do well here to describe how important the track seemed (and was) right in the midst of the worst part of the pandemic:

“This song is perfect. Or, at least, it feels that way, contextually: It was released March 5 of this year, less than two weeks before the pandemic took full hold of the country and the world… recorded a song that feels at once ethereal, beautiful, and somber, the lead singer asking throughout: ‘Can you hear my thoughts?’ Of course, this felt fitting having to, in early March, wave goodbye to an old-time and brace for the new. As we began to burrow into quarantine, this song kept bumping around my head… ‘Can You Hear My Thoughts?’… offers not so much an answer as it does a reframing of the question.”

Tomtsu can do it all. Ricocheting from what feels like truly epochal music to self-conscious, half-anxious humor on the EP. What makes the above about star-status and reliability feel OK to say is the general comic attitude on the last tsupper. I mean, just look at its title; paired with songs titled “Give Me Spirit Cereal. No, I Don’t Want That!” and “This Is Milk”—both of which largely follow the blueprint of the more ambling tracks off their semi-self-titled 2019 release, The Only Members That Show Up, alternating between funk-jazz improvisation and spacey atmospheric explorations that approach shoegaze. There’s no doubt the release, while still maintaining the experimental sensibility and genre-blending courage of their earlier releases, hopes to bring a lighter air to their overall sound. (It is after all much more mature and shrewd to see bands eschew artistic “refinement”—whatever that means—in favor of a good dose of self-deprecation.)

The EP’s last track, “(Still) Waiting For You,” ends the release in a characteristically Tomtsu way. The song remains somber throughout, a brooding meditation on a lost—departed?—loved one. “You’ve been gone far too long / Left me blue, but I’m still lost in you” the song confesses,

But the song’s being somber doesn’t mean—necessarily—that it’s in any way low-energy. If anything, the track is a catharsis, a roaring scream at the end of such a short yet poignant and encapsulating EP. That the EP was released in late May, in what is beginning to feel like the end stages of the pandemic (at least in the US), feels fitting.