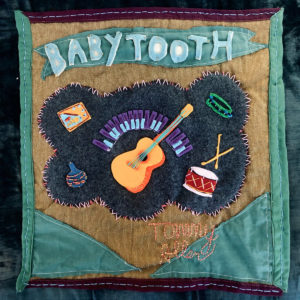 After a four-year hiatus, Providence’s own Tommy Allen finally resurfaces with a rejuvenating collection of psych-rock-indie songs on his new LP, Babytooth.

The ten songs on this album illustrate a range of musical imaginings, from the more straight-ahead acoustic singer-songwriter vibes of “Tremolo Sun” to the dreary Pink-Floyd-esque track that is “Half Moon.” There are songs with foundations in guitar, some built with layered voice, minimalist tracks of piano, and others with coursing electronic vibrations that establish themselves in the undercurrent of a song that was otherwise acoustic and demure—it’s a trip, something wonderfully planned and written out by Allen and brought into gorgeous life in his collaboration with a variety of other talented musicians.

Allen has a history of involvement with bands from the MA/RI area. He formerly performed as bass player for Doug Tuttle and also co-starred in the folk-inspired psych-pop band Drug Rug with Sarah Cronin. Doug Tuttle reappears here with credits for mastering tracks on Babytooth and some drumming work, his name on the project just one among many familiar faces.

Allen’s experience in music certainly pervades every element of his solo production. There is no evidence of wasted space, all of the ideas not fit to pursue probably having been curated by years of trial in songwriting. The first track, “Scared to Let it Go,” is a candid expression of anxiety exasperated by trilling and sometimes pizzicato violins. The percussion here includes snaps and something like a woodblock, which helps to elevate the simplicity of the 2/4 drumbeat. It’s a lovely introduction to Allen’s world of sounds, and portrays an anxiety that, I think, is necessarily dispelled by the end of the song (at least because the listener knows at this point that what they’ve got their hands on is of an uncommonly high quality).

Of the whole collection of sounds, “Tremolo Sun” stands out most to me. It accomplishes everything that you could want out of a mellow pop-rock song. The rising chord progression immediately implies movement to another section, which creates a sort of felt tension that seems necessary in an age where literally millions of other potential artists digitally battle for an audience’s attention. This hook, in combination with the vintage backing vocals, an excellent bass tone, and a placid interlude with chimes and synths, creates a versatile, well-rendered song, with intangible qualities that I can only provide for in urging you to listen to the music yourself.

Though it strikes into somewhat new territory for the artist, Babytooth clearly wears its influences. If you’re interested in late 60’s Beatles, Pink Floyd, Ween, Elliot Smith, or any of that amalgam you will most definitely enjoy Babytooth, since Allen has an understandable infatuation with some of these sounds. Yet, somehow this LP manages to avoid retroism of any kind. Allen’s songs remain unique in a way that appears natural, as if the outward expression of one’s idiosyncratic personality through noise were an innate ability given to everyone. The patchwork album cover appropriately resembles the sensation; it appears that what we experience on Babytooth is more than a collection of songs and more like a bunch of pieces of a person ripped up and stitched together in order to be viewed by an audience, post-mortem.

While Allen’s last solo release, Sea of Same, featured many of the same strengths in its songwriting, the collaboration on the new LP really allows some of his musical ideas to acquire a fullness that was missing before. The mixing and mastering of Babytooth is a step above as well – it sounds radio ready in a way that the rough edges and simulated tones on Sea of Same just couldn’t emulate. The progress is heartening; now we just have to hope that we can hear some of these live soon (and won’t have to wait so long for the next batch of songs.)