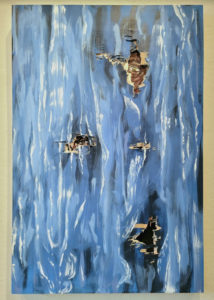 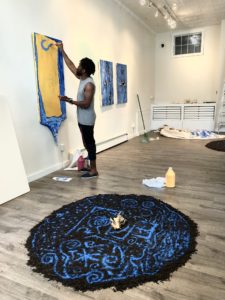 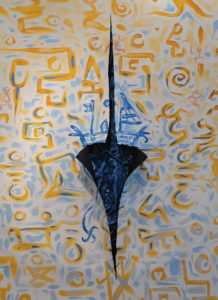 For his first solo exhibition, artist Mosheh Tucker goes deep. Created over this summer during his time as Gallery 263’s Artist in Residence, To Wade in Troubled Waters, a mixed media collection of oil paint, acrylics, and wood, recalls the transatlantic slave trade and the continuous relationships Black people of the Atlantic have with the ocean as a result of such unimaginable generational trauma. Exposed bits of wood in the work look like boats from a distance, but moving closer reveals intricate faces–they actually represent Black faces under the waves.

The topic is personal for the artist, who describes himself as African-American with Haitian-American heritage. I asked Tucker about how the residence facilitated his creativity, several specific elements of this work, and areas we could peel back culturally.

BH: How was the Artists in Residence program helpful in creating this work? How did this program impact your practice (what routine did you usually follow)?

MT: Throughout the residency, I’ve been able to expand certain techniques and approaches I developed over the last year. The residency gave me the space and time to digest the concepts I was exploring. It was different because I was in the gallery making work, this was good because I could set up the show while making the work, and difficult because of how precious we consider gallery spaces. I didn’t want to get as messy as I usually get.

Boston Hassle: The press release says you preferred the translation of your pictographic African-Atlantic script to stay hidden. Why did you make that choice?

Mosheh Tucker: For a couple of reasons; I want the viewer to recognize it as language, and form, so what they mean as pictographic characters matters more. I do a lot of writing, and that part of my practice is very personal, and hidden. Much of what the script translates to comes from this writing. I am not one-hundred percent opposed to the viewer translating the script. Honestly, if they really wanted to, they can, the key can be found on my website.

If the viewer goes that route, and takes the time to translate it, then I guess they deserve to know to some capacity. It’s also interesting because some of my work that contains the script utilizes more of its symbolism than what they represent individually as letters. [Someone] might find a hidden message, or some random letters, because that particular piece utilizes the symbols.

BH: We often [mistakenly] think of Boston as a place of historical equality compared to the South, and like to think that racism wasn’t much of a problem here, when that’s obviously not true. Why was it important to create this work in this city and interrogate our seas’ relationship to slavery?

MT: My desire to cover this subject was personal–for my own growth, and as an exploration of Black people of the Atlantic’s relationship to the Ocean, and Agwe, the Haitian Lwa of the sea [an intermediary spirit in Haitian Vodou], and his relationship to that history. I honestly believe that the south’s extremities do not exempt the North from any of its systematic racism. I’ve gone through a lot here, it’s been a constant barrage of microaggressions, and racism coming from people with Black Lives Matter stickers on their car windows. Also, let’s not forget there were many plantations here as well.

I can say that I do want to focus on my community, and our relationship with ourselves, more than our relationship with white people. Boston’s racism has made me consistently want to react against racism, and lack of representation, but centering this has caused more harm to me mentally, than anything else.

BH: How do you hope viewers walk away from the exhibit?

Anyone knowledgeable of Haitian culture and its religious practices will recognize a lot of symbolism representing figures like Agwe and Danbala.

BH: What do we need to peel back, like the surfaces of your pieces, as a culture/society?

MT: We need to peel back our desire to be considered progressive, and focus more on the work that goes into such a title. When looking around, “Progressive” seems more like an aesthetic, than an actual way of being. We can’t seek to seem a certain way, we should seek to be the things we claim to value.

Hello, there! I’m Leilah (stripper name: Penelope). I’m a writer, creator, host of A Stripper’s Guide Podcast, and the founder of A…