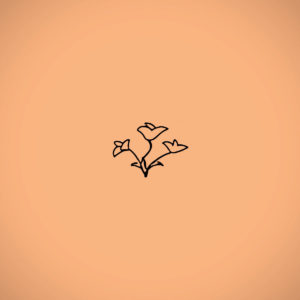 I first heard “Furrow”, the second single off Allston indie rocker Tiberius’ latest album, Lull, while on a Zoom call with a friend. I’d listened to “Pale Ale”, Lull’s first single, a couple weeks before, and found it captivating—impressive in its scope and layering—but I exercised cautious optimism, worried the rest of the album might not live up to the track’s hype. But after the first thirty seconds or so of “Furrow”, something clicked. My friend was mid-sentence and my brain went blank. “Stop, stop, stop,” I told them. “Gimme a sec.” I then immediately hung up, listened to the song four or five more times, and wrote about half of this review. (This isn’t off-brand; those close to me know I’ll often forget to eat all day if I stumble upon a new band I like.)

Perhaps what was off-guard-catching about it was that it was surprising. I guess it was the fact that an indie band was using the production methods of an electronic act that wowed me. The lone sound of a chopped up cymbal at 0:27 and 0:32 gives off vague jungle vibes, and the syncopated, out-of-focus hi-hat rhythm starting at 0:38 sound eerily like Person Pitch–era Panda Bear. (Or the looped, harmonic glitchiness circa 3:12.) This is what I’m talking about. But it’s not surprising for Tiberius, aka Brendan Wright—plus a few backup musicians (but Brendan’s the “brainchild,” as their site says). Every track of theirs demonstrates an impressive level of production and songwriting know-how; their music—both now and historically—is tastefully maximalist, carefully done, and all the while almost humorously understated. 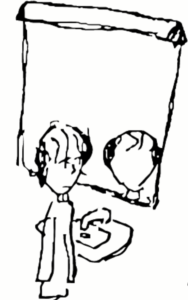 There’s something uncanny, almost paradoxical, slightly misleading, about the album’s title. Lull feels nothing like its title; the album is captivating, exhilarating in the way music is when you find it late at night and it keeps you up, begs biting-into. Above anything else, though, it’s an album full of transitions—both literally and figuratively.

“Lull explores concepts of self-hatred vs. self-love, the complexities of transitioning between youth and aging, and the power of the pen and expression,” Wright said in an email. “I wrote and recorded the project in the years between transitioning from college into this sort of weird and confusing stage of young adulthood that has only further been complicated by this strange year.” 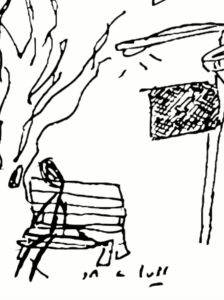 Tiberius, here, is either being excessively modest or fittingly honest. The album’s songs sprawl and meander, abrupt (though always fitting) stylistic shifts abound; Wright’s songwriting ability shines through. Fitting for the chaos of the last year: Narratives that become bigger than themselves, acts of mythologizing the minute, treating lived experience as something akin to an epic poem. Five of the album’s eleven tracks clock in at near-or-over six minutes long. Songs veer from hi-cut acoustic strumming to wall-of-sound screeching, Wright wailing over it all—and then, elsewhere, Tiberius’ characteristic orchestrated cacophony collapses back into the sound of a crowd chatting before a show.

The album dwells less within the verse than it does perfect the late-night rant. Its lyrics often wax stream-of-consciousness, seldom ranting, often painting; on “Pale Ale”, for example, a sprawling meditation on adulthood, backed by a lone, somber organ, later joined by an  unrelenting full-band roar: “You broke down my door while my roommate was puking / There was beer on your breath and you said / That you wanted a dream that I had just a couple of times / I was scared and afraid and a little excited / My heart sank down and you slipped on the floor.” It is on tracks like this where Tiberius’ scope is seen most bluntly; it’s earwormy but not repetitive, imaginative yet not self-indulgent, beautifully written without being evasive. The ability of “Pale Ale” to string disparate tones, styles, and moods together into its multi-part structure is impressive; it’s on the way to being an anthem. (The drawings in Lull’s liner notes add to the whole atmosphere-building the album’s got going on. With the artist’s permission, I’ve scattered them throughout this piece.) 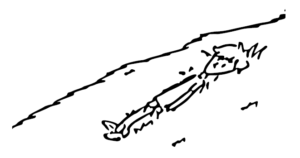 But a significant part of what makes Lull feel important is its applicability—something like that. The album feels relatable probably only to a small slice of the U.S. population, but at least from where I stand (as another college student, a soon-to-be grad) Lull feels at once a personal statement and an evaluation of the semi-paranoid, frenetic buzz that awaits our cohort of Gen Z once they hit the age range of 20–22. Wright is comfortingly, impressively, able to get out of their own head here; it’s a “This is how it is, this is how it’s been, this is how it’s going to be; what now?”. The album is both a capital-E Event in its own right and a plea to the world of confusion and overload for some sense to be made. (Despite occasionally corny lyrics elsewhere, like on “Brooksvale Park”—“And everybody’s freaking out about some sort of disease / While I figure out 19 means in which to get to you”—Lull remains strong in its overall narrative arc, its formidable sense of internal composition.)

Tiberius makes inroads with their 2018 A Depressing Optimism in the capacity of a bittersweet farewell: Lull is more imaginative, worldly, a lull perhaps in the sense that it ekes out its existence in the midst of a national quiet. “The First of Many Lasts” sounds like the end of a sentence, a ringing in the new year. Fitting it’s released now, early January. “All the same mistakes,” they lament on the track, backed by soft strumming, bells, and what sounds like yelling, all cut off after fifty or so seconds to make way for a smooth—though abrupt—transition into the first bona fide song, “MPHL”. Speaking of new years: “I’ve got thinning hair and rotting teeth / I kept all the insults you gave to me / I got all the conversations that we never had,” they near-whisper over lush, dense orchestration, a flurry of heavenly violins and synths. “They say life goes on, but I peaked so long ago.”

“In a lot of ways,” Wright said in a DM, “I feel like this is the only Tiberius project that feels truly relevant to me. I was/felt pretty young making the last ones, and it almost feels like I’m a completely different artist now… I wish this was my first album, if that makes sense.” 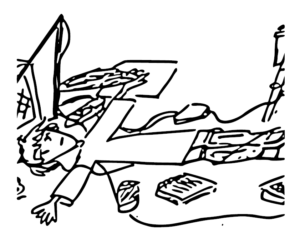 This impressive feel for both narrative and orchestration finds footing all throughout the rest of Lull: “Urn” is reverbed and energetic, devolving toward its end into noisy, cathartic layers of synth and vocals, and the title track, “Lull”, is a more upbeat, poppy cut that opines about anxiety and rejection: “It’s unclear what I fear / But I know that I’m scared”, they sing side-by-side with lyrics that situate the band thoroughly in Allston’s environs: “Waking up in the middle of Allston / I think there’s a flea crawling in my ear / Five streets from the center of Boston.” It’s difficult to address, in merely one writeup, how grand and far-reaching the album feels. (1,000 words is already pushing house style, I think.) Lull is intricately designed and thoughtfully executed from the minutest detail to the grandest narrative arc. Go listen to it. Right now. I’ll wait.

I’ve idly wondered for years now when a not merely pretty good but truly great indie band will emerge from Allston, with that all-too-rare feeling of promise that comes from the marriage of both a personal bias (I am partial to the kind of music Wright’s putting out) and—crucially—an impressive amount of technical and creative skill to actually back that hype up. What I mean is that this is scene-reviving stuff, fitting for the current (unfortunate) state of local music. I wouldn’t be surprised if, ten years from now, Tiberius gains an analogous reputation to Allston as the Strokes were to Manhattan. They’re already on the way there. If Lull lulls anything, it lulls the creative spirit of Boston indie music back to life. Lull is a promise of life to come—not so much what (or how) life will be once this is all over, but rather a hopeful and vibrant guarantee that we will live.