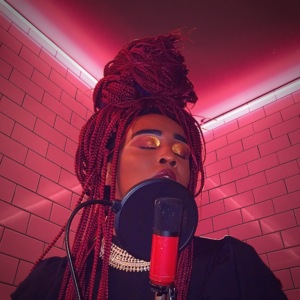 In late 2017, Jupiter Gray’s career was about to take off. After spending years refining her skills as a composer, producer, and performer, Gray was poised to sign a deal with a major record label. It makes sense that Jupiter chose such a pivotal moment in her life to announce her transition: this was her introduction to the world as an artist, and she wanted to meet the world on her terms.

Then, just when it seemed like it was all coming together for Jupiter Gray, the calls from her A&R rep at the label stopped.

“That was something that they didn’t really know how to market,” she says, recalling the radio silence she met after announcing her transition on Instagram. “Because you think, like, [in] 2017 we were kind of progressing toward the idea of trans artists and LGBT artists and stuff, but really, it wasn’t even where it is today in 2021.”

It’s impossible to overstate the hard work, personal sacrifice, and mental toughness it takes to reach that inflection point as a musician. For many artists, having their make-or-break moment taken away from them would be a career killer. “It makes you question, ‘Should I have been honest about who I was?’ And I felt like that was the most defeating part. You should never feel like that, but when your dream is that close, and [then] it’s gone, it’s like, ‘Wow, what do I do?’”

But the story of Jupiter’s career is one of bifurcated upward trajectories. First, from her beginnings performing skits with siblings for her parents in the family’s kitchen to rapping over Jennifer Lopez instrumentals on her brother’s laptop, attending Ohio’s high-profile Fort Hayes Metropolitan Education Center, and opening for Mindless Behavior. Then from her critically acclaimed, self-released 2018 EP Flowasis to her most recent single “Godiva Diva,” which earned her an interview with Grammy Magazine. It’s a credit to Jupiter’s talent and tireless work ethic that she’s gotten two bites at the apple when many artists barely get to shake the tree. 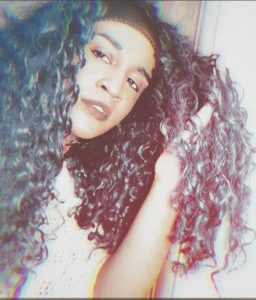 If you follow Jupiter on Instagram, you know that keeping a positive mindset is integral to her worldview. Between impromptu photoshoots of her fabulous, ever-changing hair and make-up styles, Jupiter creates and shares uplifting messages of self-empowerment and self-acceptance. Over the phone, she radiates warmth. A generous conversationalist, Jupiter’s charisma is undeniable. Whoever you are, she wants to pull you into her orbit.

“I want my listeners to take away that it’s OK to want more,” she says when I ask about what she hopes her audience takes away from her music. “I think in a world that’s told people so much, ‘Be grateful for what you have…because you never know what you’re gonna get.’ I never just settled. I kept going. And it wasn’t easy.”

Jupiter is almost four years removed from having her record deal retracted. Now signed to Trans Trenderz, a label that specializes in representing trans, nonbinary, and gender non-conforming artists, Jupiter has since performed at World Pride in NYC in 2019, recorded at Brooklyn’s prestigious Studio G, and earned copious attention from the press. All of this comes on the back of her self-released 2018 EP Flowasis, the record she was sitting on when her label ghosted her. With no other release options for the EP on the table, Jupiter decided to go DIY.

Jupiter’s raps are focused and topical, yet packed with clever wordplay and punchlines, qualities she attributes to her long-standing love of Brooklyn rapper and body positivity activist Angel Haze.

“Angel Haze is a phenomenal lyricist,” she gushes. “I have been influenced by her since I started rapping. She has a really good understanding of timing, rhythmic pace, diction, metaphors, punch-lines, all that stuff. Everything that I like, she does.” Jupiter also takes time to recognize Nikki Minaj’s contributions to feminizing rap music. “She was also very…explicit and pro-femme. I think before [L’il] Kim and Foxy [Brown], we don’t really have a lot of that. I think a lot of the female rappers at that time felt like they had to have kind of like a street edge or kind of rap on the same subject matter as the men that they were affiliated with or in groups with. And I think when Kim and Foxy Brown and Nikki came out, it was kind of OK to want to be feminine and want to be pretty and still want to rap.”

One can recognize Nikki Minaj’s influence on Jupiter’s work in her use of different vocal registers. Jupiter’s voice is elastic, and she likes to test her range. Indicative of this inclination toward experimentation, Flowasis begins with a piece of spoken-word poetry call “I Am A Woman,” a reclamation of Jupiter’s identity and power from those who tried to stop her career from coalescing. 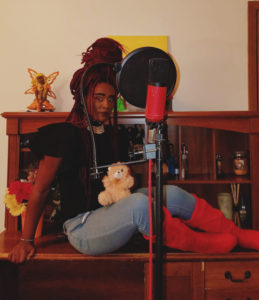 These days, Jupiter is anxious to get back on stage. She keeps busy during the COVID-19 pandemic by experimenting with new hairstyles, watching horror movies with her boyfriend, and working remotely with Sean McLaughlin at Rockland’s 37’ Productions on “Godiva Diva.”

“Godiva Diva” offers a propulsive mix of House and Afro Trap influences that Jupiter felt represented a shake-up of her signature sound. “I heard maybe 30 seconds of the beat and I was like, ‘OK. This beat is totally different than what I’m usually rapping over,’” she says. “I took the concept of, like, just me, just being kind of like ‘I’m Godiva.’ I’m like, you know, chocolate in skin color and skin tone. And…I can be kind of a diva. You like things a certain way.”

She also spends a lot of time thinking about where she wants to go with her art and career. A life-long fan of alternative rock, particularly the Smashing Pumpkins, Jupiter lights up when I ask if she has any plans to bring those influences into her music. “I wish I could show you some of the instrumentals I’ve had that I’ve wanted to work with. It’s just the most punk rock sound, like alternative, just guitars, drums, the fundamentals of alternative rock.”

Jupiter spends a lot of time collaborating with her label, as well, saying that appreciates the closeness of her team and how Trans Trenderz has invested in her personally as well as artistically and professionally.

“When I first signed… before there was any music talk, before there was anything to be released, they said, ‘Tell us about yourself,’” she recalls. “‘Give us a bio. What are some of your hobbies? What are your likes? What are your dislikes?’ These are questions that you hear at a job interview and you kind of cringe because you think, ‘You don’t care about these things, that’s not gonna help me at this job.’ But in this case, it did help me a lot with the label because they were able to get an understanding of who and what Jupiter was and [what] her sound was before we ever even stepped in the studio.”

It makes sense that the collegial vibe of Trans Trenderz would be a good fit for Jupiter, because for her, music has always been social. “I educated myself and really got invested in the competitiveness of rap,” she says. “Because I’m naturally a competitive person.” Even the creation of her stage name was collaborative. “When I was in middle school, I had this crazy obsession with dying my hair. My parents wouldn’t let me actually dye it permanently. So they bought me this spray can dye that you use for Halloween. So I spray it all in my hair in the morning, and it’s not, like, dry, so it mixed in with my natural hair color, which is brownish black…and it created this weird combination of black, this red-orangey color, and brown. And my friend said the next day…it looks like the color of Jupiter. Ever since then she just called me that.” She goes on to explain that Gray references her broad array of genre interests, styles, and musical abilities.

Commenting on the progress we’ve made societally in trans and gender non-conforming representation in media, Jupiter stresses the importance of visual media in normalizing trans and gender non-conforming identities, stating that progress happens, “When we’re able to watch music videos and see people be unapologetically trans, and it’s not used as a spectacle, and it’s not used to get viral attention, and it’s not used to say, ‘We have a trans person in our video.’ When it’s used in a way where it’s like, this is just another person in the video.” She goes on to emphasize the role that cis artists can play in creating broader inclusivity in the music industry. “I collab with a lot of male rappers, and they allow me to be overtly sexual on their songs. I want to normalize that. I’m talented, you’re talented, let’s make some art. And don’t try to dilute who I am to be more appealing to the audience. Just let it happen.”

Jupiter is currently working on her first EP for Trans Trenderz, Pressure. She’s also working on collaborations with a number of artists both on and off her label, and she’s excited about an upcoming collaborative interview she’ll be doing with her boyfriend, who appears frequently alongside Jupiter in her Instagram posts and stories.

As we close the interview, she offers to keep in touch and trade music, further exemplifying the generous spirit that I believe has played as big a role in her success as her persistence. Sill, it’s hard to hear a story like Jupiter Gray’s and not be won over by her tenacity and resolve.

Local cultural developer and Harlem-transplant, Billy Dean Thomas has been hyper-focused on expanding the quality and reach of Boston’s hip hop scene. …