Vincent Price was a fantastic actor. I think.

I include the qualifier because it’s very difficult for me to judge Vincent Price objectively. As I’m sure is the case for many horror fans, Price is to me such a comforting, avuncular figure that he practically feels like family. Even before I was old enough to actually see fright flicks for myself, Vincent Price was there as an ambassador of the macabre: as the villain in The Great Mouse Detective, as the guest host on my favorite episode of The Muppet Show (where his cover of “You’ve Got a Friend” is still one of the coolest fucking things I’ve ever seen), and as the host of the cheapo horror comp VHS my mom bought me, which served as a cornerstone of my nascent film education. With his soothing voice and charming smile, he was like a Walt Disney who would casually joke about poisoning his mother in law. I was probably one of the few eight-year-olds in 1993 who cried when Vincent Price died.

But Price was a fantastic actor. Even when the material was beneath him – which it frequently was, given his anything-for-a-buck work ethic – he threw himself into it and gave a capital-P performance. What Price understood like few others is that people go to movies for two reasons: to be scared, and to have a good time – and, more often than not, to get both at the same time. To that end, every single Vincent Price performance works on two levels. On the one hand, you have the camp, the scenery-chewing, the wry smirk to let you know that he knows how ridiculous this all is. On the other, you have the gravitas: the menace, the madness, the tortured pining at his dead wife’s portrait (for whatever reason, Vincent did a lot of that over the course of his career). Depending on the film, this ratio would often skew one way or the other, but both sides were always there. 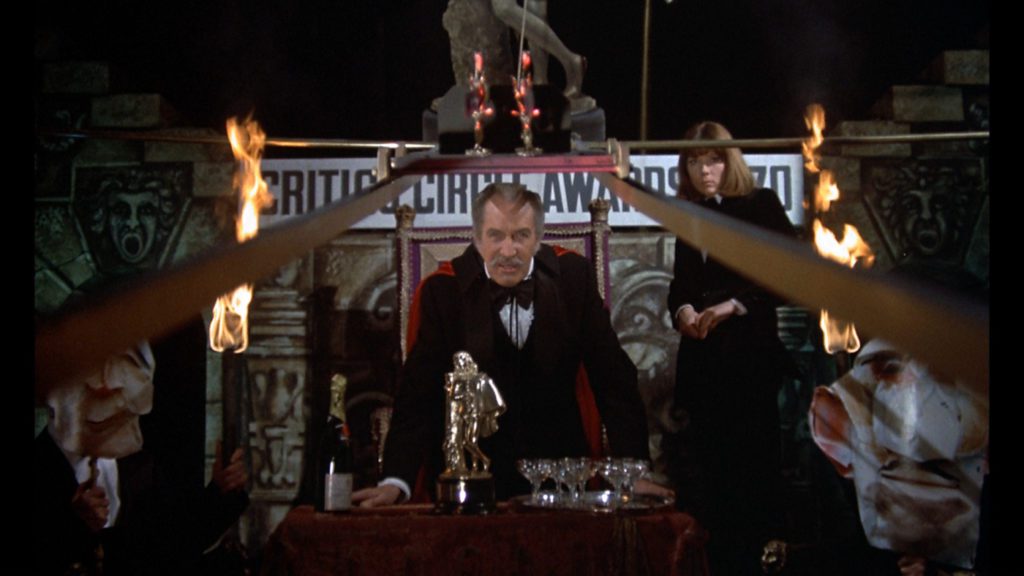 Theatre of Blood may be the all-time greatest showcase for both Vincent Prices. The plot is very nearly identical to Price’s previous hit, 1971’s The Abominable Dr. Phibes, substituting that film’s thought-dead, vengeance-minded scientist for a thought-dead, vengeance-minded actor, and theming its show-stopping revenge murders around the plays of William Shakespeare rather than the plagues of the Bible. But these changes, while slight, are ingenious: as a Shakespearean thespian, Price is allowed to run the full gamut of his skills. When Price’s unsubtly-named Edward Lionheart is on stage, he’s at his hammy best, playing the pompous stereotype well past the hilt. When he’s agonizing over his sorry fate to his legion of hobo henchmen (as well as his daughter, the always welcome Diana Rigg), he’s genuinely affecting, a madman convinced the world is against him. And when he carries out his fiendish deeds, the two sides come together: he gets to be funny and terrifying at the same time, while also reciting Shakespeare’s greatest hits!

Even putting Price aside, the movie is a gem in its own right. Where Phibes plays its premise for visually dazzling art deco surrealism, Theatre is gory, nasty, and hilariously mean-spirited. The murders range from the relatively straightforward (Price dons fencing garb and acts out the swordfight from Romeo and Juliet – in a ridiculous Swedish accent, no less), some are more abstract (Merchant of Venice’s “pound of flesh” is here taken literally), and some must be seen to be believed (I won’t spoil the Titus Andronicus murder, but it involves a staged cooking show and several poodles). And the cast of victims is a veritable murderer’s row (har) of British character actors, including Ian Hendry, Robert Morley, Dennis Price (no relation), and more, all camping it up as a consortium of hilariously awful theater critics, and most dying messily.

In the end, Theatre of Blood is a near-perfect to Vincent Price the actor: funny and scary, sympathetic and insane – and to hell with the critics who would belittle his accomplishments.