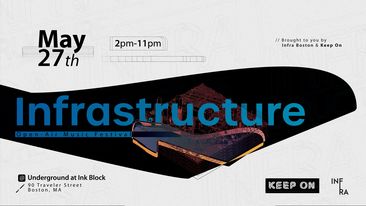 For those counting down to the long weekend this upcoming Memorial Day, Infra Collective and the Keep On crew have given the city a reason to start it earlier and fiercer with the third installment of Infrastructure, an outdoor musical festival. They’ll be combining prominent names in techno and house with a wide array of awe-inspiring mixed-media artists.

Be sure to come hungry for beats and eats, because starting at 2PM, it’s on at InkBlock’s Underground Park and will be catered by some of the hottest food trucks the city offers.

Music-wise, the festival’s two stages, hosted by Infra and Keep On separately, will serve as beat bumping stations for crowds orbiting between the unwaveringly punchy grit of techno and the groovy vibes of house, disco, drum-and-bass, and everything in between. 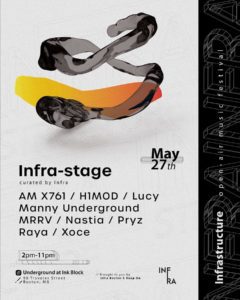 We have a robust local lineup of DJs from both camps. To name a few, techno DJ XAM761, who originally comes from Buenos Aires Argentina, fuses breaks and polyrhythms to surely make things hypnotically interesting. Drum-and-Bass local legend Lenore needs no introduction, but for formality’s sake, she’s the current resident of the 25-year-old Elements Thursdays at Phoenix Landing. Cakewalk, whose wide-ranging house vibes-deep, tech, dirty, you name it-have been heard live across both coasts.

As for headliners, this time around hailing directly from Eastern Europe, Nastia from Kyiv, Ukraine, and Lucy from Berlin, Germany, this festival is sure to deliver far beyond what anyone might expect.

Nastia has made quite the name for herself recently and shows no signs of plateauing any time soon. In the last year, her track-slinging skills have landed her collaborations with the likes of Hōr Berlin, Boiler Room, and Beatport—all of which are available on YouTube. Perhaps it was “Scary Beautiful,” a series of collaboratively filmed audiovisual projects, that hallmarked her prowess as an artist. Or maybe it’s the way she promotes other artists in her “True Talk” interviews. In any case, it’s evident that her passion for music goes far beyond the decks. Her fiery vibrance on stage as she dances and blends elements from breakbeats, hip hop, and drum and bass demonstrates this. And while she still has a firm grasp of the introspective side of techno, her set will have an immersive and lingering impact.

Lucy’s (AKA, Luca Mortellaro) long curated sound appears to stem from a process akin to world-building. Its organic resemblance and its smoothly evolving nature might cause one to forget that at its primordial roots, like all electronic music, it first requires human creativity behind all those machines. For crowds with just a fraction of an open mind, it’s not long before his mesmeric grooves and life-like textures can transport them elsewhere as they paradoxically dance not too far from whence his mixes began. His record label, Stroboscopic Artefacts, has been his platform for releasing these sonic soundscapes, each of which induces the listener to embark deeper, one track at a time. 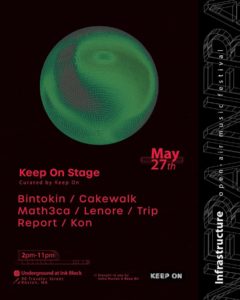 Visuals are a strong must for any festival, and infra refuses to disappoint by collaborating with those who have much of the most intricate kinds offered locally, including Theresa Silver (AKA: lumendrop), Erica Gaeta (ig: blktrmlne), and Allison Tenacious (ig: atanenhaus). And during one of the well-encouraged intermissions at one’s own liberty, feel free to take a look at some of the exhibitions and live art showcased by Baolong Song (ig: baolong_song), Matthew W. (ig: bymattheww), Kori Thomas (ig : quest.nine), Isoline MinijeongAlva (ig: littlewoogie), and Whale Girl.

Bringing global DJs and local legends together for the masses at an affordable price is a favorite pastime for electronic music collectives in Boston, and at $30-$40 a ticket, Keep On, and Infra’s crew kicks off the summer right on May 27th.

See you out there!

Liked it? Take a second to support Clyde Brown on Patreon!