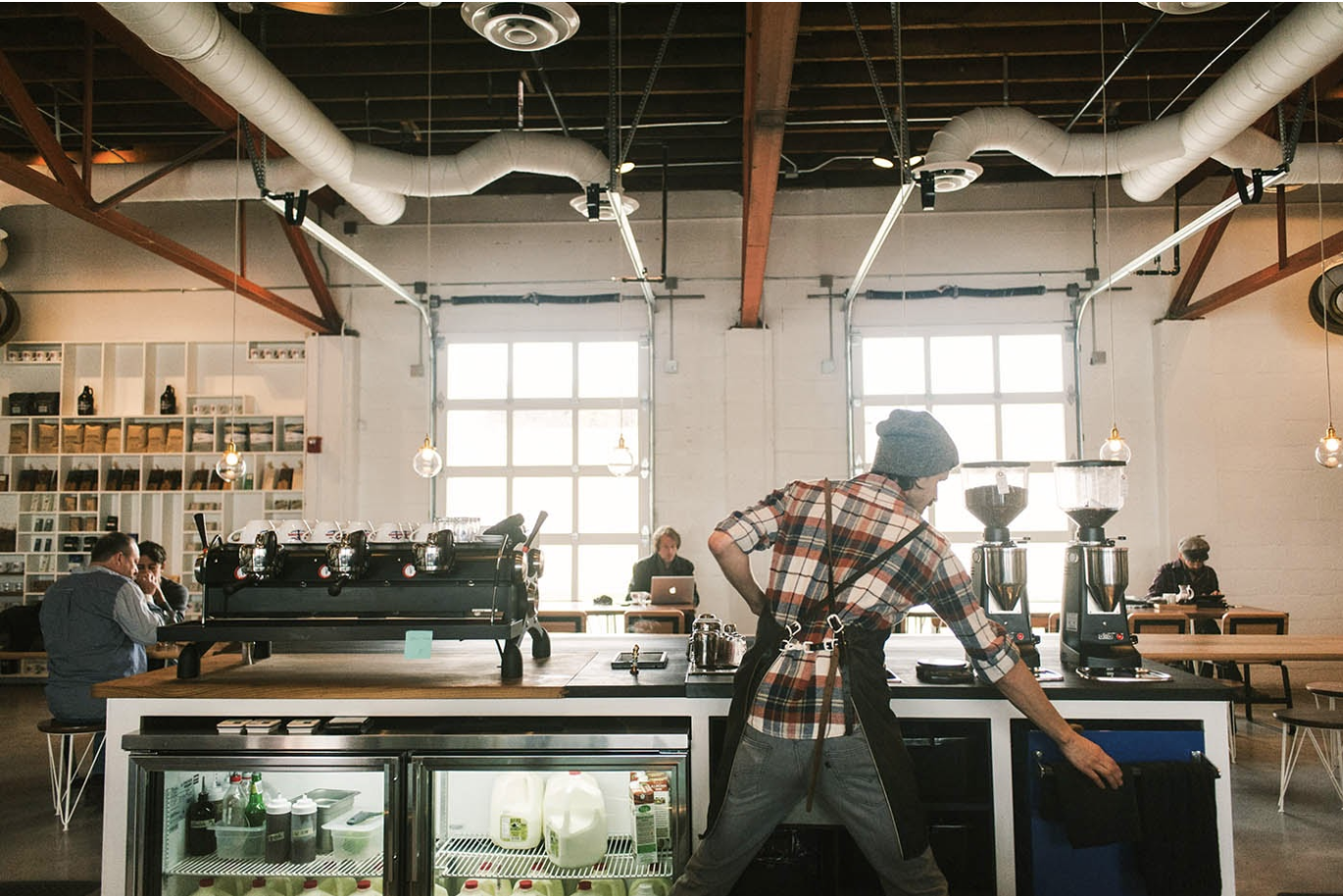 Photo by Will Vastine

At some point in the life of an average American, circumstances will call for us to work in a service industry job. Whether you’re arguing with a self proclaimed “coffee aficionado” about what a macchiato actually is, or you have to break the soul crushing news to a soccer mom that her coupons are expired, you know the humdrum happenings that make up a typical customer service workday all too well.

An entry-level customer service position is assumed to offer low pay, imbalanced hours, quick (and at times unpleasant) interactions, and a general sense of indifference to your personal skill-set and assets. As a result, people do not necessarily expect themselves to be fulfilled by the affairs of their typical day at work. Whether you actually like the job is subsidiary to merely having to be there, as there is a mentality of having a preliminary understanding of what you signed up for. That being said, is it really unrealistic to expect compensation that matches your efforts? How well can a company do in providing a fair wage that truly encompasses the extent of their employees’ labor?

Beginning January 1st of this year, Massachusetts has raised the standard minimum wage to $12.75 an hour, with tipped employees (i.e restaurant employees) at $4.95 an hour — as long as their earnings in tips add up to make $12.75 total. It’s understood that all employed by a minimum wage job will earn a little extra to keep up with ever-evolving inflation and increased living expenses. The concept of minimum wage is known to be contentious with many arguments against its efficacy in terms of helping to maintain subsistence, but in looking at businesses that provide a “competitive” starting pay, should we perceive them at a higher standard?

Recently, a bustling Somerville cafe announced to its patrons that they will be raising the cost of items on their menu to correlate with increased  pay among employees. Great, I thought after reading the placard proudly displaying this declaration. Finally more businesses are taking a step to improve their employees’ work-life balance! They definitely earned brownie points from me, and the news made the near $7 price tag of my latte seem a bit more warranted. At least it’s going to a company that cares. Yet, upon further investigation, I found that this wasn’t exactly the case at hand, and I still paid too much for my coffee that day.

Sam, a friend of mine who happens to be one of the cafe’s baristas, seemed more disgruntled than expected after I congratulated him on his increased pay.  I remember him remarking that some people at work are happy about it, and that he was not able to rejoice alongside them. Their exalted pay raise was in accordance with the new state-wide minimum wage increase, sitting at just under $13 an hour. This revelation prompted me to ask myself the following question: how much can we reward a company for paying a little more than what is required by law, but in turn is demanding tenfold of what the job description states?

“I should get more work from the company from the work I am doing,” states Sam, as they further divulged me on their specific grievances about the changes at work.

Unlike some of their coworkers who met the pay increase with excitement, Sam saw this shift in a different light, as they noticed subtle changes in how their managers approached them. As an example, they cited certain tasks that were typically allotted to higher positions now being put on the regular employees, as well as some manager-specific tasks such as delegating employee stations and acting as an authority figure in lieu of the actual managers. Sam suspects this is in part due to the pay increase, which emboldens their managers to simply ask more of them. That being said, the wage still does not surpass the minimum, but Sam’s managers “act like is a gift that should be so grateful for getting.” Considering that the hourly pay raise resulted in the cafe having to increase their menu prices, Sam also suspects the company is using the raises as a crutch to save face in front of disgruntled customers who may not be too pleased about their daily coffee’s new price. The true intentions of Sam’s managers can only be surmised, but Sam has certainly concluded that the dynamic has changed at his job. And this dynamic has posed some issues.

The harm is not necessarily found in the action of raising the wage, which poses a subset argument. It is the work culture that is subsequently bred of it, as the pomposity of a boss is empowered to demand more, all the while boasting benevolence, which only perpetuates the sense of disparity at work. The act of paying cents above minimum wage is not entirely condemnable to me, but the principle of pushing a narrative of indebtedness onto employees has led me to raise a brow; these types of behaviors can actively contribute to a toxic work environment, and I do not see fairness in paying less than an extra dollar per hour if the standard of labor will become exponentially higher.

This is something I have also experienced firsthand at a retail job. I worked at a rather popular clothing store that not only required the taxing exertion of “top tier” customer service, but also called for the cultivation of a service that required expertise and constant research. I was able to accept what I was making per hour,–which was .25 cents above minimum wage at the time–but with time I began to resent it more and more. A substandard pay did not seem worth my emotional labor and the constant refining of a skill that people can earn close to five figures for at other companies.

But one store meeting changed all of that. It was announced that we’d be earning an extra $2.50 per hour, which reinvigorated my dedication to the job and kept me in my position there. This pay raise was issued with the disclaimer that they’d be expecting “a LOT more” from us after throwing such a bone — and they did not fail to deliver on that promise. Similarly to Sam, I found myself doing the job of 4 different people at once, and it continued this way despite my grievances, as it was all under the pretense of an elevated standard to match the company’s generosity.  As a result, the job exhausted me to the point of losing all energy for the other aspects of my life: relationships, hobbies, social outings, self care, and the like. I was only able to find reprieve in tucking myself away in my bedroom to gorge my daily UberEats delivery. Not the best year for me, to say the least.

How much can we give to a job to which  we’ve only committed a small fragment of our personal selves? Take Sam, for example, who feels that if they do not overwork themselves, they will be responsible for the pandemonium that will transpire behind the coffee bar. Sam is not a manager, nor do they receive a semblance of manager pay, and yet they find themselves delegating tasks among their coworkers, operating two different factions between preparing food and espresso at once, and generally overexerting themselves to ensure the workday flows. And all the while, the employee feels the need to adhere to a sense of gratitude for a rather insignificant courtesy. There is something to be said about companies adopting the illusory idea that they are charitable business owners when their beloved staff still feels overworked and underpaid. Does the higher wage account for the baggage of complex frustrations and moral dilemmas experienced by their workers?

Coming down to the conclusion of this grumbling anti-capitalist monologue, I partly question the “point” of dissecting how suitable a standard service wage is if I’m just going to clock into my sales job tomorrow at 10:00 AM. There is futility in complaining about work when you take little action toward changing the situation; whether it be by speaking up for yourself, establishing boundaries on what you are willing to take on, or reevaluating if the position you are in is sustainable for you.

Oftentimes our sales jobs are the most viable option and are not inherently toxic. That being said, having an awareness of one’s worth and whether that worth is being exploited or overlooked is crucial, especially if one is not capable of simply just walking out of one’s job. I do not urge quitting on the spot if you sense ill treatment, as having a job is a societal imperative. However, I do urge challenging any potentially exploitative tactics and/or expectations at work by knowing your worth as an employee. Accepting additional stress is hardly worth any amount of money whether our employer raises our wages or not, as there really is no appropriate way to measure the physical, mental and emotional labor we experience in the hours spent at work.

“An enforced increase of wages…would therefore be nothing but better payment for the slave, and would not win either for the worker or for labor their human status and dignity.” Karl Marx